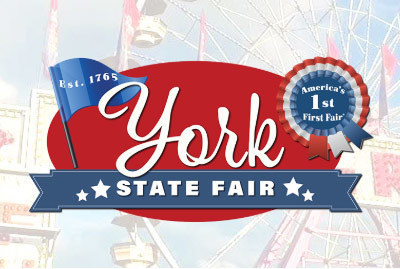 Along with its new name, logo, and dates the 2020 York State Fair will also feature a new midway provider. The York State Fair is excited to announce that an agreement has been reached with the James E. Strates Shows to provide the midway with its world class rides, and attractions.

Strates Shows is America’s only railroad carnival, traveling the United States for almost 100 years’ operating at large fairs and events. Strates Shows transports its personnel and equipment with 61 rail cars and 34 trucks. Traveling with the show are some 400 employees and families who operate its many rides, games and concessions.

“When I was informed in May that the York State Fair’s current midway provider would not be able to make the transition to our new July dates in 2020 and future years, my first call was to Strates Shows,” said York State Fair CEO Bryan Blair. “Strates has a great history in York having played the Fair from 1937 to 1947 and then holding the contract from 1950 until 1979,” added Blair.

“The Strates Shows midway will feature over 90 rides, games and attractions, including large European rides that have not been seen at the York State Fair” said Blair. “Plus, they will be introducing our fair guests to their state of the art FunCards electronic ticket system that allows barcoded tickets and armbands to be scanned at each ride,” he added.  Blair said that armband specials will continue to be offered every day of the 2020 York State Fair too.

“We are excited to have the opportunity to provide our midway at the York State Fair.  Even though it has been 40 years since we last played the fair, we still receive messages from our fans here asking us to return.  I am happy that we can finally fulfill these requests. The new dates fit perfectly into our annual route and we look forward to playing the fair for many years to come,” exclaimed E. James Strates.