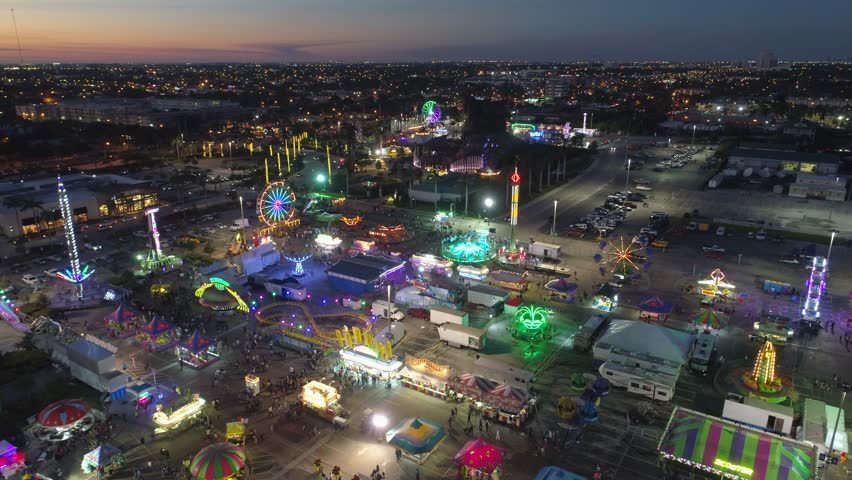 Things got a little crazy for Broward County Fair in 2017. Though it was known to be the best year for the event, marking the first time the fair had been put on in five years, the location at Gulfstream Park Racing and Casino drew too many people to handle and the crowds quickly became overwhelming.

Fair Manager Harlan Bast says the stores around Gulfstream Park were not happy with the congestion that flooded in. So for 2018, the fair moved to The Big Easy Casino, located along Federal Highway in Hallandale Beach.

However, it didn't work out exactly as planned at that venue either.

“The Big Easy Casino was a great venue with great people, but for the fair, the demographics just weren't right,” Bast says. It's been quite an uphill struggle when it comes to finding a location for Broward County Fair, due to the fact the fair doesn't have its own grounds.

“We would love to have our own place, and look for property all the time,” Bast says. “But finding 100 acres in the area is a challenge. It is very populated, a city with no raw land.”

Surprisingly, he says that Broward County Fair will return to Gulfstream Park for 2019.

So how will Bast and the fair board avoid a repeat of the issues that arose in 2017?

“We've taken some of the street this time, and less of the parking lot,” Bast shares. “We have more area than we did two years ago, and are going to use different parts of the property without hurting the businesses. There's also no racing this time of year, so it's very slow, and we will help promote the stores and bring people there.”

This time around, rides will also be spaced out instead of clustered in one spot, and store employees will have the opportunity to take advantage of shuttle services in order to avoid any inconveniences during the stretch of the fair.

“Hopefully we draw a lot of people like we did in the past,” Bast adds.

The cost of admission will be $10. Ride bracelets have a price range between $25 and $30. Special nights include senior day and military day, and there will be matinees on Sunday for the kids. The fair will also have extended hours and will remain open on select evenings as late as 1 a.m.

Some of the attractions on the agenda include a thrill show, jugglers, a variety of walk-around acts and performances by local musicians.

Animals are still not permitted at the fair due to regulations, but Bast says the fair board has tried to get kids more involved in fair projects and is doing a great job with its efforts.

“We would love to have animals, but it's a tough situation; we're not even allowed to have a goldfish,” he says. “But we don't look at it as a negative. That's just the way it is. There is involvement with the schools, art museums, horticultural and music departments. We are trying to have a big tent with film loops going that show kids things like where milk comes from, et cetera. Fred Brown, who in charge of the farm bureau and is the president, does a good job. The board really does a good job and tries to involve the kids.

“Growing up in the Midwest, I know what it is to see chickens and pigs,” he continues. “But it's a great fair people still enjoy and we have a great midway. We are focused 99 percent on midway and midway acts. It's a good and busy fair.”

There will be around 88 rides featured this year. Bast's company, Hildebrand Amusement Rides, is set to provide 32 rides. Modern Midways will feature between 10 and 20, Michael's Amusements will contribute between 15 and 20 and Deggeller Attractions will provide between five and 10.

Bast says one of the starring rides on the midway this year will be a Technical Park Street Fither 360 named the Hyper Loop, belonging to Modern Midways.

The fair will also feature between 20 and 25 food vendors and around 30 games. Bast says that there is now a goal to cut back on concessions in order to get rid of some of the “harshness” of the midway and promote a “softer” midway experience.

“We also use all local help,” Bast says when referencing some of the reasons the fair remains unique. “I have a lot of longtime friends helping with the fair, and we have a good time. Robert Briggs has been a great help on the midway. Michael Reisinger and Deggeller Attractions have all been supportive.”

Advertising still remains a key component in the fair's success.  Bast says social media continues togrow as a means of advertising and the fair now has a large social media following.

“We also have $500,000 in I Heart Radio on between 10 and 12 stations, with ads going from nine top radio personalities,” he says. “There's also a large presence with Comcast, and we are in negotiations with local networks such as ABC, NBC and Fox. We also use billboards and the Broward County Transit System – there are between 40 and 50 signs on buses. We also work with Domino's Pizza and put out ads in the local paper, The Sun-Sentinel.”

He adds that the local media loves to be involved and Broward County Fair also has a possible deal in the works with a metro Dade newspaper. which will be a great opportunity.

Gulfstream Park Racing and Casino sits in both Broward and Dade counties, which house millions of residents.“It's right on the line, and this is a great opportunity to pick up a lot of business,” Bast says. “We hope that this year everyone comes out to support the fair like two years ago.”