Will 2022's High Turnout and Spending Be Enough to save the 2023 Canadian National Exhibition? 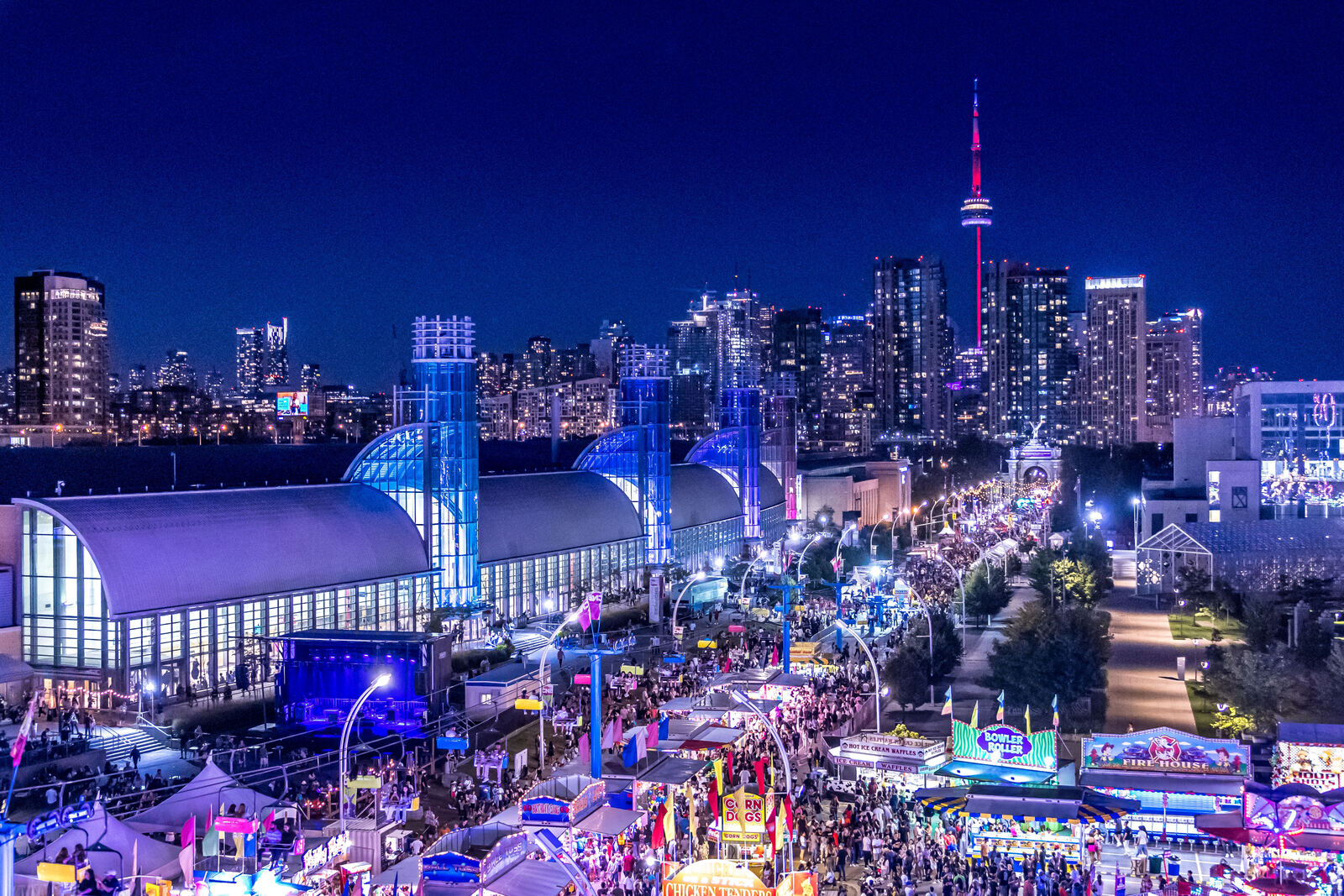 The 2026 World Cup hovered in the background of the comeback Canadian National Exhibition (CNE). The largest fair in Canada and #7 in 2019 of the top 50 Fairs in North America (as compiled by Carnival Warehouse) was at risk of being homeless and the global soccer match is one of a list of several factors the city of Toronto is taking into account while it determines the future of one the city's largest outdoor events.

Even though the “Exhibition” in Exhibition Place is derived from this iconic fair, the CNE is essentially a tenant of the complex, a publicly owned, 197-acre space with of a range of facilities from banquet and exhibition halls to stadiums and parklands. Of course, this vast 18-day fair occupies nearly the entire campus, plus nearby parks and parking lots, during its run. The CNE and the City of Toronto were set to begin (October 2022) negotiations that will decide the near and long-term of the fair. 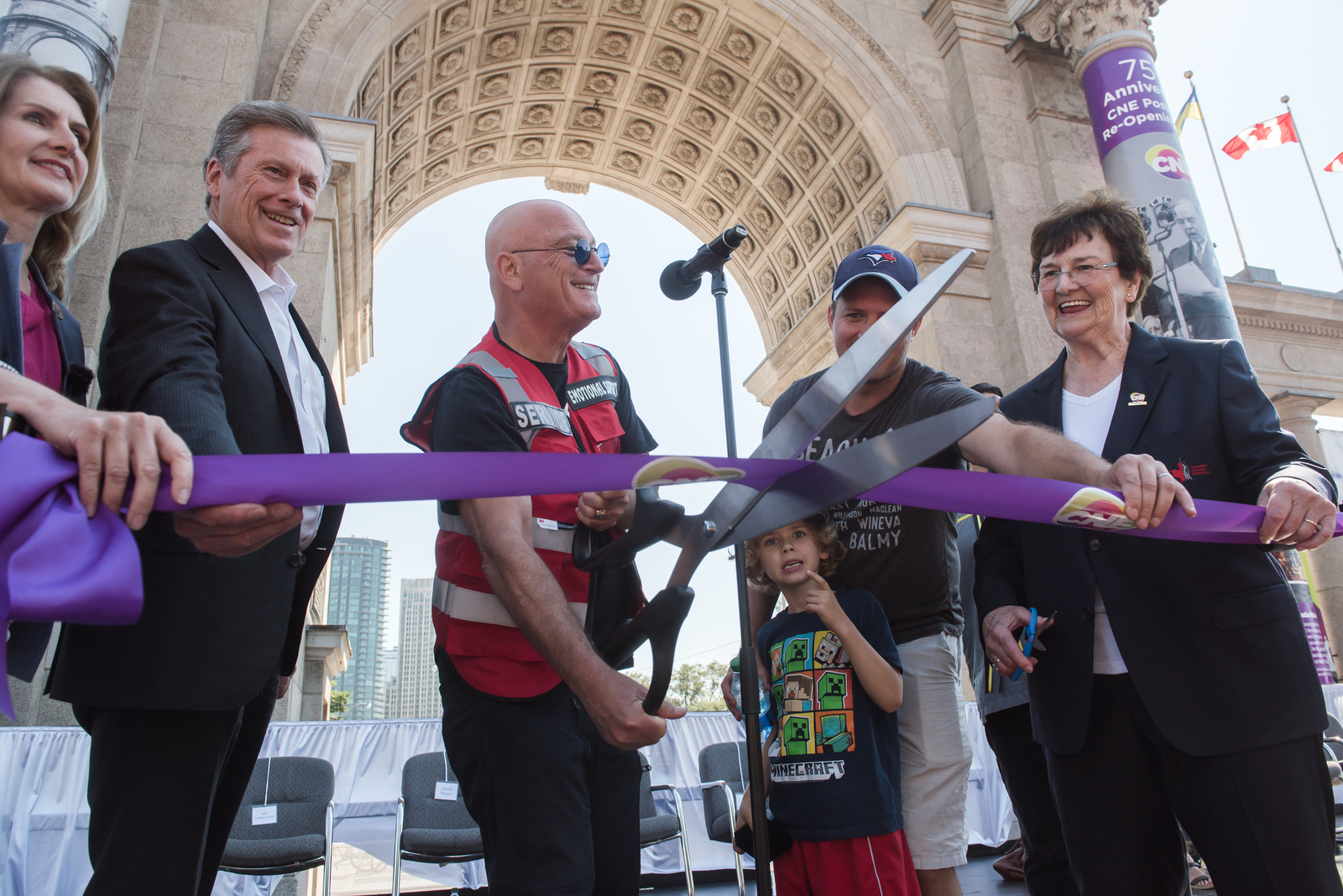 Opening Ceremony for the 2022 Fair

As evidence of the economic and social value of an event that epitomizes Canadian culture like no other, one needs look no further than the 2022 CNE. Local media reported that attendance was estimated at 10 percent over 2019, although official figures were not available at press time.  Not only were they coming, but spending. “Per capita spending was significantly up,” said Darrell Brown, CEO, CNE. “Anecdotally, some vendors were reporting to me that they were anywhere from 30 percent to 100 percent over their 2019 numbers.”

He added, “Generally we had good weather. One Monday was a washout with intense rainfall and flooding. The biggest weather hit was during the Labor Day weekend. That weekend usually comprises 25 percent of our total fair attendance. This year it was under 20 percent and we had to cancel the Air Show on our final Sunday due to a low cloud ceiling. Had we had a sunny three day Labor  Day weekend, I believe that our total fair attendance would have hit 1.7 million. “
Shut down two years in a row, 2022 is a critical year for the Canadian Fair Industry. The coffers are dry, desperately in need of revenue replenishment. The bigger the fair, often the bigger the need – and of course, the potential for bigger ROIs – and the CNE faces an added burden of not yet knowing if a good year is enough to sway Toronto politicians to keep the CNE at Exhibition Place. “We did extremely well this year,” he cautioned. “That said, one fair cannot make or break the CNE. We need a series of successful events. We are still in the process of reconciling accounts and will not be releasing confirmed numbers for some time yet. But I can say that we earned a substantial surplus, enough for us to be planning and implementing a 2023 CNE assuming we are operating under similar terms with the City and Ex-Place.”

Brown is not being facetious. It's a sobering irony that a top-tier fair – first held in 1879 and was the raison d'être for its current home -- must convince urban planners of the fair's value versus other uses for the property, “There are unknowns. We are in the process of negotiating a new agreement with the City of Toronto and the Board of Governors of Exhibition Place. As of now, we do not know what the financial and operational terms will be for next year. Without knowing these fundamental facts, I cannot state definitively that we are ready for 2023.”

Post-lockdown recovery has been slower in Canada than other countries, further exacerbated by inflation. At the CNE, all indicators show consumer confidence is high. “While inflation is undoubtedly a concern, our unemployment rate is at a record low level. Given that Ontario was one of the most locked down jurisdictions and for the longest time, people had saved funds and were ready to come out, enjoy themselves and spend money. The same enthusiasm may not hold for next year. But for this year, advance ticket sales were higher than ever before, paid attendance was higher than in past years and entry after five for evening entertainment was higher than in 2019. Let's hope that the enthusiasm holds for next year.” 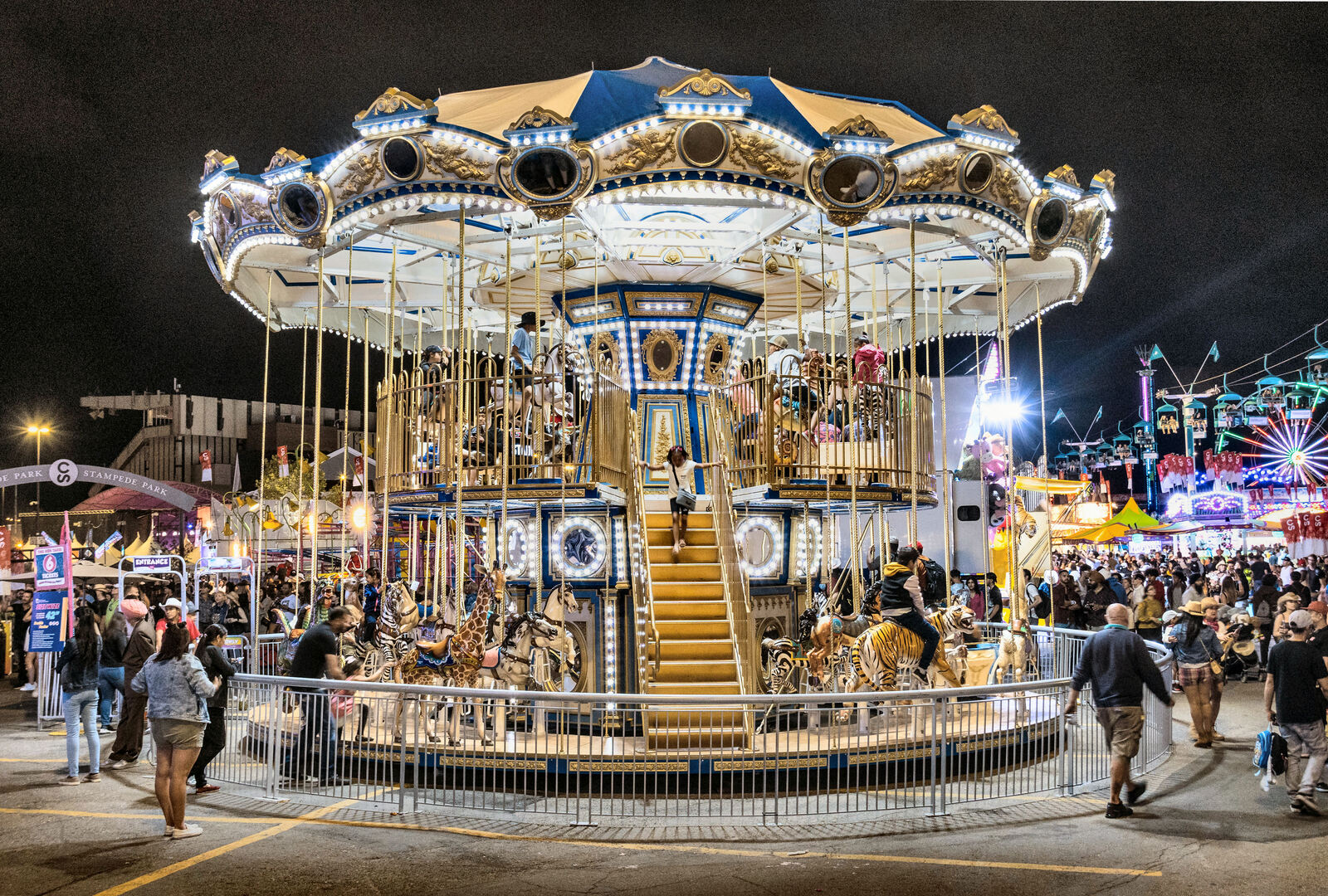 That enthusiasm was most apparent at the North American Midway Entertainment (NAME) midway, which featured 56 rides (down from 62 from 2019) according to Brown, who noted a new addition and instant fairgoer favorite – The Double Decker Merry-Go-Round. “The 2022 Midway revenue was significantly up over 2019,” he said.

“It was great to be back at the CNE after a two year break and you can tell that the crowds felt it too,” said Lynda Franc, NAME. “We had great numbers this year with people enjoying new rides like the Double Decker Merry Go Round and the Raptor Run. Of course, people enjoyed their favorites like the Ferris Wheel and the Polar Express with both rides performing extremely well this year.”

Coming at the end of the Canadian Fair season, the CNE gives the largest carnival company in North America a unique perspective on the recovery of the industry. With our Canadian route ending, we really enjoyed seeing all of our old friends and colleagues as well as many new faces,” said Franc. “Across the country, there was an overarching feeling of gratitude. Our event partners were grateful to be back at it again and presenting exceptional events to the public. The public was grateful to be able to get out and have a ton of fun in the ways that they used to. We're confident that people will continue to stay excited in the years to come. “


The fair's marketing campaign focused on social and online platforms, with a budget bolstered by an infusion of federal support. “The original 2022 advertising was slightly less than in 2019; but we were successful in obtaining an additional $300,000 for advertising from the Government of Canada, which brought the overall media buy up to be in line with 2019,” said ,” said Karen Lynch, Director of Marketing & Communications, CNE.

With two years of no event to promote, the CNE created an innovative outreach program that fostered  a strong social media following, creating a foundation to further cultivate when there was an actual fair to promote. “In 2021, the CNE's social media platforms were used to promote a brand new digital programming platform for the fair called CNE Connected, which launched in August 2020  We were able to promote and offer sneak peeks of the various new pieces of digital programming featured on the platform. From online musical performances and engaging entertainment for kids, to virtual escape rooms and cooking demonstrations, our social platforms helped introduce these new virtual CNE programs to our fans and followers.”

She added, “We've also seen increased impressions on content that uses trending audio on Tik Tok and Instagram, and high engagement through the use of video content like behind-the-scenes looks at some of our programs, or content that offers new perspectives on some of our attractions – like sharing video footage of our Drone Show that was captured from the roof of the Food Building.” 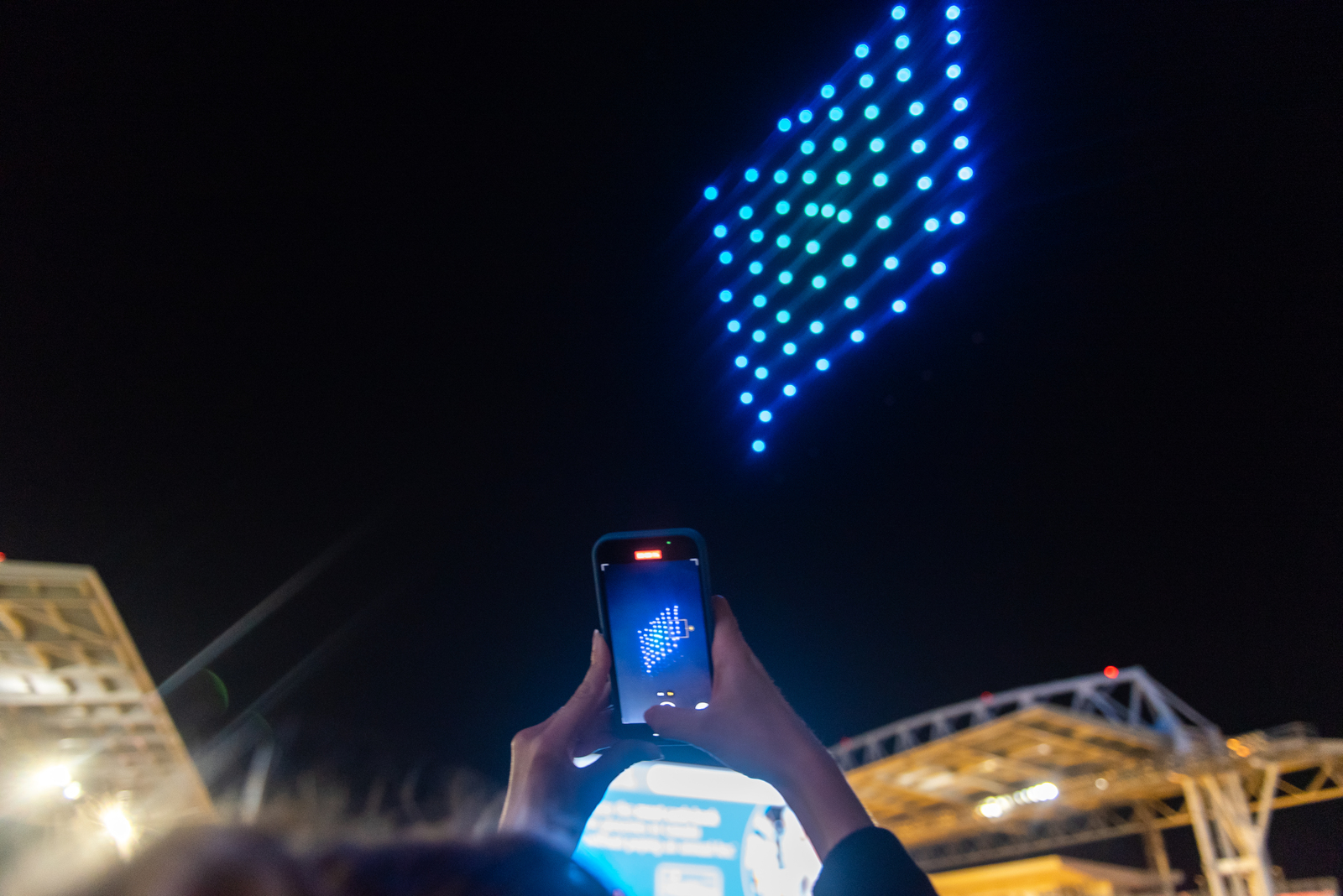 Programming was only one aspect of the 2022 social media campaign. Even more successful was catering to the fact people like to win stuff. “An effective social media promotion tactic on our channels is contesting,” she said. “We typically have high engagement on posts where we offer ticket giveaways or experiences like our Midway VIP contest that gives our followers a chance to win the ultimate day on the midway with express ride passes, free games, food vouchers and more.”

Old media was still integral to the overall marketing, although the 2022 budget showed that print, radio and television continue to be de-prioritized. The 2022 media buy was: Print – 14%; Radio — 18 percent; Out- of-Home – 22 percent; Digital – 40 percent; and Television – 6 percent. “The media buy did shift to address changing media consumption habits resulting from the pandemic,” said Lynch. “Radio listenership has changed since previously people listened to radio while commuting in their cars to work, and with more and more people working remotely, radio listenership during the commute declined as did “in office” radio listenership.  Moreover, more and more readers moved away from print editions of newspapers and sought to get their news online.   Accordingly, in 2022 our print spend was approximately $200,000 less than it was in 2019, and our radio spend was $128,000 less in 2022, than in 2019.

Like most Canadian fairs, the CNE's marketing need was to emphasize a recovery message. The campaign – which bypassed the current conflict between the city and the fair – found a tagline that evoked the joy of returning: The CNE is BACK at LAST!   Let's Go to the Ex!

“We could not have asked for a more enthusiastic response from attendees and from the media,” said Brown. “The event far exceeded our expectations. Going into it, we wondered whether there would be reluctance to return to what is inevitably a very crowded event. The advance ticket sales signaled to us that people were excited. But, advance ticket sales comprise a small percentage of our overall ticket sales. We hoped that the enthusiasm would continue when the event opened. And it did. On a not very nice, cloudy and rainy Saturday, we still had over 100,000 attendees. People just wanted to be here and to enjoy the Fair and each other. It absolutely exceeded our expectations and shows to the naysayers that this event continues to be important to people.”

Internationally, nationally and locally -- a no more visible sign that the worst of COVID is behind Canada is when the CNE colors of pink, purple and lime green light up the CN Tower, -- the famous communications & observation tower in downtown Toronto that defines its skyline – announcing the return of a beloved event. For many, the notion of holding the CNE anywhere but the Exhibition Place borders on the unfathomable. “Exhibition Place is a really great location,” said Franc. “It's very accessible with the public transportation and it's right near the water and in the heart of Toronto. Many people are even able to walk to the CNE! It also has a very rich history of hosting for over 100 years, it's truly a staple to the City of Toronto and its evolution over time.”