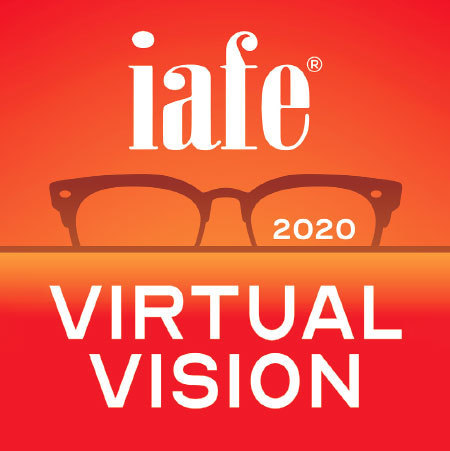 A year like no other meant that the largest end-of-year industry confab was like no other. Virtual Vision – the pandemic online replacement for the 2020 IAFE Convention & Trade Show, which was cancelled due to the coronavirus crisis.

With shelter-in-place orders and most communities nationwide on lockdown, nearly all sectors of the economy and much of our personal lives have moved online. When the cancellation of the annual convention and tradeshow became a reality the organization realized that replicating the live experience the convention online would be a fool’s errand. Instead, the IAFE created an entirely new experience designed to optimize the advantages of technology while addressing the pressing needs of an industry in dire straits after an estimated 95 percent of all fairs were cancelled this year.

What did the IAFE membership need the most for its end-of-year convocation? “An epic two-day educational extravaganza," said Jill Albanese, Food & Beverage Manager, Wisconsin State Fair, who is credited with leading the IAFE Program Committee and staff in developing  and implementing two days of live, interactive and highly informative sessions focused on how best to restore the industry in what is hoped to be the final phase of the COVID era.

Technically – pun intended – the convention was not a typical Zoom Meeting. The association used the CrowdCompass online platform, featuring 28 educational sessions, one keynote speaker session, two morning kick-off sessions, two lunch showcasing sessions, two evening happy hour showcasing events, and nearly three dozen pre-recorded, on-demand short sessions called Power Talks and Champions Circle. A total of 58 exhibitors were featured in a Marketplace, the virtual tradeshow, which will be fully accessible on the IAFE website through the end of the year.

“Our metrics for success of Virtual Vision are based in two stages of the experience –“Live” and “Access to the recorded sessions,” said Marla Calico, President and CEO, IAFE. “For the live days, in addition to the number of registered users, the number of live attendees was great – over 2,000!  We are also looking at the Net Promoter Scores (NPS). This is the only similarity as to metrics to compare to the in-person Convention & Trade Show. We started using the NPS system a few years ago and we find it is a very realistic metric to measure how well we met the needs of our members.  We won't know the final metrics for the overall event until we evaluate that in early January after the online platform has closed.”
Preliminary metrics included the number of registered users (450), the number of live session attendees (2,017 over two days and 32 different events), and finally, the NPS score. According to the IAFE press release, “as of Dec. 5, 2020, the NPS score was 70.2, considered very excellent.”
But metrics only tell part of the story. The scope and depth of the presentations, nearly free of computer glitches, seemed to be the needed panacea for an industry in need of resolve and forward looking, practical guidelines.

“Virtual Vision was tremendous,” said Ray Allison, Indiana State Fair. “The sessions I attended were great and the technology worked very well (as well as technology can anyway). The content of the sessions ranks up there with the best from any IAFE Convention I’ve attended.”
“Crazy impressed on how smooth this virtual thing went,” said Rachel Lisk of the Lewis County Agricultural Society of Lowville, N.Y.  So organized and professional,” Nancy Smith, General Manager, South Carolina State Fair and 2020 IAFE chair, called the Virtual Vision, “an historic and epic event. Someone in my office had a strange look on their face and said, 'I’m just wondering how in the world and what had to happen for the IAFE to be able to have something so great to give us?' I think that pretty much sums it up."

Pascale deGruy, Fair Manager, Gulf States Fair, had been awarded a scholarship to travel to San Antonio and attend the IRL convention (the funds will be available to her in 2021). Initially disappointed – she was looking forward to her first national fair association convention after shifting career gears from managing music and art events to managing fairs – but the networking, exchange of ideas, and learning and discussing the many facets of the current crisis proved invaluable.

“I’m so glad they pulled off the Virtual Vision,” said deGruy. “I was so impressed with what the fairs that couldn’t open were doing. It was inspirational, learning all the different stuff fairs can do to get revenue. It showed us how hard these fairs work with their communities. That’s what I got the most out of.”

Of particular interest for deGruy was the seminar: Case Study: Fairs That Went Ahead, an in-depth discussion among a few of the handful of fairs that did go on in 2020. Moderated by Clay Campbell, Triangle Talent, panelists included: Matt Immel, of Fond du Lac County Fair in Wisconsin, Courtny Conkle, Wyoming State Fair & Rodeo, and Jennifer Wallace, Panhandle-South Plains Fair in Texas.

The Gulf States Fair was also able to surmount the odds and hold a fair. “We were all going through the same struggles creating our executive plan. We were able to offer our experience to others and got feedback about what we did. We’re in Alabama and it was interesting to hear what the other city and state regulations were and the decisions each fair made. It was interesting to hear the different perspectives.”

The most crucial takeaway?  “Having a plan for times like these,” she said. “Now that we have all these experiences to draw from, it’s a great time to come up with the new plan, because fairs are united  in having safety precautions and all the protocols to for a safe fair. We are going to need those plans for 2021 and probably for years to come.”

The immediate feedback and response to the sessions, to the platform used, to the level of live engagement, and interaction with attendees from across the globe has been overwhelmingly positive. The IAFE press release stated: Many comments indicated that the ability to reconnect with friends from throughout the industry in real-time face-to-face interactions or via chat was much needed and helped all to feel engaged.”

Although the online format may have only increased attendee hankering to meet in person next year, the opportunity to engage with like-minded professionals in whatever format can reinvigorate the industry, was welcome progress as they work through the continuing challenges.

“ Every person – just like every human I know on the planet – has been drug down and overwhelmed by the coronavirus pandemic,” said Calico. “CEOs have had to permanently lay off employees; the personal finances of so many are in peril; some fairs and associate businesses do not know if they can survive into 2021. After 9 months of this and now hearing the news of the surge in the virus throughout the world in recent weeks, almost every person I know was in a low place. Throughout Virtual Vision we heard over and over again from members how wonderful it was to "see" fair people and even though we wanted to be together live, the laughs could still come through on Zoom.”

She added, “in networking sessions folks connected again and felt at ease and felt it was ok to be "normal".  They were able to realize again, "you are not alone in this." As an Association, our most important work right now is to keep members connected. Our brand, "The Network" has always been that we bring people together because it is when we are united that we excel.”