Vinyl Shortages, Backorders and Price Increase: Keeping Midways Covered During COVID Is More Challenging Than Ever 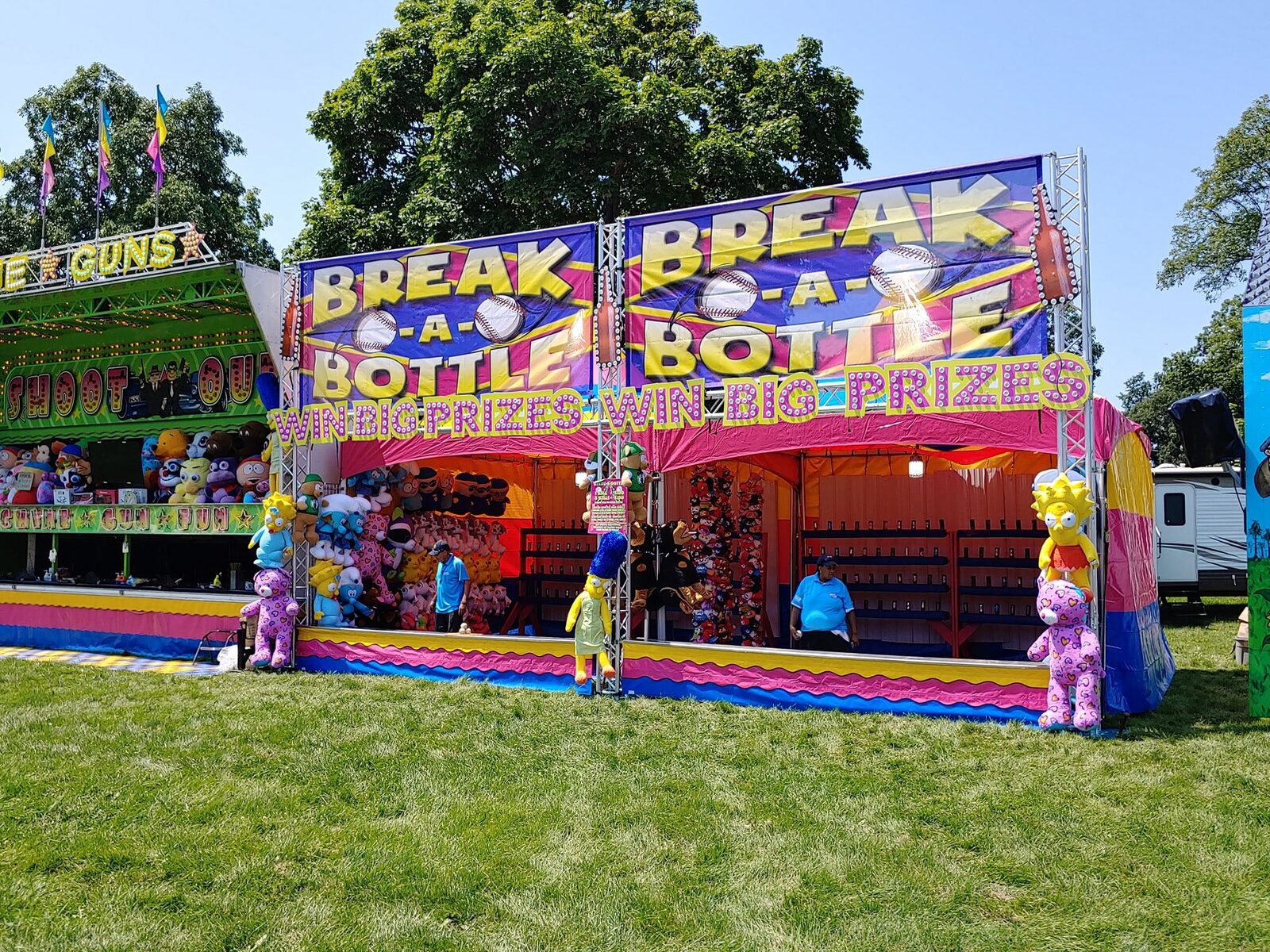 The pandemic has challenged all segments of the fair industry, but maybe midway vendors have it the roughest. Food and game vendors are coping with COVID-related price increases and supply issues. Price increases and shortages have been reported on certain food items, many categories of plush, and a range of resin products, such as plastic utensils and cups.

Content is not the only supply problem vendors must navigate in the pandemic era. Exteriors are also suffering – polyvinyl chloride (PVC) – the essential material for wraps, canopies, skirts, tents, banners, signage – nearly the entire visual range of a midway – has been in short supply throughout the lockdown.

The main reason for the supply disruption is the same for issues affecting plastic forks and knives, resin. The vinyl in PVC is resin-based, and a range of factors have negatively impacted supply. International supplies – much of the PVC is sourced through China and other Asian nations — completely shut down production in 2020, the reopening of the industry then proceeded at a pace inadequate to keep up with the increased demand.

The situation has been worsened by the global shipping slowdown, which further delayed supplies. Some PVC suppliers did shift towards more domestic production, but even that strategy was impacted by the energy crisis in Texas earlier this year, where massive winter storms produced power outages that severely impeded energy production, the ramifications of which industry observers say are still being felt. The labor shortages due to COVID have made matters worse at every stage of PVC production, through shipping and product processing.

“From talking to my vendors, the root causes of the worldwide resin shortages are many, from the electric outrages in Texas to the problems with shipping,” said Chuck Wheeler, owner of Amusement Wraps. “It's hard to get a straight answer on exactly why, but there is a shortage. We initially switched suppliers when bigger companies cut back on what they were allocating to us, but now those smaller suppliers are also reporting shortages.” 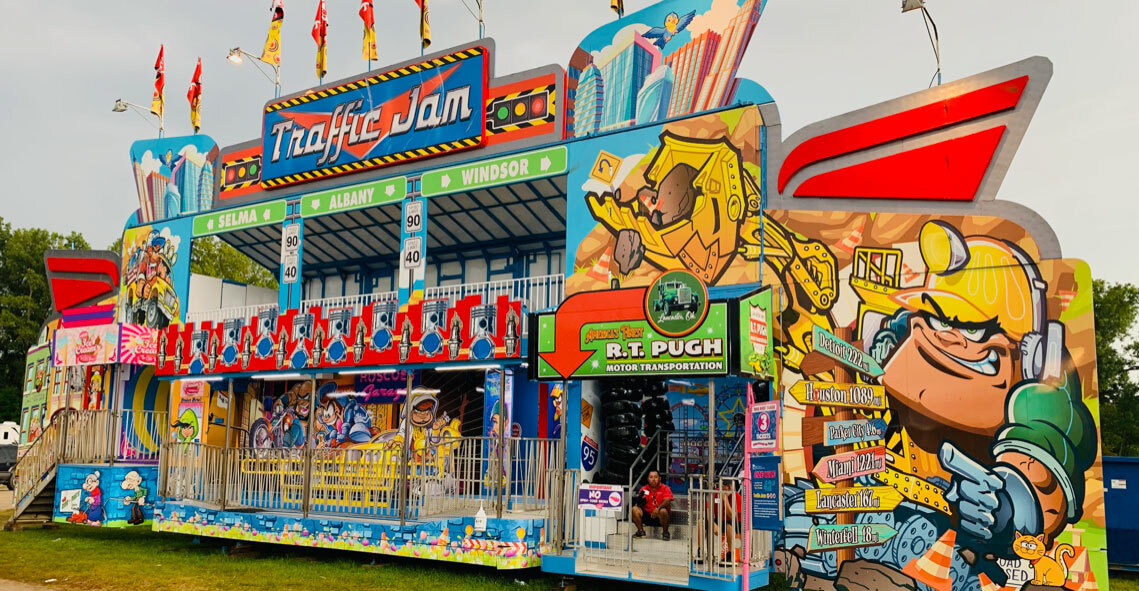 “There are containers of PVC that are circling the waters because of the problems with the port system,” said Pete Downs of Waterloo Tent & Shade Creations. “Most recently, we're seeing shortages in white and yellow. We are seeing some price increases.”

Like the rest of the fair industry, the wrap and “canvas” business – while the actual canvas fabric is rarely still used, the term has become synonymous with the vinyl based products that replaced it – shutdown in 2020. Orders slowed down and wrap, canopy and other midway suppliers likewise cutback operations.

Typical of other midway vinyl manufactures, Downs estimates his orders were down more than 70 percent after the lockdown went into effect and fairs were cancelled. “We didn't even go to Gibtown.” The bulk of 2020 orders were coming from other customers, such as Amusement Parks and other outdoor facilities.

As 2021 unfolded, a confluence of vinyl supply issues emerged. Orders began to pick up, especially as Florida fairs began to reopen and other fairs later in the season announced their intention to operate. Consequently,  orders for vinyl steadily picked up. Nearly simultaneously, resin shortages and price increases were being experienced, and the fair industry's wrap, tent, canopy and covering manufacturers were in precarious position – how to manage inventory when the vinyl supply was disrupted and orders for new products picking up again.

Kenny Smith of Rocken Graphics said early in the first quarter of 2021, his suppliers warned him of impending shortages. “We loaded up on inventory because the shortages were forecasted. By March (of this year) we were busy again. Carnival companies were busy wrapping up again.”

Although Smith was confident of his supply going into 2021, replenishing stockpiles has been inconsistent. Prices have increased approximately 20-25 percent – the Wall Street Journal reports that PVC prices have “more than doubled” since 2020. Companies are now frantically searching for the best prices in what has become a volatile market, compounding the already stifled shipping industry.

For end users, delays have now become the norm. “Prior to COVID, someone could call and place an order in 4-6 weeks, now it's at least 90 days,” said Smith.
There's still no light at the end of the tunnel. “The problem will last another 18 to 24 months,” said Smith.

For tent, canopy and other coverings, aluminum and steel – the structural materials required to hold the canvases in place – are seeing similar shortages and price increases.  According to Bloomberg News, aluminum “jumped 26 percent this year to about $2,500 a ton,”  and is forecasted to “record prices above $3,000 by late next year.”

Straining the system are labor shortages all along the supply chain, with one of the most impacted being manufacturers. With their businesses close to being completely shuttered in 2020, manufacturers laid off the majority of their staff. Rehiring them in what has been the tightest labor market in nearly three decades has been slow at best, and companies are working with skeletal staff, further impeding production.

Downs said when his company shutdown, he was forced to lay off 100 percent of his employees. Even though unemployment and other stimulus support has mostly ended in his state, new employers including a John Deere factory and a Target distribution center were now offering highly competitive salaries. “They basically pirated a lot of our employees,” he said. “We're still dealing with a labor shortage, but so are the carnival companies. It's an industry wide problem.” 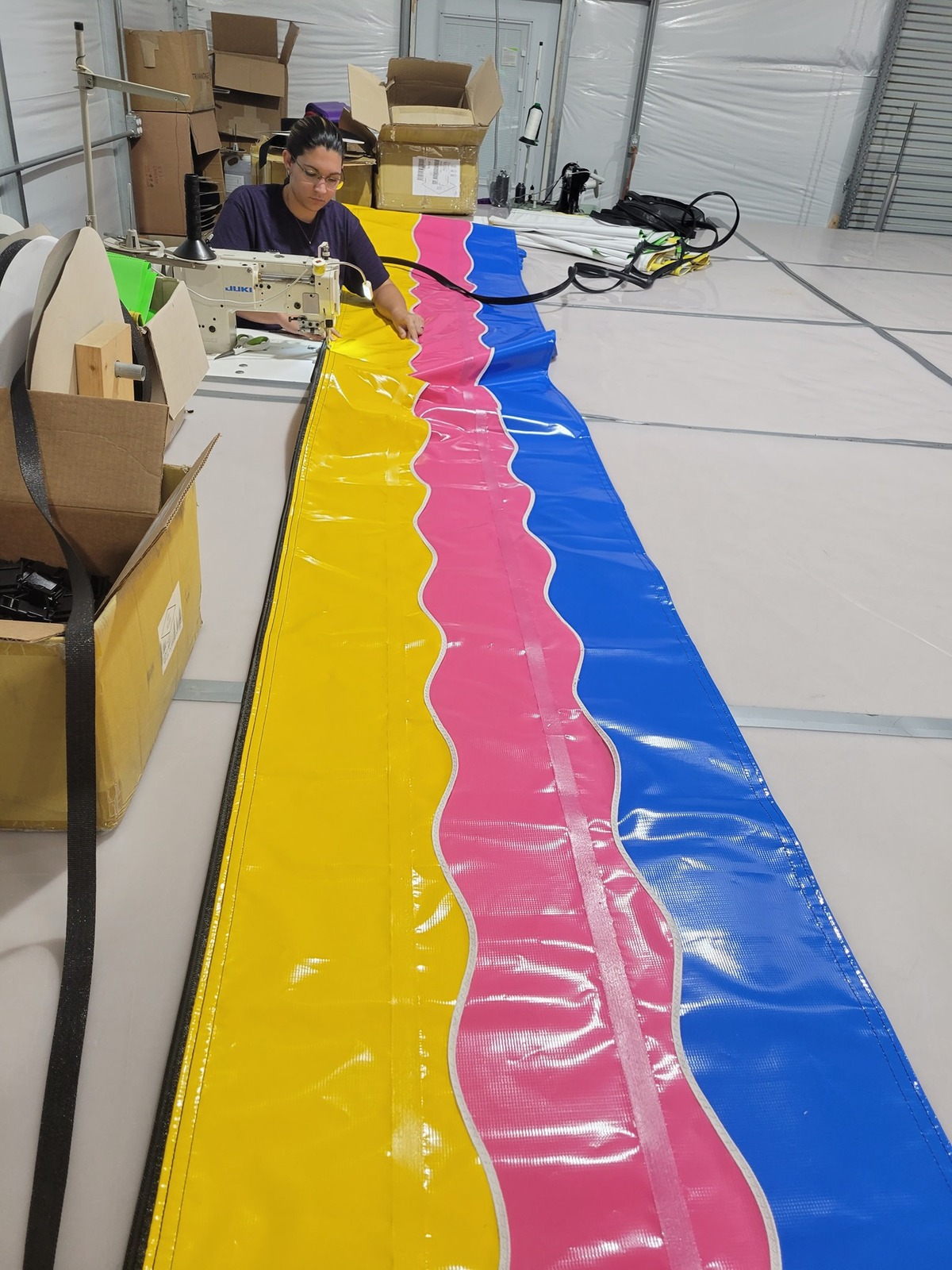 What's frustrating is that the vinyl companies were experiencing a real surge in both new products including material and graphic innovations as midway providers continued to evolve their customer presentation. “We've been working with vinyl manufacturers to create a new product with that is antibacterial, and with improved wicking to prevent seeping, mold and mildew,” said Downs.  “Carnival companies, fairs, and water parks are also coming to us with exciting new designs, and we're starting to produce new colors because of these designs.”

Incorporating digital printing techniques, including increased use of photography and graphic designs, are becoming more in demand as midway providers pay more attention to enhancing their visual presentation. “The biggest change has been using LED lighting in the designs,” said Smith. “The truss tents are fairly new for us, and we're selling more and more. They're big and impressive and a good investment. Companies are replacing their old stuff. They impress us with what they're expecting. They're really getting ahead of the curve.”

Midways are now competing – at least visually – with what has become standard at other venues. “They feel more like theme parks,” said Wheeler, whose daughter, Tracey, the company's lead designer, holds a BA in visual arts. “You are seeing more depth of color and characters on the signage and banners as well as the rides and funhouses. We are seeing more business from the game stands this year. If you are going to survive on the midway, the old status quo just doesn't cut it anymore. Companies are coming to us with new designs, new fonts. There are no limits to what we can now do.” 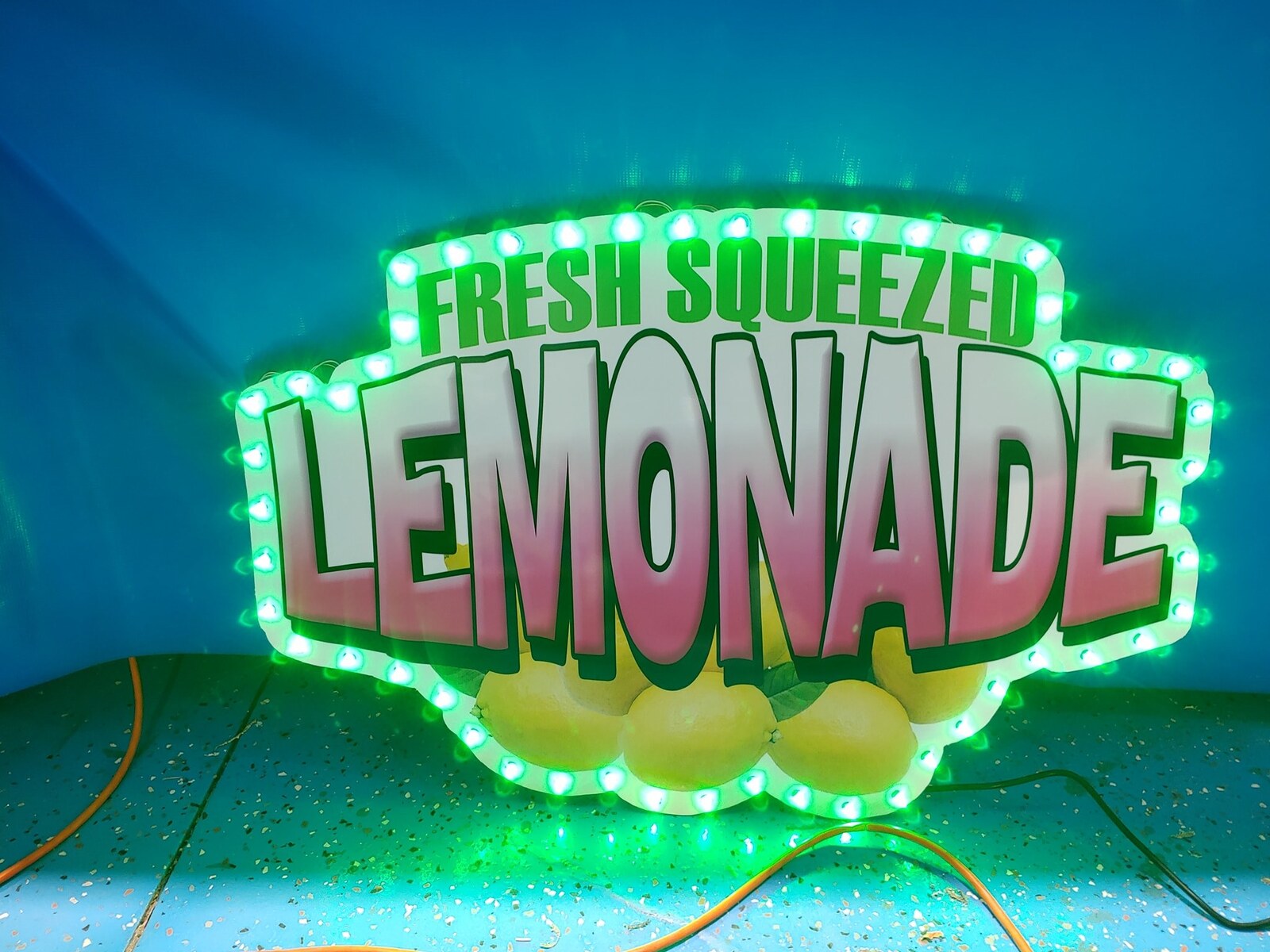 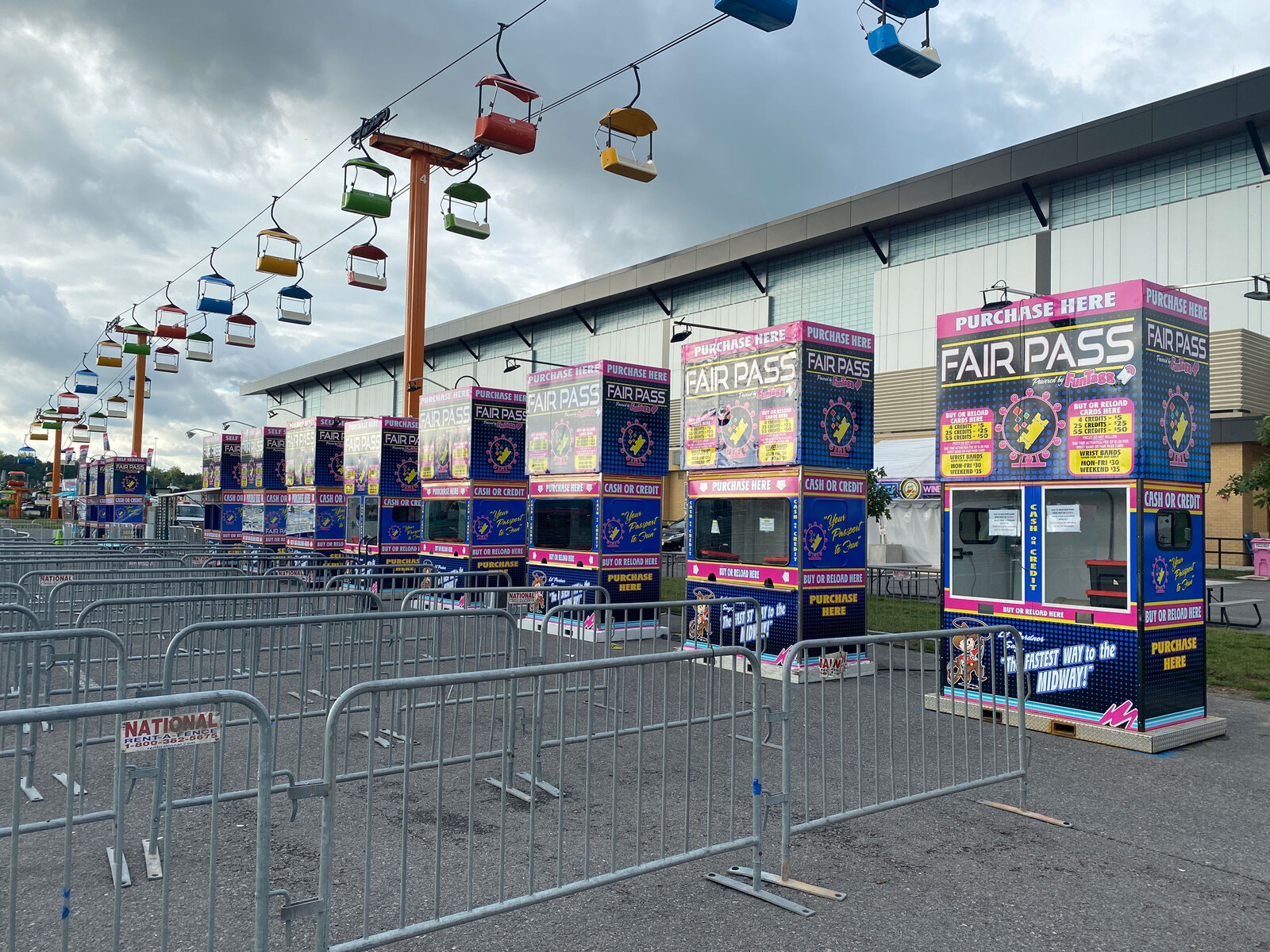