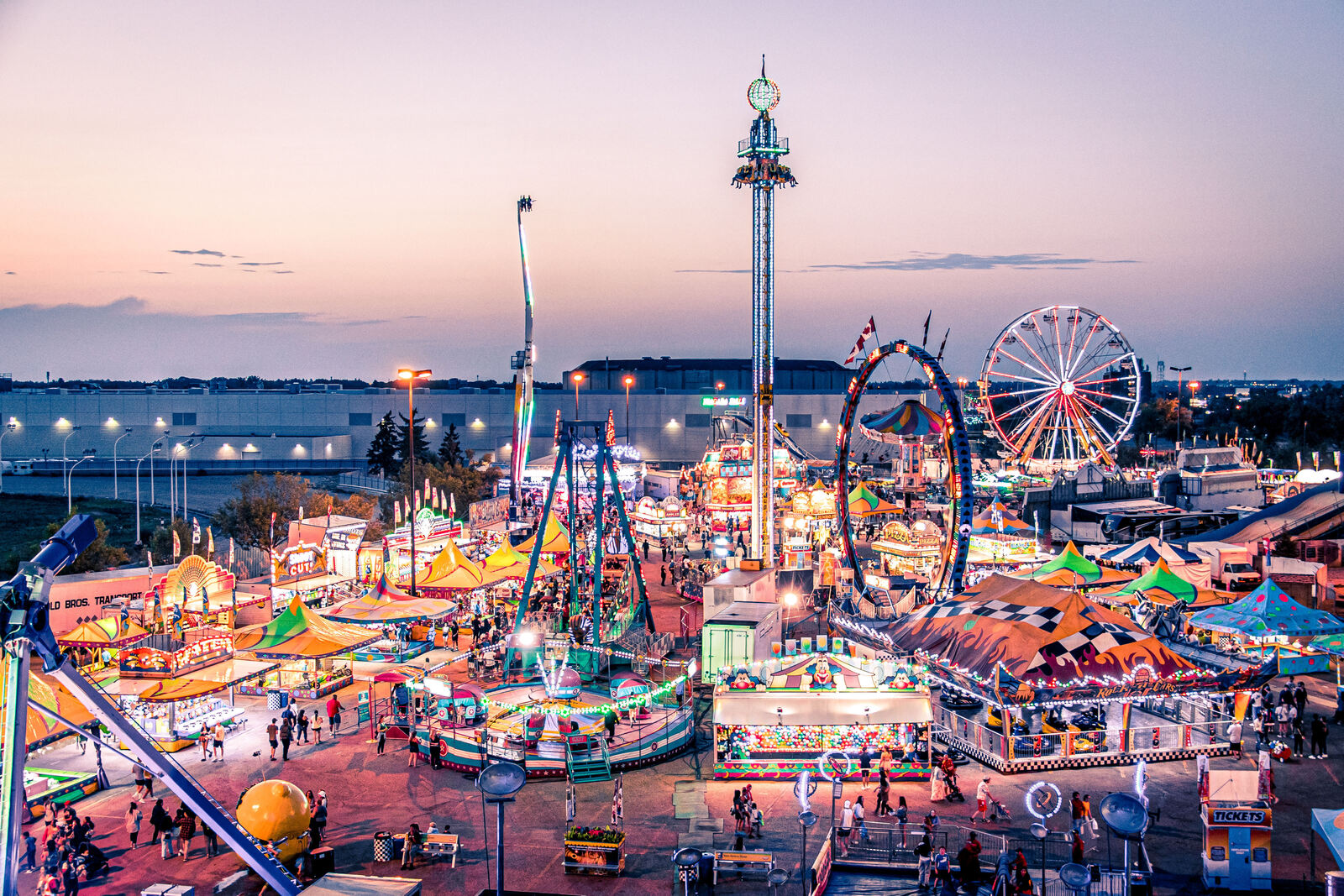 NAME at the Calgary Stampede (Canada)
Photo by Scooter Korek

It was not the best of times, nor the worst of times, but the one thing that can be agreed upon was that the 2021 fair season was a time like no other.

For carnival companies, the best of times are specific years that correspond with clear skies and comfortable temperatures, and usually also depends on the carnival company and its route.

But the worst of times was the same year for everyone: 2020. The first year of the global pandemic shutdown the economy and in excess of 90 percent of fairs were cancelled, including nearly every fair used as the basis for the annual Top Carnivals Playing the Top 50 fairs, as compiled by Carnival Warehouse.

Thus, 2021 was the comeback year.  An estimated 90 percent of North American Fairs were held in 2021, a return to normalcy in most places. The hope is that 2022 will show improvements in the areas of spikes in COVID variants, labor shortages, rising  transportation and fuel costs, and persistent supply disruptions which have negatively impacted fair attendance and carnival company operations.'

In 2021, the same three carnival occupied the top three slots as they did pre-Pandemic, based on attendance at the Top 50 Fairs.  North American Midway Entertainment (NAME), Wade Shows and Ray Cammack Shows (RCS) -- the only difference being the order – Wade Shows swapped places with RCS, who lost the #2 position mainly due to the cancellation of two of its biggest events – Houston Livestock Show and Rodeo and the LA County Fair.

NAME, the largest US-based carnival company, retained its #1 position, in spite of the cancellation of some of its biggest fairs, including the CNE and K-Days and much of its Canadian route. A deeper look at the 2021 route reveals an even more distressing 2021 fact – this power trio shows they serviced 9,980,564 fewer fairgoers in 2021 than in 2019. Declining attendance – in some cases more than 50 percent drops – was the rule not the exception this year, although many fairs reported increased per-caps and robust revenue.

Did higher midway spending offset attendance dips – as well as increased costs of labor, fuel and supplies? That is one of many questions carnival companies are now answering as they set their sights to 2022. "We were very excited to hear that we made the top of the top 50 list this year,” said Lynda Franc, NAME Corporate Marketing Director. “It's an accomplishment that truly speaks to the hard work of all of our staff who has stuck it out with us through thick and thin. We know that the pandemic was a challenge for everyone, and we were no exception. Moving forward, we anticipate that we'll still see some challenges as we continue to manage coming out of this pandemic, but we are confident that the show will continue to go on.”

“We always strive to be #1,” said Frank Zaitshik of Wade Shows, joking about his 2021 upward shift in carnival company rankings. However, noting that being in the top tier of carnival companies as ranked by attendance at the top 50 fairs, “it's just one form of measurement and there are a number of different ways for those who determine who is on top. We have always maintained that while  there is correlation between attendance and ride revenue, attendance alone shouldn't be the metric for ranking fairs and carnivals. There are so many other factors that go into that calculation, besides attendance, this year bore that out. Per cap spending was off the charts.”

What the numbers suggest is that while Covid-19 depleted turnout, especially among senior citizens and older adults, who are more at risk, it also shifted attendance towards families and young adults, i.e. the key midway demographic. “Like politicians, carnival companies have their base,” said Zaitshik. “This year demonstrated that with few exceptions, entertainment is not the only driver of attendance to a fair, and that's documented by the increases in revenue on the carnival midway. It is up to us to maintain that enthusiasm.” 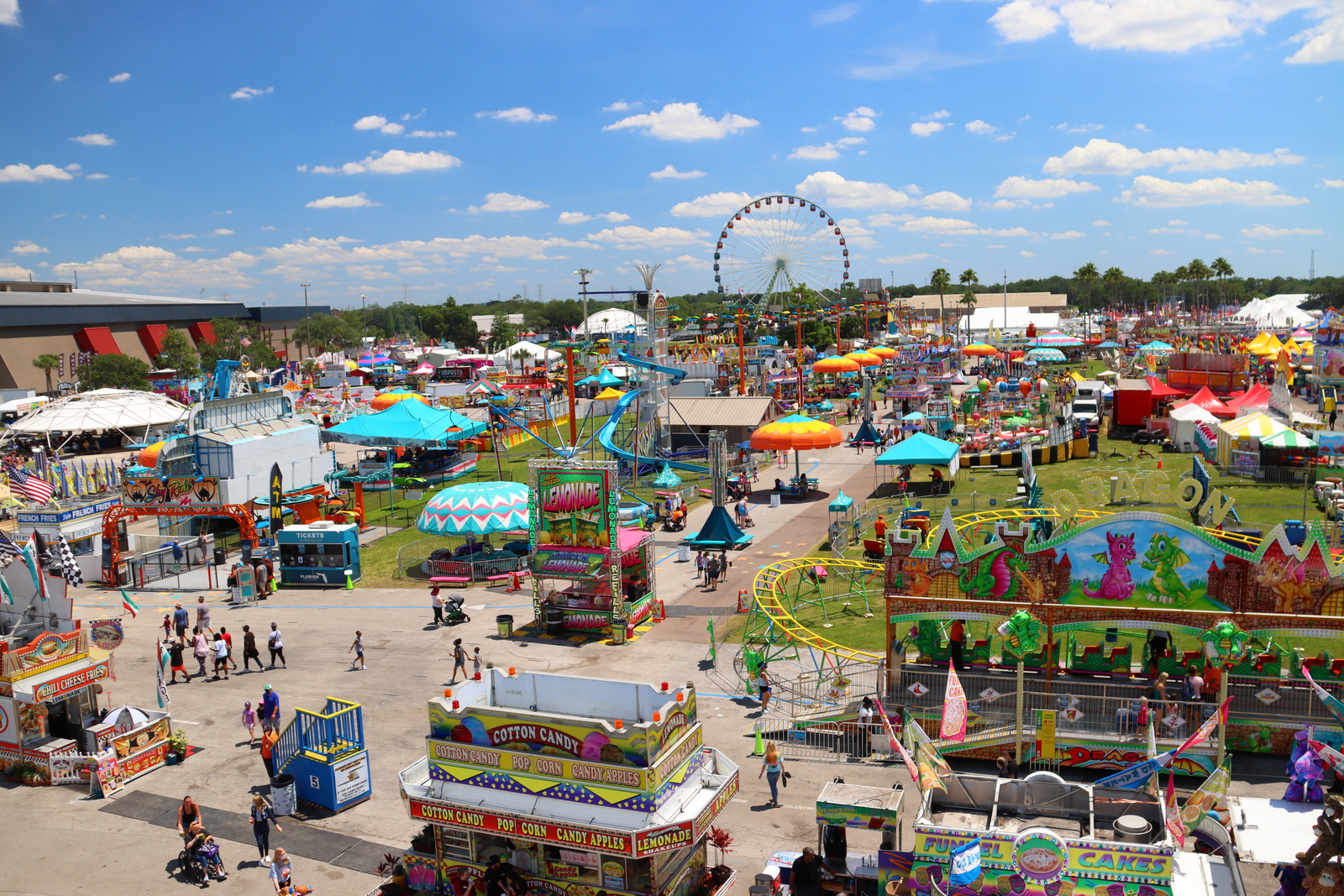 Of all the top tier carnival companies, by losing two of the largest outdoor events of the pre-pandemic era, RCS took the biggest hit in terms of ridership. “Losing those two fairs was enough to move us down, the impact was obvious,” said Chris Lopez, Vice President, RCS Inc. “We were hoping to bounce back completely in 2021, but for an entire year we had issues with getting enough employees.”

Lack of workers was the widespread lament echoed by carnival companies in 2021, and RCS struggled to find ways to do more with less. “We had higher capacity rides in the same footprint and more customer care areas,” said Lopez. “We learned a lot from COVID and are better prepared for 2022.”

By far the most significant midway modification – possibly foreshadowing the most transformative change for many 2022 fairs – was ride shrinkage. RCS, like many carnival companies, reduced the number of rides – in most cases it was more likely about 10 or less; rather than 10 and more.  Still, it was the year's most pervasive trend – 2021 midways with the same amount or more equipment than 2019 were the exception, not the rule. This realistic response to fewer workers as well as new social distancing guidelines mandated by health officials and fair boards also affected ride selection.

More with less also makes financial sense, and carnival companies seem confident that this year's bottom line has convinced fair organizers and stakeholders not to insist on midway expansion any time soon. “Working with less rides was a challenge we had in 2021,” said Lopez. “What we found was that with the right rides we are riding just as many people with less equipment. The OC-Fair and the Arizona State Fair had limited entertainment and zero promotions, but they broke attendance records. We are working with our fair partners (to understand) that more rides isn't always the way. We both can make more without giving it away and overpopulating the footprint.”

Ride reduction may be the most visible midway COVID change, but it was accompanied by many other drastic changes, ranging from socially distanced queue lines to entirely cashless midways. Pent-up demand is the most common phrase used to explain spending surges experienced at many fairs, but fairgoers graciously adapted to all the new restrictions – as well as additional cleaning crews, customer care areas and the new rides, many of whose debuts had been delayed a year. 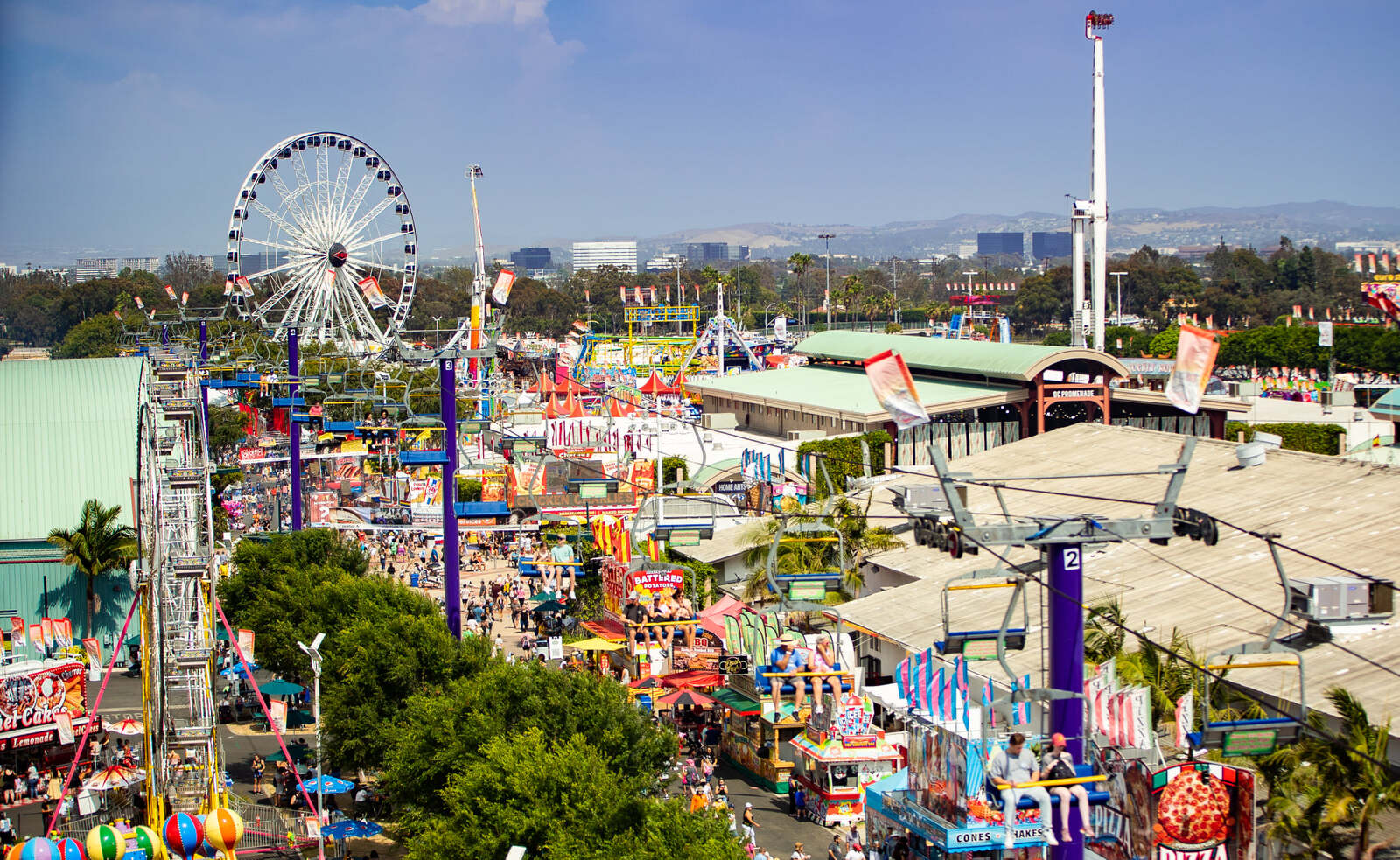 RCS Midway at the OC Fair, photo by Chris Vega

Festivals and other large outdoor events seemed scarce this summer – many cancelled two years in a row – but fairgrounds and midway providers strategized a path forward that was in keeping with the current pandemic protocols of health and safety while preserving the essence of what has been enticing communities for more than two centuries.

“Attendance was the same or up (from 2019) in a lot of places, but spending was up everywhere,” said Rick Reithoffer of Reithoffer Shows. “After the 2020 lockdown, a lot of people just wanted to have some normalcy, and they wanted to go somewhere and they wanted to see the fair. They needed to do things in person. The outdoor amusement businesses allowed that to happen. It was a safe avenue for people to have some fun.”

Reithoffer's 2021 experience exemplifies the unpredictability of a season filled with pendulum swings that would put any Tilt-a-Whirl to shame. The company went from #6 in 2019 to #4 in 2021, but this trajectory did not follow a straight line.  The Georgia National Fair saw a 12.7 attendance increase pushing it to #31, while the New Mexico Fair – after Governor Lujan Grisham, citing delta variant spikes in the state, mandated all attendees must show proof of vaccine – saw such a steep attendance declines that it went from #38 in 2019 to #46 in 2021.

“The biggest surprise was in New Mexico, attendance was down 45 percent down,” said Reithoffer.  “It was supposed to be business as usual and we made our trek out there, then they lowered the boom and it really killed the fair. But the other surprise was in Perry (Georgia National Fair), where attending and spending were way up.” 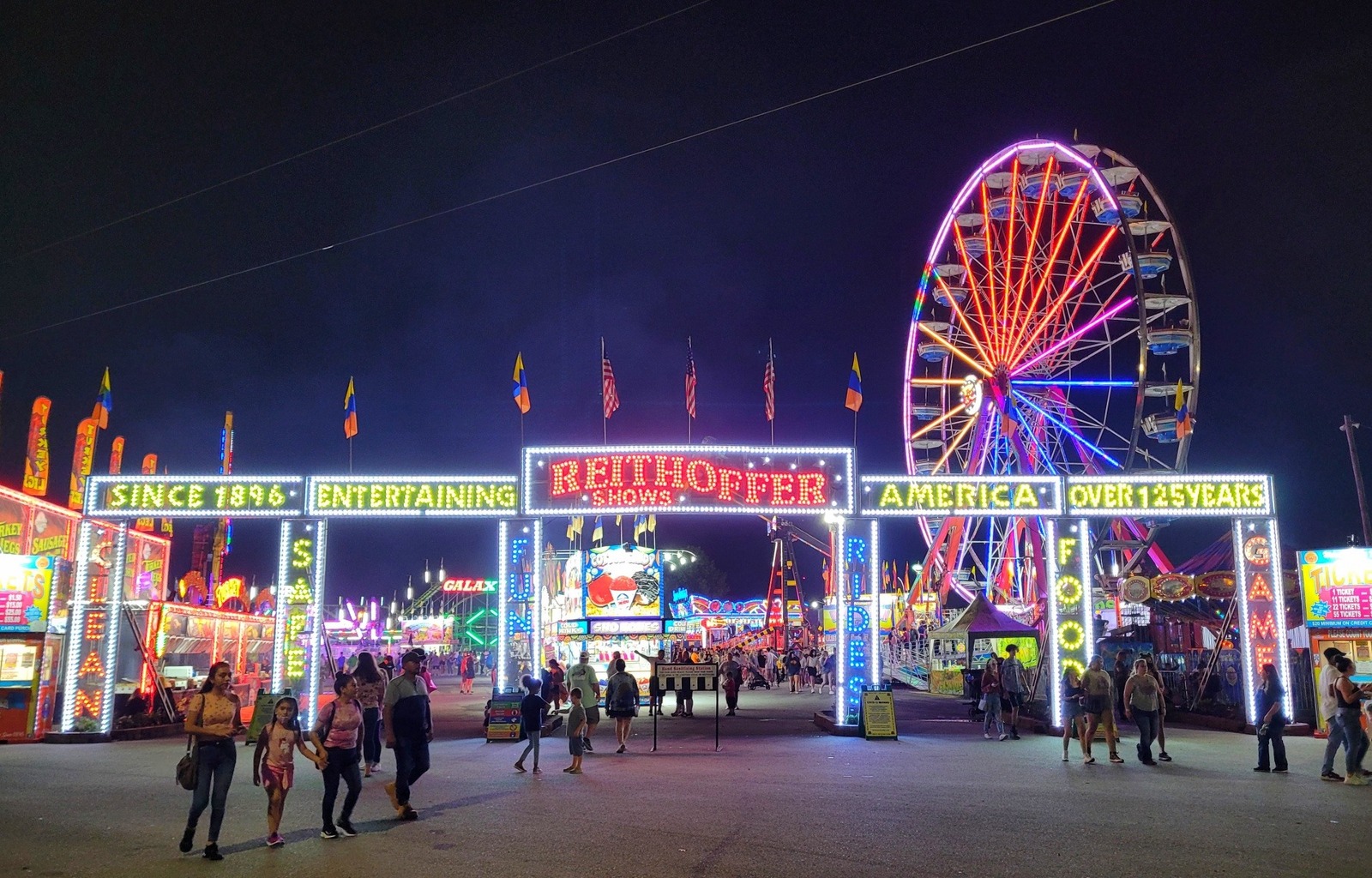 Every cloud has a silver lining of course, and companies are still calculating the impact of constantly rising prices in fuel, transportation and supplies. Everything from wristbands to equipment parts not only cost more, but took longer to get, which only added more nerve-wracking pressure on carnival companies. “It took longer to set up, it took longer to tear down,” said Reithoffer. “Everybody on the show was overworked. We were always under pressure to make openings just because of labor. The biggest issue facing the industry in 2022 is labor. We are already getting tapped out from the H-2B because other industries are applying for visas. Worker shortages are affecting every business. We're not alone.”

Crabtree Amusements showed the most upward mobility on the list. It was #11 in 2019 and ascended to # 6 in 2021. It's Top-50 fairs include Colorado State Fair, the State Fair of Louisiana, Sioux Empire Fair, and the North Dakota State Fair. Attendance may have fluctuated by percentage points due to persistent delta spikes, “but people were spending,” said Pat Crabtree. “We opened in February and stayed strong the entire route. We did not see a decline. Game revenue increased. People were definitely spending more money on games. Games are usually last on the list, but game spending was up considerably and I hope that continues next year.”

NAME at the Calgary Stampede (Canada)