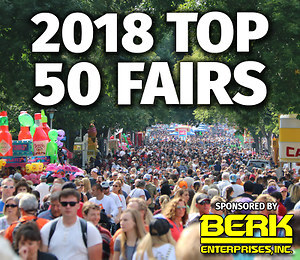 If there’s any doubt to the continuing popularity, consider that 43,527,187 individuals attended the Top-50 fairs in North America in 2018. This figure doesn’t take into account the hundreds of other fairs, particularly the local, county and regional fairs, consistently attracting tens of thousands or even hundreds of thousands annually. NFL games as a comparison – may be seen on screens by millions worldwide – but annual spectators sitting in stadiums watching live games is less than 18 million (17,510,312 in 2015 according to ESPN).

Compiled annually by Carnivalwarehouse.com, the 2018 Top Fair list reveals a robust outdoor event industry successfully connected to communities, tapping into a unique niche of popular culture through agriculture, entertainment, outdoor amusement rides and traditional family entertainment. Significantly, nearly all the fairs making the top 50 in 2018 have a closely interdependent multifaceted relationship with the agricultural industry, indicating that the farm business is upbeat and robust, rejuvenated by the local-vore movement, farm-to-table initiatives and the growth of regional artisanal producers, especially local wine vintner’s and craft-beer breweries.

This focus for Houston meant a widespread and continual upgrade of space and operations, a pattern that distinguished many of the high-performing fairs this year, including the New York State Fair and the Minnesota State Fair. “Our biggest challenge was space,” Cowley pointed out. “When it’s crowded, the fair experience can be diminished because of the lack of programmable space.”

So in the last few years, the fair has created more leisure space, adding benches and rest areas throughout the fairgrounds, especially in the midway and eating areas. In 2018, this overhaul also included replacing portable bathrooms with the cleaner and more comfortable restroom trailers and the addition of a Wine Garden, which created more leisure space, showcased the burgeoning Texas wine industry and produced an additional revenue stream for the fair. “It’s great because it promotes the agriculture and viticulture and wine industry and adds value to that area of the fairgrounds. With more leisure spaces, our attendees have time to sit and rejuvenate and stay longer at the fair.”

Cowley has also led his fair in the better tracking of data, aided by targeted budget increases in market research. “We’re becoming more data driven. We’re learning what our consumers want and look at market segmentation on what to present and who to target with our marketing.”

Economy Better
By most accounts 2018 was a positive if challenging year for the fair industry. On the positive side, the economy was noticeably improved. While economic indicators and anecdotal evidence show a continued upswing in the economy since the great recession, this upwards trajectory has generally been slow and plagued by regional fits and starts. The difference for 2018 was that the improved economy was more clearly evident, unemployment was lower and families had more disposable income.

The New Mexico State Fair moved up from #38 to #30 on the list, recording a record year in attendance, growing at 9.2 with an across-the-board jumps in spending. “The economy was better this year, there’s more money to spend,” said Gary Mourning, General Manager, New Mexico State Fair. “There are more people working. One indicator was that it was harder to get seasonal workers for this year, although we were able to get good quality workers. There was more spending during the fair.”

On the negative side, weather was a significant factor. Heat waves plagued much of the country and severe weather events including hurricanes tormented many fairs this year. In fact, for a handful of fairs, for the first time in their history, some closed a full-day or more due to hurricanes.

The Arizona State Fair is one of the Top 50 fairs that seems emblematic of the 2018 paradox: the region suffered one of the slowest recoveries in the nation until this year, when it seemed to reach the light that appeared to be shining at the end of the tunnel. The result: cautiously optimistic consumers, looking for discounts but ready to spend. “The economy is more stable this year, there is much wider employment,” said Brianda Martinez, . “But we had some very tough years, so people are spending their money wisely and looking for discount promotions. Our vendors were happy, people were spending.”

The improved economy – coupled with the 135 years of community support – enabled the fair to sustain the loss of a day yet still retain a spot on the Top-50 list, albeit dropping down a notch to 15 from 14 in 2017.

The New York Model
A notable 22 fairs experienced an increase in attendance, although a dip compared to 2017 when 31 fairs showed positive attendance gains for 2017. Almost all these uptick fairs made the list last year – the lone exception being the Evergreen State Fair in Monroe, WA who did not make the 2017 cut but their 2018 increase was enough to place them at 50. Admittedly circumstantial evidence, but a reasonable speculation is that rainy weather patterns caused these downward fluctuations in attendance.

Also worth noting is that seven fairs had record years in 2018 – six fairs attained the same status last year. The Great New York State Fair is one of those that had a repeat, in fact, a "threepeat", with three record years in a row. The astounding aspect when comparing the increase is that 2017 was just under 5 percent, while 2018 it was 10.1percent, pushing the annual celebration of everything Empire State up four slots to 9, cracking the top ten. Since 2015, the fair is up an incredible 40.8%!

New York’s economy may have improved but still lags behind many states and the weather while not disastrous, with rainy days and a near-oppressive northeast heatwaves, was less than ideal. What might account for New York’s upward climb up the top-50 fair list? Long-term planning, investment in facilities and operations and a well-funded marketing approach were undoubtedly a major factor. The fair received $120 million in governmental support for a two-phased massive upgrade to the fairgrounds, capped off by a new, state-of-the-art expo center that had its exhibition space debut at this year’s fair.

The 2018 NYSF also benefitted from a $900,000 advertising budget supplemented by additional $1 million from I Love New York, the state’s Department of Tourism. “It was an incredible fair, sometimes everything comes together,” said Frank Zaitshik of Wade Shows. “This is our 5th year in a ten year agreement, and it was by far our most successful year, which reflects well on the fair, on the promotions they had and the vision of the people at the Department of Agriculture and Tourism had. We are just one cog in a very big wheel of the transformation set in motion under Troy Waffner.”

“The Governor told me that he will give us the tools to build a fair, and with the exposition center, it makes the fairgrounds more of a year-round destination,” said Waffner, who was finally named Fair Director after several years in the Acting Director role.

Minnesota Medals
The Minnesota State Fair had three record years in a row and its 2018 uptick of 2.5 percent was enough to lift the event into the top three fairs. If this was the Olympics, the Great Lakes State Great Get Together finally medaled. Jerry Hammer, Executive Vice-President and General Manager, claims that you “can’t plan for a record year” – which may technically be true, but a fair can plan for continued success with the combination of facility upgrades and more thought out marketing. According to Hammer, the turning point was three years ago when the fair completed extensive upgrades to its West End Market, an under-utilized cul-de-sac with some buildings dating back to the 1930s, although most of this area was relabeled Heritage Square in the 1960s, “It didn’t offer anything new,” said Hammer.

The fair brought this section into the 21st century with not only a new entertainment stage, Minnesota State Fair Museum vending areas and food-vendors, essentially creating a new destination within the fair; they constructed a transit hub, corresponding to the changing demographics of the Minnesota. The Transit Hub was tied the regional mass transit system and gradually fairgoers found that taking the bus to the fair was actually more convenient, less-time consuming and cheaper than driving their vehicles. “We stayed current when we made the commitment to build the West End Market,” said Hammer. “Half the people coming to the fair are not driving cars now so that area was a social change too.”

Another component of this new neighborhood was capitalizing on the craft beer explosion, which has grown from 40 brands to more than 500. In addition, this staying current like other top-performing fairs on the list, also meant a revamped marketing campaign. The Minnesota State Fair recorded more than a billion impressions across all its social media platforms. “You want to stay up, you want to stay current,” said Hammer. “We have constantly upgraded our fairgrounds, what you want to do to plan ahead, plan for the long term and put your patron first. You also want to be edgy and loud. In the West End Market, our free stage shows have people like Tower of Power, George Clinton and the Pointer Sisters. Where else can you see those acts for a $14 gate admission?”

Due mainly to its heartland pedigree as a Midwest fair, the Minnesota State Fair is one of the most iconic fairs in the U.S. “We’ve been able to track our fairgoers better because of digital technology, and we are getting people from all 50 states, as well as from overseas, including the Netherlands and the United Kingdom. What you want to do is give people a reason to explore the fair.”