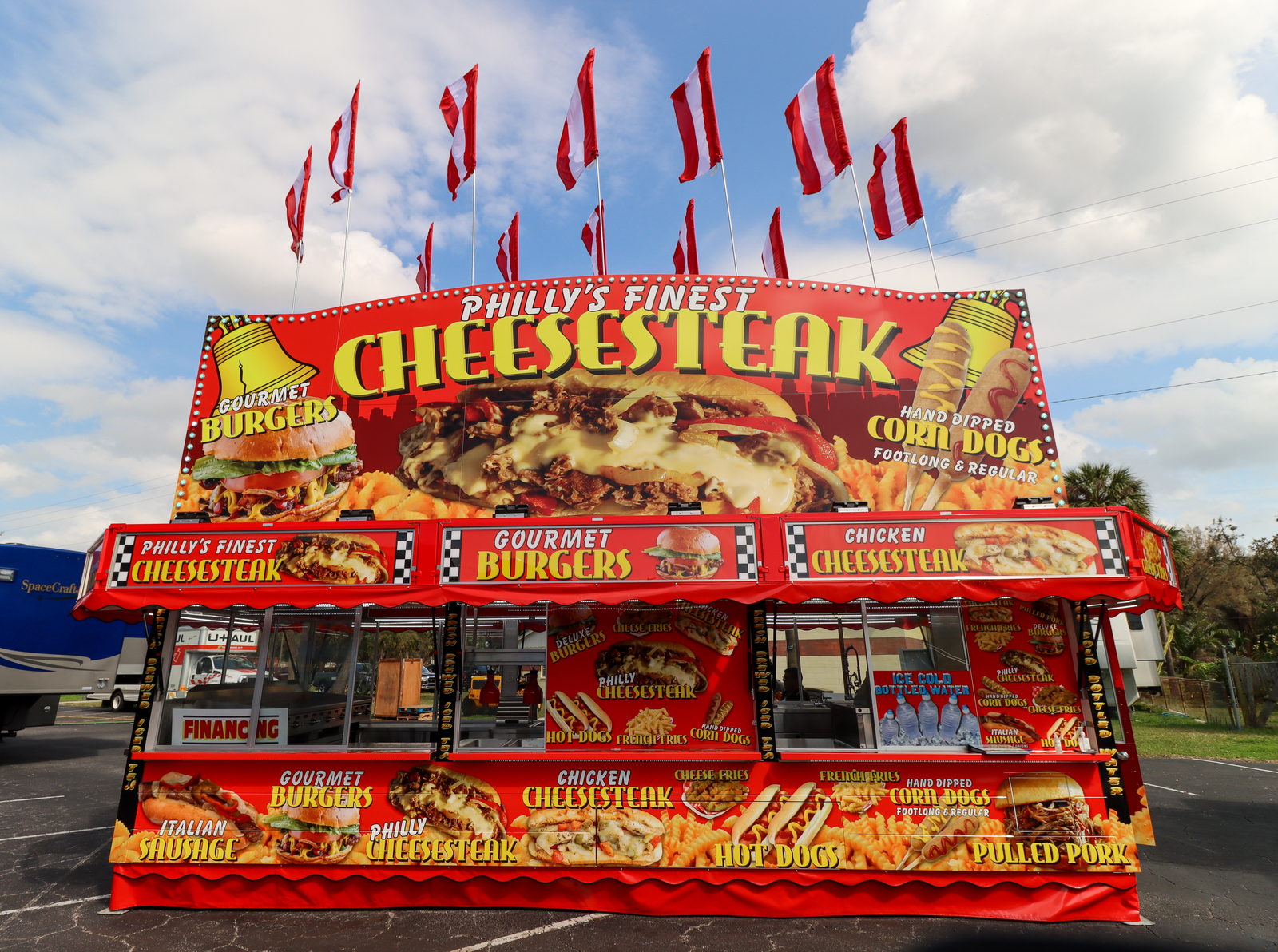 Gautier Mfg Reports Positive Trade Show Results
Even with light traffic and an uncertain season, the concession manufacturer was able to report several sales from the show.

The third day of the IISF Trade show had beautiful Florida weather.  The sun shone and temperatures reached 85 degrees as amusement business professionals and suppliers enjoyed interacting with one another again, sharing hope for the coming season.

There was optimism in the air as word of reopening in New York spread throughout the crowd.  Governor Cuomo announced yesterday that New York entertainment centers, amusement parks and summer camps would be allowed to reopen this spring and summer with certain restrictions including contact tracing, masks and advance ticketing/reservations.  Carnivals are said to be included in the new guidelines which are expected shortly.

With New York being one of the most restrictive states for the amusement business during the Pandemic, news of opening led many to believe spring and summer events will be on the table in most areas of the country. 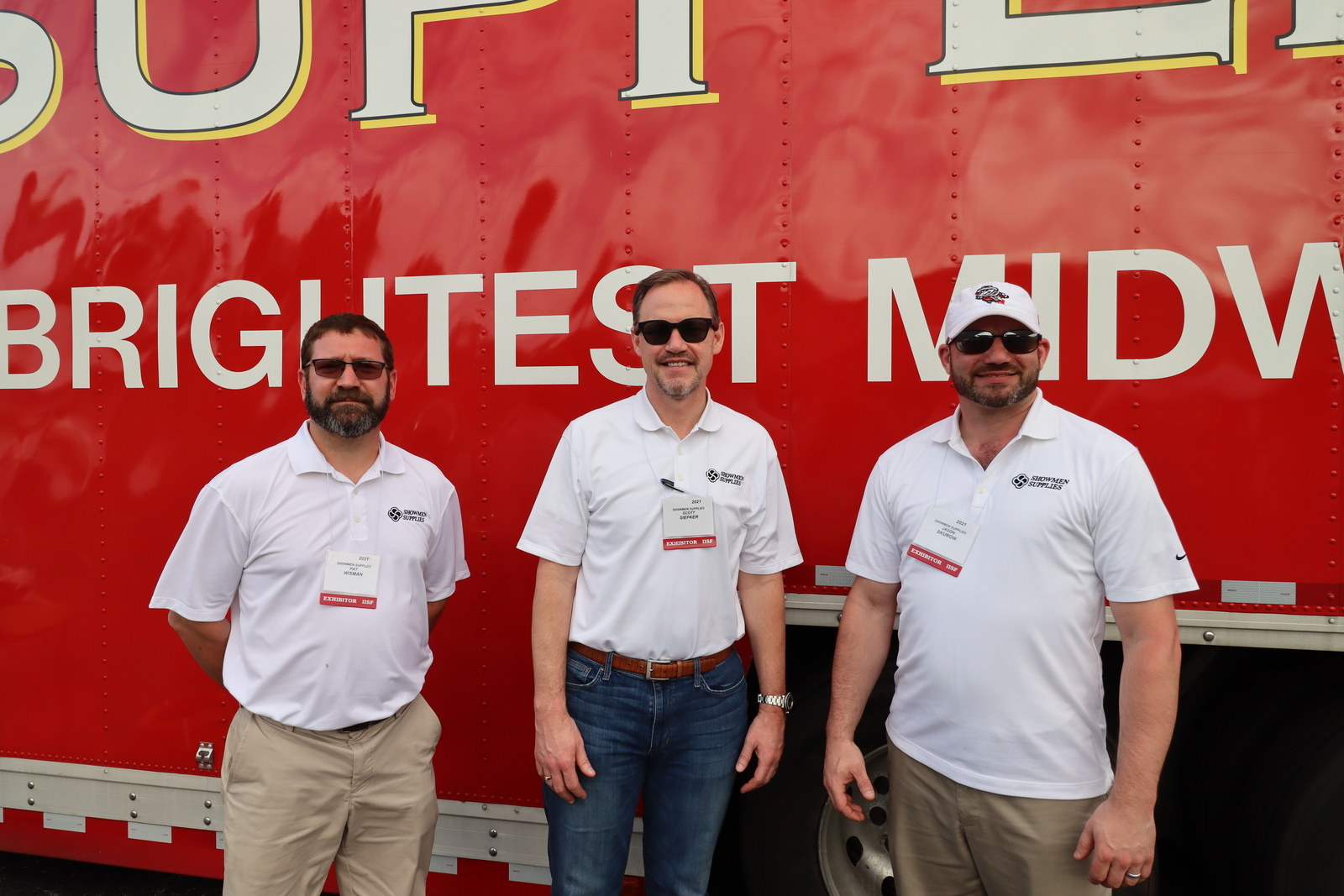 Showmen Supplies was on hand during the show, staffed by Pat Weisman (left), Scott Siefker, and Jason Skurow.  The company has been busy ramping up its ride parts devision for a hopeful 2021 reopening in most parts of the country.

In preparation for opening, companies like Elite Service/Marquis XT are hoping to help pave the way for events to open.  Samantha DeBello, of the American-made hand sanitizer company, said she and her company developed portable hand sanitizer stations for the outdoor amusement industry.  They entered the industry helping Pumpkin Patches open in Illinois and one of their clients in the food business, Lee Stevens, President of the IISA, invited them to exhibit at the trade show.

The company, along with sanitizer supplier Marquis XT, wound up sponsoring the hand sanitizing stations at the trade show and providing sanitizer bottles at the door.

Elite's products are hospital grade and the gel contains 70% ethanol alcohol, and the liquid 80%, for maximum efficiency.

Elite is hoping to reach small events, concessionaires, fairs and speedways with their hand sanitizing product and portable dispensing stations.  The station can hold up to 4 gallons of sanitizer at a time loaded in the sleeve.

DeBello said she has had quite a bit of interest from concessionaires and vendors, with many taking supply home with them.  “We can ship out and resupply very quickly”, she added. 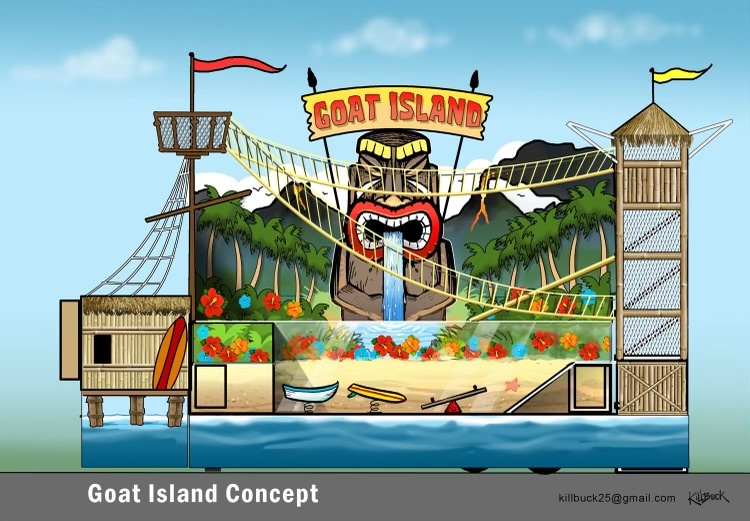 One person not standing still during the Pandemic is Phil Hendricks of Banana Derby Fame.  The monkey racing maven didn't work at all in 2020, but managed to make a little income featuring Gilligan the monkey at local restaurants and gatherings in Florida.

Late this year, Hendricks cam up with a concept for an interactive petting-zoo type attraction that could also be an attraction for fairs and festivals, something to fill a void in the entertainment industry.

He came up with the concept of “Goat Island”, a structure with 30' towers and bridges made of aluminum where the animals will climb around the structure in full view midway guests.  The attraction will also have the ability for guests to feed the goats and pet them in corrals just in front of Goat Island.

When Hendricks came up with the concept, he had a rendering made and brought his idea to Jim Frederiksen of Frederiksen Industries.  Frederiksen liked the concept and in November, set about planning and building the 40' structure.  An all aluminum trailer will be able to be compactly folded for transportation.  In February at the trade show, the attraction is almost complete and on display.  It is still waiting to be wrapped and accessorized but the design can be clearly seen.

“It is amazing to me that Fredericksen was able to go from concept to creation so quickly”, said Hendricks.  “From the rendering I gave him, it is now almost competed as I envisioned”, he added.

New enhancements include a volcano that spews smoke at regular intervals and a waterfall that will spray water, making a fun interaction for the whole family.

“The idea is for it to be a continuous exhibit where guests can watch and interact with the animals”, said Hendrricks.  “I will have a kiddie corral at the front to take pictures with the animals and places to pet and feed them”, he added.

Now in his 14th season with the Banana Derby, Hendricks is looking to book both attractions at state and regional fairs.  Having both attractions will help with labor and ease of movement.  He believes that an outdoor exhibit like this, especially in these times, will add to the feeling of health and safety for fair guests.

“I've been on the road the last 23 years studying fairs and attractions.  I think I have found the perfect mix with Goat Island to make fairs and the public very happy.  Its a great attraction for all ages”, he added. 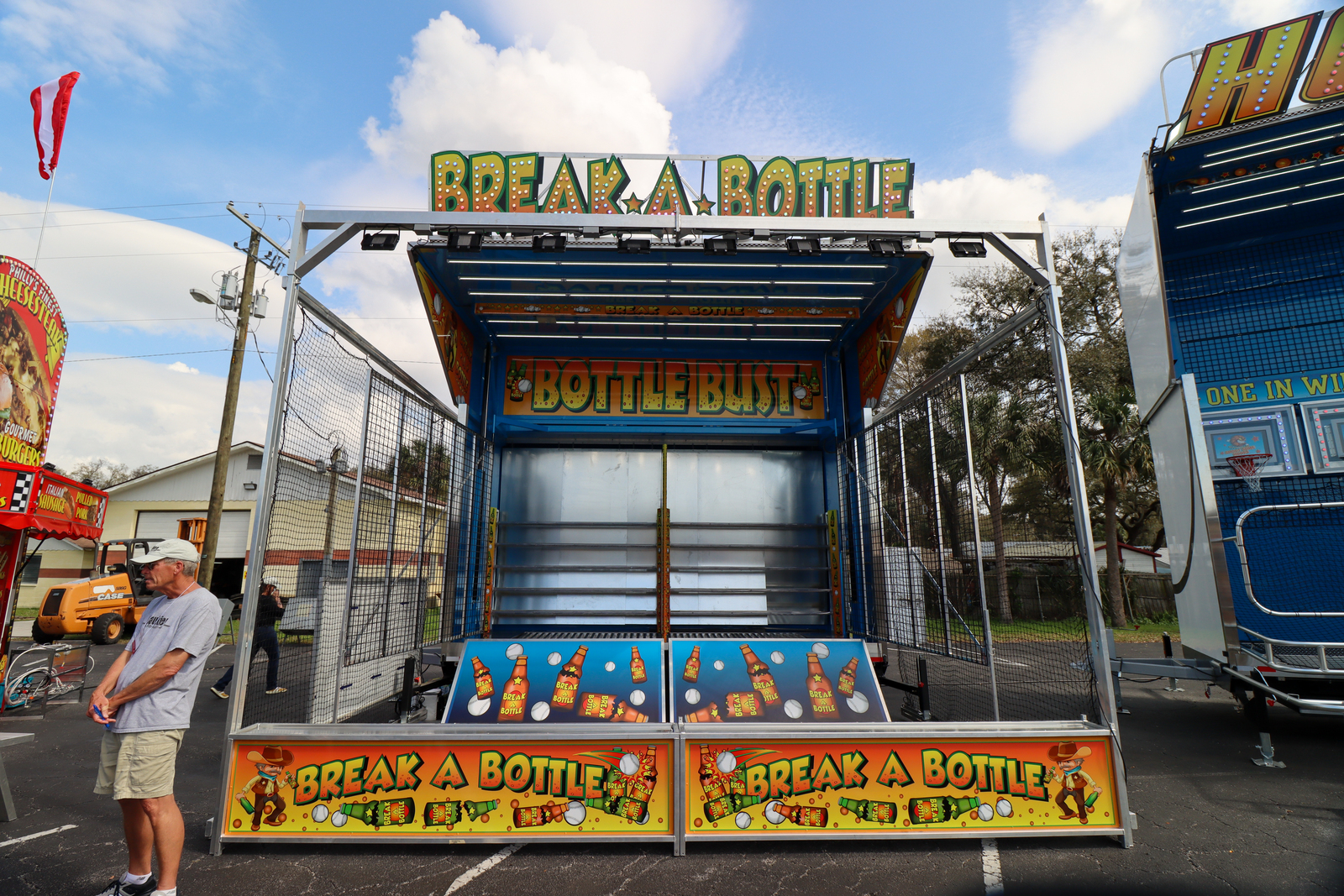 A common theme heard during the show is the difficulty getting financing.  Many of the usual lending sources are not currently doing new deals so customers and manufacturers are having to find alternative financing routes.  For smaller ticket items, cash deals are a little easier to come by but for larger ticket items, financing is an important part fo the sales process.

Soon after the purchase, Duoos and his wife decided to take a trip around the country, visiting 36 or 37 carnivals and concessionaires and getting to know their customers.  The trip netted a set of ticket boxes for Ray Cammack Shows, among other sales.

Gautier is focused on their core business of producing custom food trailers and games as well as providing refurbishment services for existing trailers.  The company, based in Venice, Fl, works with other suppliers, such as Denny's Electronics, to provide lighting and graphics for their trailers and they have developed many partnerships and alliances in the industry.

Seeing the crunch in financing, Duoos arranged for in house financing of his products, something he said has been very helpful in terms of sales here in Gibtown.

“We had a really good show”, said Duoos. “Traffic is down but we have buyers and lots more orders pending opening”, he added.  Duoos stressed that many potential buyers were waiting to pull the trigger on purchasing until they knew they had a solidified route of events and were allowed to open.  “Its the uncertainty about opening that is hurting us”, he said. 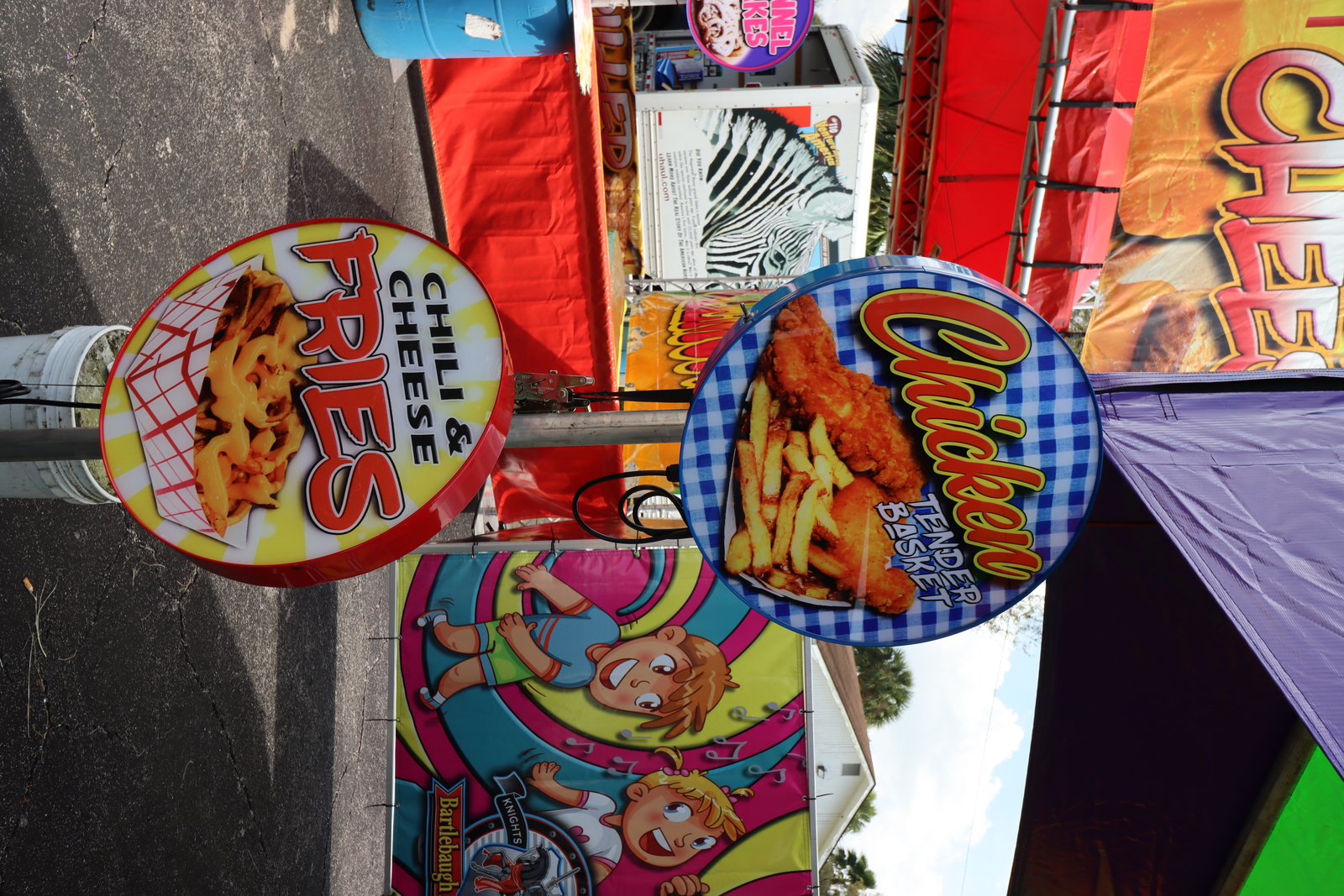 Kenny Smith's Rocken Graphics was showcasing new backlit signs that could be used for a variety of applications.

Even with light traffic and an uncertain season, the concession manufacturer was able to report several sales from the show.