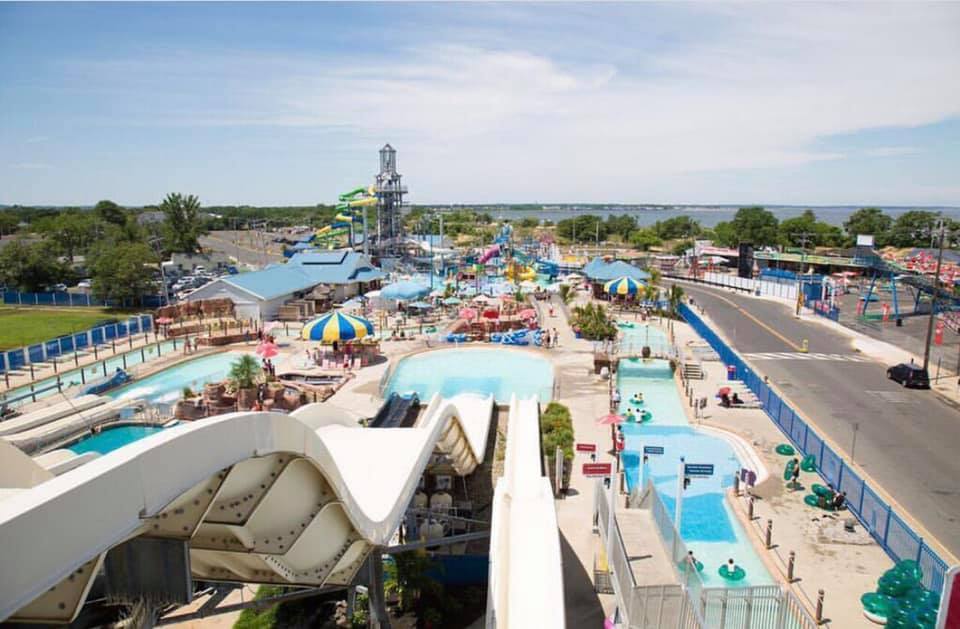 OPENING UNCERTAIN FOR JERSEY SHORE PARKS
Keansburg Amusement Park hopes to salvage at least part of its 2020 season amidst a delayed opening caused by the COVID-19 pandemic.

As the reopening of the American and global economy unfolds, the amusement park industry may well look at the Garden State for inspiration, and perhaps in some sense, a model for recovery after disaster.

Eight years ago this October, an extreme weather event known as Hurricane Sandy ravaged New Jersey, causing more than $70 billion dollars in damage.  New Jersey took the brunt of the damage, and no wonder the term “Jersey Strong” came into usage, reflecting strength of spirit, especially the dozen or so family amusement parks dotting the famed Jersey Shore.

Most of the parks suffered destruction that was near total, but in a matter of months, the facilities were ready to open, a restoration feat the industry still studies. But can Jersey Strong apply to the COVID-19 comeback?

Well, not precisely. Instead of getting ready for opening day post-Sandy, the post-Coronavirus scenario has too many variables still unknown to adequately forecast what the new normal may be for the New Jersey collection of warm-weather amusement parks.


“We were very resilient, and after Sandy, we had six months to prepare for opening day and all our members were ready,” said Kimberle Rolle Samarelli, Executive Director, New Jersey Attractions Association (NJAA). “With this pandemic, we have no timeframe to follow, at least not yet. With amusement parks, it's not just the rides, but food and other attractions; it's an entire operation and all the staff that requires. And, we have no way of knowing what the business will be when we are allowed to open.”

New Jersey is second in the nation only to its neighbor New York in terms of the amount of Coronavirus infections and deaths.  Since mid-March when the President issued the National State of Emergency placing the country under lockdown and quarantine conditions.  New Jersey Amusement parks were on the brink of opening when the new regulations were imposed, bringing the preparations to a halt.

While the summer remains the peak of the season for these parks, the opening weekends  on Palm and Easter Sundays, are among the best days of the year, benefiting from the pent-up demand building up over the course of a winter. For amusement parks, the ramp-up includes new ride installations, refurbishment, maintenance and inspection routines, filling food and souvenir inventory, and hiring their seasonal workforce.

The Keansburg Amusement Park & Runaway Rapids Waterpark is one of the dozen or so family-owned amusement park complexes left in the shutdown lurch. The facility includes more than 40 rides, three bars, four ice cream stands and five food concessionaires, hiring approximately 500 a year, with at least 300 required for the opening weekends. 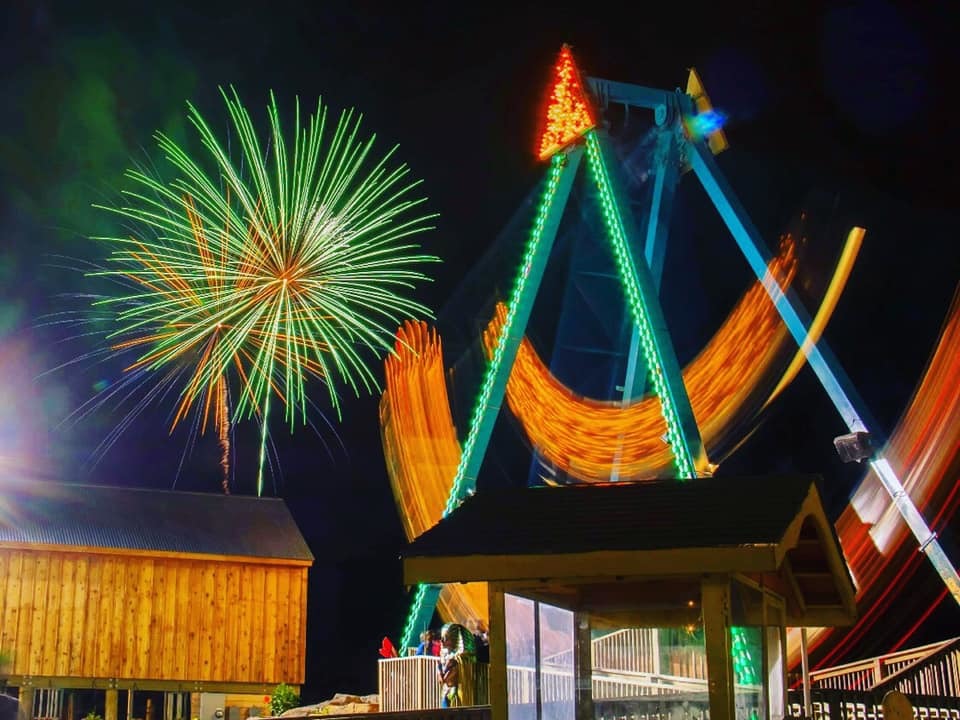 
“We had just started the interviews,” said Bill Gehlhaus, co-owner of the Keansburg Amusement Park complex. “We laid off all our help except for a few key exceptions. We are trying to button up the rest of the park.”

The park may not have opened in April but state ride inspectors are still completing their audits, coming up to four times a week to complete the final inspections. The handful of staff practice safe social distancing, wear masks and take other necessary precautions as they complete routine maintenance.

“We are on standby,” he explained. “Palm Sunday and Easter, if not the biggest, are the second biggest days of the season. We had tickets on sale. Where we're located, on Raritan Bay, would have been filled with people. There were some people up on the beach, walking around, but it's a long stretch of nothing. There's nothing more depressing than amusement areas without the people. It's a ghost town.”

In the meantime, staying abreast of the latest COVID-19 news and investigating the bailout and stimulus programs takes up much of his workday. “For the government plans, it looks like you have to jump through hoops, but we're keeping on top of it. Our association (NJAA) meets once a week and we discuss the government plans and the state's inspectors.”

“If you are in this business, you are by nature an optimist,” said Gehlhaus. “From our perspective, it's better to have a half a loaf, half our season, that's what we're hoping for.”

According to Samarelli, although the association includes two corporate parks – a Six Flags and the recently opened America Dream, 95 percent of the membership are family-owned, owner/operator business.  “It's very traumatic, but it's state wide. Tourism is the second largest revenue source for in the state, so a lot of people are hurting. “

The association is working with other trade associations, such as the International Association of Amusement Parks & Attractions (IAAPA), as well as lobbyists and other officials. Samarelli:  “We are in constant communication, trying to understand the latest on COVID-19, as well as our biggest question, will we have a 2020 season?”

Although daunting, N.J. Amusement Parks had six months to recover from the extreme weather event and prepare for opening day. “But this time, we have no time frame,” said Samarelli. “ When or if we do get back open, I think it could be a very good rest of the season, I think people will want to stay close to home. But, people will have a wait and see attitude, will people be thinking about the six-foot social distancing, will there be more sanitation stations?”

It's not just a question of when or if. The controversial partial re-openings occurring in some cities and states still prohibit gatherings of more than 10 people and only apply to certain business and spaces, mostly limited to public parks. 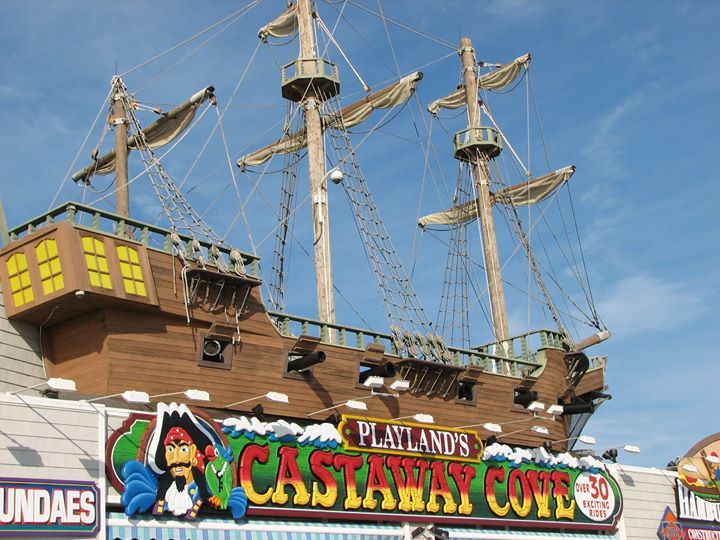 “I'm hoping we are getting July and August,” said Scott Simpson, owner, Playland Castaway Cove. “There's lot of really smart pharmaceutical companies in the state, I hope one of them finds a drug. I hope somebody figures out a way to make the massive amounts of testing units. It's hard to imagine how we can open without a vaccine or without more people being tested. Even if we put the hand sanitizers and have some kind of social distancing, will people still want to come out, will they think they can still get the virus?”

Playland Castaway Cove in Ocean City is a park complex with 32 rides, miniature golf courses, Dairy Queen, Arcade, and pizza restaurant.  They hire about 350 workers, including foreign workers, students from Bulgaria, Jordan, Greece, and Turkey. When not in operation, the park shrink wraps its rides – protecting the metal from the corrosive salt air – and except for routine maintenance and the state inspectors – by mid-April more than 85 percent of the inventory had been inspected – the company is essentially quiet.

“Last year, we had three brand new rides that we added and it was a very heavy refurbishment year,” he said. “That's the hardest part, all my equipment was in way above average condition and it's just been sitting here.”

Once the state allows public spaces to open, the Jersey Strong attitude will be needed once again for the parks to ramp back up  and salvage what's left of the season. Samarelli said the N.J. parks, being family-owned businesses, would need only a few days – probably two weeks – to get back in gear, with the biggest factor limiting the extent of operations is attaining the workforce.

Simpson feels he will be able to operate 80 percent of his rides, with the staff he has on hand, plus a few unfurloughed workers. Rounding out the rest of the workforce may take a little more time, “but we have very reliable workers. I would imagine that with the all the layoffs because of the pandemic, and some of the economic losses, that it might take a while for the economy to fully recover, so there may be more domestic workers looking for work again.”

Foreign guest workers may be problematic, since the processing of visas and the entire system is dependent on foreign embassies, located in countries may have a different rollout schedule. “We've already had a few kids say they wouldn't be working this year, because of the pandemic, they don't want to leave their families.”

Keansburg Amusement Park hopes to salvage at least part of its 2020 season amidst a delayed opening caused by the COVID-19 pandemic.