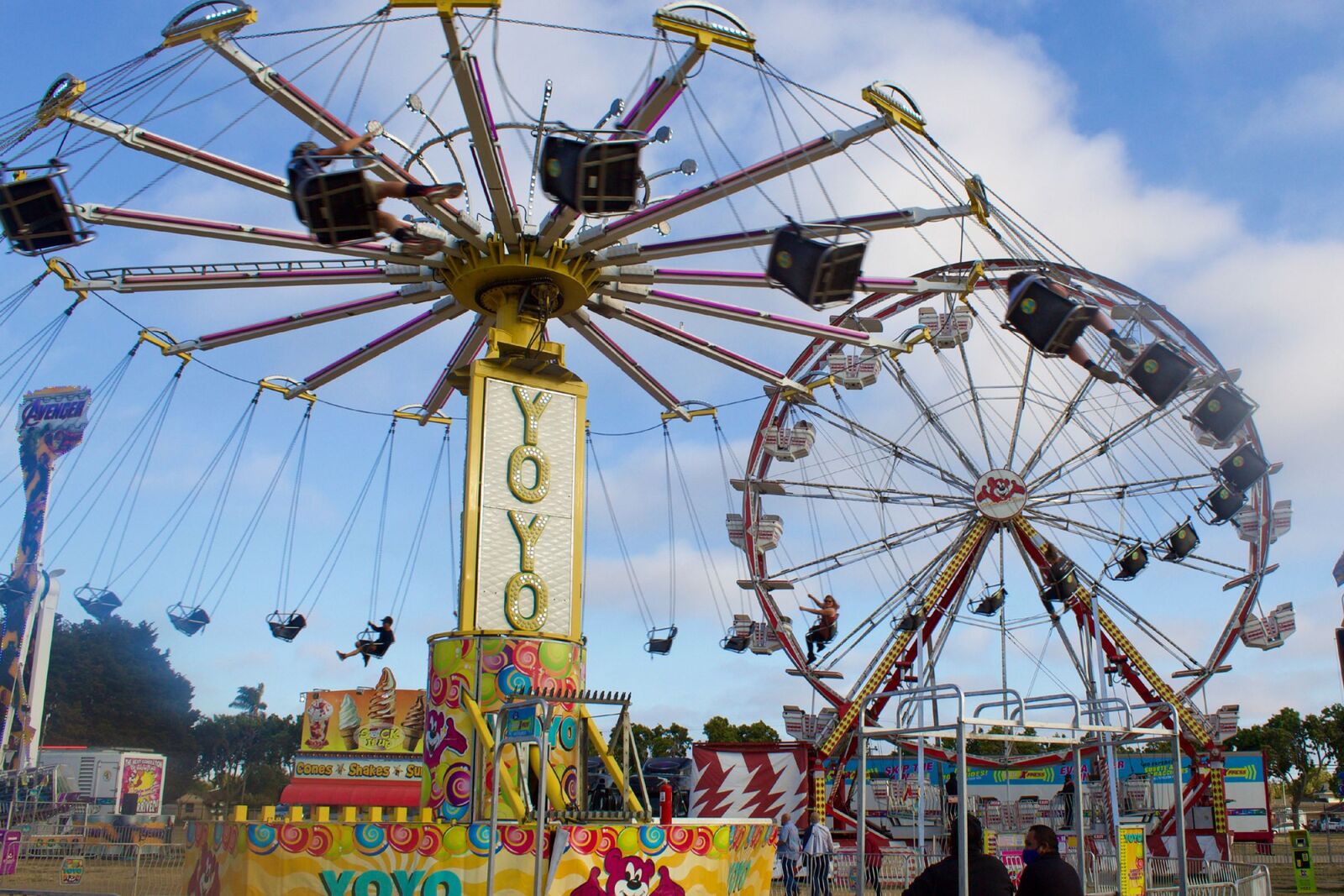 The Santa Barbara County Fair was cancelled for 2021, just as it was in 2020. But, this year, at the fair's Santa Maria Fairpark location, all was not virtual. Instead, the venue hosted the "Helm and Sons Amusements' Greatest Portable Theme Park."

Admission to the park included access to all rides and live entertainment. Attendees could also purchase food items and play carnival games. Pricing was $25 in advance and $30 at the door for kids age 10 and under, $40 for those age 11 and up. The event ran on two weekends, Thursday through Sunday, July 1 through 4 and July 8-11 from 2 to 10 p.m. all days.

Additionally, along with the live amusement ride event, The Santa Barbara County Fair Virtual Livestock Show and Auction was held July 15-16, with cattle, goat, sheep, swine, and a variety of industrial arts exhibits presented by the local 4-H, FFA, and by local independent students.

The live Helm and Sons attractions were a success. The event had an initial slow beginning the first Thursday and Friday, and big crowds over the weekend, especially on the two Saturdays of the event. While masks weren't required for the carnival, capacity limits were in place.

According to the owner of Helm and Sons, Davey Helm, the company was very pleased with the results. “Thursday was a little slow for us, but once we added monster trucks on Friday and Saturday, it was gangbusters. Really a lot of fun.” 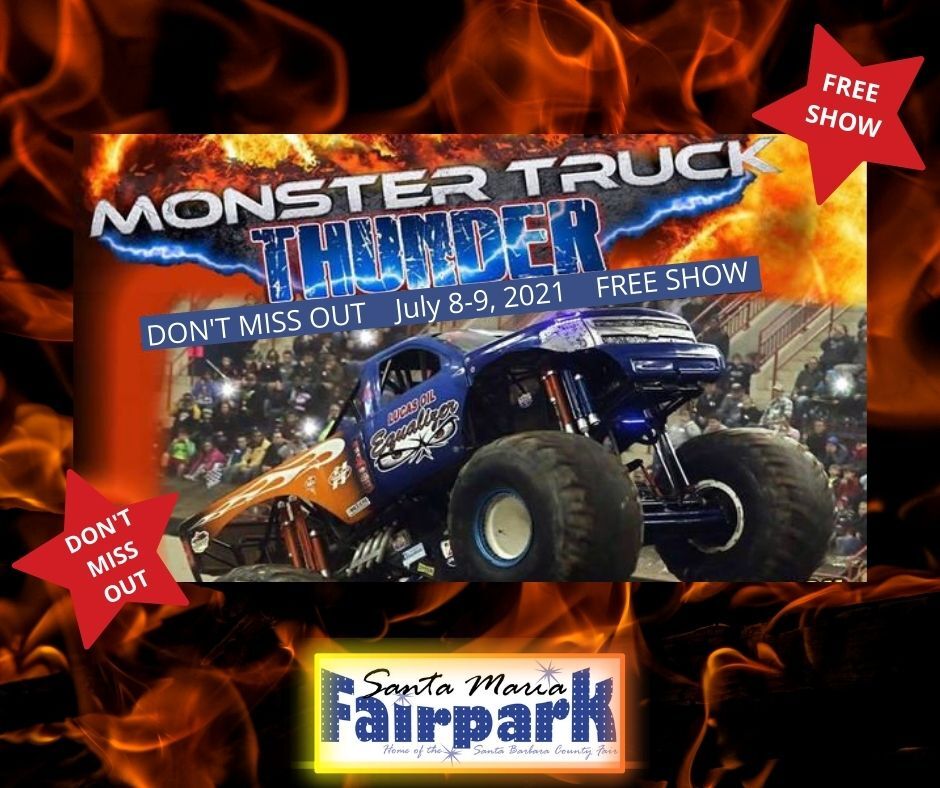 The combination of the virtual livestock shows and auction with the amusement event replaced the Santa Barbara County Fair this year, which experienced its second year in cancellation due to the ongoing pandemic.

Fairpark spokesperson Rebecca Barks was glad to see the in-person event succeed. “Seeing this back, [people] lively and having fun, it's just heartwarming,” Banks said. “It's good. It feels good. It feels right. It feels like we're getting back to what we want to.”

The eight-day amusement event was also important to the Fairpark's survival, as the venue has been struggling since the pandemic shuttered so many scheduled events.

“What we're seeing is a lot more bookings for 2022 of those traditional fundraisers and the annual events we look forward to,” Banks noted, looking toward the future. With many events currently “in the works,” she terms the venue operators as “very excited. We are going to have some more things we're offering to the community in 2021, so I look forward to being able to announce those.”

Banks related that the 2022 dates for the Fairpark's biggest events, the Santa Maria Valley Strawberry Festival and Santa Barbara County Fair will be made soon.
Returning to the July carnival, The Greatest Portable Theme Park was different from a carnival with separate tickets for different rides; instead, the single admission price offered unlimited access to all rides as well as entertainment, including the Cub Country Kids Cave with various activities, games, and rides for the youngest attendees. The Kids Cave included slides, building toys, and a tot-sized bouncer. Capacity was limited for pandemic safety.


In all, there were 28 carnival rides including the most popular attractions, the Century Wheel and the Zipper. The Himalaya and the Fun Slide were also big hits. Along with the rides, miniature golf was available for play and an animatronic appearance by Bubba Bear and the Badland Band provided family fun. For the latter, attendees could sit down and enjoy a musical performance by animatronic characters. Food and carnival games were priced separately.

“From the thrill-seeking [attractions] to the young kid ones, we've got it all,” Barks said.

The event also included a mirror maze, live DJ for dancing, and a variety of giveaways presented throughout each weekend. The spinning DJ Stevie Dub related that it was an “honor and a privilege” to be at the event, and the giveaways were one way to give-back to the community for supporting the event.

Along with the classic rides and games, there were also food vendors providing fair treats including corn dogs and nachos, popcorn, pretzels, funnel cakes, ice cream and lemonade among other traditional favorites.

Helm and Sons held other pop-up carnival events at Santa Anita racetrack in Los Angeles this summer, along with providing rides at the Tulare County Fair and the Malibu Chili Cookoff event. 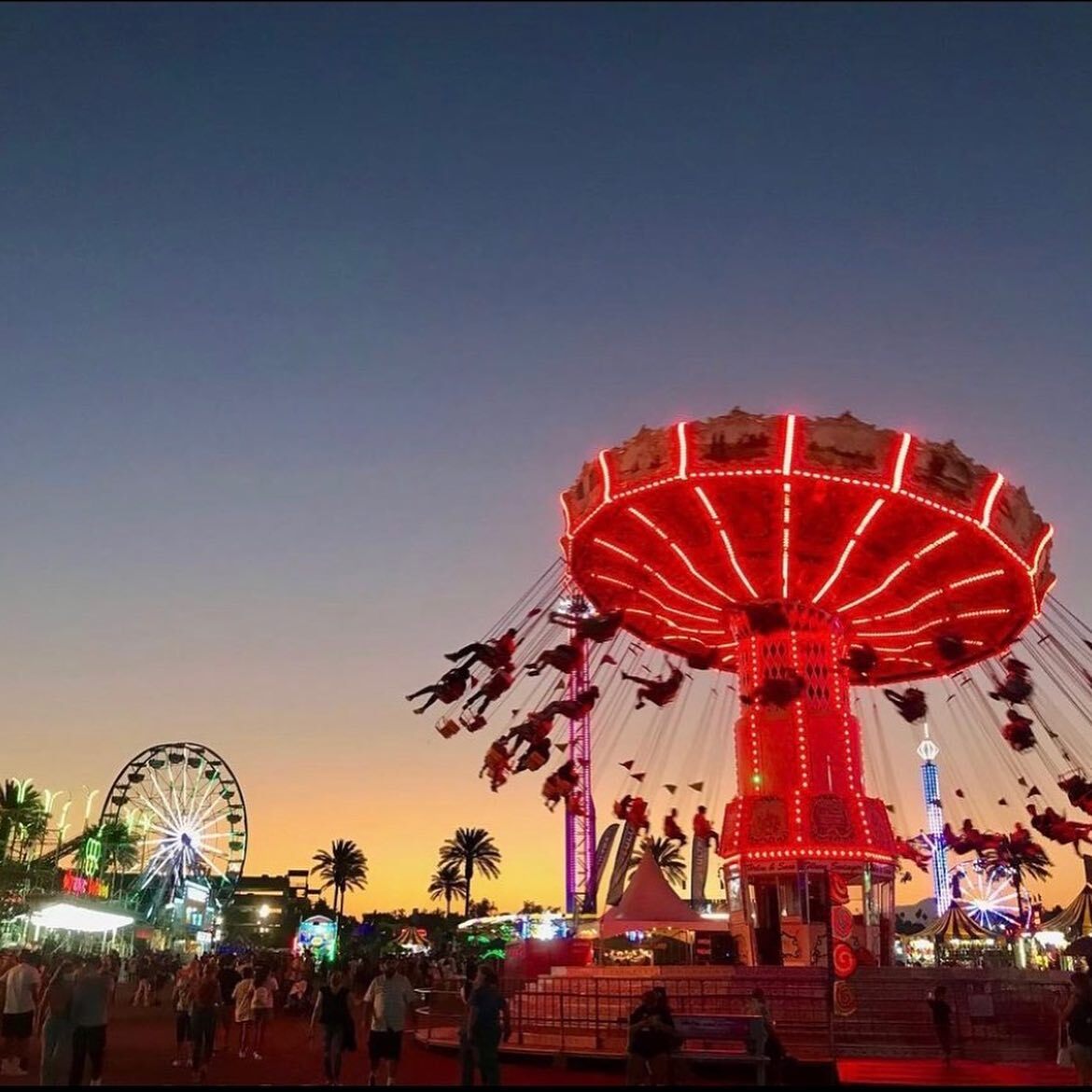 Earlier this year, the fairgrounds hosted a drive through version of the Santa Maria Valley Strawberry Festival April 28th through May 2nd. Called Strawberry Cruzin', the event was a safe way to celebrate the top agricultural crop in Santa Barabara County. From strawberry funnel cakes to Dole Whip strawberry cones, strawberry short cakes, and strawberry frosted cinnamon rolls, the Central Valley fruit was a favorite flavor of the event. Strawberry caramel corn, strawberry agua fresca, and strawberry lemonade were joined by more traditional foods such as giant corn dogs, deep fried oreos, tacos, corn in a cup, and nachos. There was a strawberry-themed coloring contest, too. The Fairgrounds described the Covid-19 safe event a success; along with vendors selling fresh strawberries and six different food vendors, there were also novelty items for sale.

The venue itself was decorated with strawberry themed decorations leading attendees to drive and park at each vendor's booth where they ordered their food items “carhop style,” with the food then delivered to cars directly. Each booth's parking area held eight to ten cars at a time.