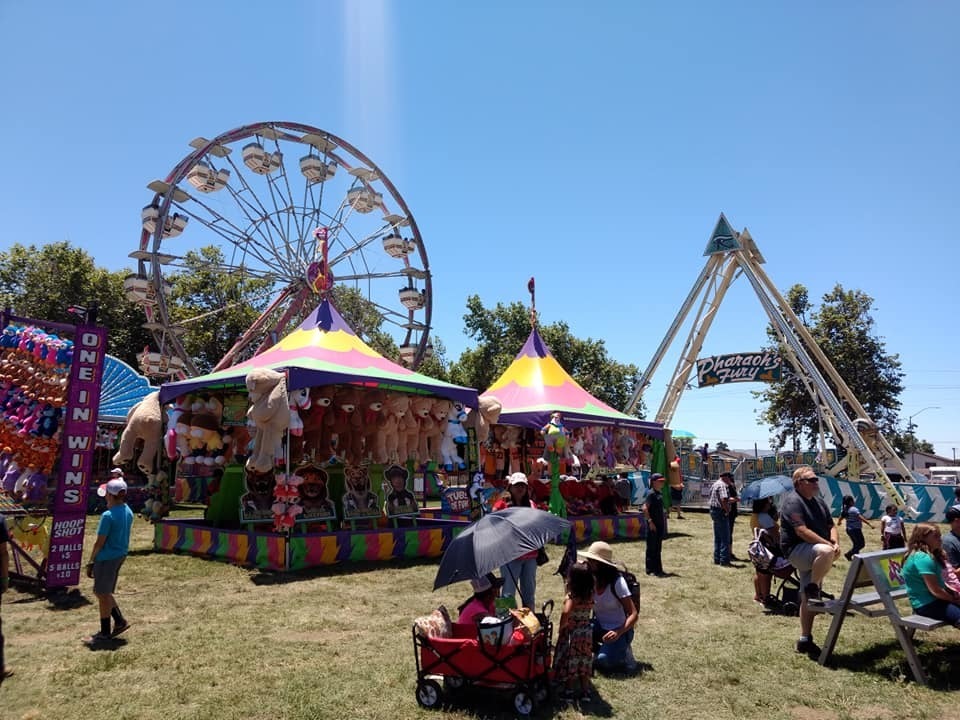 Held in Santa Maria, Calif. at the Santa Maria Fairpark from July 10 through July 14th, the Santa Barbara County Fair rocked out this year, which marked its 128th edition. The fair began in 1891 when it was called the Santa Maria Fair.
With a theme of “Picture the Fun,” musical entertainment was a big part of the successful mix, along with professional rodeo bull riders, and a carnival from Helm & Sons.

While attendance numbers are still not fully tallied, fair officials say attendance was up, and over the first four days of the event, it was up by a solid 6%. Last year, the fair drew 150,000 visitors.

According to Fairpark CEO Richard Persons “With the addition of some big-name attractions like the Professional Bull Riding Classic and a strong concert lineup, we had high hopes for solid attendance and we’re pleased with the turnout.” The pro bull riding event was held at the Budweiser Minetti Arena. Called The Toughest Sport on Dirt,” the event was held Saturday, as bull riders sought to win a portion of $10 million in prize money. General admission to the bull riding was priced at $40, box seats at $65 and $80. Rider Dalton Kasel scored an impressive 93 for his ride on Spotted Demon — the top-ranked bull in the Professional Rodeo Cowboys Association and second-ranked bull in PBR.

The Bud Light Concert Series drew sizable crowds. “We had a stellar lineup,” Persons attests. Acts included TLC, Clay Walker, and Ashanti. The concert series was free with paid admission to the fair. The name acts and free admission made the Main Stage concerts a strong draw; elsewhere at the fair, comedy was also a king with popular acts like the Beastie Creatures and Chef Landry’s Cajun Comedy Show. Musical performances on the Center Stage included the Alan Hancock College Dancers, performers at the fair for 40 years; and the rock, rhythm & blues band, the Drive In Romeos. Central Coast favorites The Molly Ringwald Project, purveyors of 80s hits also pulled in crowds.

In the livestock area, 1,833 animals brought in approximately $2.2 million in sales. The fair’s livestock superintendent, Rick Tomasini calls the competition and judging “one of the most competitive fairs” in the state, with both animal physical traits and owner handling evaluated.

The junior livestock auction, featuring over 1200 animals raised by members of local 4-H Clubs and FFA chapters is the largest in California. Pigs, sheep, and goats were among the most plentiful four-legged fair guests. There were rabbits, heifers, and cavys, too. There was an absence of chickens and turkeys, due to an effort to contain recent outbreaks of Newcastle disease.  Many fairs throughout the state of California have canceled poultry exhibitions for this reason.
More animal-focused entertainment was on hand as well, including the first time at the event for the popular pig races, which were sponsored by Pepsi and drew a big crowd. Rabbit judging, with many contenders beloved pet animals, was also a strong draw. Some bunnies were costumed by their owners; prizes were awarded for the costumes as well as the rabbits themselves.

Children’s activities were also popular, such as the Rabobank presentation of Imagination Gallery’s Wild Science! Exhibit with its selection of hands-on science fun. An antique tractor and equipment exhibit, Extreme Sports Zone, and a dinosaur exhibit also appealed to families.

There was also a hypnotist, and performing bubble artist Sterling the Bubblesmith. Pony rides and a petting zoo presented by Ponyland Amusements added to the fun.

The carnival offered a range of top-drawing rides including popular spinning tea cups, a classic carousel, and Giant Wheel. The Yo Yo, Tornado, and Wind Surf rides were also big hits. The kiddie train ride the Gold Miner, was also popular.  Aside from the carnival, Cowboy Ken’s Rawhide Ranch Trackless Train was also a crowd-pleaser.

As far as food goes, there were a wide range of items at the fair, including standards such as corn dogs, which included some wrapped in bacon, churros, and kettle corn, served in a variety of flavors including offering regular, strawberry, blueberry, cheddar, caramel, spicy cheddar and zebra flavors by the popular G Brothers Kettle Corn.

But there were more unique items that drew hoards of hungry fairgoers as well, such as the deep-fried watermelon served on a stick, from Cardinali’s Wood Fired Barbecue, an award winner that has been featured on a number of television programs and has a patented secret batter. Cardinali’s BBQ ribs, turkey legs, and fries were also strong sellers this year.

The fair has a strong agricultural bent, with animal events from cattle auctions to the rabbit competition drawing crowds. Bushwhacker, termed the world’s best bucking bull was proudly displayed.

The gates opened at noon daily, with the fair running until 10 p.m.  On-site tickets cost $12 for adults and $9 for youths ages 6 to 11 and senior citizens 62 and up. One-day unlimited carnival ride wristbands went for $35. But there were plenty of admission bargains to be had as well, such as half-price admission before 3 p.m. on Thursday and Friday; senior tickets available for just $1 each on Thursday, and free admission on Saturday for military and law enforcement members. On Wednesday, carnival tickets were just $1 per ride. Sunday July 14th had a special theme: fiesta entertainment, providing a lively finale to the exhibition. 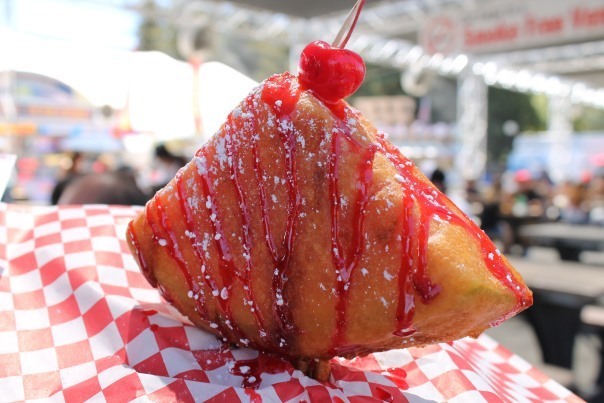 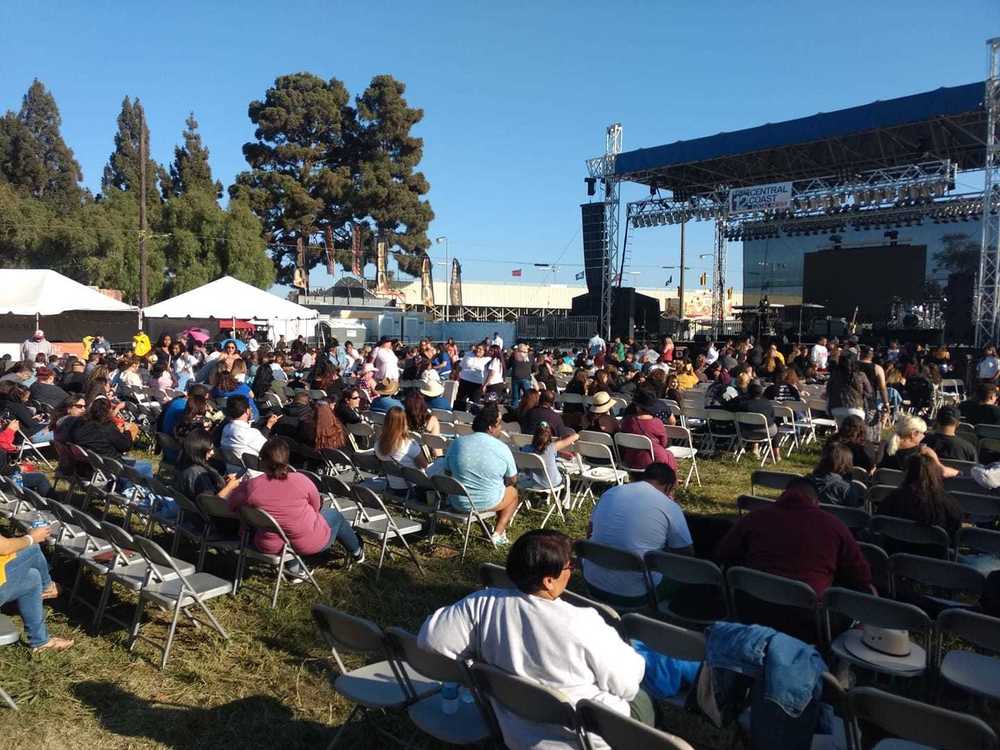 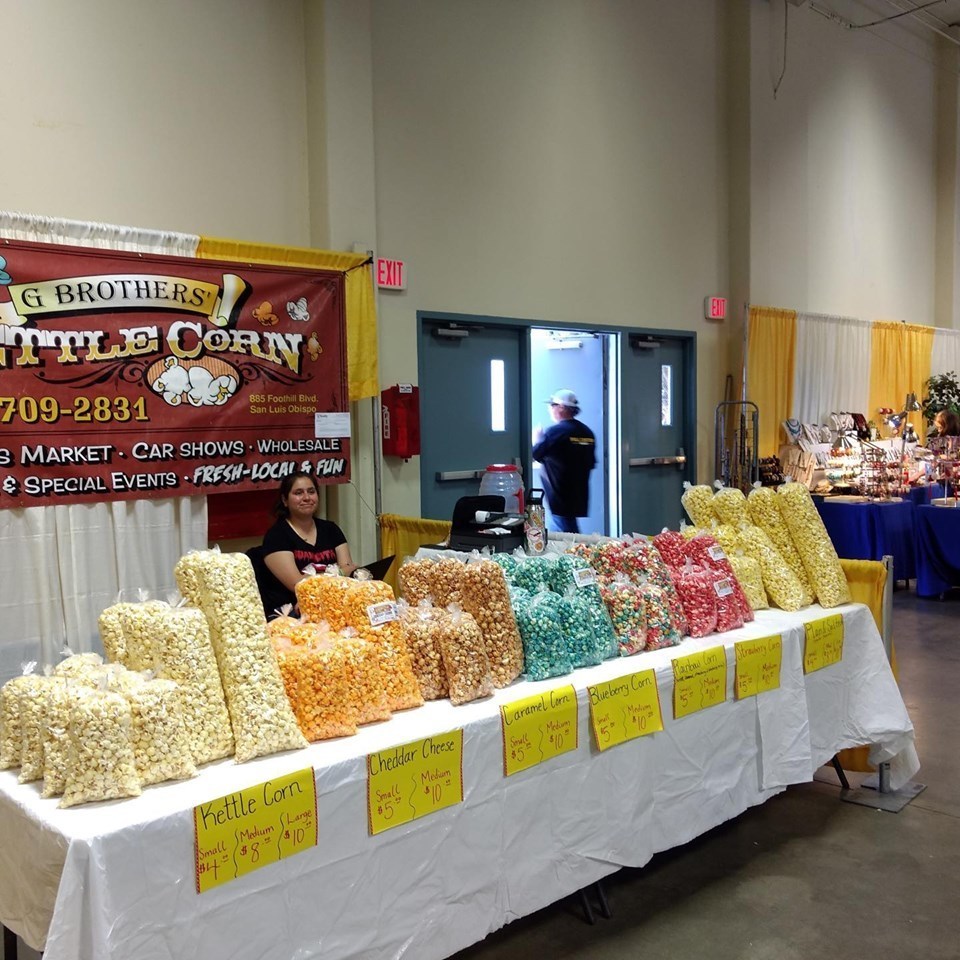