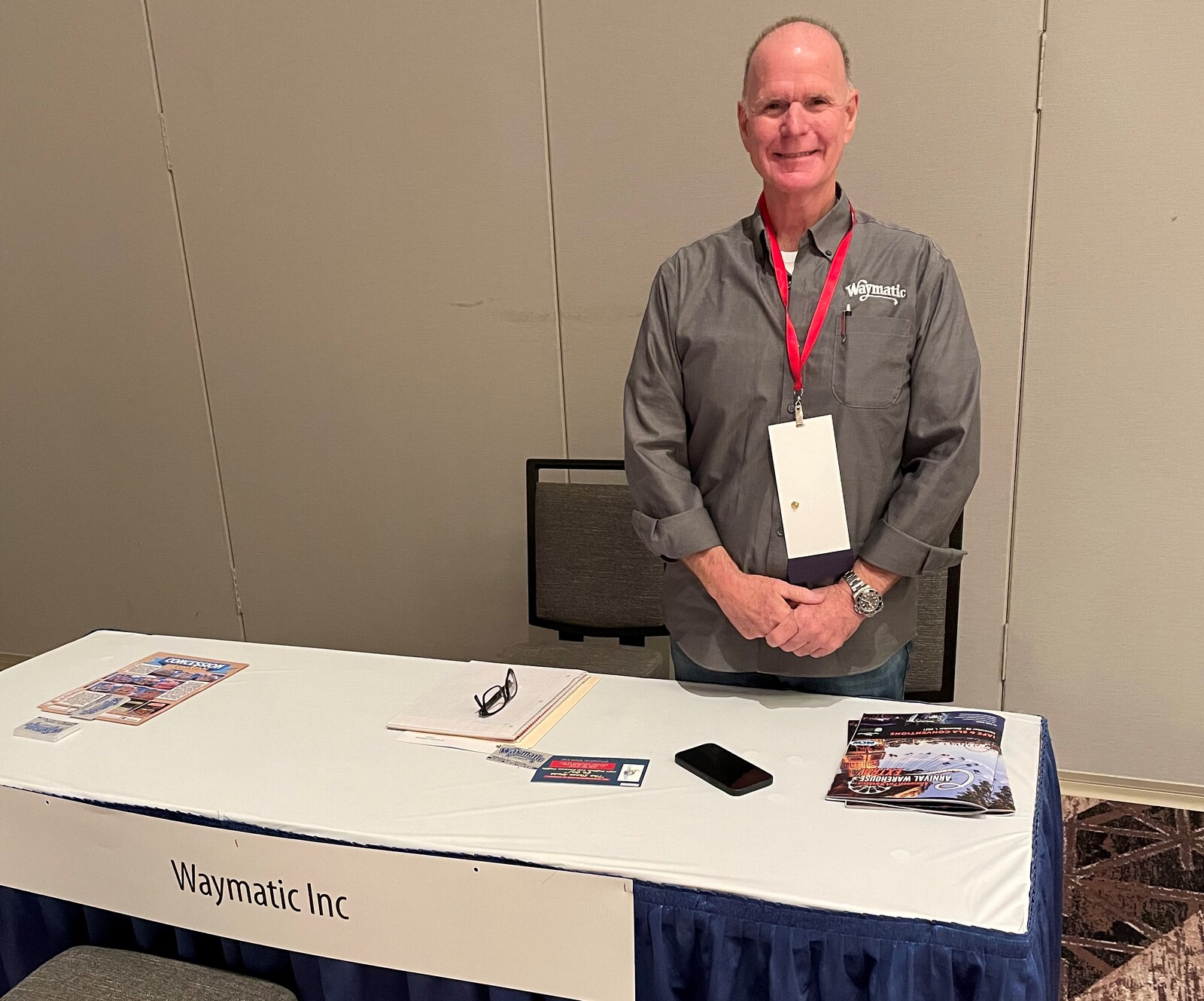 The IAFE Trade Show and Showmen's League Exhibitors Lounge show have run separately, but during the same time for the last several years.  The SLA show has been popular with carnival owners and manufacturers as a no-frills opportunity to spend some quality time with carnival owners and vendors for the manufacturers.  While the show, held at the Marriott River Center this year, has never been known for large amounts of traffic but rather, for the quality of the interactions between vendors and buyers. This year however, traffic suffered as some carnival owners and vendors chose to skip the show.

Waymatic is a food vendor who has attended the show since 1970.  Last year was the first time they missed a convention in 50 years, but they were back in 2021 to speak with clients old and new.  David Easterwood runs the company, the second generation of his family to do so.  His daughter, the third generation of owners, has been working alongside her father, providing generation of continuity in this family business.

Battech was also on hand at the SLA show, where they were proud to announce the sale of a new Cliffhanger at the recently completed IAAPA convention in Orlando.  In addition to the Cliffhanger sale, the company booked several other refurbishment projects making the 2021 IAAPA show one of the most productive they have had.  While the SLA show this year did not generate as much traffic, there were a few contacts made that will hopefully develop into sales down the line. 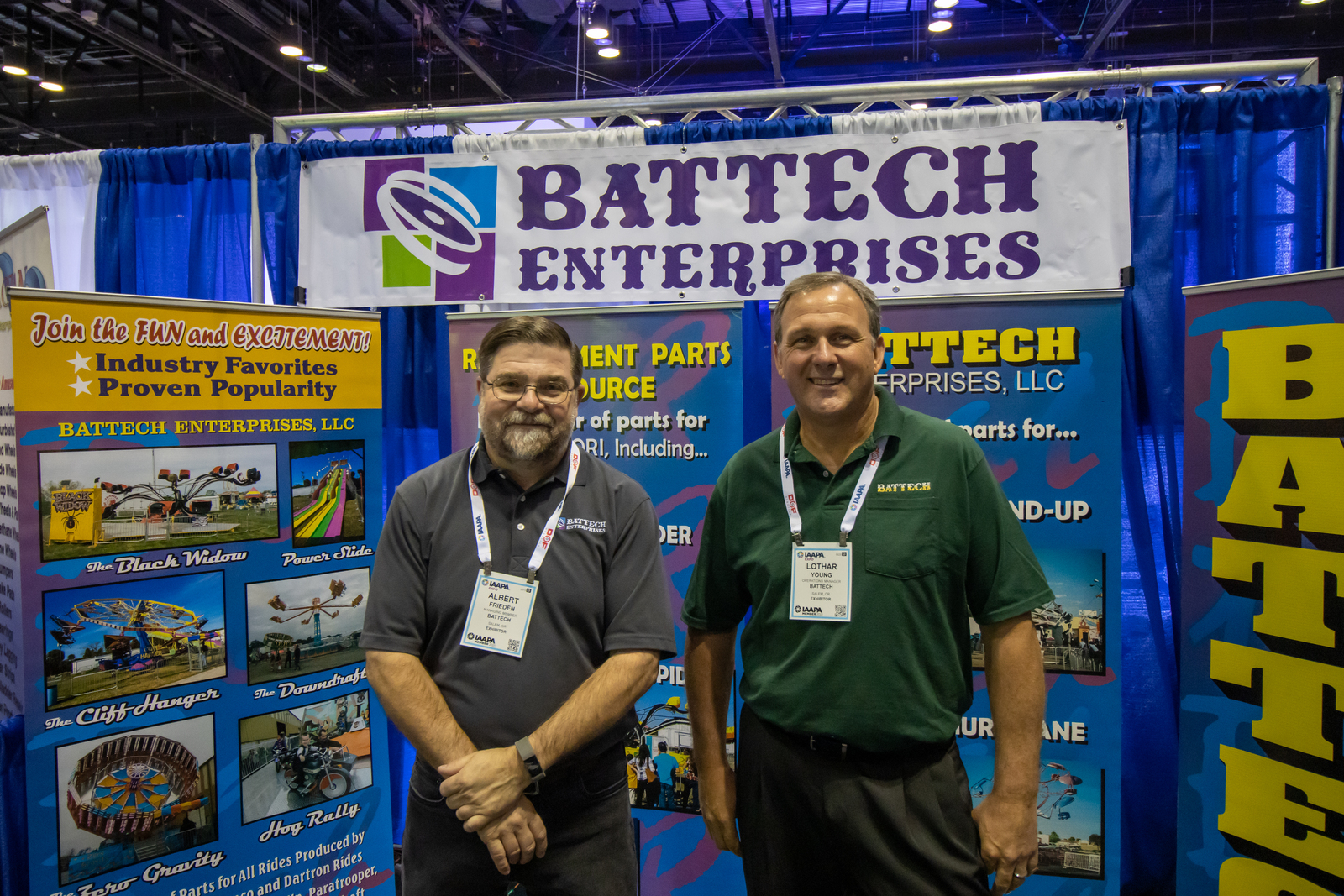 Goldstar Manufacturing does refurbishment projects for “spin rides” such as Berry Go Rounds, Dizzy Dragons and builds replacement vehicles for existing spin ride bases, including the giant puppy themed "Puppy Roll".  The company's projects were canceled in 2020 due to the Pandemic, but things have steadily improved to a near-normal phase.  Repair jobs are coming in recently, but the company now faces challenges with materials.  Due to supply shortages, the company is forced to wait for supplies in many cases and to keep prices from increasing, quick decisions must be made before prices for materials increase.  There are also longer lead times to get the supplies. 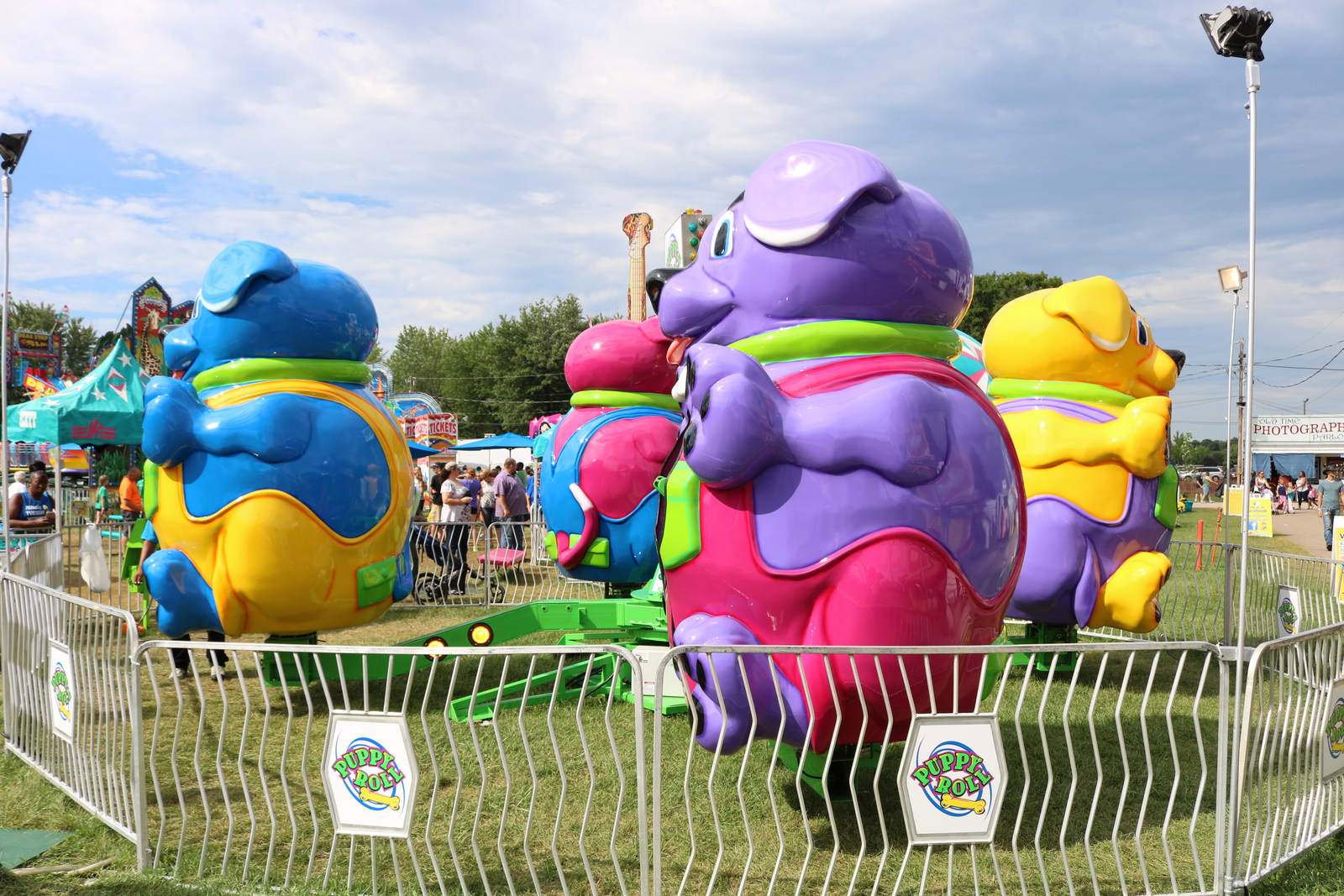 Davey Helm of Helm and Sons Amusements was one carnival owner who made a point to attend the convention in San Antonio.  Helm said he was the first carnival to open in California during the Pandemic.  After operating discretely, but safely, in Arizona and Nevada, Helm believed he could safely open in California in April of 2021 using the same safety protocols he put in place in other states.

After obtaining seven permits, up from the pre-Covid usual of three, Helm thought he was ready to operate.  He developed a plan where every ride, game and attraction had hand sanitizers, he purchased 15 haze machines to prevent virus spread, he vaccinated his entire staff and he had a a crew of three shut down rides periodically for deep cleaning.

The event, which his company produced, was scheduled to run for five weekends.  Capacity for the event was limited to 2,000 people per session with multiple turn overs during operating hours.   Tickets were sold online to prevent interaction between customers and employees.

With all the precautions in place, permits pulled and preparations made, Helm was ready to get the amusement business open in California once again — until the police came and threatened Helm with jail if he opened.  Temporarily stunned by the ultimatum, Helm spoke with his wife and the couple decided to move forward with opening despite the threats.

Fortunately, opening day came and went without incident and the event was a big success.  As crowds swelled over the five-week period, the show was met with ever increasing lines and crowds grateful to have an opportunity to enjoy some amusement with their families.

By the fifth week however, lines had become very long and the parking lot unmanageable, with 2 hours lines to get in.  The town's mayor visited the site and decided to pull the permits and close the show on Saturday of closing weekend.   He allowed a couple of hours to disburse the crowds before closing the event.  After an initial period of disappointment, Helm was enthused by the success of the event and grateful that he was able to operate once again in California.

Using the template of this first event, Helm and his wife rented parking lots and fairgrounds for other events, making a route of promoted events in addition to the handful of sponsored events that decided to run along their route.

The promoted events were very successful, leading to a great season that continues through November.

Buoyed by the success of the 2021 season, Helm purchased three new rides from KMG at the IAAPA convention: an Inversion, a Speed and a Crazy Mouse.  In addition, the company is adding 9 kiddie rides to their ride arsenal which now is over 90 rides strong. 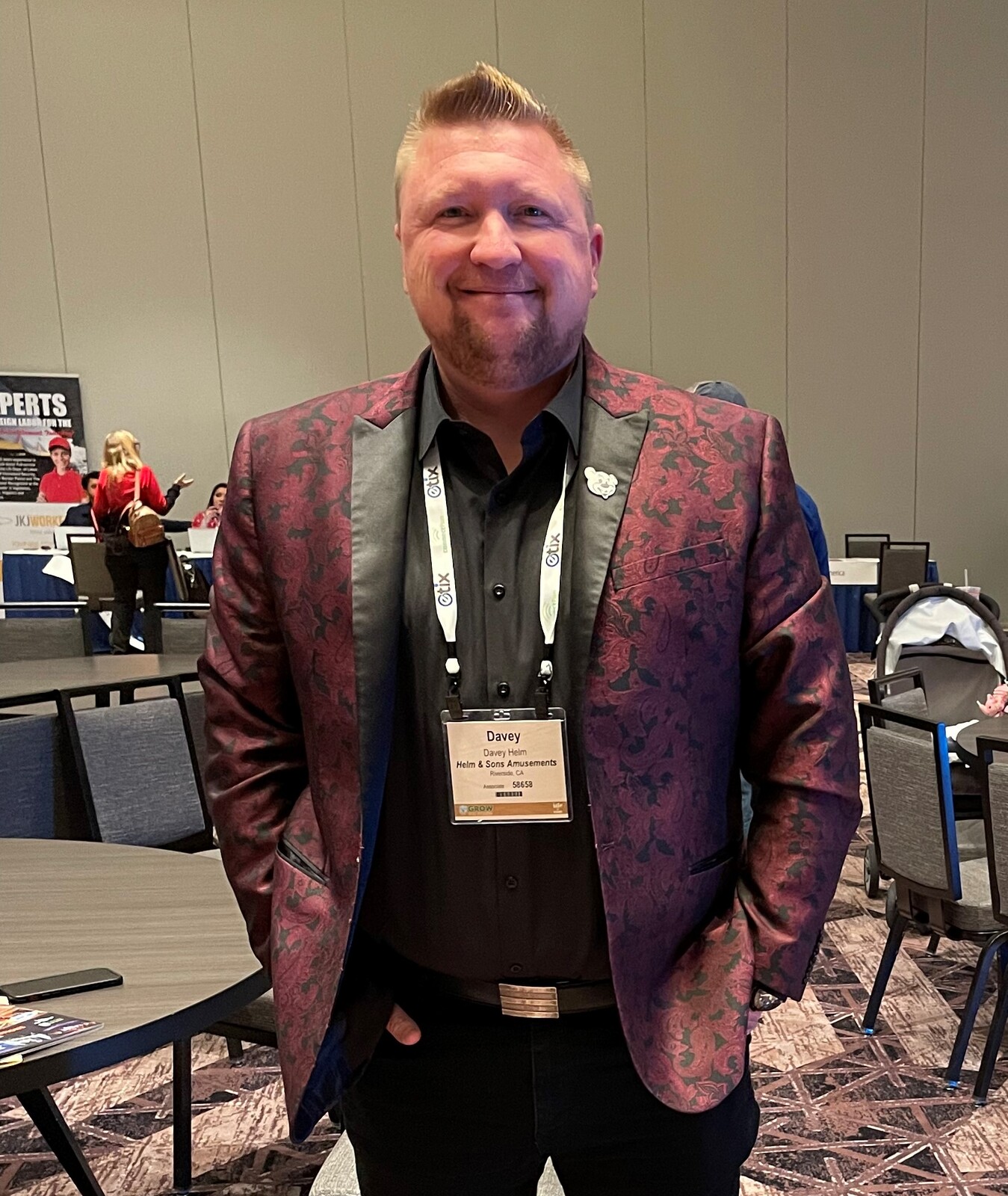 After a busy season of fairs and events, along with the challenges of labor shortages, the Powers team decided to add to the decorations at Corky and Debbie Powers' private residence in Lumberton, NC.  The house already has 32 — 20 foot tall Christmas trees, pole lights and elaborate decorations and ornaments.   To add to the excitement however, Corky Powers came up the idea of making his Mega Drop into a 100+ tall tree.

Debbie and Corky tasked their son Phil Corl with turning the ride into a one-of-a-kind Christmas attraction.  Corl sourced lights and accessories, finding 150 foot strands of rope lights.  About 60 spools were purchased with two separate strands for the ball on top of the ride. 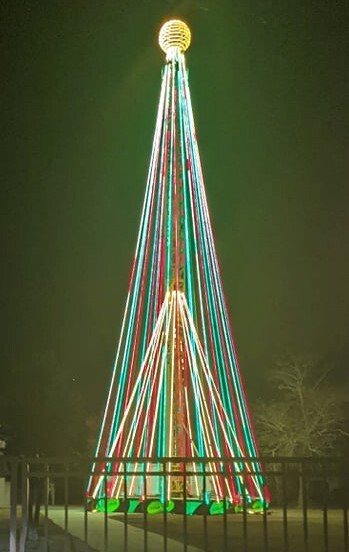 A crew of three spent two days transforming the ride into a Christmas attraction.

When the lights went on Thanksgiving night, the effect on the road was immediately noticeable.   According to Corl, people stop in their cars along Hwy. 72 to view the spectacular lights.  The ride is a big hit in the community and people pull off the road just to watch the lights.

This gift to the local community, provided by the Powers family, is scheduled to run through New Year's Day. 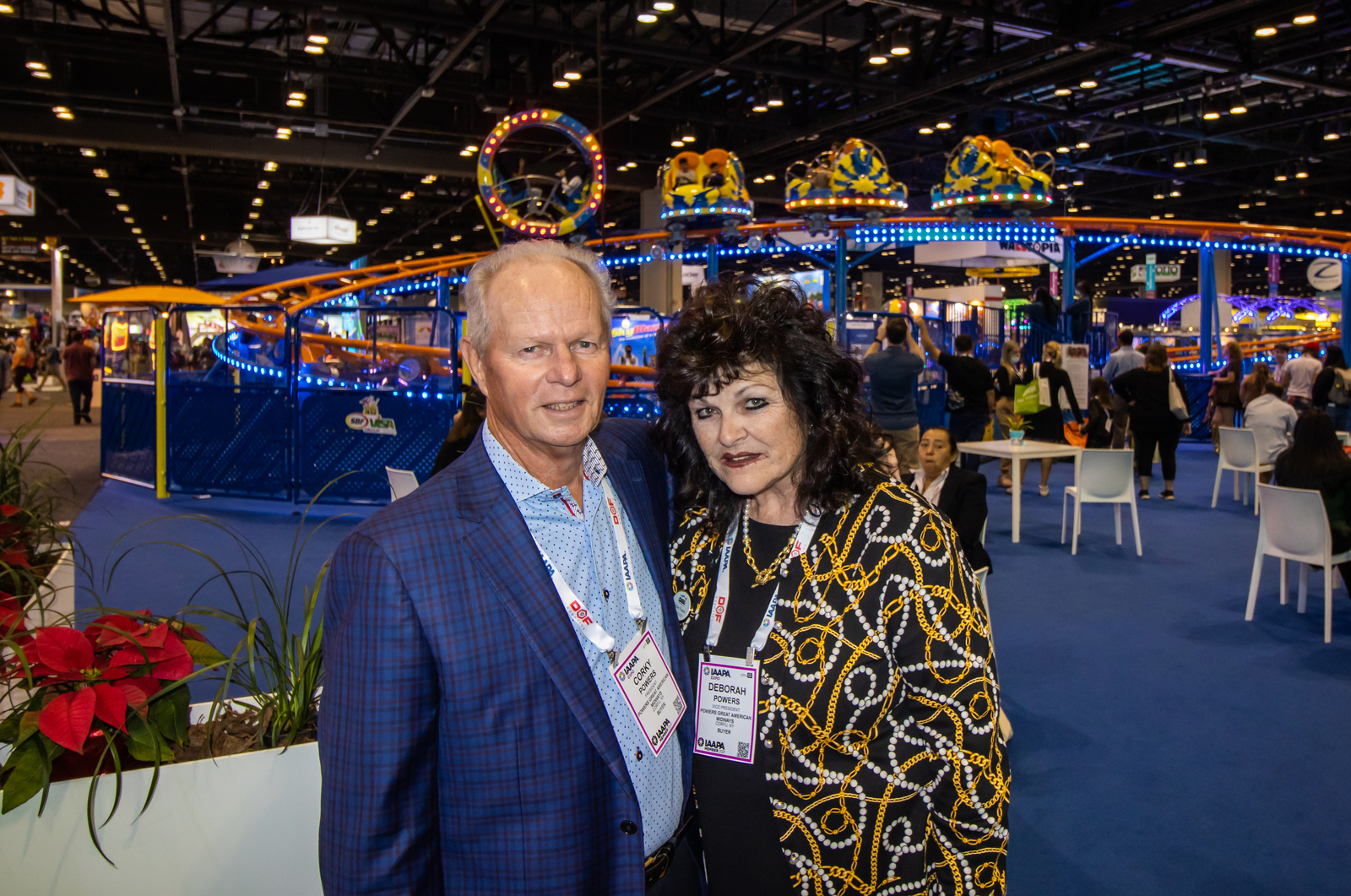 Corky and Debbie Powers were on hand for both IAAPA (pictured above), SLA, and IAFE Trade Shows.