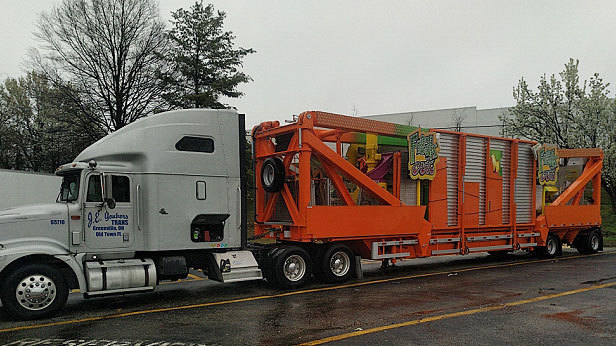 A Brand New KMG Freak Out was delivered to Paul Mauer Shows
Paul Maurer took delivery of the new attraction at the end of March during the COVID-19 pandemic and anticipates putting it to work soon.

In the midst of uncertainty during the COVID-19 pandemic, Len Soled and his team at Rides 4U are happy to provide positive news; things are pretty much business as usual for them and they're still available to help show owners and parks with all of their ride needs. Soled and one other staff member are in the office, keeping a safe distance, and the rest of the team are working remotely from home. “We're still finishing our deliveries for this year,” says Soled. “We're fortunate that our factories are still open and operating even in Italy and KMG in the Netherlands which have been affected badly by the Coronavirus.”

Just last weekend, a brand new 2020 KMG Freak Out was delivered to Paul Maurer Shows by the Rides 4U team. The ride came in through the Baltimore port and was driven cross-country to California by truck.  “We ordered the ride last Fall; I've had my eye on a Freak Out for a few years now and we had such a good 2019 season it seemed like a good time to make the investment,” says Paul Maurer, owner of Paul Maurer Shows. Robby Tucker, a technician with Rides 4U traveled to California to help the Paul Maurer Shows' team set up, operate, and tear down the ride in order to become more familiar with the new piece. “Everything went really well it was a great experience. Robby Tucker was very helpful and gave us all a hands on lesson about the ride,” says Maurer. Once the 2020 season is back on track, Maurer will immediately feature the Freak Out on his midway. “Right now we're all waiting for things to be safe. We have equipment parked at the San Bernardino County Fairgrounds and we just hope everyone stays healthy,” says Maurer.

Additionally, a 70 ft Air Balloon Observation Tower is on its way to New York from Italy to be delivered to Adventureland Amusement Park sometime at the end of this week, says Soled. In other purchase and delivery news, North American Midway Entertainment (NAME) also purchased a rare used Chance double decker carousel in pristine condition; the carousel was formerly set up in a shopping center.

Like most, Soled is choosing to stay positive. “In this industry we all like to be open and making money but for now we have to focus on what we can do.” The spare parts side of the Rides 4 U business is doing well right now. Soled attributes this to show owners who are tackling various refurbishment projects in their winter quarters. “All of the carnival owners I've spoken to lately are focusing on getting things in pristine condition so they're ready to roll out the door as soon as it's time, and thankfully everyone I've spoken to is staying healthy,” says Soled.

When asked about his thoughts on he future of the 2020 season, Soled again has an optimistic answer; “the good thing about the carnival industry is that the big fairs are later in the season.” As someone who has both operated and distributed equipment, Soled knows the importance of hanging on to those late Summer and early Fall events both for the community and the shows. Whether it be due to inclement weather or other factors, many shows have a slower start in the Spring and get into the thick of their season once school lets out; “I'm hoping everyone is ready and able to operate when the big money is out there to be made,” says Soled.

Rides 4 U is currently handling a liquidation involving 12 pieces of equipment for a park in Ocean City; Soled began calling around to determine interest and was happy that quite a few show owners were to take a look at the inventory. After many years in the industry, Soled has found that interest in buying tends to happen after a rainy weekend, a blank spot, and other challenging circumstances. “I think it's motivating; it keeps you thinking about the future. People are looking for good deals and looking to stay encouraged,” says Soled.

Especially in times like these, the Rides 4 U team is thankful for their working relationships with both parks and carnivals which feel more like friendships, according to Soled. “We're here as friends to people in the industry too, I've been calling and talking to individual parks and carnivals to check in and see how everyone is doing,” he says. Soled also says that he knows an operator in China who recalled massive crowds at events after the SARS outbreak; the community was ready to get out and have some fun once it was safe to do so. Soled advises show and park owners to focus on projects they can accomplish for the time being, to not watch the news too much, and to be ready to come back in a big way, bringing fun to communities who will desperately need it on the other side of this pandemic.

Paul Maurer took delivery of the new attraction at the end of March during the COVID-19 pandemic and anticipates putting it to work soon.