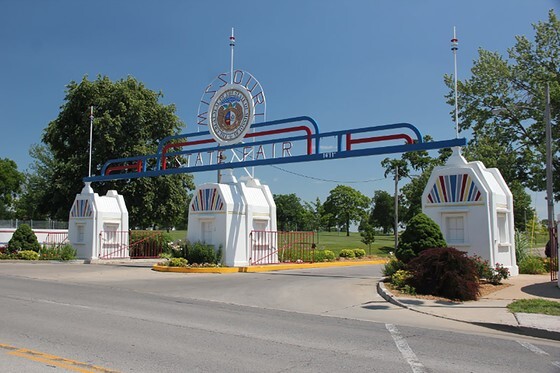 Missouri State Fair Director Mark Wolfe announced today that a restoration project on the Historic Main Gate of the State Fairgrounds in Sedalia is currently underway. The restoration of the gate, which was originally built in 1939, is being funded by the Missouri Bicentennial Commission.

“The Historic Main Gate on 16th Street is an icon for the fairgrounds,” Wolfe said. “It is the first impression many fairgoers have when they enter the grounds. We were excited when the Bicentennial Commission told us they wanted to fund the renovation of the gate as a lasting project on the fairgrounds to commemorate the 200th year of our state.”

The restoration project will include water blasting, priming and resurfacing to form previously defined contours. The upper steel structure and the three booths will be repainted. New vinyl signage will be added as well as new light fixtures on the existing light poles.

“Missouri commemorated the 100th year of statehood at the 1921 Missouri Centennial Exposition and State Fair,” said Beth Pike, Missouri Bicentennial Coordinator with the State Historical Society of Missouri. “One hundred years later, Missouri has reached another milestone of 200 years of statehood. The Missouri Bicentennial Commission recognizes the ties that bind – and welcome - all Missourians to the Missouri State Fair each year. Missouri 2021 honors the legacy of the State Fair with the restoration of the Historic Main Gate, which will continue to welcome fairgoers far into the future.”

The restoration project is being completed by W & M Welding, Inc. of Sedalia, and is set with an early spring 2022 completion date, weather permitting. Those interested in the progress of the restoration can follow the Fair’s Facebook page for updates and photographs.