Remembering Tom Powell: The Man who Chronicled the Carnival Industry 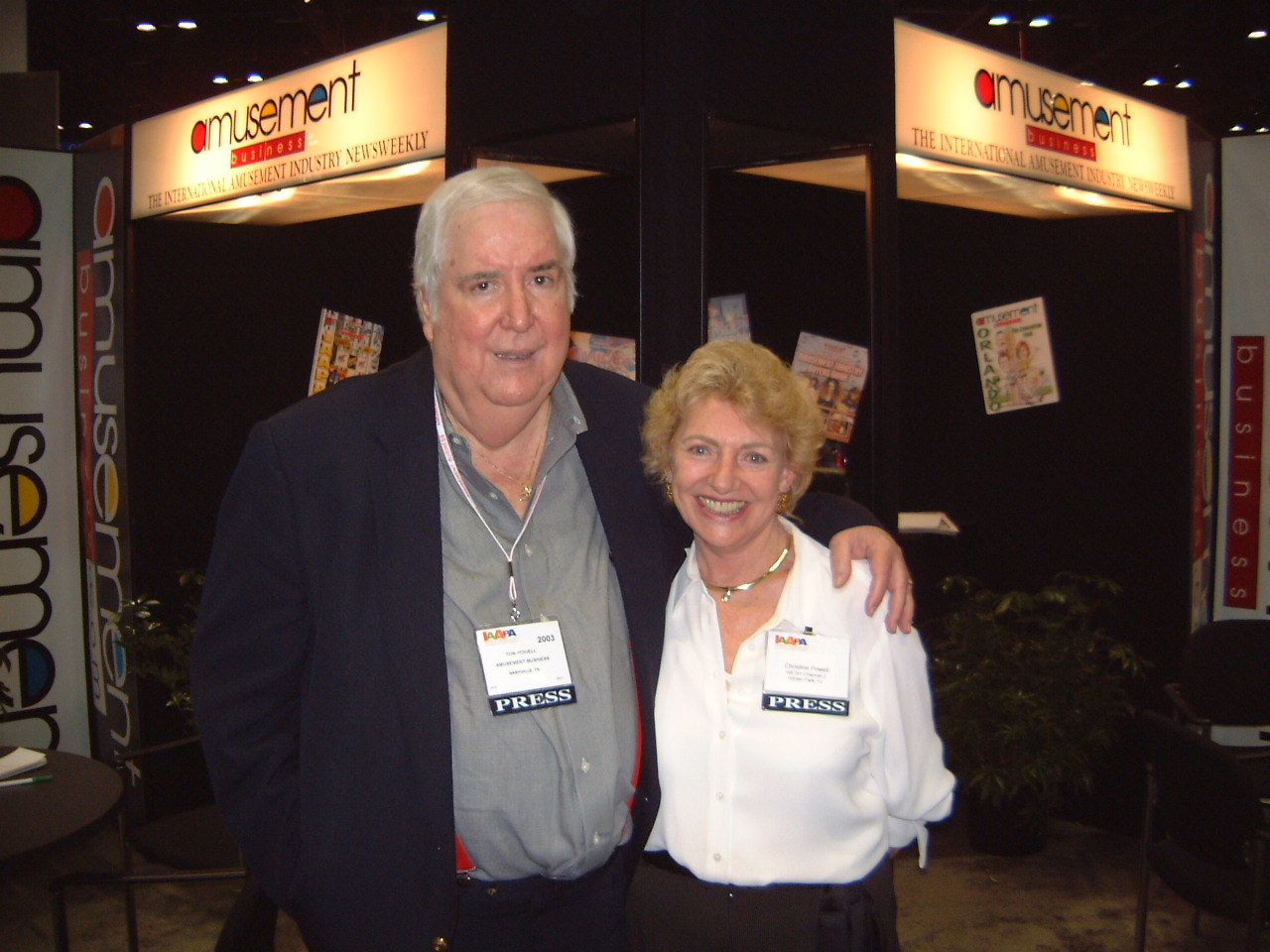 Tom Powell, one of the most well-known journalists covering the carnival, fair, amusement park and outdoor event industry, passed away a year ago in January.  Powell's career spanned nearly seven decades, and an array of journalism  gigs, mainly covering outdoor entertainment and sporting events and concluded with a focus on carnival companies, fairs and amusement parks.

The final act of the play is always the one theatergoers remember and from 2007-2019 he endeared himself to fair and carnival professionals young and old with his monthly column On The Earie for the Outdoor Amusement Business Association (OABA).  The association also named him News Ambassador, and he was a well-known fixture at industry trade shows and conventions, where his gift-for-gab gregariousness, industry knowledge, colorful personality, and extensive network of friends and contacts endeared him to generations of fair managers and carnival company professionals.

During the 2020 OABA Annual Membership meeting in Tampa this past February, Powell was honored.  “His name was mentioned at the memorial banquet where we name everyone who passed,” said Johnson.  “We also had a room with a bottle of scotch, which was his favorite drink, and many of his friends came by to drink a toast to Tom and reminisce.”

Perhaps nothing could be more fitting than an informal tribute, where friends could imbibe and tell stories.  “Tom was always sitting at the Gibtown Bar and we missed him. He knew everybody, and he had a unique skill for remembering people's names.”

Powell, a graduate of the University of Scranton, began his career as a sportswriter for the Tennessean from 1958 to 1972,  which led to part time gig as the race announcer at the Nashville Speedway in the 1960s and 1970s.  The carnival, fair, amusement park, and outdoor event industries first encountered Powell, as editor of Amusement Business (AB),  a position he held from 1972 to 2006.

During his long career, Powell was the recipient of many awards and honors including a board of director's special award from the International Association of Amusement Parks and Attractions (IAAPA), and being inducted into the International Independent Showmen's Association (IISA) Hall of Fame.

By most accounts, Powell was let go from AB as a cost-cutting measure, although the move was not sufficient to save the publication, which, like so many print publications went out of business in the first two decades of the 21st century. 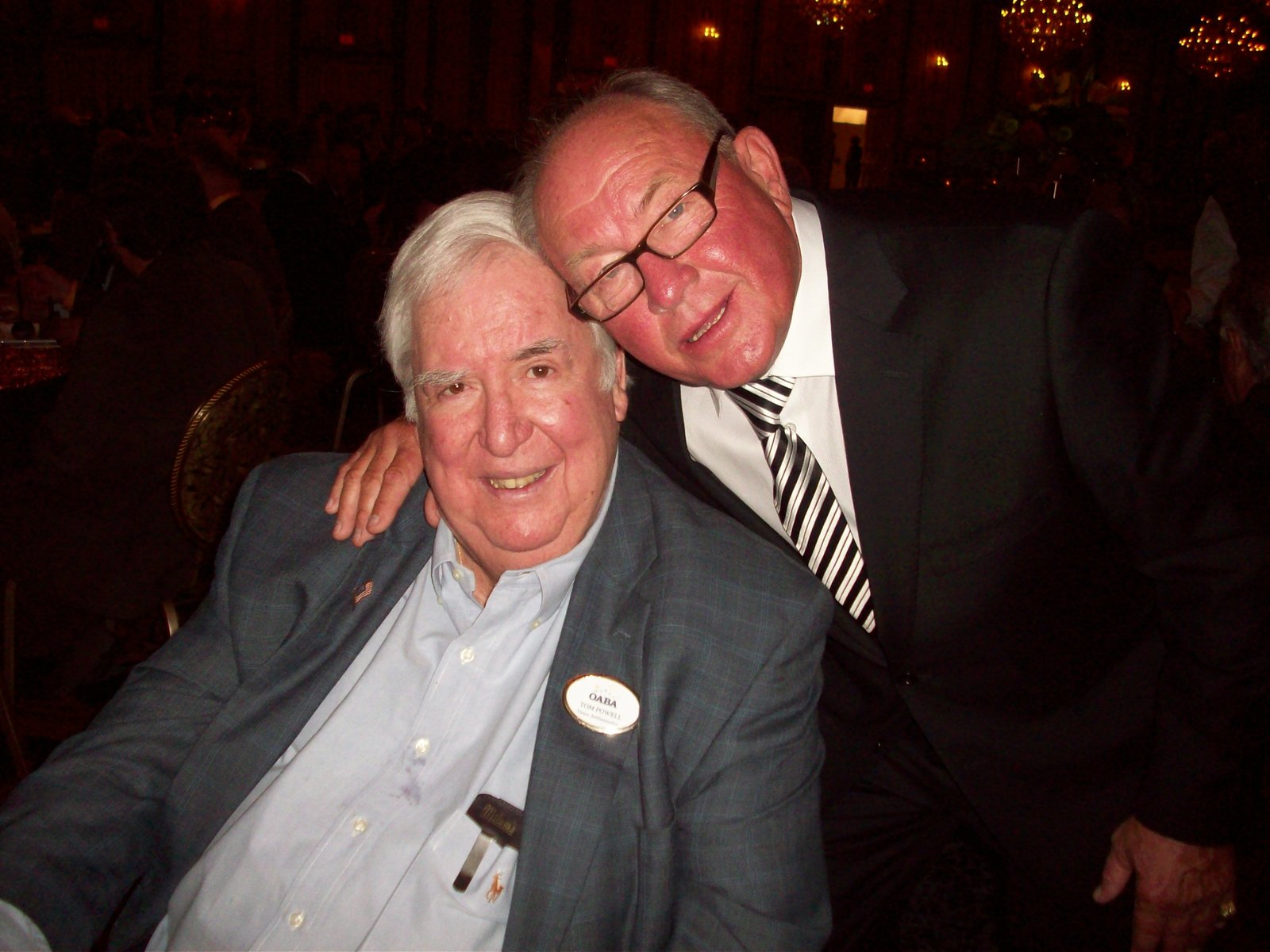 Wayne Kunz visits with Tom Powell during a OABA banquet

Johnson was instrumental in formalizing the relationship with the OABA, which began with articles in OABA publications, ShowTime Magazine and Midway Marquee, and set the groundwork for acquiring the veteran journalist to write an ongoing, monthly column. “When he left AB, he left a huge void in covering the industry. We put him on a retainer, and gave him carte blanche. He never missed a deadline.”

And, perhaps a compliment every journalist likes to hear: ”We never had to do much editing, said Johnson, “Tom had real knack for telling stories, and listening to people. He knew these fair managers, always calling them for the results of a fair, all the facts.  He saw how the carnivals were very family oriented businesses. People liked talking to him.  He was what you would call a ‘jolly good fellow.”

"Tom had relationships with so many people in our industry,” said Greg Chiecko, President and CEO, OABA. “One could always count on Tom to put the word out on anything that was important to them." 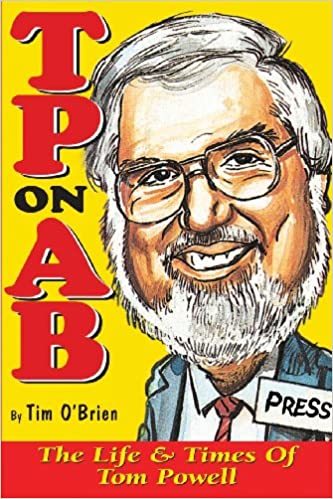 Powell is also one of the few trade magazine journalists who was actually the subject of a book, TP on AB: The Life and Times pf Tom Powell, published in 2003 and still available on Amazon. The Amazon blurb reads: “This is the illustrious story of Tom Powell, the colorful, larger-than-life journalist who has spent more than 50 years traveling the world rubbing elbows with everyone from the President of the United States to Baseball Hall of Fame members and side show carnival freaks.... TP is the best-known, most-loved journalist to ever chronicle the outdoor amusement industry.”
“He loved fairs and he loved amusement parks,” said Tim O'Brien, author of TP on AB. “The whole family thing, appealed to him and when he started, there were no corporate carnival companies. He loved the people because they were entrepreneurial, had long histories and a great work ethic which he admired. He liked people, and people liked him because he told it like it was and he didn't cherry coat it.”

O'Brien is a veteran photo journalist with more than 40 years experience covering the outdoor amusement industry and founder of Casa Flamingo  Literary Arts, a boutique book publishing company.  Powell hired O'Brien in 1985 as managing editor of AB, where they worked together for 18 years.  “Tom was very knowledgeable specifically in the carnival industry.  When he was younger he went out on the routes, to learn the industry, and the families always stayed loyal to him.  “He was very much an old time journalist, working on a deadline. He had that personal touch and  he talked to everybody.  He had that background, and he was a wonderful name dropper.”

O'Brien added, “This whole pandemic has shown how important people are in that industry.  He was the last of the greats”

The rigors of journalistic story telling was ingrained in the man.  One of the final communications with the OABA occurred in January, when Powell's wife, Christine, phoned Sue Gallup, Administrator & Member Services Manager for the OABA letting the association know that Powell had suffered a fall and was taken to the hospital.  According to Gallup, she then received an email with the final On The Earie column.

“His daughter Allie, emailed me this: ‘As he's lying in the hospital, all he can think about is getting his column to you', remembered Gallup.

The concluding line his column seems to best sum up the philosophy of a dedicated storyteller and raconteur.  “I'll drink to that, and a good life. I would not change a thing, well maybe a few”.

TB on AB by Tim O'Brien