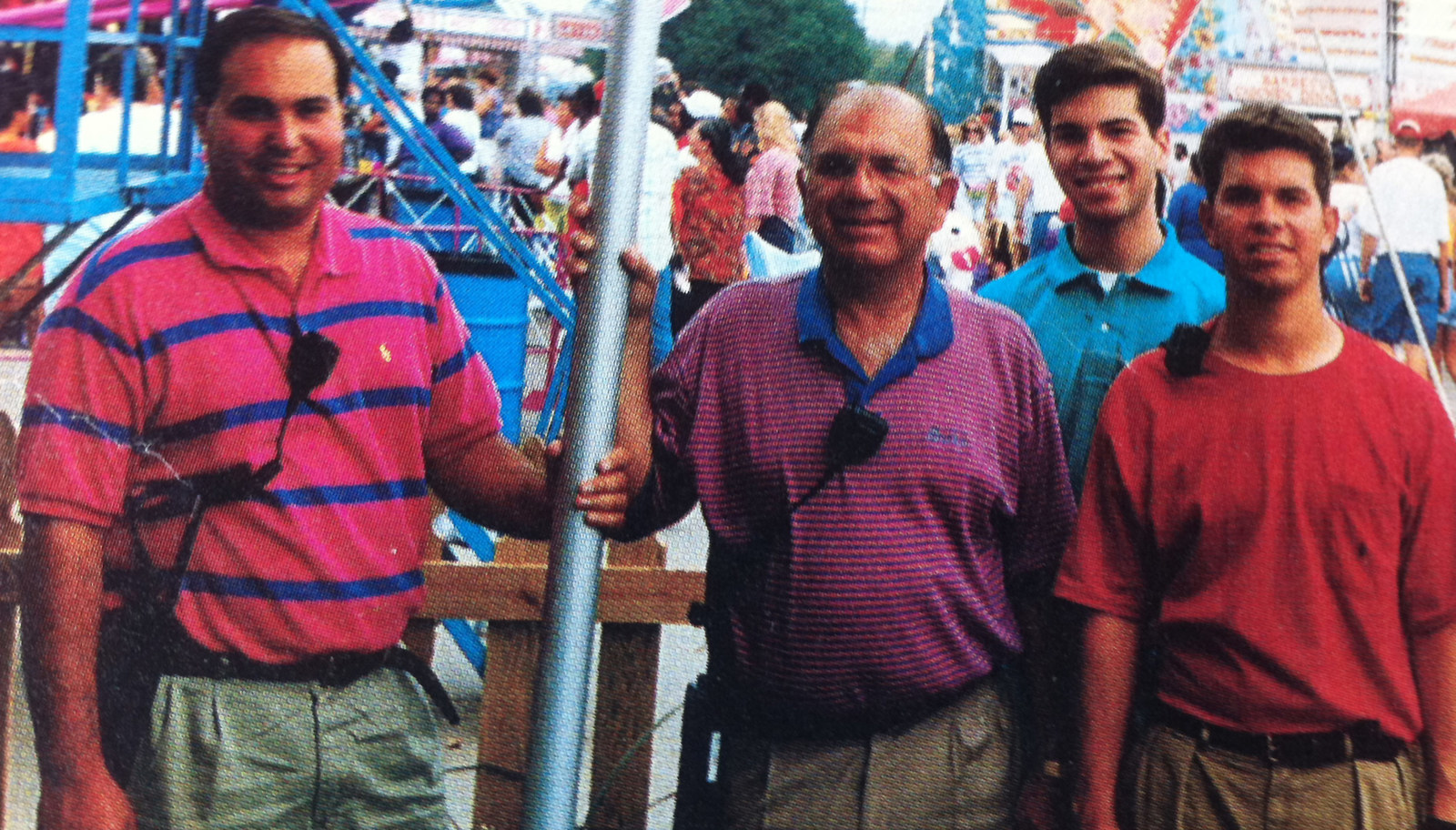 A Blast From The Past at the Ohio State Fair
Ron Weber (left) served as the marketing director for AOA standing next to Dominic Sr., Dario, and Marco Vivona.

I was saddened to hear of the passing of Dominic Vivona on August 4th, after a brief battle with Covid-19.  He was 88.  Dominic was one of the famous five Vivona Brothers who grew Amusements of America into a carnival powerhouse after they purchased the Ferris Wheel from the 1939 World’s Fair.

Dominic was actually the first person I ever met in the carnival business, and our meeting in Hampton, Virginia at the Coliseum in 1991 introduced me to the wonderful world of fairs and carnivals and changed my life and career path forever.  Dominic worked with me to raise tens of thousands of dollars for the Leukemia Society and I delivered on several key locations for events.  As I worked with him and his brother John over that year, we struck up a friendship, and soon he would offer me a position as the Marketing Director for Amusements of America.  In that position, I learned so much about the amazing Vivona family and their incredible business.

Each of the Vivona Brothers has a distinct personality.  Dominic initially worked in the shadows of his older brothers Morris and John but with a gift for business and numbers and an easy, likable way about him, he was able to take a leading role by building coalitions among the brothers and kept the peace in a large, opinionated Sicilian family; something that is a remarkable feat in and of itself!

Like a car with an array of parts that you can’t believe will even start, let alone get you to where you are going, the Vivona Brothers somehow managed to not only succeed, but excel, despite the loving rivalry, fighting, yelling and sometimes even screaming that would mark their interactions.  The fighting and disagreements, no matter how acrimonious in the moment, would turn on a dime as they ended business discussions and came together harmoniously as family.

One of my earliest memories of the brothers together was a “Brothers Meeting” in Henderson, NC to go over logistics for the coming year.  I was asked to give a presentation on the route during the meeting.  The Vivonas flew in on a small plane and we assembled together to start the meeting.  John turned to me and asked “Alright when are we opening?”.  “April 5th in Portsmouth, VA, at Tower Mall”, I replied.  And then it began — “Why are you opening so early it’s cold in April” said Morris.  “I got money there in April last year” replied Dominic.  “Why don’t we play a spot on the way up from Florida?”, asked John.  The questions came rapid fire and the volume rose as back and forth they went for what seemed like a couple of hours.  At around noon, Morris looked at his watch and said, “It’s lunch time, I’m hungry” and we piled into a car and together headed for a local restaurant, disagreements completely forgotten.

The afternoon session didn’t move much more efficiently — I don’t think we got even halfway through Unit 1’s route let alone all three of them — but after the chaotic meeting Dominic reached out and worked with me on the routing so the show would have places to go.   Without explicitly saying so, he showed me he was the point man who did a lot of the nuts and bolts work to make the show move forward, but he also was clear that his brothers were equal partners and their input was essential.

When I think of Dominic, I reflect on his kindness and easy smile, his impish chuckle and self deprecating humor, but what stands out most, is his love of family. Dominic’s wife Maddalena and later, Helena, and children Dominic Jr., Pia, Marco and Dario, were obviously the lights of his life.  The carnival business can seem all consuming, and many showmen put all their time into their business, unfortunately, sometimes at the cost of their family relationships .  Dominic devoted time and attention to his wife and children and eventually, his grandchildren, and both Maddalena and Helena were partners who were not afraid to let him know when he was maybe spending a little too much time on business and needed to recalibrate.

Dominic’s family extended beyond his wife and children to his employees on the show and his fair committees.  He was generous with everyone he met and was always willing to listen and help whenever he could. During my first year at the Ohio State Fair, I was away from home for two or three weeks for one of the first times in my life. Dominic knew I was there by myself.  He told me he and his wife had dinner at 7 each night at their trailer and he expected me to come.  It wasn’t a one off invitation, but a welcoming into his larger family.  That gesture and the many that followed throughout the years, were indicative of how Dominic treated his family and those around him.

Dominic wasn’t the brash, flashy showman that his brother John was; he made his own path, in his own way.  Dominic served as Chairman of the OABA in 1994 and helped oversee the selection of Bob Johnson as the new President.  He received awards and honors throughout his career in recognition of his work and achievements in the amusement business.

Dominic was the glue that held Amusements of America together for so many decades when his older brothers allowed Dominic to assist in steering the ship.  He received enormous joy from visiting with his fair committees and seeing the lifelong friends he made over the years and the lives his work touched.  Most of all however, Dominic was a loving, doting, caring husband, father, grandfather and friend to all he met.

Thank you Dominic for introducing me to the amusement business and for your guidance, kind words and encouragement all these years.

A Blast From The Past at the Ohio State Fair

Ron Weber (left) served as the marketing director for AOA standing next to Dominic Sr., Dario, and Marco Vivona.