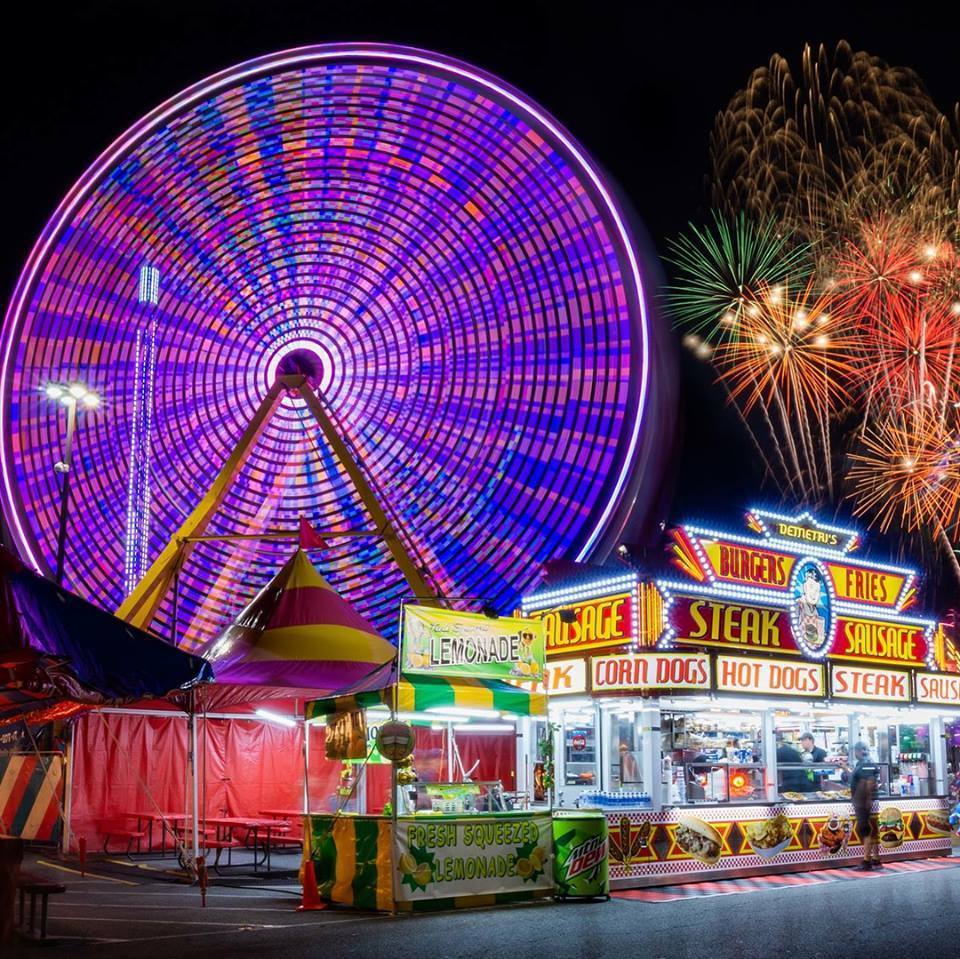 What did the Delaware State Fair get for its 100th birthday? Probably what every fair wishes for – record attendance at its annual party,

With headline entertainment that boasted sold-out shows by Reba McEntire and the hot selling country duo Dan + Shay, a 54-ride midway by Wade Shows, and a heatwave that faded into ideal fair weather, the centennial of the Delaware State Fair turned out to be an exceptional anniversary.

The weekday record breaking day was on a Wednesday, the day after the an excruciating, triple digit  heat wave finally broke in favor of milder daytime temperatures, lower humidity and cool crisp nights.

“The first five days of Fair were brutal in terms of hot weather that directly impacted patrons, exhibitors and animals when heat indices averaged 108º,”  said Bill DiMondi, General Manager, Delaware State Fair. “Tuesday was a day of weather transition when the area was doused with a full day of rain. Finally, when great weather arrived last Wednesday and hung around through closing on Saturday night it seemed like the entire Del-Mar-Va peninsula decided it was time to visit the fair and boy were we ready for every one of those visitors.”

A great concert lineup – Reba McEnitre had two sold out shows – boosted the attendance and offset many of the attendance dips due to the early onslaught of heat. Other concerts included Sugarland, Gladys Knight, America's Got Talent winner Darci Lynne, Brantley Gilbert, Brothers Osborne, Christian artists Bethel Music – as well as the fan favorite Demo Derby. An estimated approximately 50,000 fans attended the M&T Bank Grandstand performances this year, with an increase in VIP concert package sales.

The concert business remains in the throes of a sellers market. In recent years, the fair's music selection have been impacted by heightened competition from festivals and other venues as well as rising production costs and artist fees. For the 100th Anniversary, the fair increased its music entertainment budget by 21 percent. “It is always a challenge, and this year was still a seller's market,” said Danny Aguilar, Assistant General Manager. “It's mainly what the artists we wanted are changing, but I like to believe the artists are on the East Coast and we are an established venue in the Del-Mar-Va area. The artists come for our stage, our catering, the back-of-the-house and the audiences here too.”

While few expect entertainment market conditions to improve for fairs next year, Aguilar said the budget increase will probably not be repeated. But headline entertainment as a separate ticket is a model the Delaware State Fair remains committed to. “We are an entertainment destination said Aguilar. “Our brand is the combination of food, rides and the entertainment, it's that combination our core audience comes here for. Getting the right entertainment will always be a challenge.”

The fair decided not to increase its marketing budget – about $135,000 – but did change its expenditure strategy. Nearly half – 47 percent – went to digital and social media, taking money out of radio, print and older media. “Most of the digital advertising were with newspapers and other recognized media,” he said. “So we went with some companies who have been partners, but just on their digital platforms.”

Completely eliminated from the marketing budget were billboards, replaced by an investment in a new electronic billboard at the gates of the fairgrounds, in view of two highways and by more than 26,000 automobiles per day. The advantage of its own billboard was  that “we were able to control our content,” he explained. We were able to put more messages. We used to just focus on our concerts. We used to have to rotate only five messages and were competing with other businesses. But now we can present our sponsors. We had more messages and more types of messaging. We could focus on all our entertainment, like the Clydesdales and the circus on site.”
More money was also shifted towards social media, with an emphasis, along with ticket giveaways contests and other promotions, on engaging social media  followers. “We saw our Instagram and Facebook followers grow 5-12 percent. We are reaching a larger audience, and with Instagram you reach the younger generation while Facebook's fastest growing demographic are the baby boomers. We used a lot more videos, and we are using Facebook especially to have more of a conversation with our patrons.”

For its centennial celebration, the Delaware State Fair created a video archive, which began last year where the staff interviewed more than 2,000 patrons about their memories at the fair. An oral history project, the videos were used for a DVD as well as on the website and other forums throughout the year.

The 100th birthday was the centerpiece of the marketing effort. The tagline for 2019 was “100 Years of Family Fun,” and featured in the fair's advertising, social media promotions and other posts.  In honor of the event, the  streamers and bunting made with the Delaware flag colors of blue & gold were placed throughout the fair.

“We used their logo and some photo cut outs for pictures on the midway,” said Frank Zaitshik,  president, Wade Shows. “Their centennial was a milestone, and created a buzz between the fairgoers and their fair. There's a special passion for the fair and its history in Delaware.”

Zaitshik also credited much of the buzz to the marketing efforts of the fair team. “It's a very progressive fair with their attention to marketing and social media and finding alternative ways to increase attendance. They've embraced social media and the results are increased enthusiasm. They really drove attention to the fair. They have a new motivation for advanced sales, and it's my good fortune to work with them.  Like I always say, ‘you bring them in and we'll ride them,” and together we created a fond, memorable experience.”

The Delaware State Fair has been on a steady upwards trend and the 2019 midway revenue was a record, although Zaitshik would not elaborate on how much higher. “We had a very good year and did very well. There was a streak of hot weather, then a storm, and our figures were going down, but by the first Tuesday that ended and beginning Wednesday we saw increases.  We finished with our biggest fair there. We set records.”

Records were also set in food & beverage sales, according to Aguilar. The Delaware State Fair offered 75 food vendors. One notable newcomer was a Barbecue provider “who did great sales, his brisket and other food offerings were very popular, they were quality products and had affordable pricing,” he said.

Standard fair cuisine like donut burgers, corn dogs and deep-friend tacos were much in abundance, but Aguilar also noticed healthier offerings, such as vegan, food allergy free and gluten free options. “Folks are becoming more educated about health and nutrition and making healthier personal lifestyle choices. That was definitely a trend I saw this year.”

But how can you have a birthday without cake – but how to serve cake to a record turnout?

Through a sponsor deal with Tastykake, a Philadelphia-based snack company, every night of the event free Butterscotch Krimpets – the company's signature cupcakes — were distributed. “The daily distribution of free Tastykake Butterscotch Krimpets  served as our version of birthday cupcakes,” said Ron Draper, President, Delaware State Fair Board of Directors. “Celebrating the Fair's 100th anniversary was a wonderful occasion that was the result of countless hours of creative planning by the staff and the Board of Directors. This was not your usual run-of-the-mill Fair. This was a once-in-a-century celebration and everyone caught the centennial spirit.”