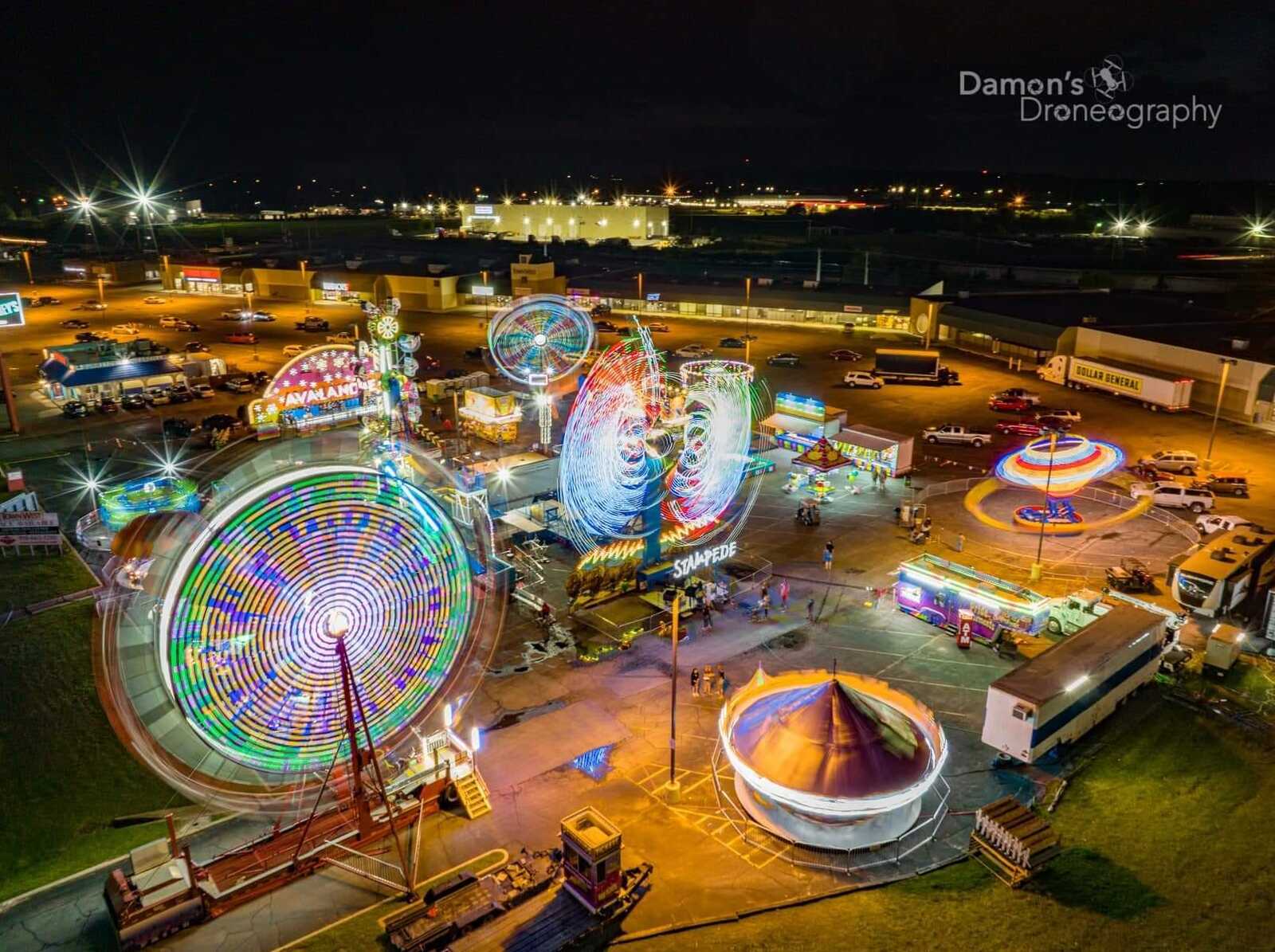 When James and Sondra Burlingame purchased Pride Amusements from James' mother Betty Burlingame in 2018, it was more of a progression of operations rather than a change in ownership.  James has been working on his father's show for years and was familiar with all the events and the operation of the carnival.  “It was a smooth transition”, said Burlingame, “nothing changed”.

Familiar with the show's route, staff and committees, the show continued to work events primarily in Arkansas and Oklahoma, with some short stops in Kansas and Missouri. 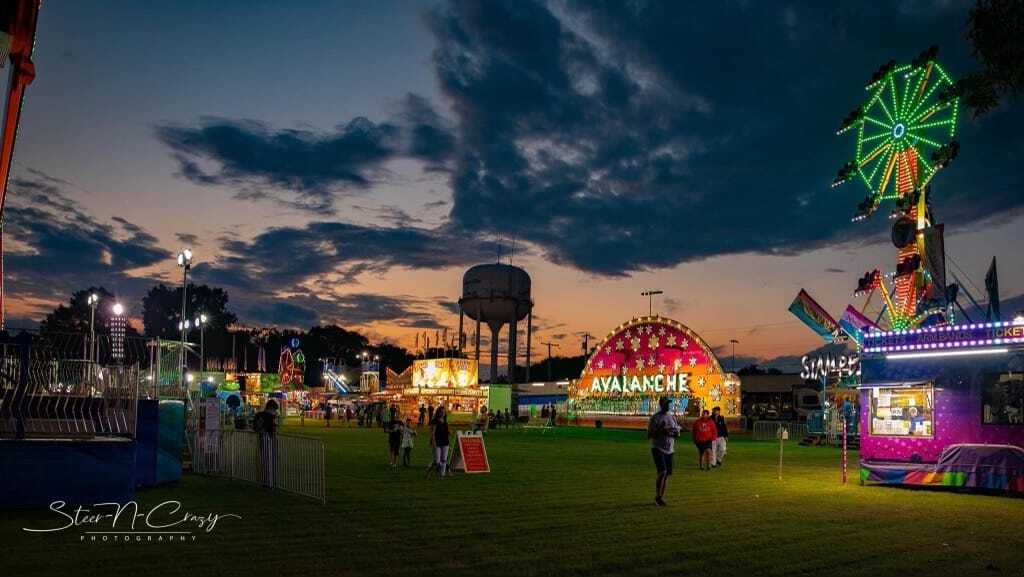 The purchase of the show included 22 rides, 2 properties; one in Joplin, Mo and one in TX, and 2 food stands, a Popcorn and a Funnel Cake/Corn Dog.

The show's lineup includes a Wisdom Stampede, actually the second one built, which Burlingame went completely through and keeps running throughout the route.  The unique piece is eye catching and certainly a signature look for the show.  Other attractions include a Gravitron, Avalanche, ARM Screamer with open tubs,  Owen Haunted House, Zero Gravity, Raiders, Merry Go Round, Seller Spin Ride and 4 Hamptons mounted on one trailer.

The show would typically carry about 18 pieces throughout the year but after Covid, they dropped to closer to 16 rides and found grosses were not affected.  “We didn't need the 18 to get the money”, said Burlingame.  He has rotated a ride or two in and out of the lineup over the years such as his Zipper which is out this year, but was not on the road last year.  The addition gives the show a fresh look for its customers and something new to promote to committees during the season.

Burlingame is a big believer in offering pay one price wristbands every day of each event, something his father started doing 30 years or so ago.  Ed, along with some other show owners such as Danny Ottoway, saw that grosses and per capita spending rose under a POP system and adopted it full time with great success.  Burlingame said he is always thinking about pricing and what is the right balance between cost for the POP that is too much or not enough, but he believes the show has a pretty good handle on what the demand is in the communities he serves. 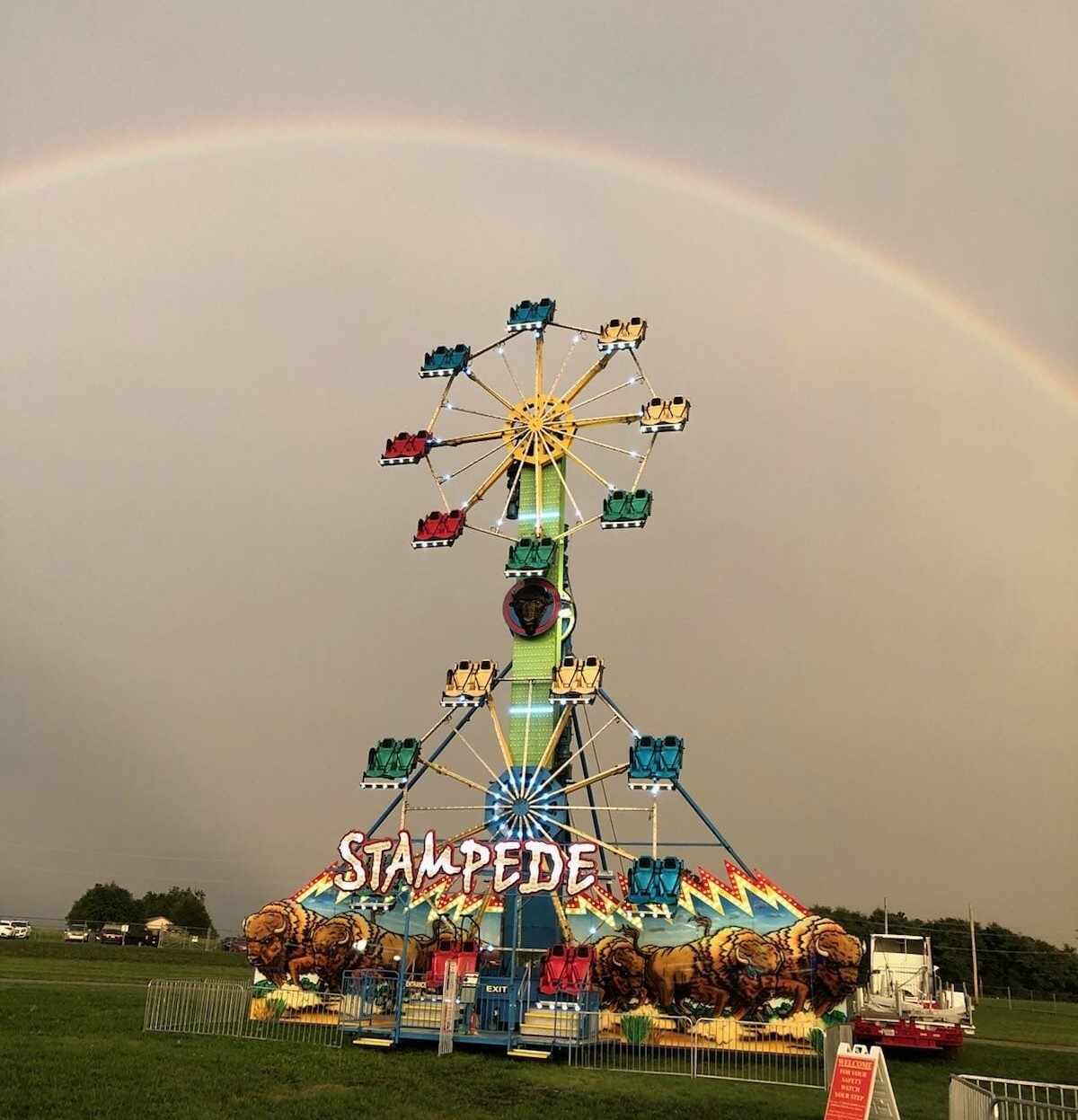 The Pride Amusements route has stayed largely stable over the years, starting usually in April and running through October.  The show begins with some established still dates and malls before transitioning to more festivals in May and early summer before hitting some county fairs and returning home.  “We have played many of the same dates for 20 years”, he said, adding events for routing purposes or to fill in openings that have arisen.

The show travels to Kansas for 3 weeks and then spends 2 weeks in Missouri, otherwise working in Arkansas and Oklahoma.  His typical jump is 100 -150 miles with some longer stretches in between to reposition.  The show moves about 30 - 35 loads each week.  This is a better situation for Burlingame than in the past when he used to play in the State of Texas with much longer jumps.  Keeping things compact on the route reduces costs as well as headaches.

With the rise in fuel prices, the relatively short jumps have been a good buffer against skyrocketing spending.  “I've noticed on road diesel is dropping a little”, said Burlingame.  For off-load he has been paying close to $6/gallon but paid as much as $7 a gallon in Tulsa.  He did recently pay under $5, which he is hopeful will be a trend.

The show is an “evening show” he said, so the generators aren't running all day long, keeping usage down and Burlingame has kept an eye out for idling trucks and other sensible measures to keep costs down during the fuel crisis.

The other challenge facing most traveling carnivals, labor, has also fortunately not been an issue for Pride Amusements in 2022.  “We got lucky with our visas”, said Burlingame. In addition, they received 8 workers from the “Northern Triangle”.  Those workers'  grasp of English is much better than the Mexican workers he has received, and he is able to use them in different roles such as ticket selling and guest services.  While they don't seem to be as manual labor oriented as his other visa workers, he is happy to have some to help with the areas of the show that require a stronger command of English.

With the addition of the visa workers, this is the largest crew the show has had in quite a while.

So what is the biggest challenge facing Pride Amusements this year?  So far, it has been the heat.  Scorching temperatures have kept people away from his events so far this summer, depressing grosses to some extent.

The show did not operate at all in 2020, taking the Covid year off, but Burlingame was able to do a little fishing.  The team worked on some small projects in the yard, conserving cash and waiting for next steps.  The Midwest opened right up in 2021 and so did the show, playing a full route of events.  “We started out big and stayed big”, Burlingame enthused.

For 2022, the events have continued to hold up.  The season started out strong, but lately has been impacted by the high temperatures and possibly rising fuel prices and inflation, although the impact of those factors is still too early to fully assess. 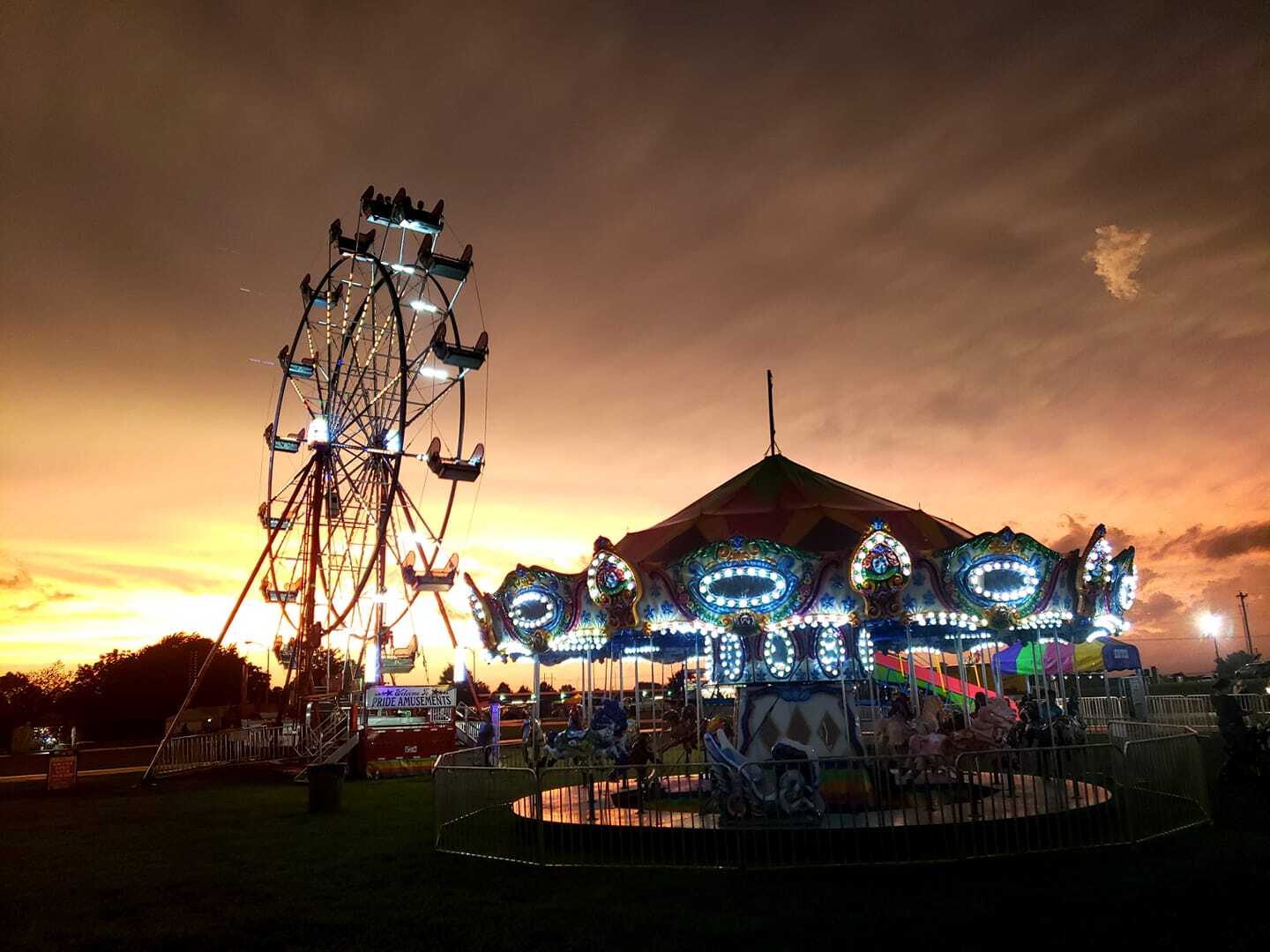 Pride Amusements is adding one big new stop to its route this year, the Ohio State Fair, where he is sending two rides to help his good friend Tom Talley of Talley Amusements.  Talley will be making the trek to Ohio after playing the San Diego County Fair in Del Mar, a big jump for the show.  During the winter, Talley spoke with Burlingame about bringing in a couple of rides to assist and Burlingame agreed to bring his Owens Haunted House and a Wisdom Squadron.  Burlingame will head to Columbus to set up the pieces before returning to his wife Sondra on the show. 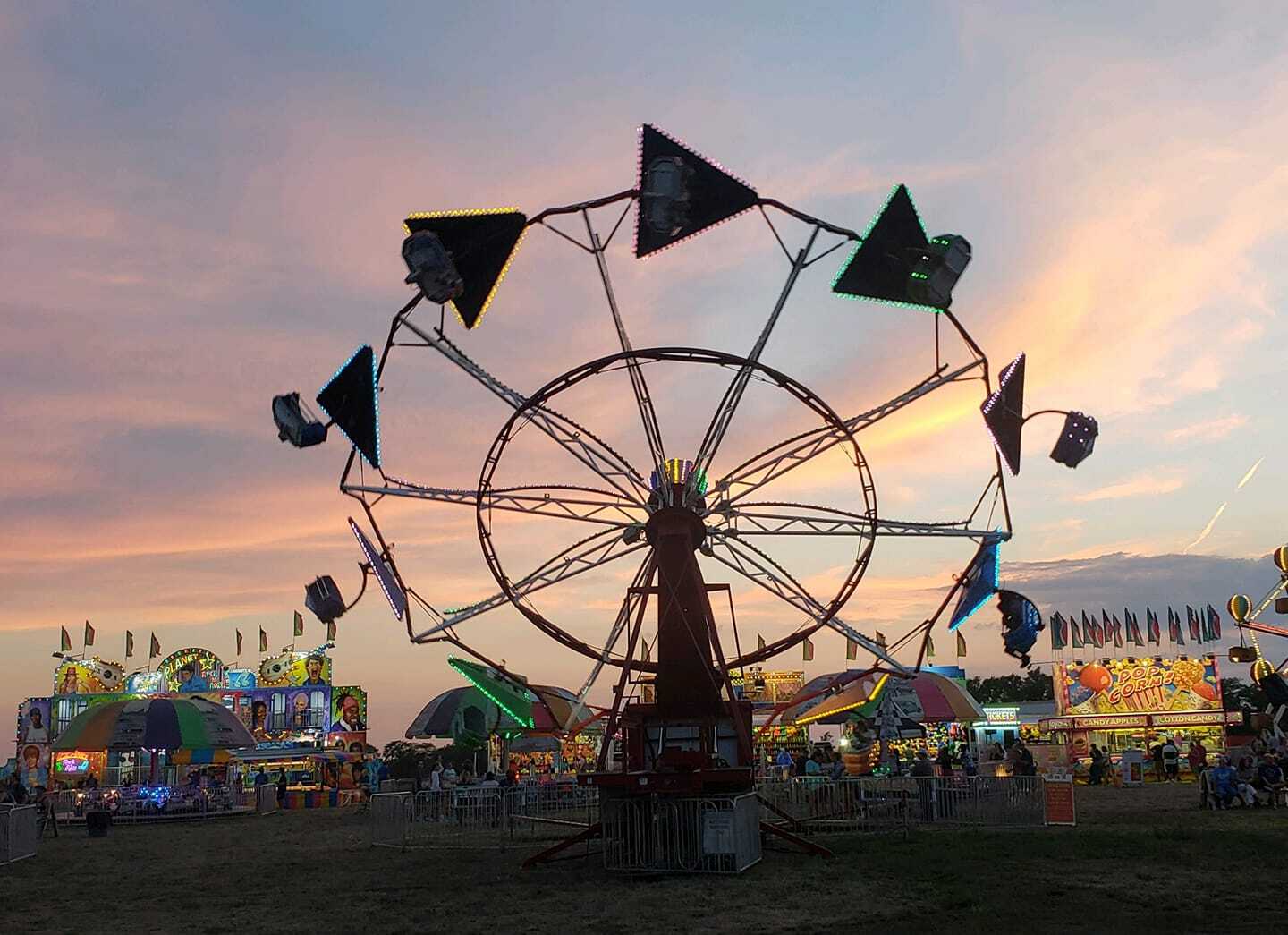 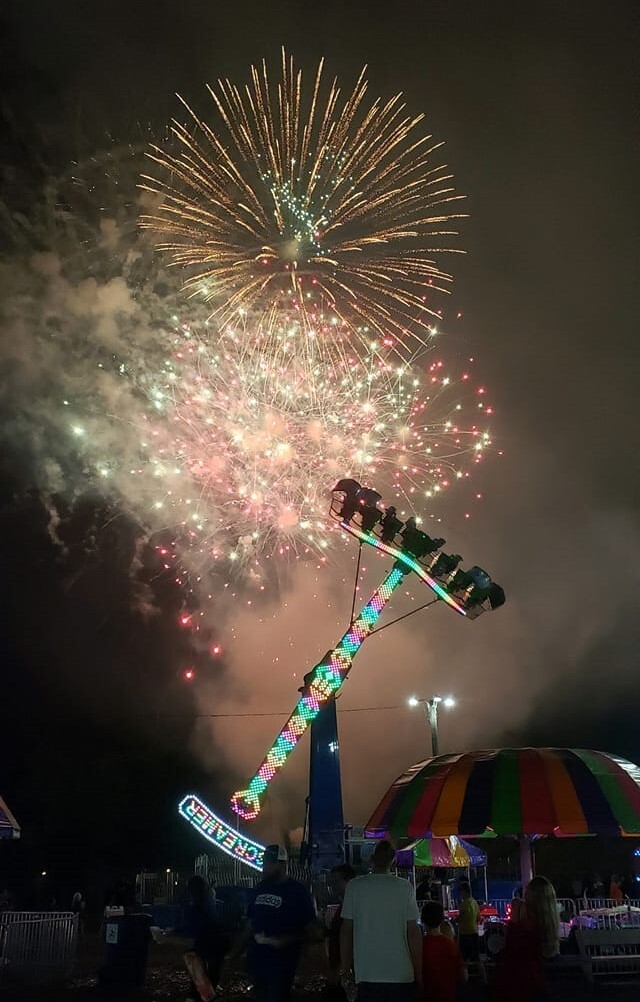