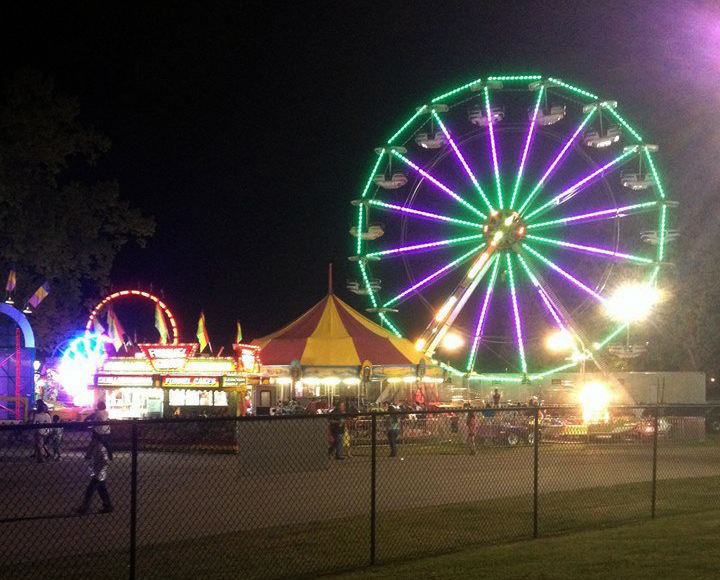 PBJ Happee Day Shows hits the Road
PBJ Shows opened its 2020 season at the Jefferson City Jaycees Fair in Jefferson City, Missouri. The show put in place rigorous safety measures to insure the safety of guests during the COVID-19 pandemic.

Pam Casper, owner of PBJ Happee Day Shows, just finished up a successful run at the 2020 Jefferson City Jaycees Fair in Missouri. Used to being on the road mid-March through October, Casper and her family are adjusting to a very different 2020 season; one which requires creativity and resilience from showmen to keep their family businesses alive. “I'm thankful for Missouri and thankful the governor kept it open as long as he could; it helped me realize we can operate safely,” says Casper.

According to Casper, the fair was a big success, there were a couple of nights of rain which curbed attendance but, overall, the event was on track with years prior. “It's been great being here; we couldn't ask for a nicer committee. We're going on 4 weeks at the fairgrounds, ever since the 4th of July Salute to America Celebration,” says Casper. Unlike most fairs across the country, the Jefferson City Jaycees Fair ran with a full schedule of entertainment including concerts, tractor pulls, a demolition derby, and 4H shows. “The fair was celebrating 70 years and they had the mentality that if you're willing to wear a mask and socially distance, you can come out and have something normal or as normal as possible during this pandemic,” says Casper.

PBJ Happee Day Shows certainly did their part to ensure customers felt safe at the 70th edition of the fair. All employees wore face masks and shields and were temperature checked before beginning their shifts. Additionally, Casper invested in hand sanitizing and ride sanitizing devices from Battech, Showmen Supply, and Galaxy. The midway was filled out with lots of signage reminding fairgoers to stay 6ft apart and sanitize often; “we had good leads from OABA and other sources when it came to regulations and what to have out there for customers to read,” says Casper. Despite the many precautions in place, Casper was still nervous about getting out on the road. “We really weren't sure what we were getting into and what the public response would be,” she says.

Prior to traveling to Jefferson City for the 4th of July celebration, the PBJ Happee Day Shows food wagons were in West Memphis, Arkansas, near their home base, for 5 weeks. “Things were a little bit different; we put up plexiglass to have between the customer and the employee, we didn't give out refills, and we increased our sanitizing practices,” says Casper. Food sales were successful and customers were grateful for the opportunity to get out of the house and get some tasty food. Plus, Casper was happy to practice new COVID-19 regulations with her food stands which made for a smoother transition at the Jefferson City Jaycees Fair.

PBJ Happee Day Shows was originally Hap-Hap-Happee Day Shows based out of Illinois and was owned by Casper's Mother and Stepfather. Once Casper's Stepfather passed away, his partners in Chicago were concerned that the show could not be properly run by a woman, Casper's mother. After losing most of the show's assets in court, Casper, her mother, and her sister started over with PBJ Happee Day Shows; PBJ stands for Pam, Barb, and Jane. Casper, her mother, and her sister bought used rides wherever they could in order to build the show back up. Casper's grandmother had left her family 40 acres of farmland, which they sold and used the money to buy a generator, Merry Go Round, and Hampton kiddie ride to make their dream come true. They then took the show all the way to Miami and spent the winter there amongst 26 different lots across alligator alley from Ft. Myers to Miami.

In 1982 the show got a big break when they were a part of the movie Porky's 2. The money got them back to southern Mississippi and then back to West Memphis after 2 years. Later, they built a route in Arkansas, Mississippi, and Tennessee. Casper eventually took over the show after her mother died in 1992; she started buying brand new pieces in 1994 and has added new rides to the show every year up until last year. Currently, PBJ Happee Day Shows consists of 25 rides, 4 food stands, and a dozen games. “I really think my folks would be so proud of what the show looks like today,” says Casper. Proud that the show is still run by all family, Casper loves working with her nieces, nephews, kids, and husband every day. 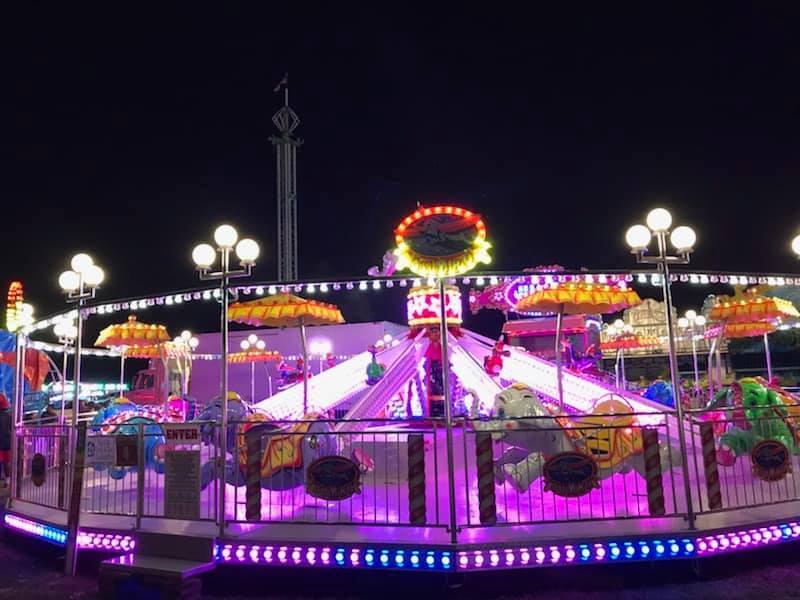 The show added a new Jumbo Flying Elephant from Kolmax-Plus

For Casper, the 2020 season started with a lot of optimism; “we are celebrating our 50th year in business. I had so many plans to hand out t-shirts, duffel bags, and pins as giveaways at all of our locations this year,” she says. Currently, the show is planning to head further South next week and had plans to play the Kentucky State Fair with Kissel Entertainment.  Unfortunately, last week, the Kentucky State Fair announced that it was going to operate a modifed fair without a midway, entertainment, or vendors.  Normally, their season begins on March 15th and ends with Amusements of America at the Coastal Carolina Fair November 1st. “For now, we're hoping to be out through Halloween. Many of our Spring dates have changed to October so they can still have the event,” says Casper.

Like all showmen, Casper is passionate about her business and will do whatever it takes to continue to bring safe fun to families around the country. “I was thinking we would be able to go out June 1st and we were ready to go but then events continued to cancel. We were shocked to get a call to play in Jefferson City for July 4th and I questioned myself every step of the way whether or not it was the right thing to do but now I don't doubt that it was the right choice to get out on the road,” says Casper. After the 4th of July, PBJ Happee Day Shows was able to play the Osage County Fair in Linn, MO. Casper is happy to say that during the 4 weeks of the fair, no cases of COVID-19  were reported in connection with the fair, proving that events can be run with proper safety protocols. 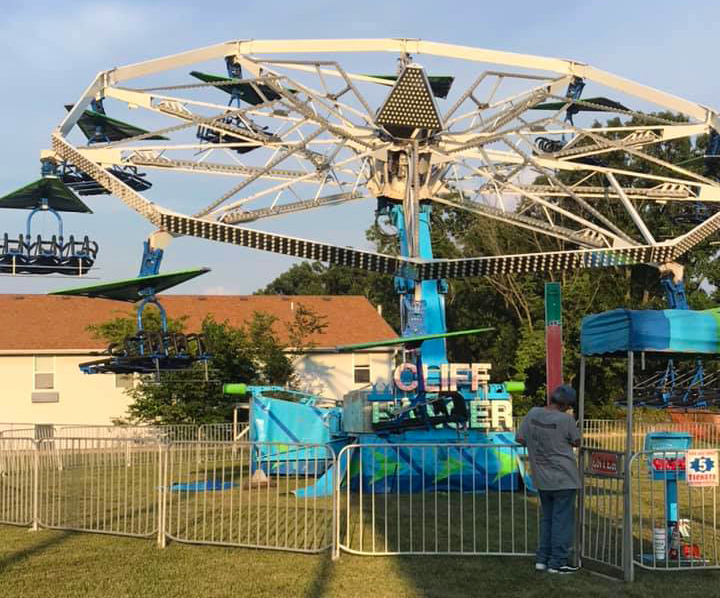 The show played the Osage County Fair in Linn, MO

As the 2020 season continues, Casper encourages her fellow showmen to do whatever they can to keep their businesses afloat during this pandemic. “In 50 years of business I've never seen anything like this but in this industry we always have to fly by the seat of our pants and take things day by day,” she says. So far, Casper has not received any news of cancellation from her 2021 events and, in fact, has received calls for new bookings next Summer. “Events are looking for carnivals and people are happy to have something fun to do outside of the house. Even after questioning myself about opening, seeing how my rides bring joy to people has such a positive affect on my mental health and I have to keep going,” says Casper.

PBJ Shows opened its 2020 season at the Jefferson City Jaycees Fair in Jefferson City, Missouri. The show put in place rigorous safety measures to insure the safety of guests during the COVID-19 pandemic.