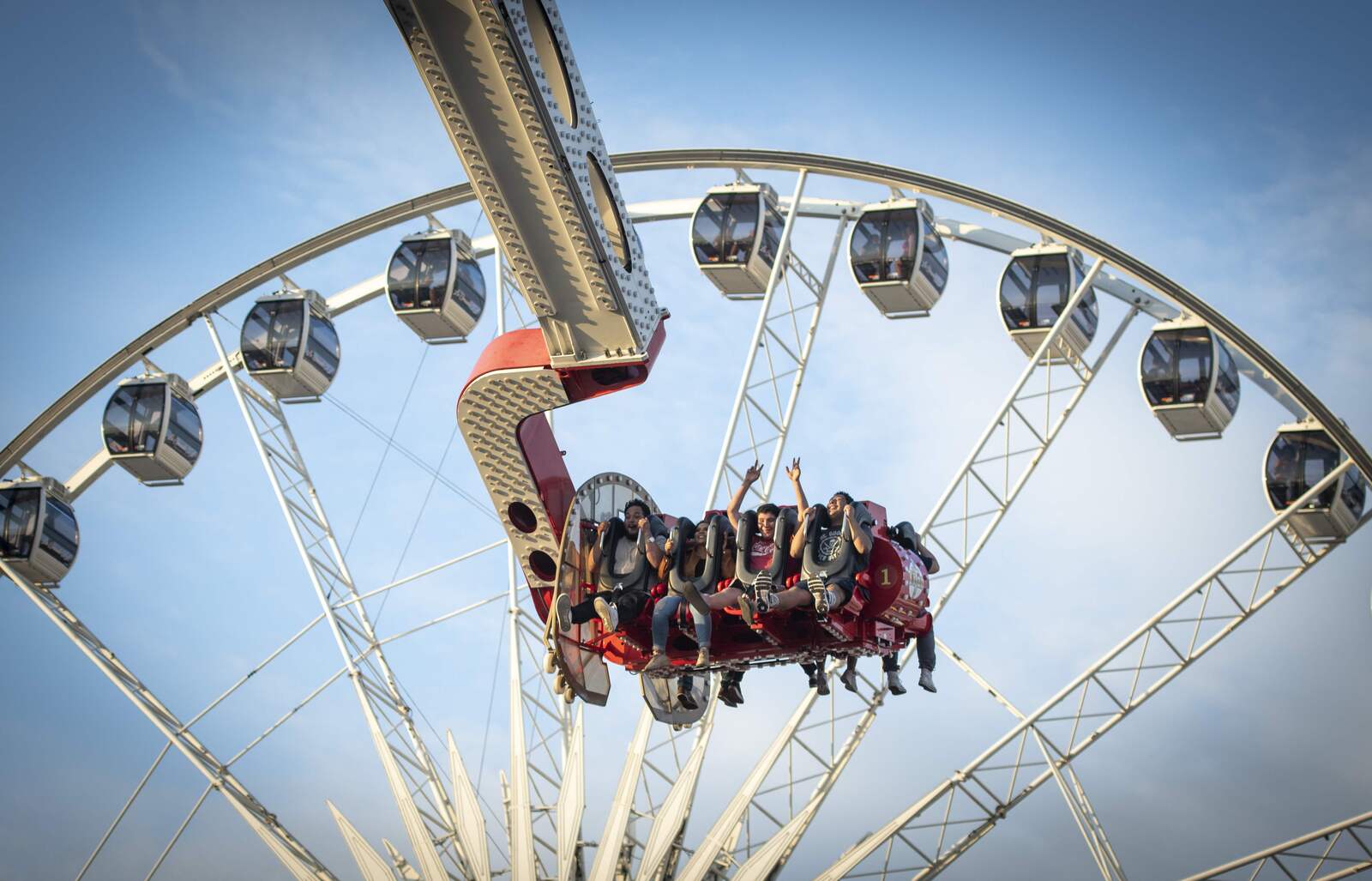 Ray Cammack Shows (RCS) on the Midway
Phoenix based RCS provided the midway for the 2022 Orange County Fair.

“Orange” you glad you came? Preliminary attendance numbers are in for the Orange County Fair, and it looks to be close to 1,055,173 visitors who attended this year's event. Eleven fair days were sold out during the 2022 run, which ran from July 15 to August 14th. The fair was open Wednesdays through Sundays during this period.

According to Orange County Fair CEO Michele Richards, fair organizers are focusing on enhancing the fair-going experience, rather than breaking any records.

“Bigger is not always better,” she notes. “[Prior to limiting attendance numbers] it was a drain on our resources and a bother to our neighbors.” 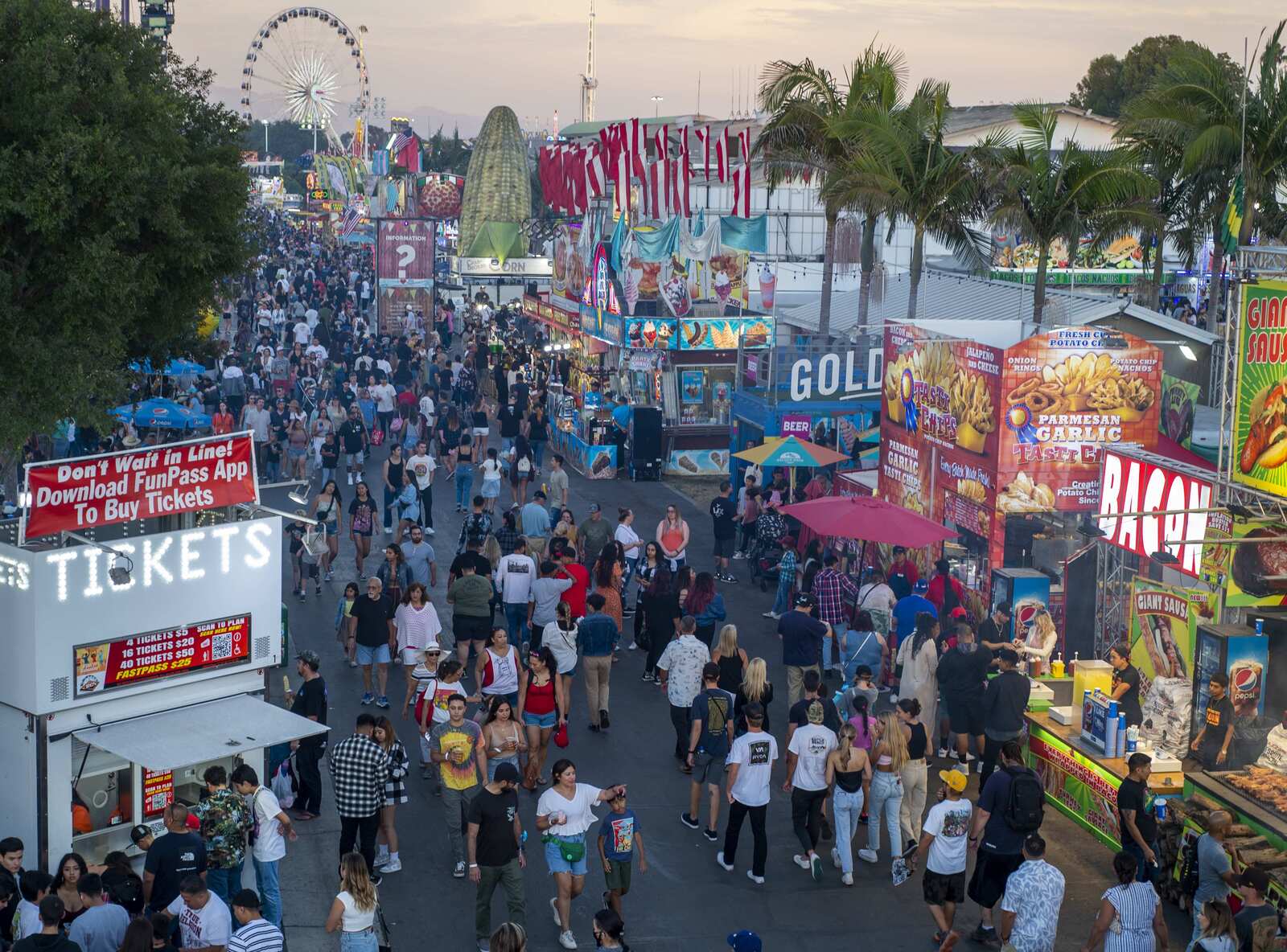 With that in mind, ticket prices were kept the same as last year, and attendance was limited to allow for shorter lines and more room on the fairgrounds. Limiting attendance began last year after a 2020 cancelation, and the idea behind it for 2021 was to prevent COVID-19 spread. While pandemic health is still worthy of consideration, this year it was more about what a good time the fairgoers described having last year, and wanting to preserve that experience for guests in 2022.

“The annual OC Fair is very special and important to the community,” Richards attests, adding that “it's a thrill for our team to plan and produce an event that resonates with our guests throughout Southern California and beyond.”

With a theme of Feel the Sunshine, eleven fair days were sold out, as were twelve concerts held at the fairgrounds in the Hangar, and eleven at the Action Sports Arena.

Attendees enjoyed arcade games and carnival rides, arts and crafts, livestock, plenty of children's activities, and lots of food and music. Plus, there were racing pigs and a Demolition Derby.

At the Action Sports Arena, the most popular events included monster trucks and the Speedway. Rides were provided by carnival ride purveyor RCS. The Sea Ray, new to the midway this year, was a big hit, as were returning favorites such as the La Grande Wheel XL. There were two ride areas this year, the Main Carnival and Kidland. Ride and game tickets and unlimited ride wristbands were available online. A fair FunPass allowed ride and game tickets to be loaded prior to attendance. 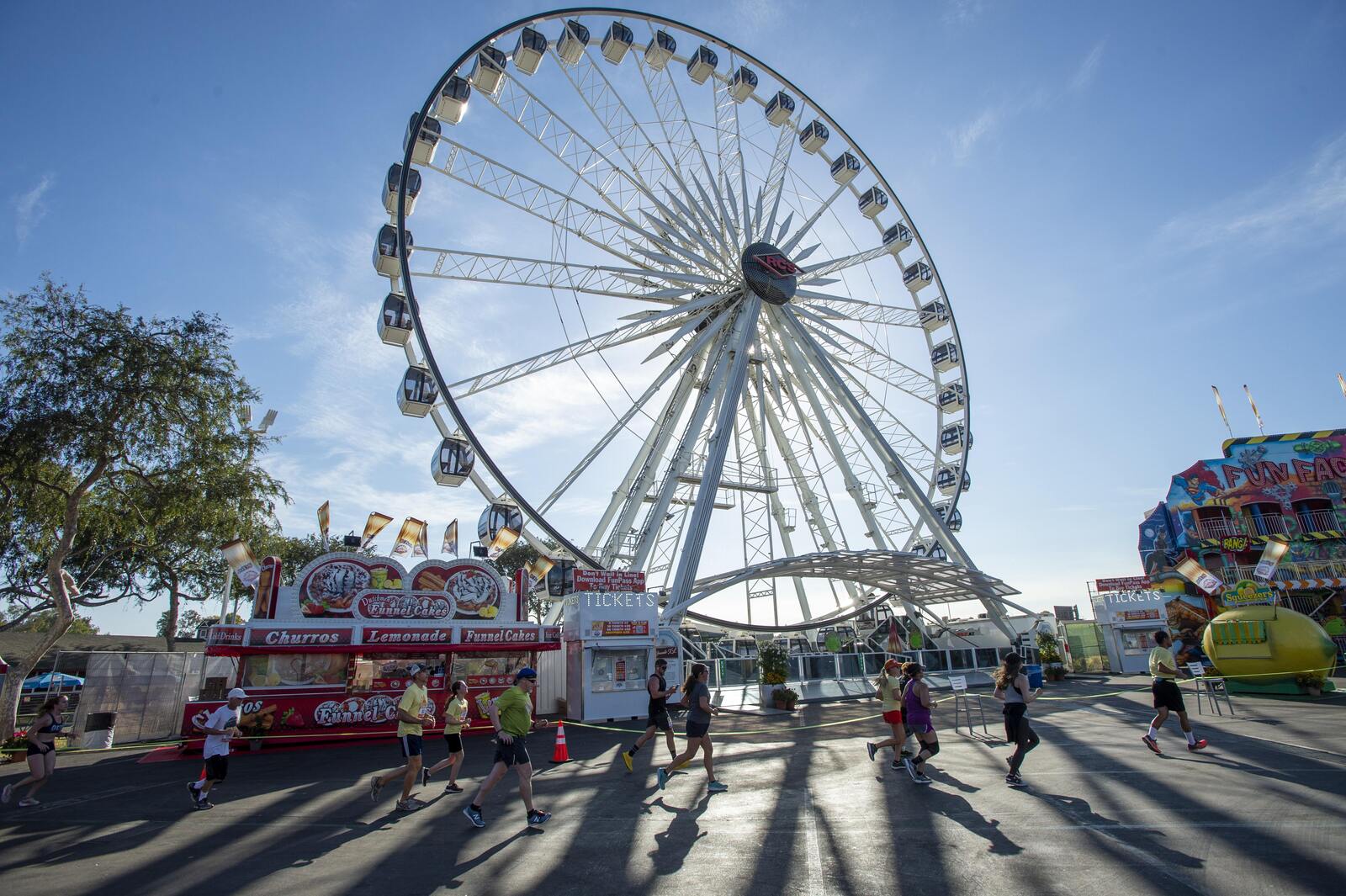 Unlimited ride carnival wristbands returned this year for $49. Carnival and ride tickets could also be purchased online; they were priced at $1.25 per ticket with per ride costs varying between 2 and 14 tickets.

Along with the carnival and entertainment, kids could also enjoy the Explorium – a “fun on the farm learning and play area.”

While the games and rides on the midway were big attractions, other entertainment options were everywhere from a roaming brass band to the Dragon Knights Stilt Show. Five stages in all featured live music, dance, and comedy acts, including U4 a Tribute to U2, Sean Oliu & The Coastline Cowboys, and The Joy Reunion among many others.

Food sales were strong, with new tastes ranging from a float with hot Cheetos toppings and pot stickers made with Cheetos batter. Three new concessionaires offered tasty treats: Garlicky's with garlic dogs, garlic sausages, and garlic chicken kabobs; ice cream, shakes, and frozen bananas from Sweets By Cardinali; and vegan and gluten-free pastries along with coffees from Moongoat Coffee. Among the popular items were a cherry Kool-Aid Chicken Sandwich from Chicken Charlies; a relatively healthy OC Deluxe Avocado Toast topped with onions and tomatoes from Ten Pound Buns; and a Hot Cheeto Chicken Sandwich courtesy of Biggy's. Considering the plethora of Cheeto-utilizing food items, it's safe to say that the cheesy treat was a major trend at multiple vendors.

But while experimental food fun was everywhere, as always, fairgoers could also enjoy plenty of traditional fair food items too, from funnel cakes to pizza and cinnamon rolls. And along with that Kool-Aid chicken sandwich, Chicken Charlie's sold 20,000 deep-fried Oreos and 5,000 bacon-wrapped pickles. 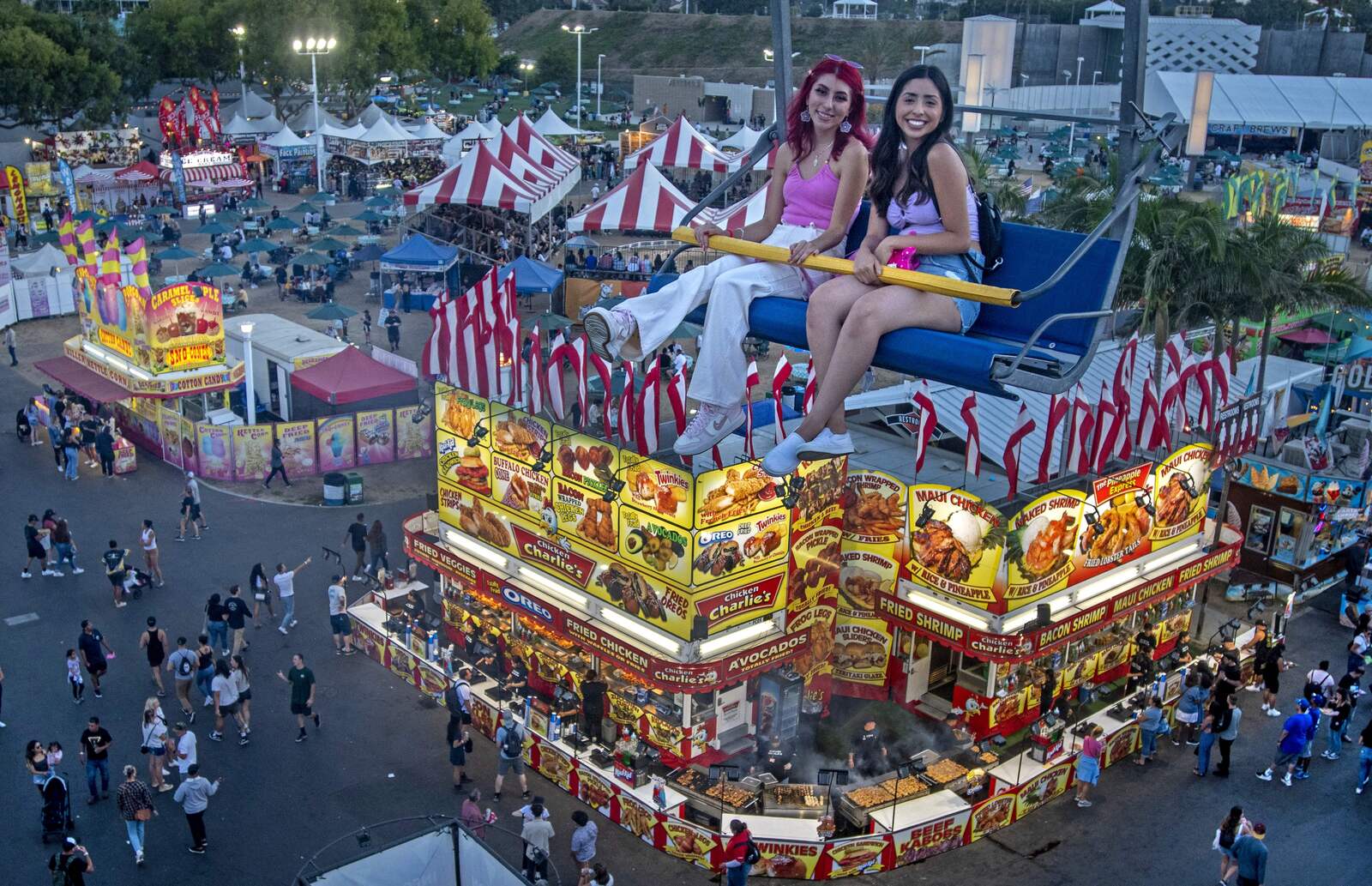 Allowing for many different taste sensations, the fair offered a $4 Taste of the Fair with sample sizes from select vendors, every Thursday from 11 a.m. to 4 p.m.

A new dining destination this year – at least for beverages, was the Blender Bar. Located inside the Culinary Arts Building on the fairgrounds, fair attendees could mix their own smoothies or margaritas by peddling a special blender bike.

Animals are always a main attraction at any fair, and along with daily animal judging and displays, the Great American Petting Fair, and resident animal educators at the Centennial Farm provided plenty of lively interaction with the animal world. Four peachicks - baby peacocks/peahens, five goats and 20 piglets were born at the farm during the fair's run. There were even daily cow milking demonstrations.

Agriculture students auctioned 153 animals that they raised, for earnings of close to $243,000.

And of course, there were competitions in produce, flowers, quilting, baking, visual arts, woodworking and so much more. Cal Fresh presented an exhibition on the state's crops daily, too.

Looking ahead to 2023, Richards is exploring ways to offer an unlimited admission option plus discounts on entertainment and rides, a super pass type of attendance that has been available in the past, but was nixed in efforts to limit crowds. It may be back, in some form, next year. 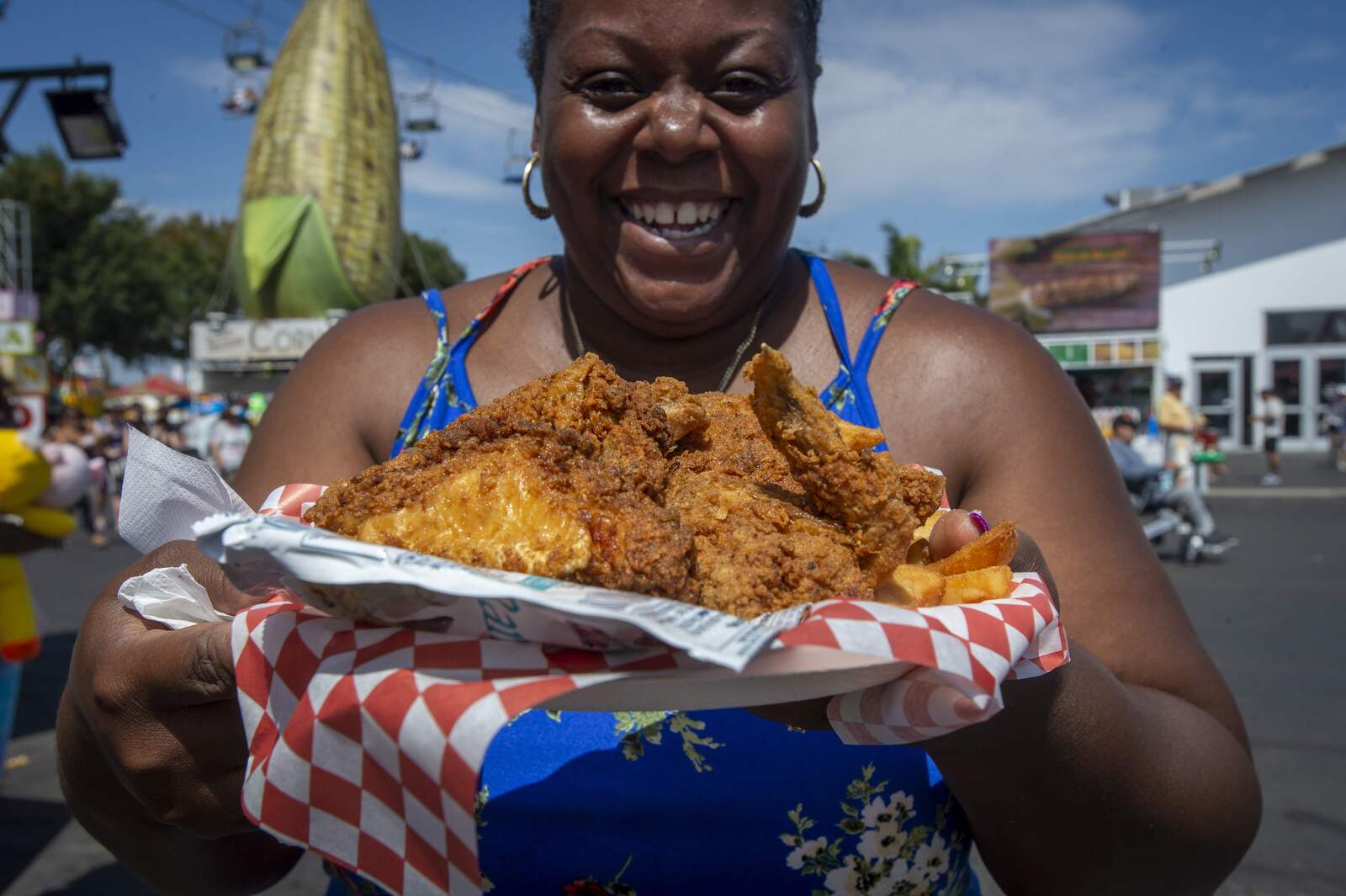 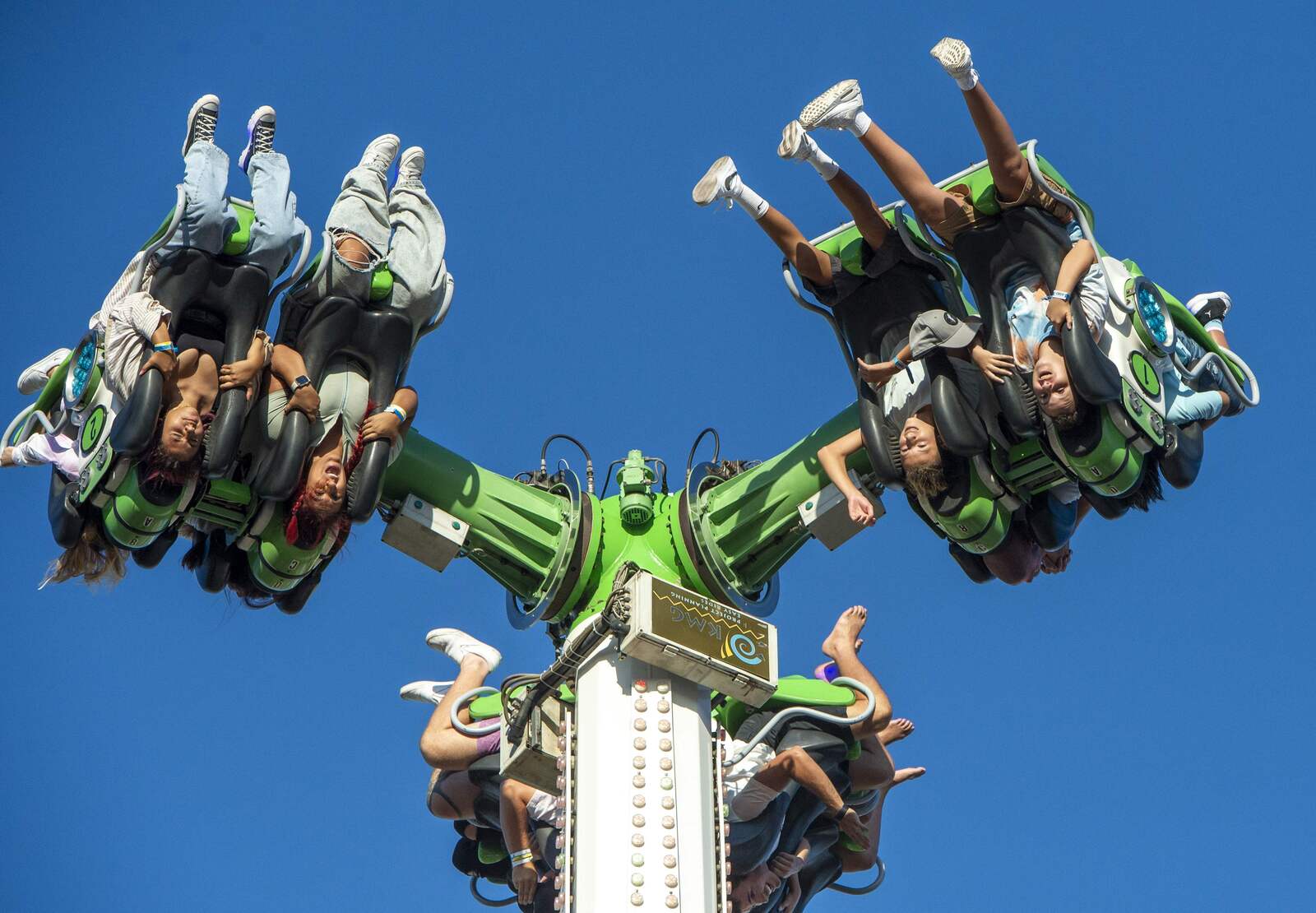 Phoenix based RCS provided the midway for the 2022 Orange County Fair.