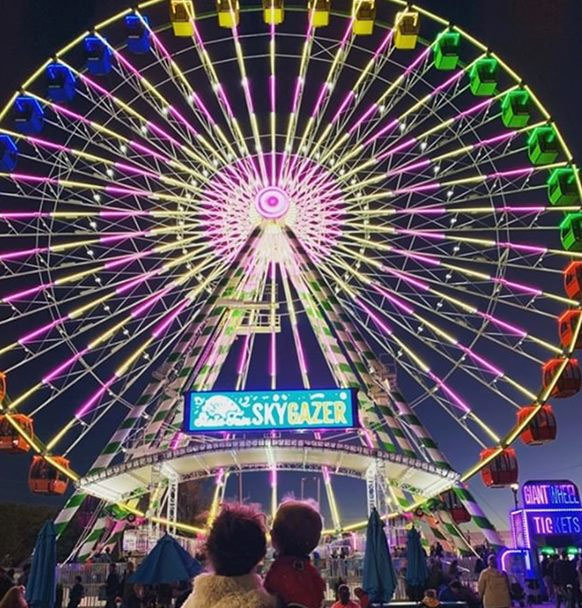 The North Carolina State Fair experienced a slight dip in attendance, but enlivened by a revamped marketing campaign which was spearheaded by a naming contest for the debut of the tallest travelling Ferris Wheel in North America.

Powers Great American Midways provided a 98-ride footprint, and while the fair would not releases ride revenue, according to Kent Yelverton, Fair Manager. Kent Yelverton. “Our contract with the carnival is not receipts-based. We are told it was a great year for our carnival.”

The unquestionable highlight of the midway was the North Carolina debut of the Lamberink RL45 Wheel, which stands 45 meters (about 155 feet) tall and features 36 gondolas and five loading positions and is considered the tallest traveling Ferris Wheel in North America. The ride is owned by Biggest Wheel LLC, a joint venture by industry veterans Frank Zaitshik of Wade Shows and Michael Wood of Wood Entertainment.

For its debut at the annual celebration of the Tarheel State, the fair began promoting the ride with a naming contest in April – a full six months before opening day – inviting fairgoers to christened the ride. Reportedly more than 1000 entries were received before the winning entry was selected – State Fair SkyGazer – and announced in the Summer, giving the fair ample time to create promotional deals and marketing contents (one ad featured an image of the SkyGazer with the tagline, Yeah It's Big. )

“The newest midway promotion was during our advance sale period,” said Yelverton. “We combined a Fair admission ticket with a State Fair SkyGazer ticket for a discounted price. This allowed us to pre-sell over 11,000 SkyGazer tickets.”

In addition to the presale, the State Fair SkyGazer became the centerpiece of the 2019 marketing campaign. “The State Fair SkyGazer also turned into a real win-win for the Fair and for Biggest Wheel, LLC,” he said. “That partnership allowed us to bring in an attraction our state has never experienced. We built out commercials and digital advertising around its promotion, and it definitely was the talk of Raleigh from the time it started being built in October through the Fair. We consistently had cars parked in the lot closest to it just to watch as it was being assembled.”


Nothing Could Be Finer


The fair's marketing budget was $890,000 and its main tagline was the perennial Carolina favorite—Nothing Could Be Finer. The drift away from old media to more digital planforms continued. The 2019 marketing allocation was: 52 percent digital; 38 percent traditional (TV, radio & print); and 10 percent experiential including out-of-home and events.

Digital now spearheads the North Carolina State Fair marketing efforts, mainly due it is ability to generate more trackable metrics. “We have consistently increased our digital spend year-over-year,” said Yeleverton. “Being able to instantly track conversion rates and see our marketing directly leading to sales has been the key to increasing our advance sales revenue. We still deploy traditional means to expand brand awareness, but with the ever-increasing costs of traditional media without the definite correlation to sales, I expect our digital spend will continue to dominate our mix in the coming years.”

The digital expansion utilized experiential storytelling and an effective emphasis on increased Instagram usage. “We moved away from Snapchat posting and more toward Insta-Story posting for the 24-hr life cycle,” he said. “We're seeing trends of people watching Insta-Stories more than they are even looking at their feeds. The interactive features in stories also allowed us to have more of a conversation with our followers. We saw increased engagement from users when using those two options.”


Taste of the Fair


One of the most successful of the fair's 2019 marketing combined social media, experiential marketing and the fair cuisine. The fair's Taste of the State Fair event, a pre-fair promotion  that featured a food truck, fair food samples, ticket sales and visits throughout the Raleigh Market.

“Our Taste of the State Fair event combines promotion on social media with a traditional event to increase sales and build awareness,” said Yelverton. “ This year, we had a food truck branded with our imagery out at 4 different events in the Triangle in one weekend. People who came out could purchase their Fair tickets, play a couple of games for prizes and try deep fried Oreos or deep fried mac-n-cheese with their purchase. This is the second year of the event and we've seen revenue growth year-over-year.”

This outreach is the final stage of the marketing campaign, concluding shortly before opening day and intended to accentuate the local buzz. “ ‘Taste' serves as the kick-off to the final push of our advance sales period and is scheduled close enough to the Fair to get the media and community buzzing,” he explained. “This year, we invited 50 micro-influencers to come out just prior to opening the event to flood their channels with Taste of the State Fair. We also provided them with prize packs to do contesting in the following weeks.”

According to Yelverton, the Taste of the Fair event resulted in: $24K of direct sales; 1.4M impressions; 19K engagements and 10K website clicks.

â€‹The fair showcased 157 food vendors, with additional promotion being the food contest – “People's Choice Fair Food of the Year was the Crack-n-Cheese Stuffed Turkey Leg. That's a turkey leg stuffed with turkey bbq and mac-n-cheese and topped with bbq sauce and turkey cracklins,” he explained.

Though the fair staples ranging from fried Oreos to funnel cakeS, Yelverton noticed the new trend is that fairgoers are “consistently asked for healthier options to eat while attending,” said Yelverton. “We've been listening and brought in Island Noodles to serve up stir fry, Billie's Baked Potatoes and several other vendors also included healthy options including a first for us at the North Carolina State Fair – Dole Whip by Tropical Delights, which was voted our Media's Choice Best New Food.”

â€‹It was Yelverton's second year as manager, and he added some unique tweaks to the fair. For instance, the fair's Flower and Garden Show, which he said “ has traditionally been a refuge away from the hustle and bustle of the midway. But this year, he scheduled a Cast in Bronze, a 35-bell carillon to perform. “This act was our most talked about performer on social media,” he said. People thoroughly enjoyed the performance and reported that it enhanced their time in our gardens.”


The weather for the fair was generally good, although thunder storms were threatening and passing showers were experienced. “We had several days that rain threatened, but those proved to be the best days to be at the Fair,” he said. “We had a couple of showers, but as soon as they passed, everyone was ready for fun. We even had several comments from people who discovered all the fun they could experience indoors during the showers.”

Attendance reached 938,029, which continues a trend of dwindling attendance for the event. “While still a strong attendance for us, it was a bit lower than last year,” he said. “We feel like it was a strong fair this year attendance-wise. Weather is always a factor in that, but we finished with close to a million people, had a record Food Lion Hunger Relief Day donation and our competitive exhibits had outstanding numbers, our concerts were well attended, our Junior Livestock Sale of Champions was a success and by the end of the Fair, we were wishing for another day. Overall, it was a great event that our Fairgoers enjoyed, and we couldn't ask for more than that.” 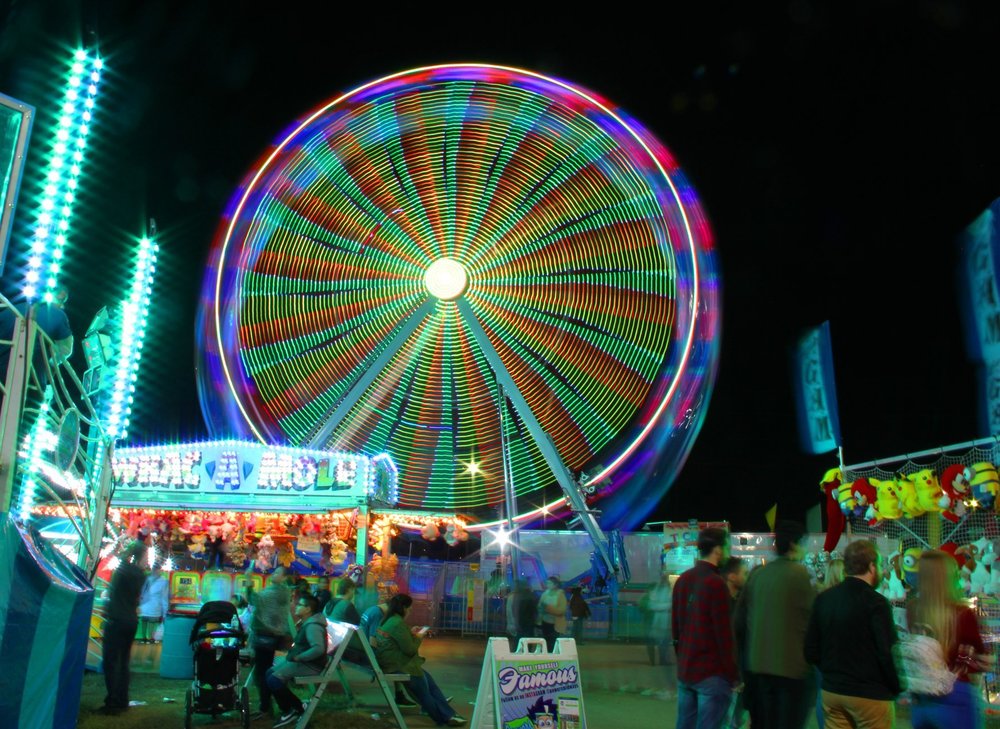 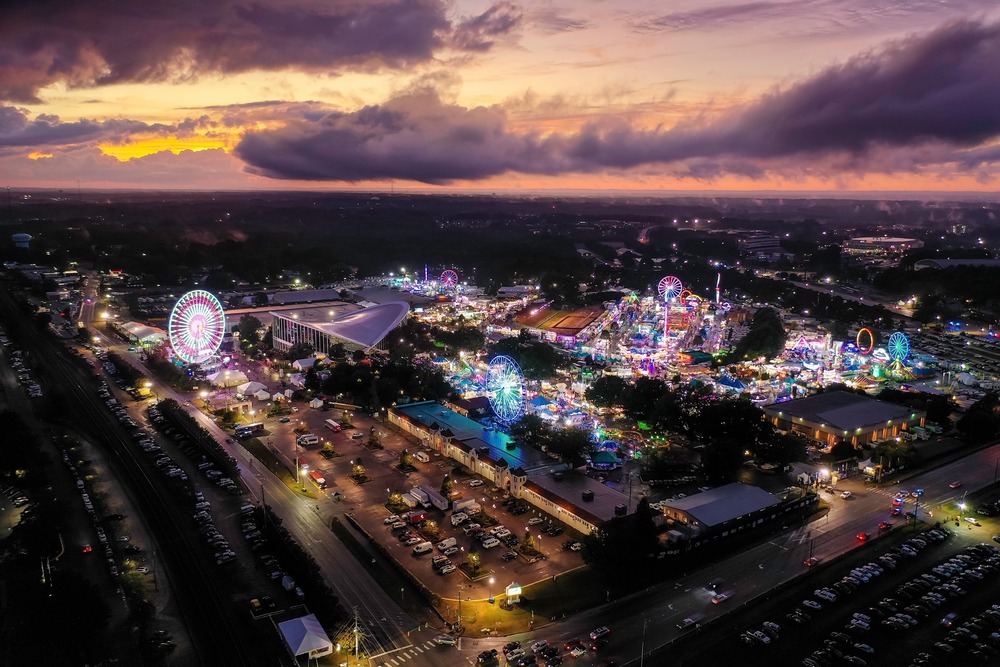