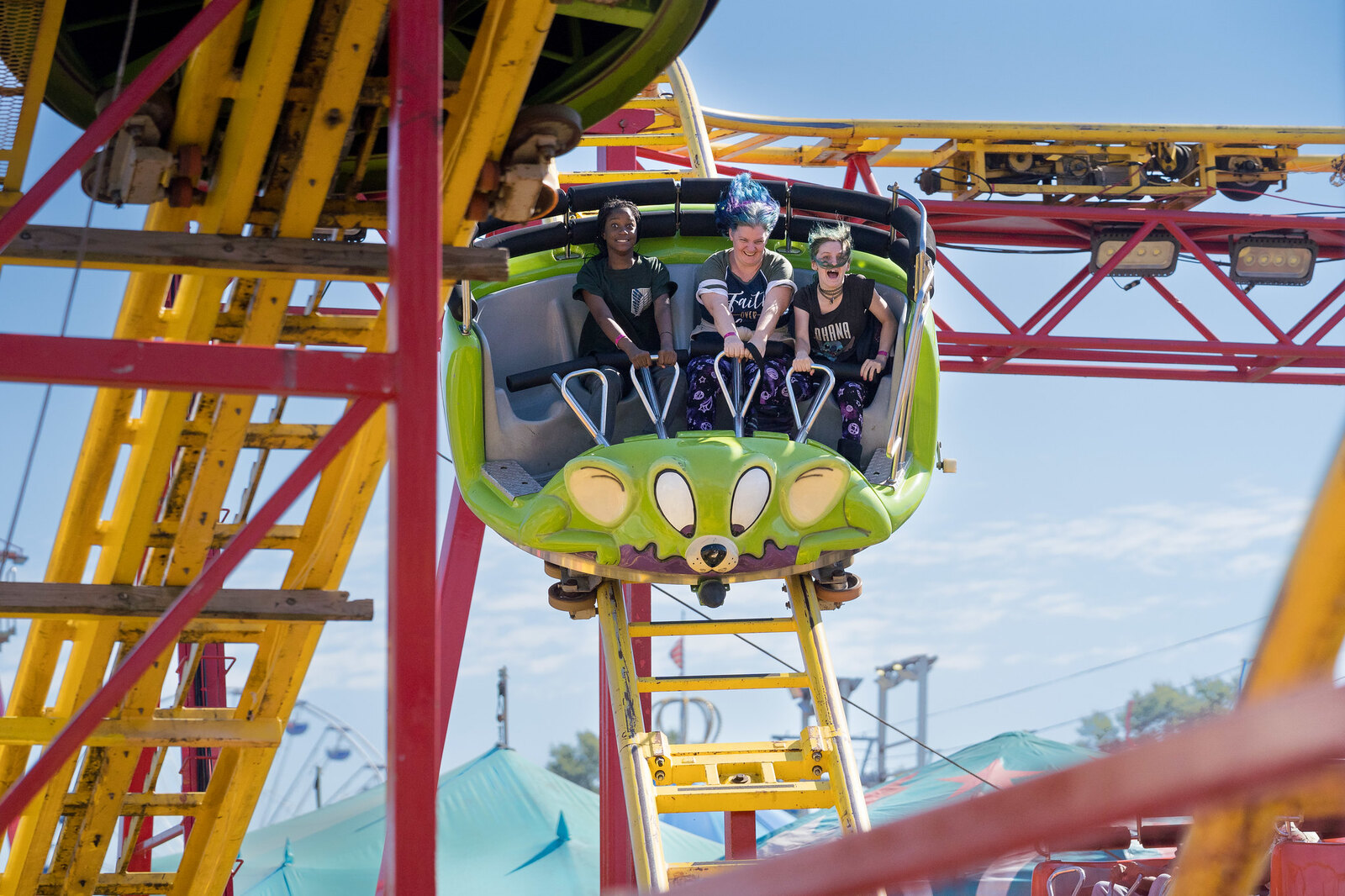 Often the highest attended fair in the southeast, the North Carolina State Fair typically ranks in the Top 50 Fairs in North America. The fair had seen steady growth pre-pandemic, and now post-lockdown, has had one of the strongest comebacks of the year. The 2022 attendance reached 960,172, 16 percent higher than  the 2021 event, and not only exceeded the 2019 attendance, but was above the fair's 10-year average of 958,497.

Industry observers have been keeping a watchful eye on the annual celebration of everything Tar-Heel, not just because of its continued support by its community, but it is one of the largest fairs to reimagine the relationship between headline entertainment and the agricultural mission of the fair. The North Carolina State Fair has eliminated not just grandstand headliners, but the grandstand itself. With production costs and artist asking prices steadily rising throughout the past two decades – and the drawing power of many fair circuit stalwarts falling into doubt, especially with Gen X, Y & Z population segments –many fairs are reconsidering the role of big names in their entertainment offerings. 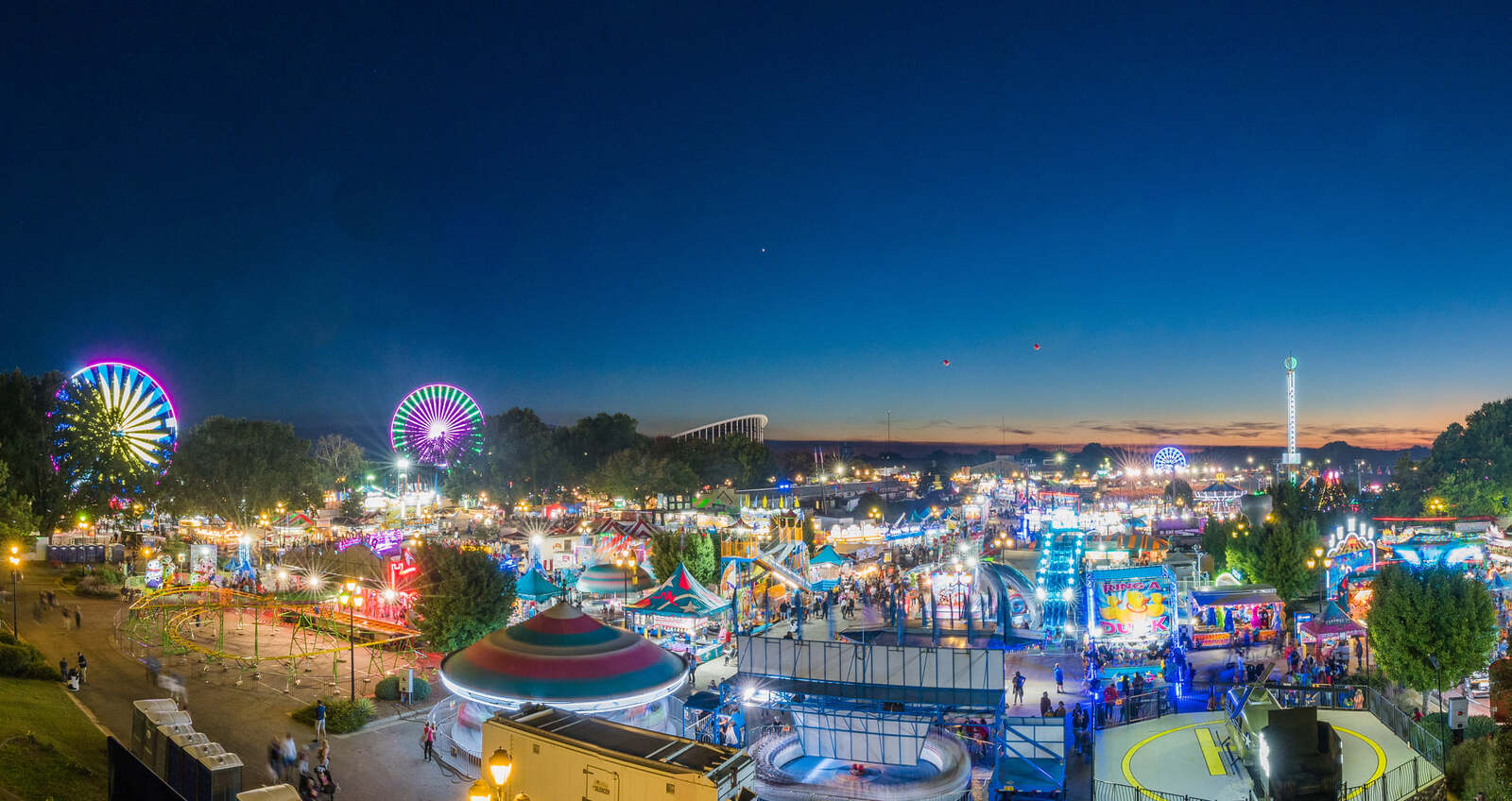 Got To Be NC

Even though its main concert venue was now committed to agriculture, the fair actually had more music than ever before, and like the new pavilion, the stages showcasedlocal and North Carolina grown.

“We have two outdoor stages that provide free music entertainment daily,” he said. “This year, we had 106 sets played on those two stages, entertaining fairgoers and supporting local homegrown North Carolina musicians.”

Mother Nature proved to be a very cooperative for the fair, with only minor shower activity on the first Thursday of the 11-day run. After that bit of precipitation was out of the way, “we couldn't have asked for better weather. Clear skies during the day, with a crisp hint to the air at night…the perfect North Carolina State Fair day,” said Yelverton.

“We were blessed with good weather and we made the most of it, with a total of 960,172 people attending the State Fair this year,” said Agriculture Commissioner Steve Troxler. “It truly was a celebration of our state's $92.9 billion agriculture industry, from the daily farm families highlighted, the mock tobacco auction, livestock competitions and horse shows to the horticultural displays, Got to Be NC Agriculture Pavilion and soil and forestry exhibits.” 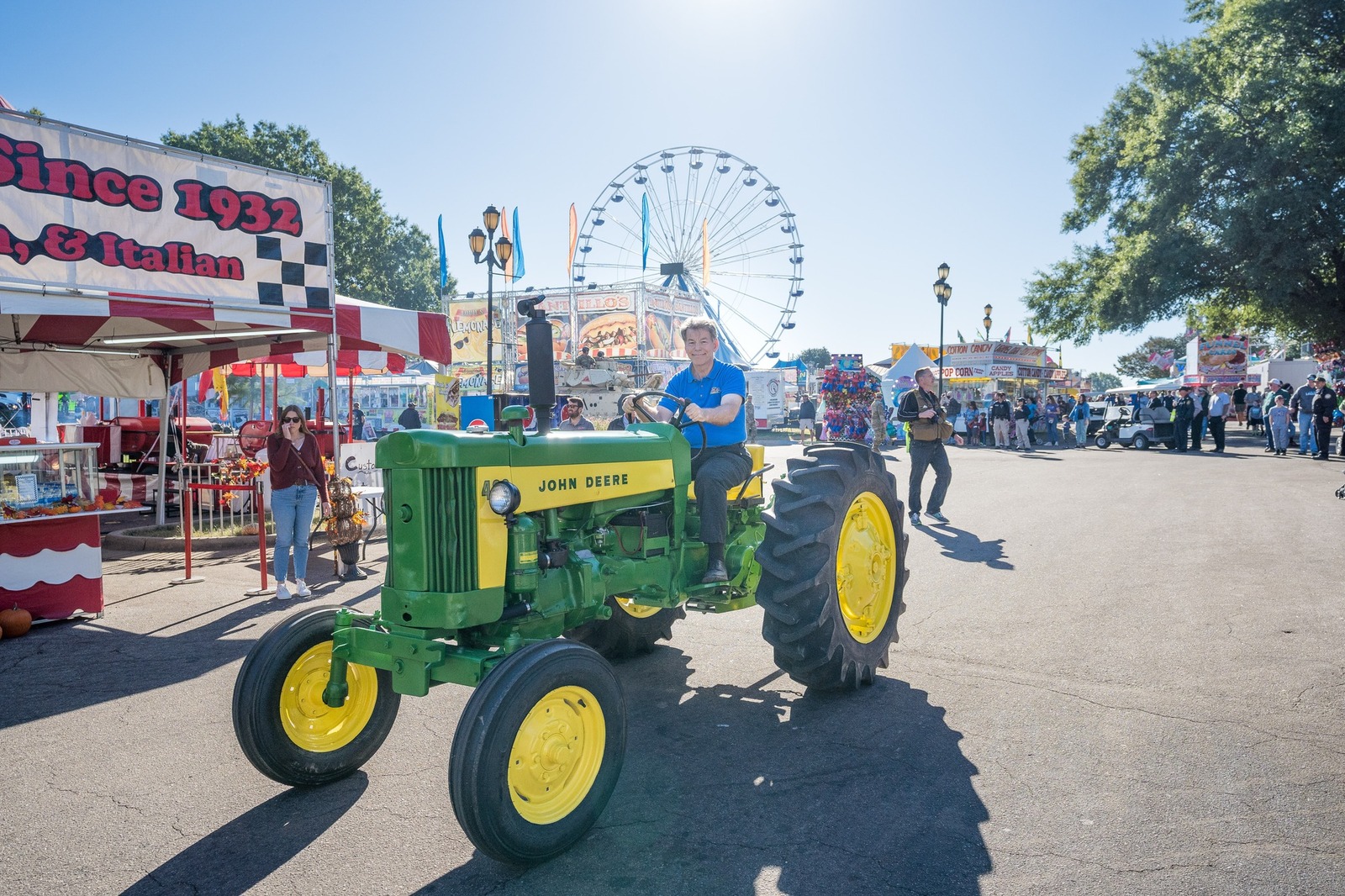 The successful implementation of the new changes at the fair had a genuine page-turning effect, putting the pandemic and post-lockdown woes in the past and appreciating the fair-wide improvements, plus the recommitment to agriculture. “We couldn't have asked for better weather, better crowds or a better time,” he said. “We truly felt like we were back this year. Some of our changes last year were new for fairgoers, we were able to add a significant number of new vendors, our midway provider reconfigured their lot lay-out to move rides into new locations and our sponsors and partners really stepped up with some grand-scale activations. All this combined with the new features for this year left the fair feeling fresh, new and exciting to fairgoers who have made the N.C. State Fair a tradition for their families. We really felt like we were “back” this year.”

One of the most visible changes immediately confronted fairgoers with new efficiencies. “We made some major changes by creating a new ticketing gate and a new parking area with a tram straight to the gate that fairgoers made the most of,” he explained. “This allowed us to maximize the space we have and delineate three separate gates for our busiest three parking areas. This spread the crowd and eased entrance wait times. We also implemented self-serve ticketing kiosks at our busiest gates within site of the ticket booths so that if there was a ticketing line, a fairgoer could make the decision to use the self-serve option. These were extremely popular, and we are making plans now to expand this option for all ticketing gates and for some of our auxiliary parking lots” 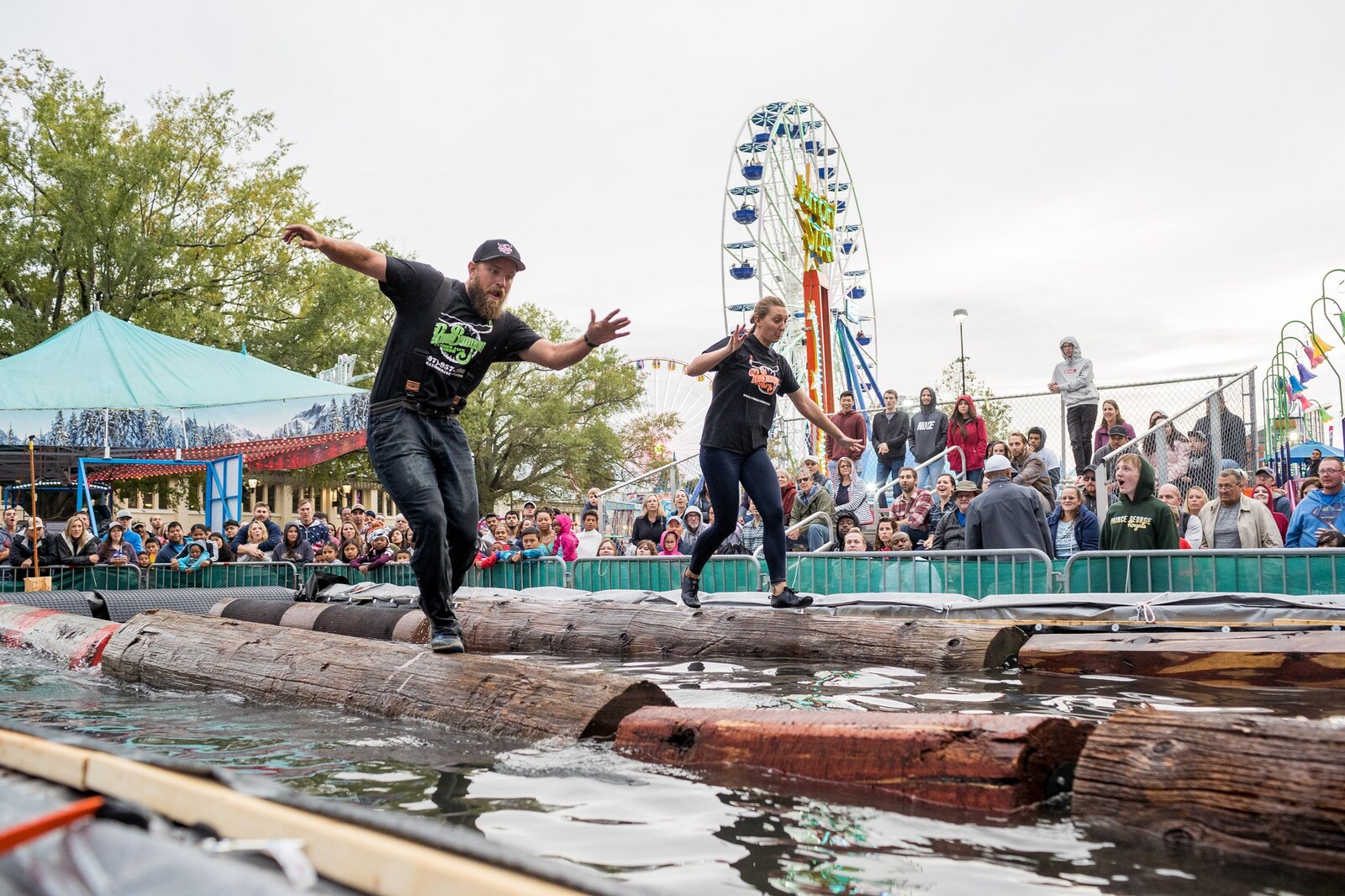 Enhancing the fairgoer experiencing and repositioning community and local agriculture and talent certainly influenced the 2022 marketing campaign, whose tagline – So Happy Together – evoked the ideal of annual tradition. “When we sat down to brainstorm themes, we wanted to reflect on where we were last year (2021),” he said. “The 2021 theme was ‘Worth the Wait' and spoke to the N.C. State Fair being back after closing in 2020 due to the pandemic. We felt like North Carolina was ready for a comeback overall in 2022. People were ready to get out and be around others, make some new memories with their families. ‘So Happy Together' was what we were feeling, and we knew it would resonate with fairgoers who were ready to come together for some of the fun events they had been missing in the previous two years.”

North Carolina internalized its marketing by not renewing its ad agency contract and bringing the entire marketing program in-house. “We took a look at how we were advertising and made some significant adjustments,” he said. “Instead of going with an outside agency, we placed all advertising in-house and focused on niche demographics and the power of the “share” on social media to promote this year's fair. Our spend came in at less than 50 percent of our previous spend. This did eliminate all television advertising with a focus on digital advertising, radio and some print.”

For 2022, the media allocation budget-wise was: Digital – 52 percent; Radio – 36 percent; Print & Photography – 12 percent. “With a complete cut of broadcast and cable television, we focused more on specific target audiences that included Gen Z, families with children and young professionals new to our metro area. We also dedicated a significant spend on Latino radio stations and digital impressions.”

He added, “With the change to the mix, social media played a significant role in our overall activation. We were able to tailor messaging to hit niche demographics while being able to remain nimble in placements and post boosts to adapt messages for maximum share-ability.” 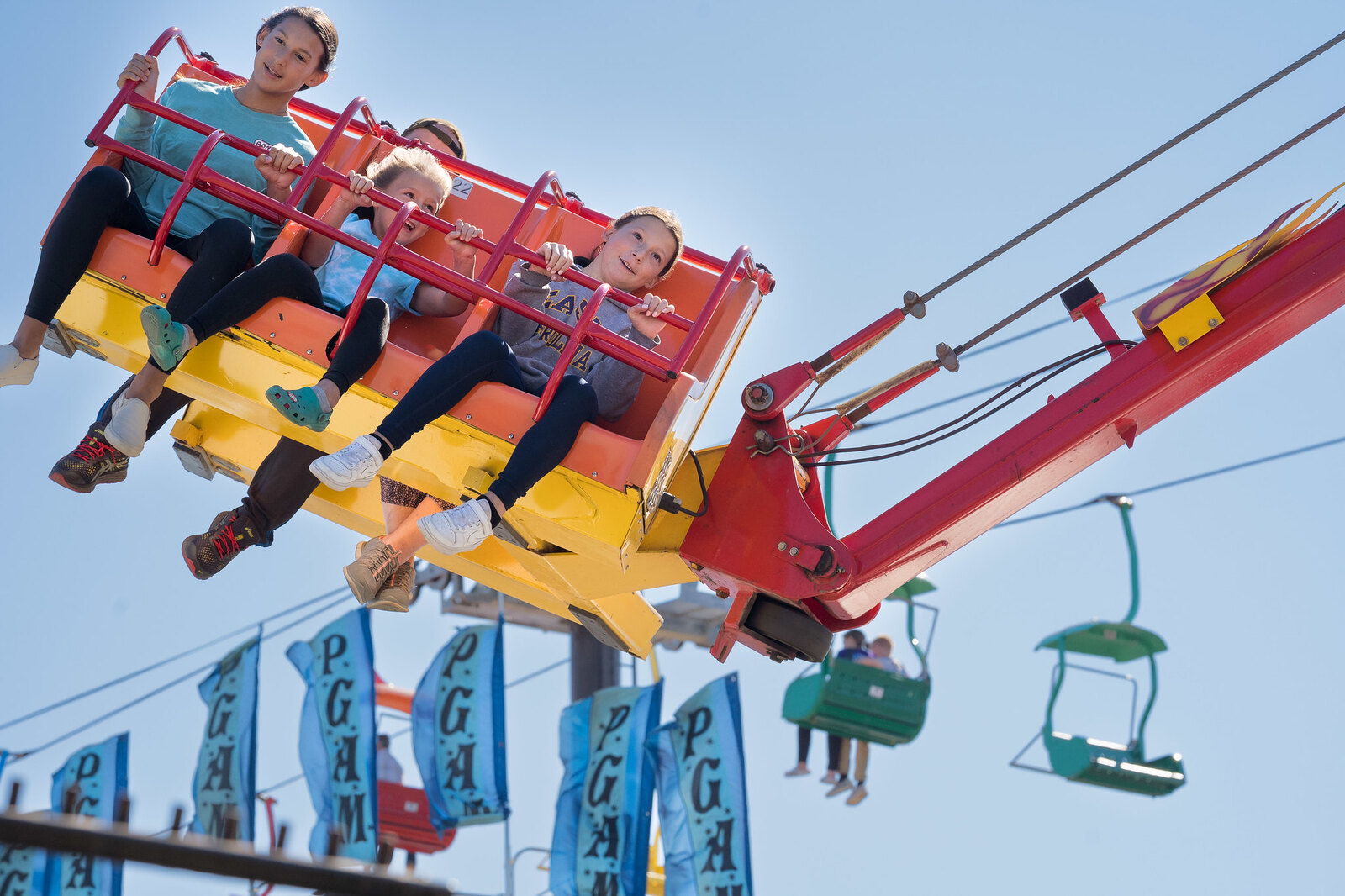 The Powers Great American Midways midway featured 92 rides, “This is consistent with years past and provided a great mix of kiddie, major and spectacular rides for fairgoers to enjoy,” said Yelverton. “We did have a total of six Ferris Wheels…the most wheels on any midway in North America.”

In addition, the 2022 edition saw the debut of the Crazy Cabs, Wave Swinger and the Air Maxx. According to Corky Powers, the rides were ordered last year before the height of the season, but with the global disruption of manufacturing and shipping, they didn't arrive until just before opening day of the North Carolina State Fair, one of the final stops of the Powers route. “They were supposed to be here in June, but we just got the trailers,” he said. “The people loved them, they were great rides and really filled our midway. I have other rides that were supposed to be here before the end of the season, but I've been told now not until after Christmas.”

Powers noticed that fairgoers were not only eager to spend and ride and stay longer, “but they were coming back more than once. It was another great year for the fair. This was a good year, but there were some locations that were down, but those seemed to be smaller fairs. The bigger locations were up, like North Carolina. Maybe it was because of the marketing, because they did a real big advanced ticket sales. People come to this fair, it has amazing community support.”

Another appeal of the fair was bargain pricing, a welcomed respite by consumers in these inflationary times. “The N.C. State Fair and our midway provider absorbed all those increases and did not raise any admission or ride prices this year,” said Yelverton. “We did see an increase in food and product prices this year, but nothing out of the realm of what all small businesses are feeling presently.”

The fair also featured 182 food vendors in 2022, with an emphasis on redefining fair cuisine. “This year, we had the most participation in our “New in 22” fair foods, with 41 new foods ranging from rattlesnake corndogs to fried North Carolina tacos and Pepsi glazed mini donuts, there was something for everyone,” added Yelverton.