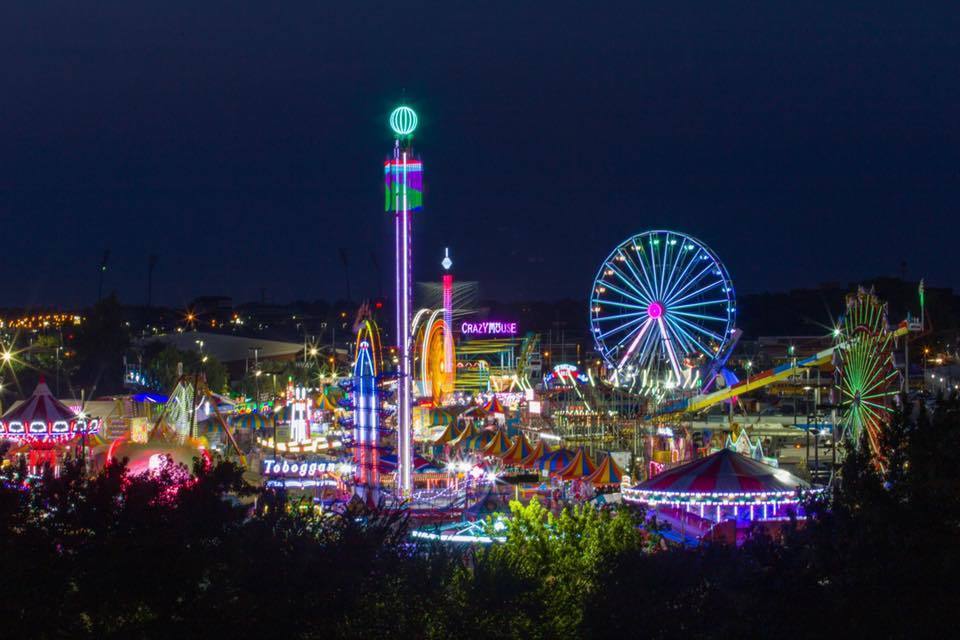 A new midway provider, improving economy, ideal weather and a major agriculture news announcement combine to reinvigorate the Ohio State Fair. The Buckeye State's celebration of everything Ohio saw a 3 percent increase in attendance and what can only be described as a return to form for fair.

In 2018, the Ohio State Fair issued a Request for Proposal (RFP), for a new midway provider. One of the largest fair midways up for grabs in recent years, the hotly contested contract was finally awarded to Talley Amusements, who replaced Amusements of America,  the Ohio State Fair midway company for more than a quarter of a century.

The fair gave its new midway company high praise, pointing out the gleeful surprise of fairgoers beholding a brand new midway at their annual statewide gathering.. “We were thrilled with Talley Amusements,” said Virgil Strickler, General Manager. “Even to the untrained eye, the midway and kiddieland areas were completely different. The fresh new layout was in more of an “X” shape, with rides that had traditionally been positioned in specific areas moving to new locations.”

Strickler cited a specific example. The centerpiece of most midways, especially at fairs as large as the Ohio event, is the towering, iconic image of the Ferris Wheel. By definition, a new midway provider means an entire makeover of a fair, and seemingly innocuous but in actuality pivotal changes, like a location shift for a Ferris Wheel, foments a fresh and exciting atmosphere. “The Giant Wheel had always been in the southwest corner of the Midway, and this year, the new Lambrink Wheel was in the northeast corner,” said Strickler. “Because Talley was an entirely new ride provider for us, the vast majority of rides were also new to the Fair. There were beautiful little touches added by Talley Amusements, like their mascot Lil Tate Talley, directional signage, matching “funbrellas” and comfort areas, branded gates and ticket booths, and even character water fountains and garbage cans.”

The midway boasted a total of 78 rides, with the top grossing rides being 1) the Giant Slide; 2) Crazy Mouse and 3) the Lamberink Giant Wheel. “There were a lot of rides we'd never seen before, like the Iron Dragon roller coaster, Cliff Hanger, Downdraft, Toboggan, as well as classics that were back after a hiatus, like the Tilt-a-Whirl,” he said. “Fairgoers were pleased with the ride diversity.”

Strickler noted the commitment to ride safety at the 2019 fair by Talley Amusements. “We were incredibly impressed with their dedication to safety, including uniforms stating ‘safety first' worn during ride construction with hard hats, an interactive tool on the Talley website that allows fairgoers to type in their height and see which rides they are able to ride, and a detailed print brochure about ride safety and rider height requirements,” he said. “The Midway and Kiddieland were clean, beautiful and fun for fairgoers; we couldn't be happier.”

Although some see hemp legalization  as step towards legalizing recreational marijuana, the facts are that Hemp is a cannabis plant that does not produce intoxicating effects. The plant is grown for its many industrial uses, which include textiles and oil that can be extracted for CBD, now being used in food and dietary supplements. The legislation sets up a licensing structure for farmers growing the crop  as well as those who process the hemp into consumer and industrial products. The U.S. hemp industry reached $1.1 billion in 2018 and is expected to exceed $13.03 Billion by 2026, according to a new report by Reports and Data.

“Yes, Ohio signed a hemp bill at the Ohio State Fair,” said Strickler. “Because of the agricultural significance of the bill, it helped draw media attention to the Fair and the bill signing. However, what it means for future agricultural programming at the Fair remains to be seen.”

Attendance Increase
Attendance at the fair increased 3 percent over 2018, a comeback year for the fair following the 2017 fatal accident. Attendance reached a robust 934,925, buoyed by a run of ideal weather. “This year's weather was absolutely beautiful, and hundreds of thousands of Ohioans turned out to celebrate our great state and experience all that the Fair has to offer,” said Strickler. “We were very fortunate to only have had some overnight rain. Our Fair also fell after several weeks of record-high temperatures, so the slight dip in temperature, often falling in the 80s, was welcomed by Ohioans.”

He pointed out that even during the height of the recession – with the decline in U.S. manufacturing, Ohio was hit particularly hard by the economic downturn – the tradition of the fair took hold with its Buckeye audience. “The recession caused people to look more closely at their spending and rather than full-fledged vacations, many choose to take staycations here in Ohio, like at the Ohio State Fair,” he said. “During this time, we have been able to build a lasting relationship with those individuals. Our research shows many visitors are repeat visitors from one year to the next – and having that first visit when their budget may have been a little tighter helped to create a lasting relationship with the Fair.”

With a brighter economic outlook prevalent this year, fairgoers loosened their purse string grip. “Per capita spending is up slightly, primarily as a result of increased food, beverage and Midway spending,” said Strickler.

Most significantly, the fair took a new approach to social media. “We expanded our use of social media influencers by hosting our first-ever VIP influencer event, at which we invited micro influencers from the area to the Fair's new beer and wine pavilion to sample select fair food, speak with vendors, and have that fair food paired with Ohio beer and wine,” he added.

The new social media campaign also included an expanded use of video. “Some of this year's most popular videos were: a Star Wars Storm Trooper attempting to go through the Fair's metal detectors, a video announcement of a baby cow who had just been born, and the release of vintage fair films found on reel and converted to digital.” The vintage footage covered the years 1939 to 1974.

In addition to utilizing social media influencers to promote the array of fair cuisine – the fair featured 195 food vendors – the marketing department created a print brochure that listed more than 40 new foods as well as a map on where to find the stands. “This map was incredibly helpful for fairgoers who wanted to try something unique at the Ohio State Fair,” he said.

Some of the new food items were made to order tacos, burritos and quesadillas (Ledesma Concessions); gluten-free Caribbean noodles and Jambalaya rice (Giuseppe's Island Noodles); and specialty grilled cheese sandwiches (Giddy Piggy). Popular signature Ohio State Fair foods include: Flamin' Hot Cheeto Corn Dog,  made by Tracey Company, a family-run concession business that has been at the Ohio State Fair since 1956, - Buckeye Funnel Cake, an Ohio-shaped funnel cake mold which played right into state pride. The funnel cake was made in the shape of Ohio and topped with traditional “buckeye” flavors, chocolate and peanut butter (and, of course, powdered sugar) and an Ohio State Fair flavored ice cream. For the past several years, Ohio-based Ice Cream maker Velvet Ice Cream creates a unique flavor exclusive to the Ohio State Fair. The 2019 flavor was Orange Moon, a creamy vanilla-orange ice cream with fudgy brownie bites and marshmallow swirl. The name was an homage to the 50th anniversary of the moon landing – the first man on the moon, Neil Armstrong, was an Ohioan and was also depicted in this year's butter sculpture. An estimated $5.4 million was spent on food at this year's fair.

“It was a wonderful year, with great weather, an increase in revenue across the board, a strong livestock auction, one of our most successful years of concerts, a phenomenal amusement ride provider and happy fairgoers,” said Strickler. “All in all, we are pleased.” 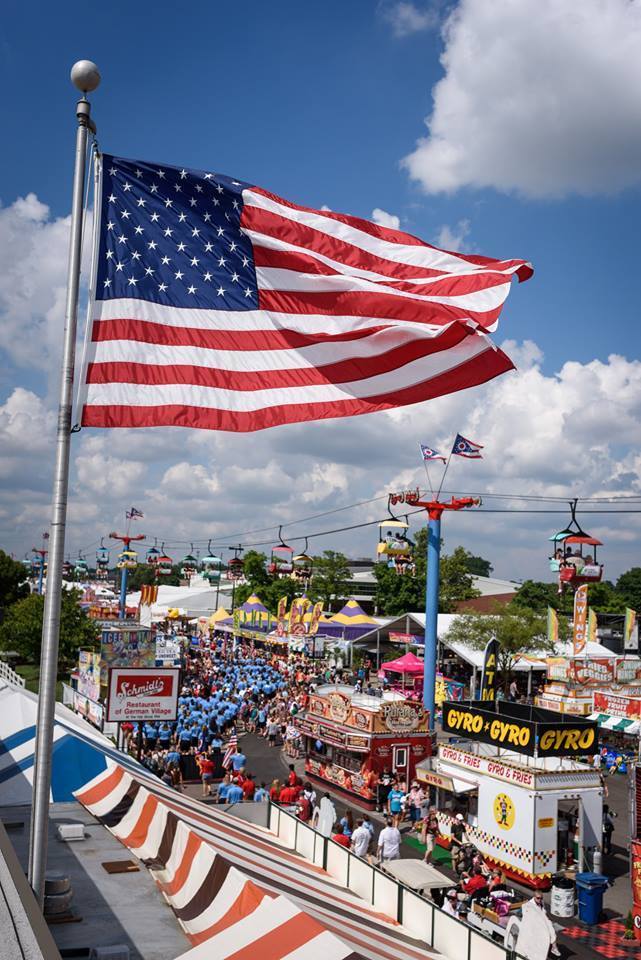 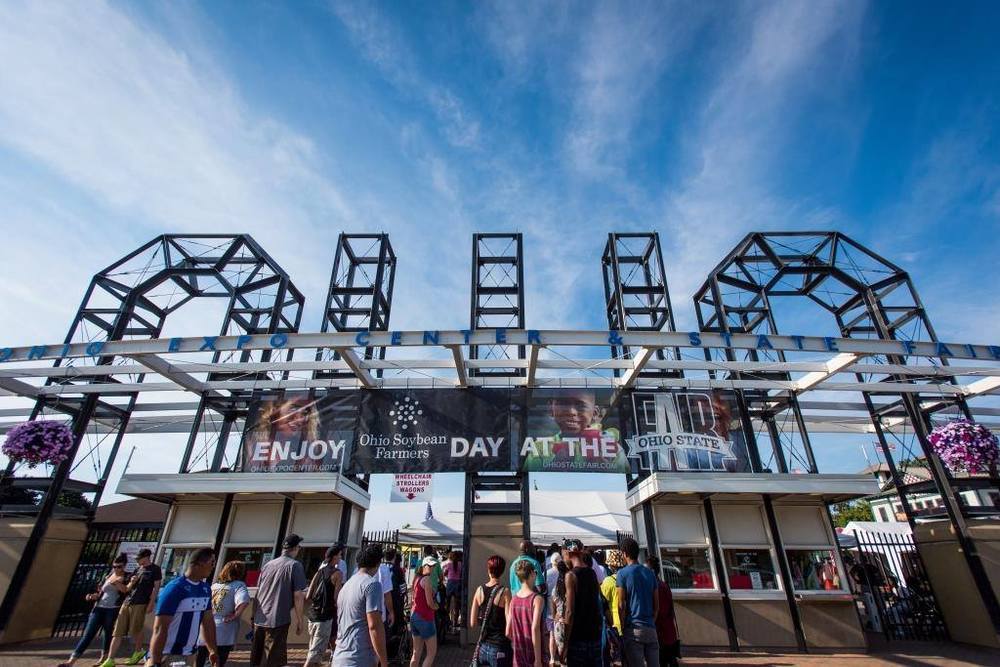 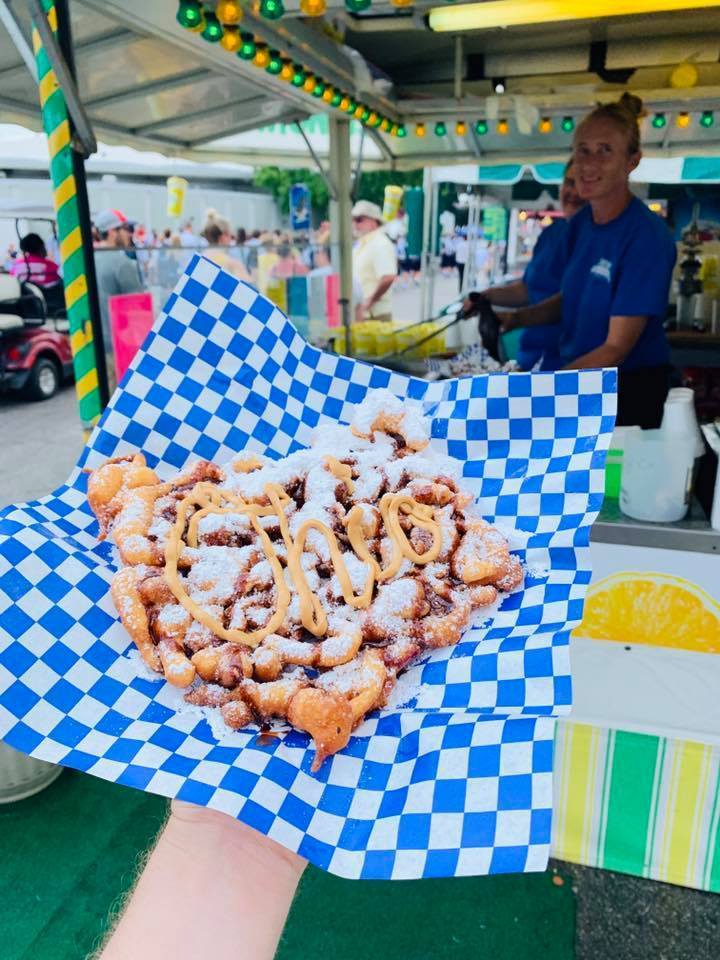 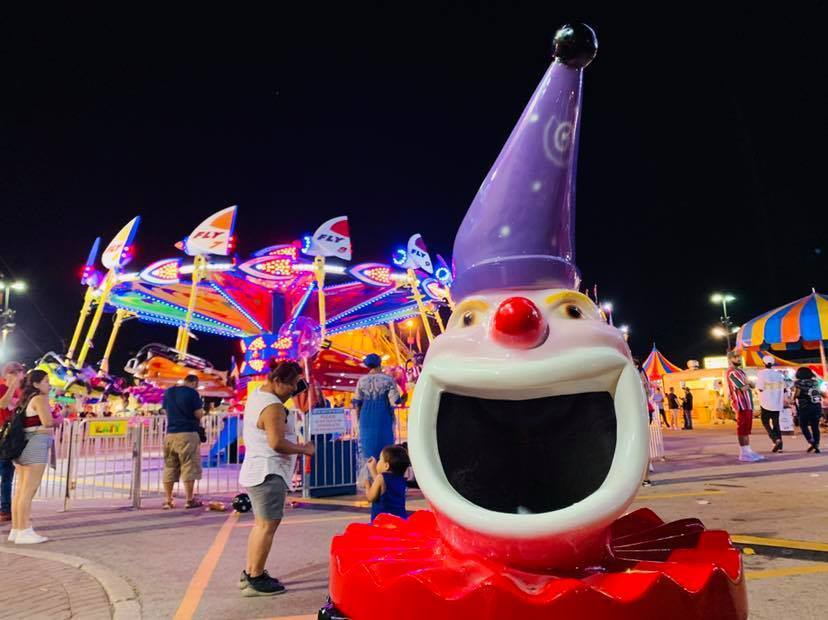 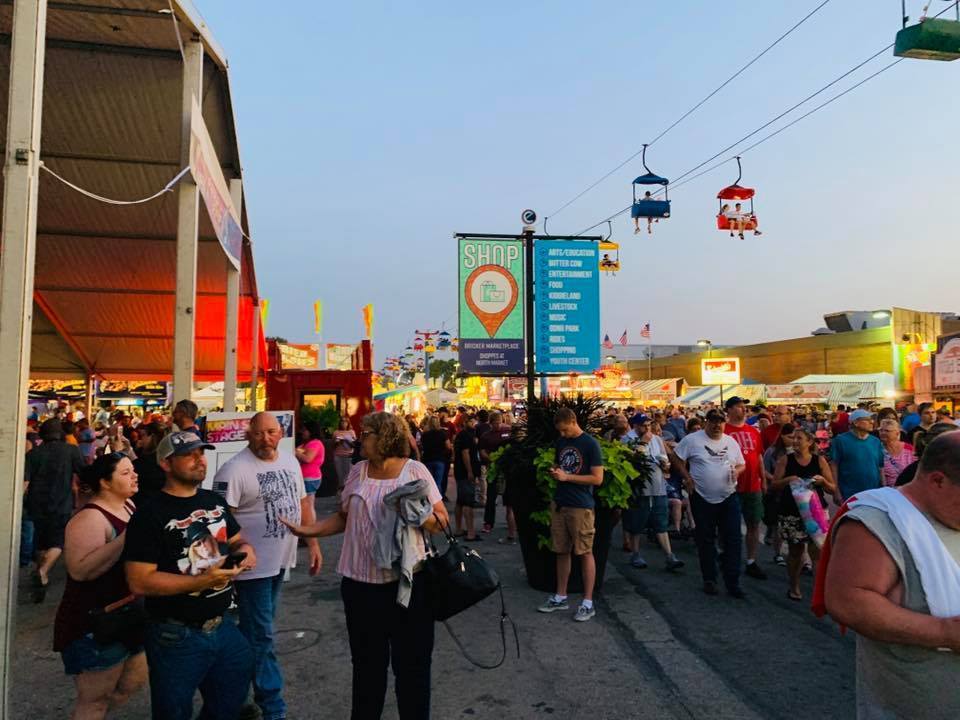 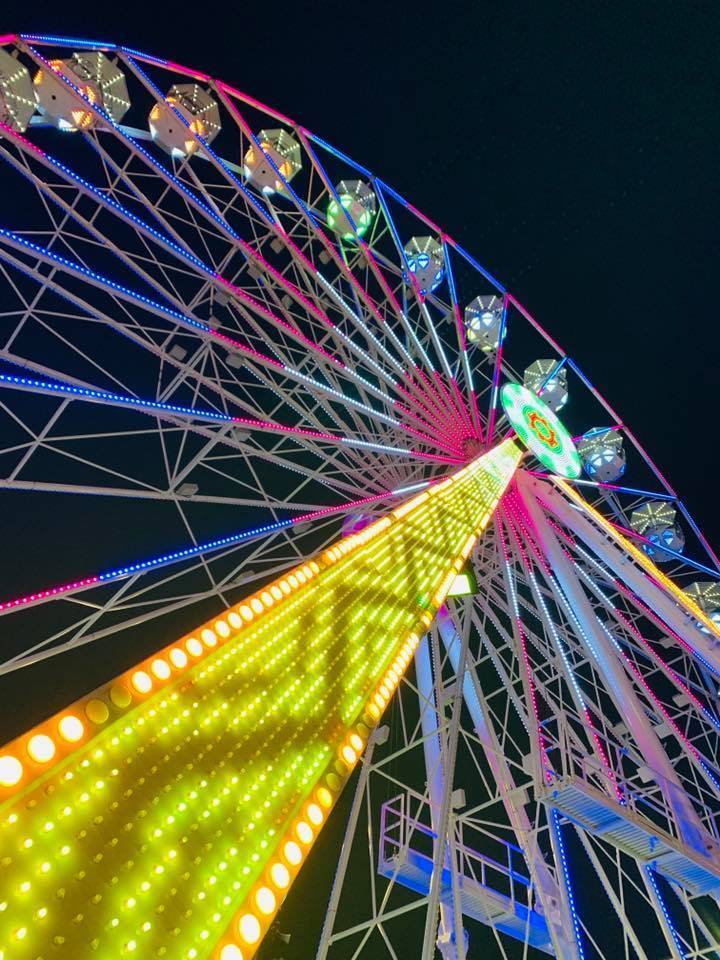 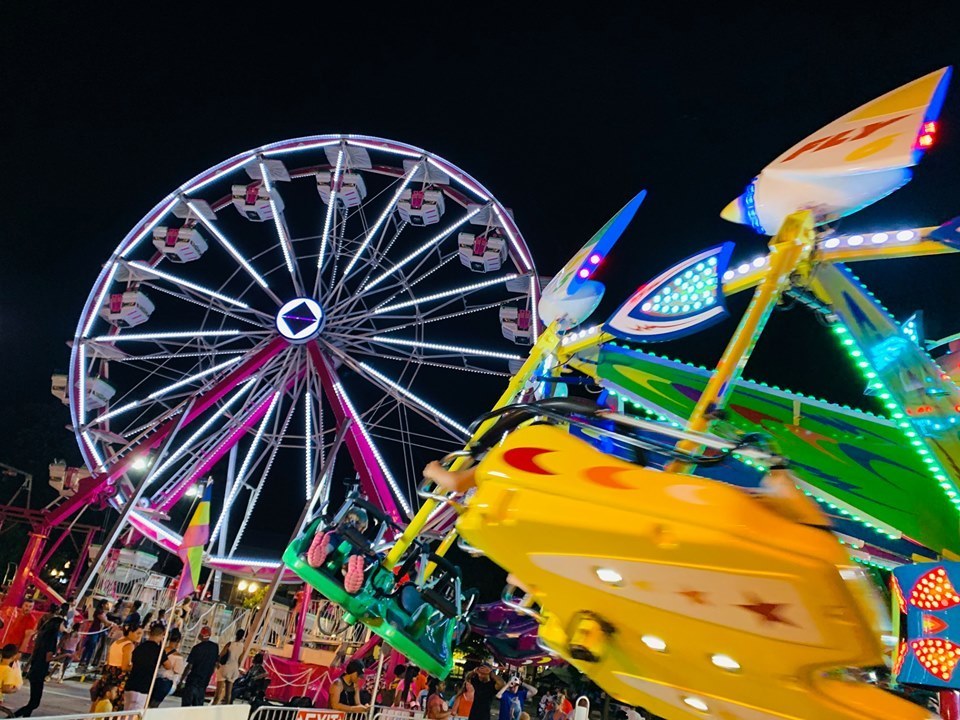 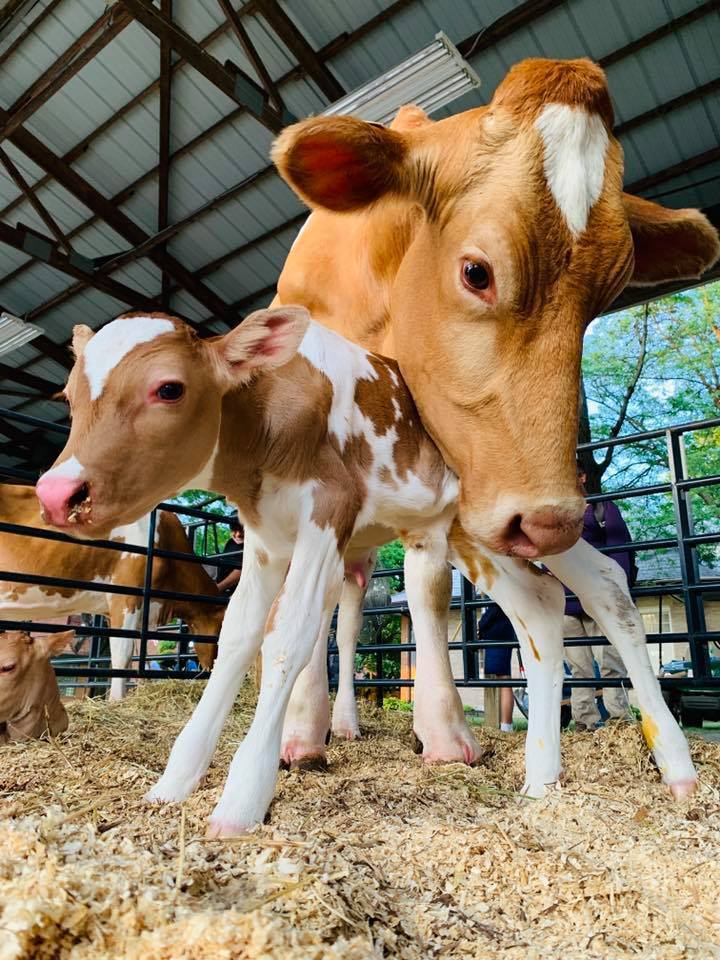 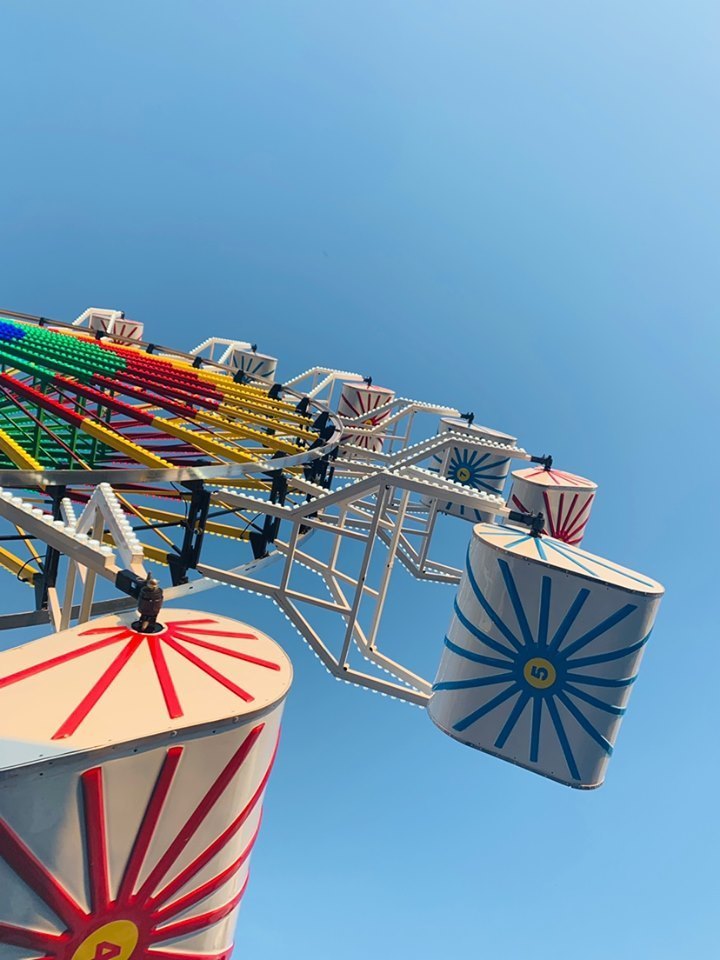