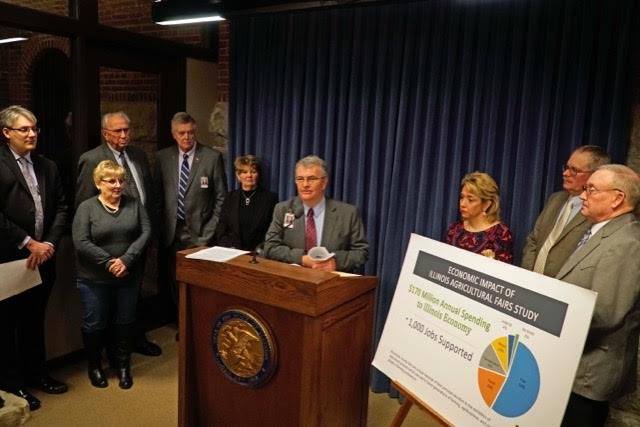 Few things improve the attitude of local and county fairs than a new infusion of governmental financial support. That was exactly was the good news that the annual gathering of the Illinois Association of Agricultural Fairs (IAAF) received, giving them much needed uplift.

Until 2018, Illinois Fairs languished for years with minimal funding, nothing much beyond minimal state support for 4-H prizes and premiums. The state was especially hit hard by the great recession and a series of state budget battles and austere spending policies pushed fair funding off the legislative radar for more than a decade. The tides turned last year with the passing of legislation designated $5 million in grants to county fairs for operational funding.

“We worked very hard to get some restoration of funding, especially in the last two years,” said Bill Jennings, fair manager, Richland County Fair and past president of the IAAF.  “This funding was the major issue at the convention, everybody was talking about it. It allows for rehab and maintenance, but it really comes to fairs without a lot restrictions. Fairs and their fairgrounds can spend it on general maintenance, painting and plumbing, or to pay off existing debt.”

According to Margaret Vaughn, Director of Government Affairs and Lobbyist for the IAAF, “It was a ten year battle to convince the legislature we are part of the solution.”

It didn't help matters that for “two years we had no state budget,” Vaughn added. Every March, the association's membership descends on the state capital to meet with representatives and hold press events. The 2018 Legislation Day received more attention than usual, with fair funding being a perennial legislative issue and the state was in the throes of a heated mid-term election year.

The funding restoration in Illinois is a case study of effective coalition building and a well-armed advocacy arsenal. In 2015, the IAAF released the Economic Impact of Illinois Agricultural Fairs, a study conducted by University of Illinois that found the state's fairs generate $170 million in spending. According to Vaughn, having this study was the key step in making that argument to both the Illinois public and their legislative body. “With that study, people started to listen,” she said. “People forget that Illinois is still a leading agriculture state. In rural areas, there's not a lot of big economic activity than the fair and the fairgrounds, besides agriculture. Our economic argument was made. We have a good rapport with our legislatures.”

Her advice to other fair associations looking for government support? “Invest in a feasibility study and take it to the media. People love their county fairs.”

Having won a hard-fought legislative victory, Jennings expect a robust turnout for the 2019 lobbying day this March, the planning of which was also discussed at the convention. Typically the event brings more than 90 Illinois fair professionals to the capital. There will be many new officeholders for the coalition to impress. There are 45 new legislators in Illinois plus a new Governor, J. B. Pritzker, a Democrat; one of his first appointments was a new Director of Agriculture, John Sullivan, a former state senator “who comes from a farm family and has always been a big supporter of fairs,” said Jennings. “We've met with him and we all let out a deep breath. He understands fairs and we're looking forward to working with him.”

The IAAF represents 104 fairs, 11 of which are classified as fairs & expositions. Approximately 3,800 attended what was touted as the 109th IAAF convention – an increase over the 2018 convention and the gathered crowd was noticeably more optimistic. “Fairs were really watching their budgets in the past five, six years,” Jennings. “Without the funding, fairs weren't able to make any changes, they were not sure if they could survive without the funding. The attitude was very different now, the fear dried up. Last year was a turning point for a lot of fairs.”

He pointed out that last year saw the retirement of a number of fair board members, which meant an infusion of younger professionals, reversing the graying of the fair industry plaguing so many states. “We had a lot of junior fair people, a lot of young blood coming in, and they are bringing in many new ideas. We had various round table discussions which had some of the highest attendance.”

One particularly well-attended seminar was Grant Writing 101, he added.

A younger, less impoverished regional fair industry did not go unnoticed by other industry segments. Jennings said the fair associates membership had increased by 20 members; the annual trade show exhibition floor expanded to 104 booths, requiring a rearranged layout that accessed additional meeting rooms in order to accommodate this new cohort of suppliers, most of whom were first time IAAF exhibitors.

The most discernable trend among new exhibitors was new additions to the edutainment category. “There was a butterfly group and a display about dinosaurs that were new, and a lot of new fun and educational programs, but with a new aspect to what they were doing,” he said.

The exhibitors also included “two or three new promoters, who were working with fairs to route acts through the state. Our entertainment showcase was bigger, it would have been even bigger but there was a snowstorm on Saturday night that hurt attendance.”

There was an unexpected uptick in the equestrian spectacle sport category. According to Jennings, willing to brave the Midwestern snow were “three men who are starting a new independent rodeo company that was surprising. A lot of fairs seemed very interested.”

In other convention news, Alexi Bladel, 19, of the Winnebago County Fair, was crowned the 60th Miss Illinois County Fair Queen at the Illinois County Fair Queen Pageant. Bladel will be a summer employee of the Department of Agriculture. She will travel to about 30 county fairs, and will be the official hostess of the Illinois State Fair in Springfield and the DuQuoin State Fair.  “This was a dream come true,” said Bladel. “My mom was a queen in Vermillion County and competed at state and I've always wanted to do this. I hope to be an ambassador and promote agriculture.”