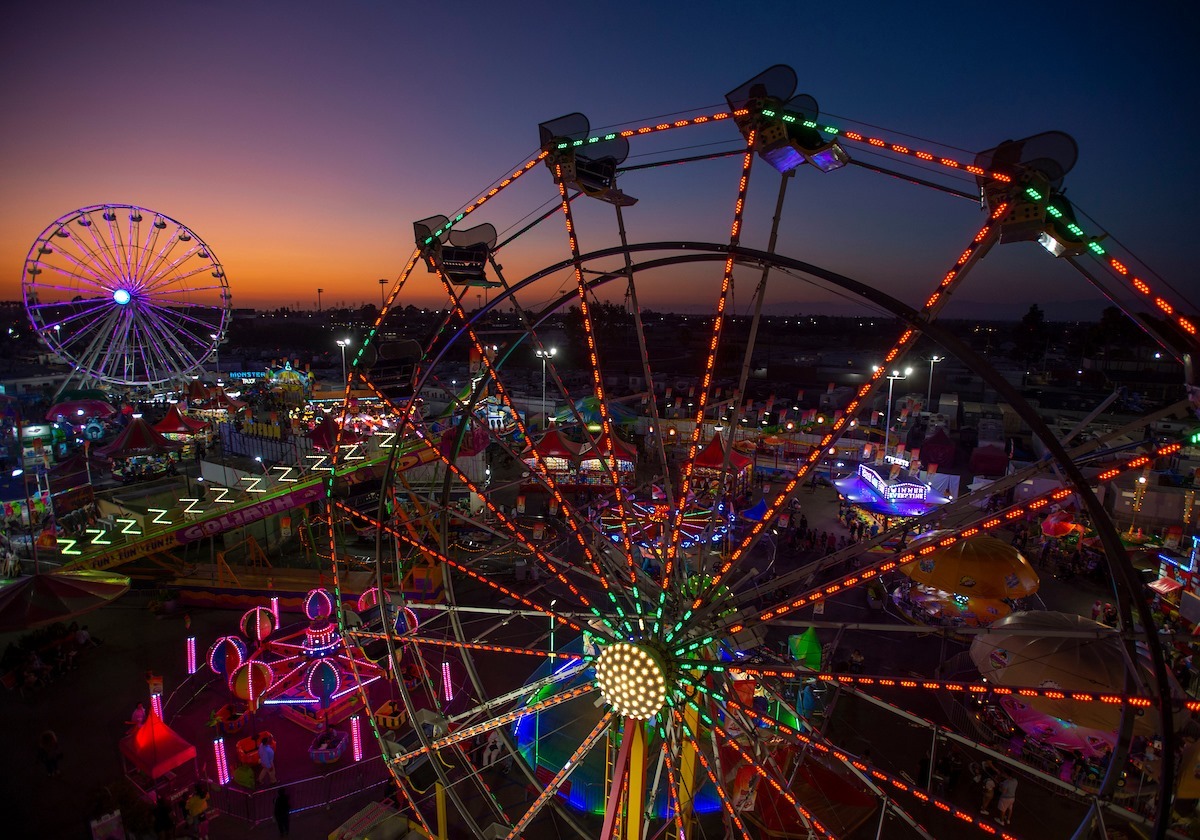 Rising up to fill the gap left by the Los Angeles County Fair, which is waiting until May 2022 to make its return, the State Fair Santa Anita Park is making its debut at the Arcadia racetrack campus from July 29 to August 22nd, running every Thursday through Sunday. The racetrack park ran a carnival on Memorial Day weekend that drew a strong crowd, in addition to holding corgi races and offering $1 days hot dogs, sodas, and beers.

The full fair features the slogan “Come Together.” Located on the campus of the Santa Anita Race Park in There is a full schedule of nightly live music featuring a myriad of tribute bands playing music by artists such as Led Zeppelin, Duran Duran, Guns N' Roses, the Beatles, Van Halen, Kenny Chensey and Queen, as well as original-music performers including La Sonora Dinamita.

General admission entry-only tickets are $10-$12 for adults; seniors and youth are $7. For the carnival, the daily unlimited ride packages start at $40 per person with the purchase of a general admission ticket. A season pass is $250 for a single person and $500 for a family of four and includes unlimited rides and games. The fair will utilize COVID-safe digital ticketing and currency that can be made either through mobile apps or loaded onto an RFID wristband. Parking onsite at Santa Anita is also paid in advance. There will also be an early bird special of free admission with the purchase of an Unlimited Ride wristband valid for 5 hours, an offer available only in limited quantity. The fair will run from 11 a.m. to 10 p.m. Thursday-Sunday.

The new fair is jumping into the void created by the considerably larger and renowned Los Angeles County Fair waiting to reopen on new dates in May 2022. That decision was in part based on rising temperatures at the Pomona fairgrounds; Santa Anita, located in Arcadia, Calif. could be steamy itself in late July.

The fair's PR team has announced that it will celebrate the varied “landscapes and cultures of Los Angeles” and the city's diversity; it will also have a focus on ecology, using 90-100% recyclable food and beverage containers instead of Styrofoam or plastic. The organizers are also planning on including food stands with local and organic focus and providing refillable water stations.

Along with food, music, and carnival rides, there will also be midway games, “adult beverage sampling,” a separate children's activity area, many product vendors, and a “social media stage,” according to State Fair Entertainment founder Ron Severance.

Severance is no stranger to putting on events, having worked in food and beverage management and produced, managed or operated a variety of large music festivals, shows and aspects of major NFL events and disaster relief fund-raisers.  “Our mission is to bring an affordable fair with world-class attractions and entertainment experiences to Los Angeles,” he says, “while leaving the smallest carbon footprint possible.”

Meanwhile, like the Los Angeles County Fair, the California State Fair, a late summer staple in Sacramento, is postponed, if not yet canceled again this year. The fairgrounds currently hosts COVID vaccination and testing  into September. The site has vaccinated over a quarter-million and tested tens of thousands according to officials.

Rick Pickering, the CEO of Cal Expo explains “There is definitely a light at the end of the tunnel, and I am proud that Cal Expo has been able to play such an important role during this difficult time.” It remains possible that a trimmed version of the fair will run later in the year.

A slimmed-down version of the fair is one of the possibilities that will be discussed later in the year, Cal Expo officials said.

Despite no scheduled large-scale fair, on June 12th, Sacramento's largest family waterpark, located at the Cal Expo grounds, reopened. Raging Waters offers 25 different attractions including slides, a lazy river, and a wave pool. And September 18th, Cal Expo's Miller Lite Grandstand will present a major country music festival featuring Little Big Town, among many other acts. All the same, Cal Expo is once again unable to generate operating dollars from the fair.

California remains the state with smallest number of fairs returning this year, although some county fairs have recently run, such as the San Bernadino County Fair. The Orange County Fair near Los Angeles will be opening July 16 through August 15. Although the event will be scaled down, it will include a carnival operated by RCS, music, shopping options, and fair food. Ticket prices are $12-14 for general admission. The Hangar will offer tribute bands with tickets live for $17.50; ticketed streaming will also be available for those still staying home. Big name concerts will be ticketed at the fairgrounds' Pacific Amphitheater, including Colbie Caillat. Carnival tickets are $20 for 40 tickets; no unlimited ride wristbands are being sold this year due to pandemic safety guidelines. The fair's slogan is “Time for Fun.”

The Placer County Fair in Northern California will run for four days, June 24-June 27 with a just-revealed slogan expressing the hope of “Mooving Forward Together.” Located in Roseville, the fairgrounds will be home to Wold Amusement's carnival rides and games. Carnival wristbands are $35.  Fair admission is $8 for adults, $4 for youth, $5 for seniors. Family fun zone provides free activities for kids including crafts and bouncers. Livestock, exhibits, and fair food will all be back in full; concerts include tribute band ZZ Chops and acts ranging from Maya to Moonshine Crazy. 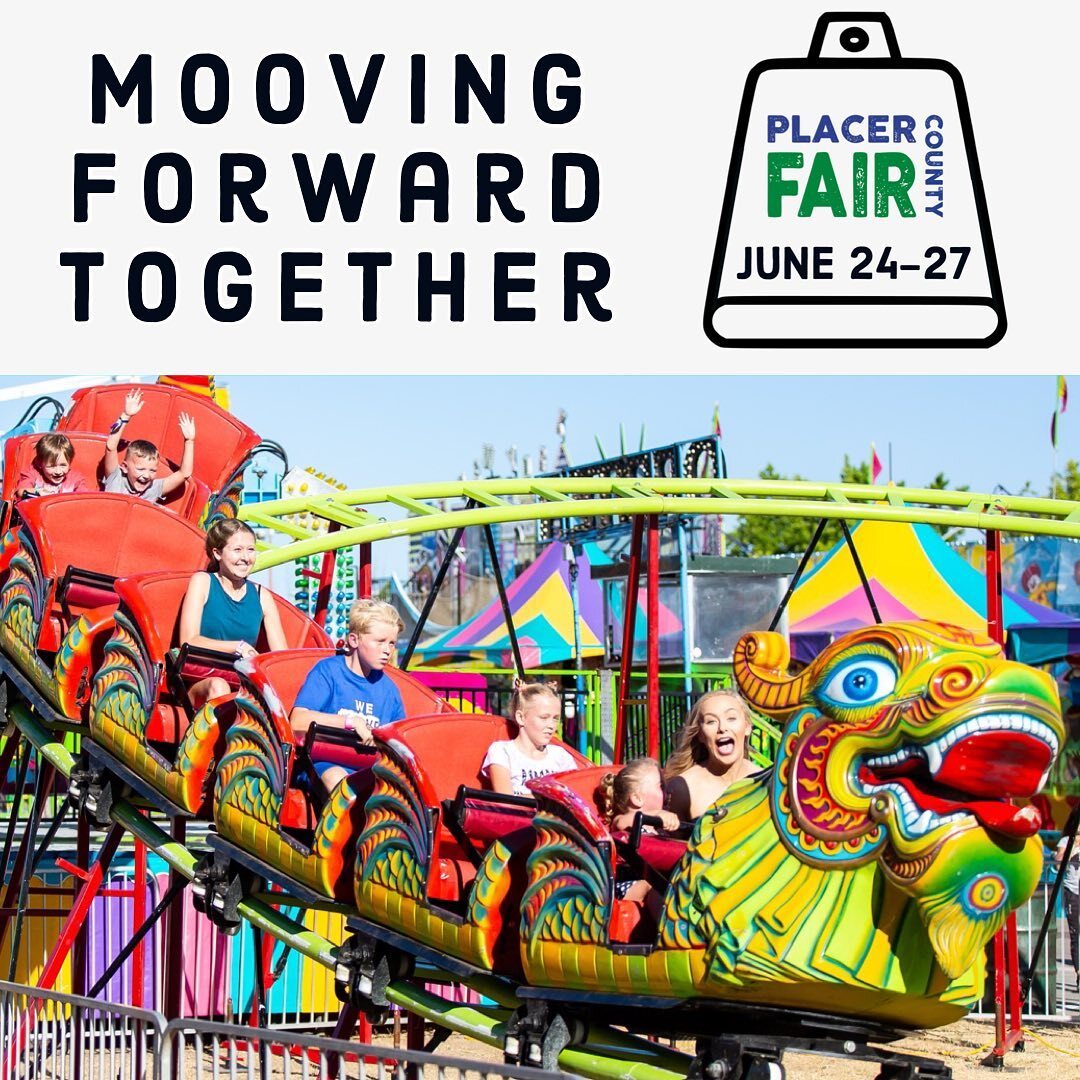 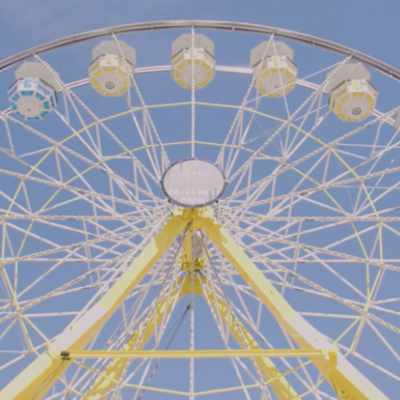