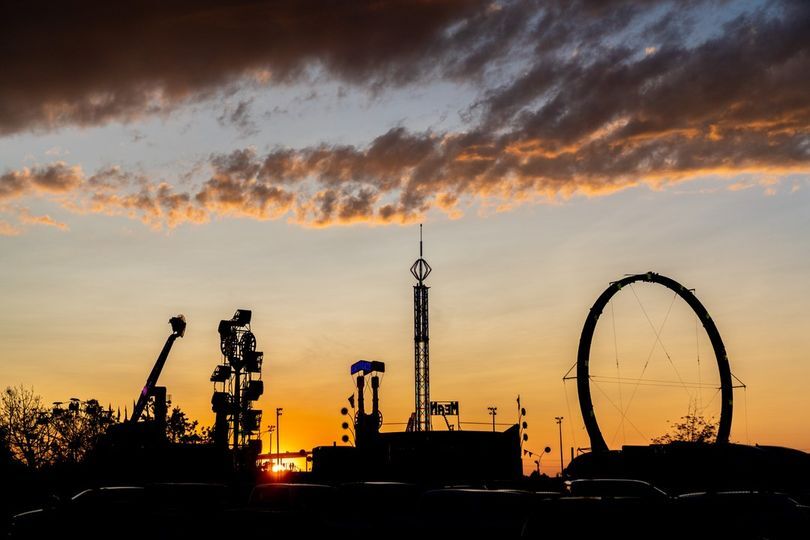 The Sun Sets over the Big Sky Fair Midway
The fair, located in Bozeman, MT, saw a 40% increase in attendance over 2019.

The Montana State Fair returned to Great Falls in 2021, celebrating its 90th anniversary with the slogans “It's all good in the 406” The Mighty Thomas Carnival, returning for its 27th year had increased revenue their year, but the attendance count has not yet come in. Held at Montana Expo Park, July 30th through August 7th, general admission for adults was $8; for ages 6-17 and seniors over age 60, $5; and under age 5, no charge. There was also a Monday-Friday lunch special of $4 available, as well as an “Exclusive Package” that included fair gate admission, a $5 food coupon, and a night show ticket. Package options ranged from $22-54.

From an antique sock knitting demonstration to a cherry-seed spitting concert, the fair had plenty of fun events to offer along with the carnival. You could milk a goat, enjoy a “Purple and Gold” food truck fruit, a coconut and acai creation, bourbon chicken skewers, foot long corn dogs, frozen chocolate bananas, or a dish featuring Bac-on Food – bacon covered hot dog anyone — or perhaps a pickle stuffed hot dog from the Top Notch Cafe? The 4-H ice cream stand inside the Livestock Pavilion was another big hit.

Equally busy were horse racing events and the Big Sky Pro Rodeo, a part of the pro rodeo circuit, which ran for four nights. Rodeo admission was $13 for ages 12 and up; $7 for ages 3-12; with reserved seating for $21.00.

The Zipper was among the popular carnival attractions, as was the  Century Wheel. Also a hit: The Star Tower, a high swing ride with its expansive fair views from a 90-foot tall swing ride.

The City-County Health Department recommended mask wearing and there were multiple vaccination sites available throughout the fair as well. Pre-fair, the first 1000 to receive vaccines received a free carnival ride wristband. 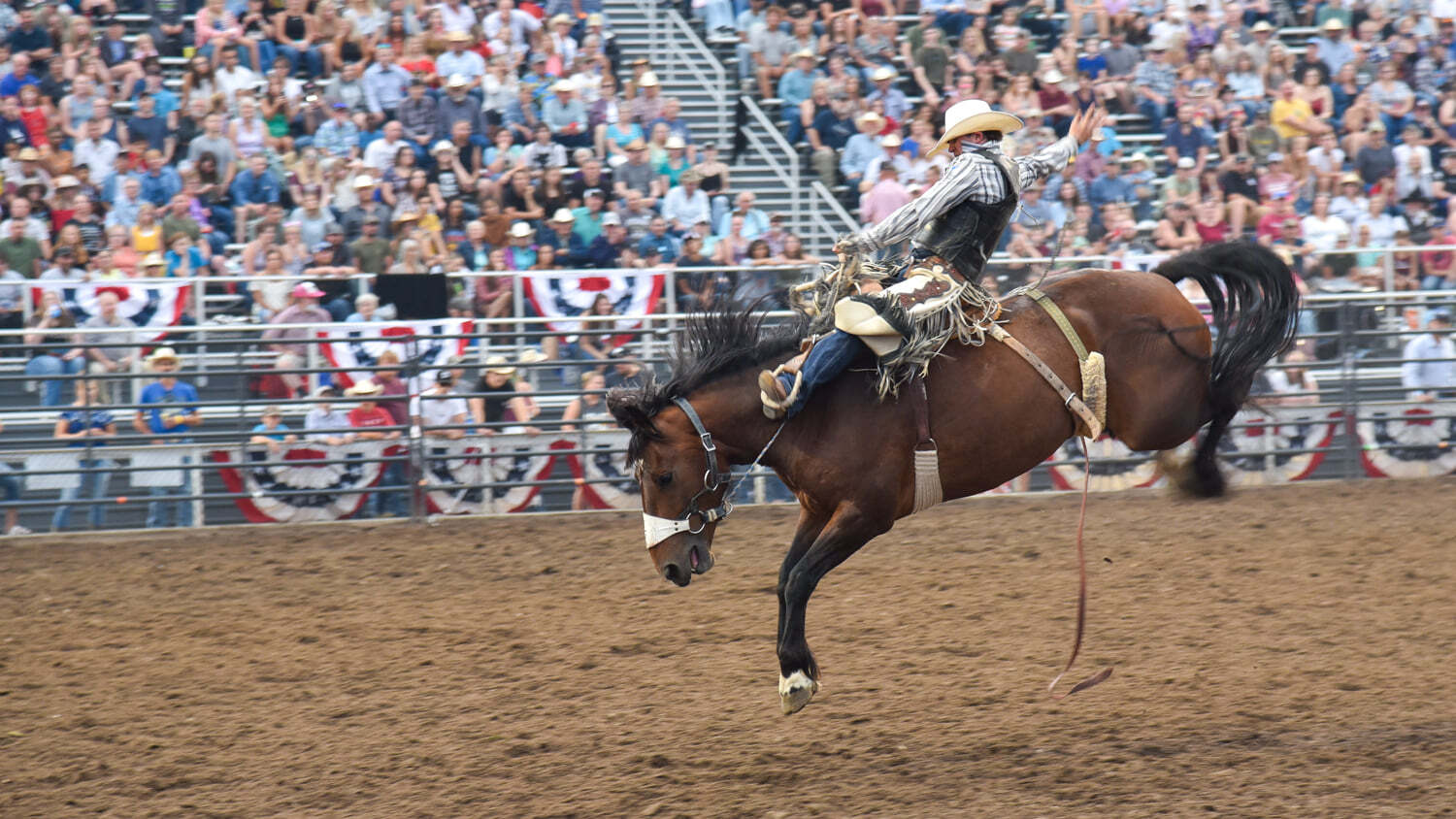 
Elsewhere in the state, the Big Sky Country State Fair had a record-breaking attendance of over 57,000 in Bozeman, at the Gallatin County Fairgrounds, which was a 40-percent increase from 2019. The fair ran July 21 through July 25. Concerts brought in nearly 9,000 attendees, which was 55% more than in 2019. Like the Montana State Fair, the Big Sky Country State Fair did not run in 2020.


And here, too, there was a mobile vaccination clinic on offer.

According to the fair's general manager, Dennis Voeller, “The Big Sky Country State Fair was rewarded for new programming efforts this year with a record response … [which] will allow staff to pursue an even better program for 2022.”

The fair's top attractions included concerts, animals in the livestock barns, the Bozeman Roundup Ranch Rodeo and free stage entertainment. Concerts included Nelly with guest Carly Pearce, Granger Smith with Kolby Cooper, and Trace Adkins with Parmalee. The new Silver Bullet Stage attracted large crowds, but then so did the entire fair, with a record breaking single-day attendance of 14,500 on opening day.

People were anxious to enjoy the fair after a socially distanced, fair-less 2020.

The craving for fun was behind the influx, along with the national-talent performers taking concert slots. “I think it's a willingness to go out and get involved in some of the things you couldn't for a long, long time,” Voeller relates. 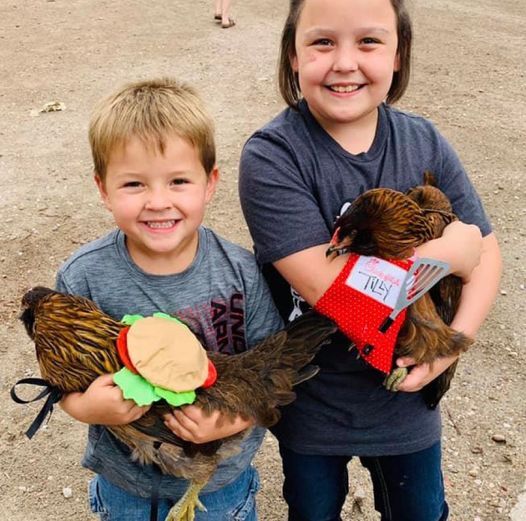 There were also new food selections and fair attractions; Nelly's performance was the biggest draw, Voeller says, adding “It's a bit overwhelming and humbling to see the response that we got, not everybody comes by their dollars so easy…to be worthy of them is a bit humbling.”

The midway, from North Star Amusements also drew big crowds according to carnival operators. The ride purveyors did especially well this year with their newest addition: The Frenzy, a pendulum-style ride that offers thrills up to 60-feet in the air at 3.5 gs of acceleration. North Star is looking to expand its offerings even more next year. 21 rides were on site for the fair's 2021 edition.

Among other fair activities, kids enjoyed the Chicken Chase, where kids in pursuit of their feathered friends were offered the chance the keep the chicken they caught. Octane Addictions offered frenzied cycle racing fun, and an extreme dog performance captivated the capacity crowd.

Revenue for both carnival and the fair itself increased, and Voeller hopes to maintain attendance numbers as strong as those for this year, come 2022.

In short, for fairs all across the Big Sky State, attendees are ready to get back to carnival rides, fun food, livestock exhibitions and more.

The Sun Sets over the Big Sky Fair Midway