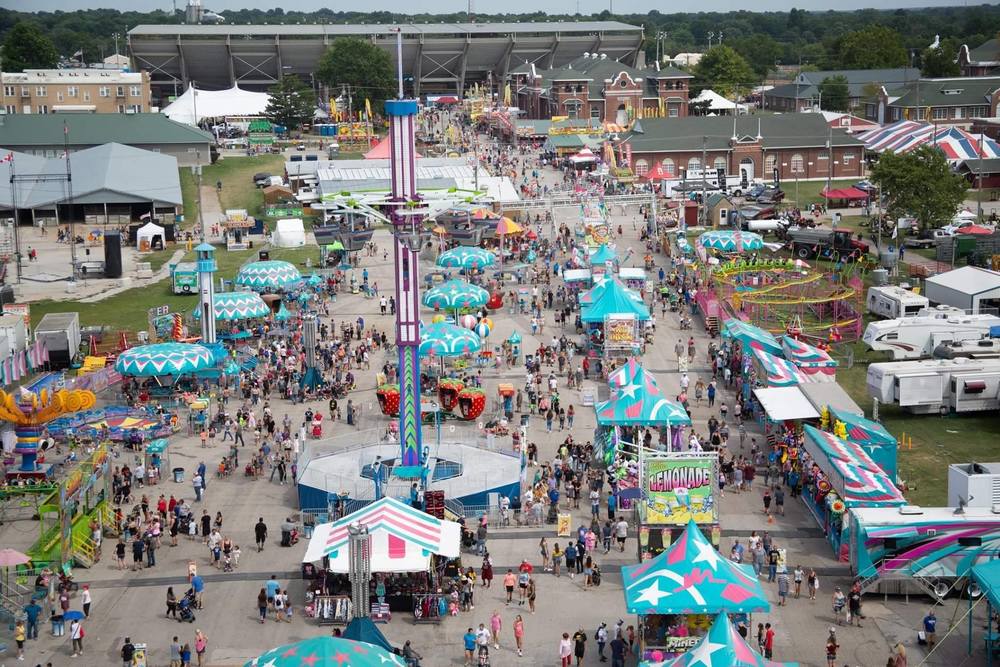 Rain impacted the Missouri State Fair even though technically none fell on any actual day of the fair. When storms came they came at night, three thunderstorms that muddied up some of the grounds and damaged a few tents. But it wasn’t the rain at the fair that negatively impacted the Missouri State Fair, it was the massive flooding throughout the year.

Like many fairs and perhaps even more than most, the Missouri State Fair is agricultural based. With annual statewide revenues of $89 billion, farming is the biggest industry in the state. “Biggest by far,” said Mark Wolfe, Fair Director. “There’s no second even. The fair is the biggest promotion for the ag industry, it is the largest showcase for the industry.”

The fair itself is 117 years old, and generations of farm families have attended this event, participating in competitions for the highest quality hay or who can produce the most bushels per acre or raise prize winning chickens, cows, sheep and other livestock. Most start with 4-H and FFA programs and continue throughout their agricultural careers. Because of this agriculture emphasis, the Missouri State Fair is renowned throughout the heartland for its exhibition of the latest in farming technology and techniques, with in-depth demonstrations rare for many other fairs.

“For more than a century, the Missouri State Fair has been second to none, showcasing the best of Missouri agriculture,” said Governor Mike Parson . “We are proud it has stayed focused on our state’s number one industry year after year. Even with this year’s strong storms and severe flooding, our farmers and ranchers have remained committed to sustaining Missouri’s agricultural roots and keeping the industry strong for future generations.”

The reality is that 2019 has not been farm friendly for Missouri and the fair suffered along with the majority of its constituency. Tariff wars and falling prices have added insult to injury, the injury being the seemingly endless months of monsoon this year.

?“Agriculture economy in the state has not been ideal with the flooding that occurred,” said Wolfe. “The Missouri State Emergency Management Agency recently released that an estimated 1.2 million acres of farmland were flooded in Missouri this year. This likely took its toll on our exhibitors who were dealing with these issues rather than preparing their livestock or crops to enter at the Fair this year.”

More than 4,000 young, soon-to-be agriculture professionals, participated in the State Fair with building demonstrations and exhibits and showing livestock. 27,245 livestock and competitive entries were exhibited. “The tradition of the fair is our exhibitors,” said Wolfe. “The youth and exhibitors spend a lot of time working on their exhibits and livestock getting them ready. But with the flooding and the tariffs, they didn’t have as much money to spend, and instead ofcoming for the whole fair, they only stayed a two or three days and went home instead.”

?But, with the problems in the industry, many farm families, especially those who lost this year’s crops due to flooding, either were unable to attend, or came for fewer days than last year.Attendance dropped about 3,000, reaching 337,112.  But there were some silver linings in at least the metaphorical black clouds. “Our second Thursday and Friday did have some higher days than they have in the past recent years,” he said.

The decline was noticeable, but also manageable and not unanticipated.. “It was kind of expected considering the downturn the ag industry has suffered with the flooding and the tariffs,” said Wolfe. “It’s looking like revenues were down approximately 3 percent from last year.  We will have to make some adjustments for next year, but nothing very significant .

?The fair’s advertising budget of  approximately $575,000, which includes both purchased advertising and trades, was about the same as 2018. The media mix also remained relatively unchanged:  Print: 30 percent ; Radio: 35 percent ; Digital: 7.5percent ; TV: 10.5 percent ; and Outdoor: 5 percent .

Facebook, Twitter and Instagram have been “wonderful ways to keep in touch with our customers.,” said Wolfe. “Targeted social media advertising continues to be a focus for us as well as boosting certain posts for maximized exposure. Our social media group operated with both proactive and reactive teams, to tackle the increasing demands of social media to reach and react to the public. Facebook Lives were utilized in an effort to keep fairgoers aware of what was going on at the Fair in real-time.”

?The new marketing campaign helped overcome some of the attendance deficit and other shortfalls due to the troubled agriculture industry. Even if spending was down overall, midway revenue showed an increase of 8.6 percent, Wade Shows provided the midway, which boasted 10 new rides this year.

?Another bright spot was a concert lineup. While no shows sold out, the grandstand lineup featured an ideal fair mix of country and classic rock. Dwight Yoakam With King Leg;  The Struts With White Reaper; Brantley Gilbert With Jobe Fortner; Chicks With Hits Featuring Terri Clark, Pam Tillis And Suzy Bogguss; Foreigner With Night Ranger; Tyler Childers With Brent Cobb; For King & Country With Matt Maher ; And Brothers Osborne With Ashley Mcbryde.

Rounding out the grandstand series were tractor pulls and other motor sports. According to Wolfe, the Foreigner show was the biggest seller, followed by Brantley Gilbert with Jobe Fortner and Brothers Osborne with Ashley McBryde.

Turned out, 2019 proved to be more of a buyer’s market. “We were able to book earlier for this fair,” said Wolfe.  “We were able to meet their asking price, so prices didn’t go up last year. The routing is so important, and we had quite a bit of luck, which is not always the case. We’re still committed to headline entertainment. We know what sells in Missouri. The difference from the year before is that we had the contracts done earlier, which has not been the case so far for next year’s fair.”

?Food & Beverage likewise proved to be a highpoint of the fair. Wolfe stated that 399 contracts were issued for concessionaire/vendor space in 2019. Due to the flat-fee contracts, sales figures were not available. The hot new food item was the Dilly Dog, a cored out dill pickle with a hot dog inside covered with corn dog batter and deep fried. “Everybody was talking about the Dilly Dog.”

?The Dilly Dog was not the only Corn Dog news at the Missouri State Fair. The fair hosted its first Corn Dog Eating contest, sponsored by two different corn dog vendors. “They’re competitors who have been at the fair for years, but they co-sponsored the contest,” said Wolfe. “It was unique, people love the food eating contests and it got people talking about our fair food. It drew a couple of radio stations who covered the contest.”

Whether they’re variations of the corn dog standard or eating contests that draw attention, food is never far from center stage at any fair. But food at the 2019 Missouri State Fair was a highpoint as the fair found a way to use food at the fair to fulfill its mission of promoting the state’s farmers. A partnership between the Missouri Department of Agriculture, the University of Central Missouri, and Missouri Grown, an association that promotes the state’s produce and livestock resulted in the Missouri Grown Bistro, a full-service farm-to-table restaurant in the Taylor Woods Youth Building that served breakfast, lunch and dinner. “It was not what your normally would see for food at the fair,” said Wolfe. “It was quality food, served in restaurant style and everything they served was grown or raised in our state. People really latched on it. It showed how important the agriculture industry is to everyday lives in a new way.”