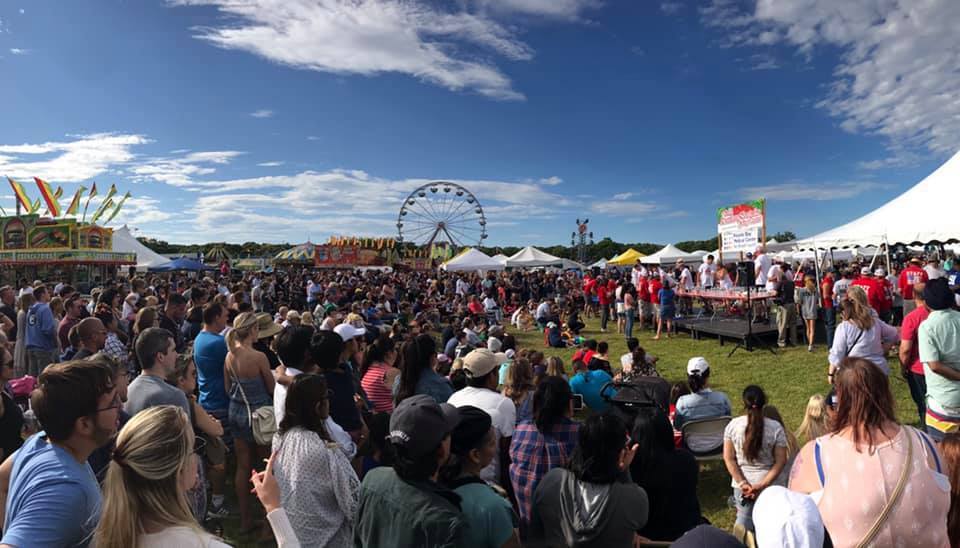 For most workers, 65 is the traditional age of retirement. For the Mattituck Lions Club Annual Strawberry Festival the 65th annual event shows no signs of calling it quits. The Father’s Day weekend fair features a pre-opening day. Known as Hulling Night, this soft opening featuring thousands of community volunteers who turnout to help hull approximately 100,000 of the festival’s titular fruit used to make the shortcake and strawberry smoothies AKA alcohol- free daiquiris. The carnival and food court are also open on Hulling Night, with special Preview Pricing discounts.

But Hulling night turned out to be a damp affair.  “Opening day was rain,” said Rick Reithoffer  of Reithoffer Shows Inc. “We got the night in, but basically lost the whole day. People didn’t plan to come out when they saw the rain.”

Record Midway
But hope springs eternal and as spring drew to a close, the monsoon like conditions that plagued the Northeast finally faded away. The sun came out and ideal temperatures prevailed. “Friday and Saturday and Sunday were record-breaking days,” said Reithoffer. “We were up considerably, about 25 percent higher than last year. It was the biggest year we ever had.”

Reithoffer Shows have been providing the midway for this Long Island, New York event for 13 years.  The midway featured 25 rides and about 25 food stands – Reithoffer is the only non-strawberry food vendor at the event. The most high profile attraction at this year’s midway was the return of the Zipper, which had been on hiatus for a comprehensive refurbishment – the ride was completely rebuilt then outfitted with a new Denny’s Electronics Light Package, the latest in LED lighting technology. “It is a really fun ride and people loved it,” said Reithoffer.

Other rides that returned to help make for the record breaking year for Reithoffer Shows included the Giant Wheel, Skyflyer and Music Express. “We a few other different rides,” he said. “We had a different ride lineup this year.”

The company’s main promotion were a pay-one price discount and a Father’s Day special – all father’s ride for free. “That’s a lot of fun, with the fathers riding with their kids.” The fair itself sweetens the enticement for dad spending a day with family at the celebration of everything strawberry by offering free admission to all fathers on Father’s Day, the concluding Sunday of the fair.

This veteran carnival  professional continues to be impressed with this particular northeastern fair. “It’s the biggest event on Eastern Long Island and when you are out here, you can’t believe you’re in New York, it’s very beautiful country.”

Long Island Outreach
The fair is located in what is known as the North Shore of Long Island. As opposed to the South Shore, home to the Hamptons, a summer resort town of the rich and famous, the North shore still has a thriving farming community as well as being an area of population growth of young families. “The area is growing, the economy is good,” said Reithoffer. “It’s supported by the community and this is the biggest community event in the area. The North Shore really turns out for the fair.”

“We were very pleased with the crowds,” said Rob Nine, spokesman, Mattictuck Lion’s Club Strawberry Festival. “Memorial Day is the unofficial start of the Summer, and out here the summer economy is stronger. Most of the local people who come to the fair come early on Thursday and Friday. They come on Saturday and Sunday too, but that’s when people from all over Long Island and Queens come to the fair. We’ve been around for a while, a lot of publications list us as a top thing to do in Long Island.”

With its agricultural theme and an old time, country fair feel, the strawberry festival has an earned a growing reputation as a regional, cultural event. Nine said that Long Island bloggers, online influencers and other news sources, such as PATH and Bulletin Boards as well as older media, such as newspapers and magazines covering Long Island consistently write about the event, including the festival on the top things to do in Long Island lists. Ironically, the alcohol-free strawberry festival was included on a list made by a wine magazine. “The vineyards are on the south shore, but we got tagged in the article,” said Nine. “It helped to draw people to the fair. People who were just coming to the wineries, now were coming to the strawberry festival.”

Social Media Marketing
In addition to being featured on the  influential lists, television and radio stations also covered the festival. Being a nonprofit organizations, the advertising and marketing budget is constrained to say the least. Aside from digital, one of the largest expenditures is on a print product, the Fun Book which is a product produced Newsday, the renowned, award-winning, Long Island daily newspaper.
A reinvigorated emphasis was placed on social media marketing for the 2019 Mattictuck Lion’s Club Strawberry Festival. “It was important to set up an event page, not just a page for the festival,” said Nine. “With the event page, it was easier for people to add their friends, more than 7,000 responded during the course of the four days.”

Last year, the fair hire a film crew to make professional quality videos spotlighting the various attractions of this small town Americana country fair taking place on suburban Long Islands – the crowning of the Strawberry Festival Queen, daily fireworks display, regional music starts, strawberry shortcake eating competition, etc. – and the clips were used throughout the social media platforms, with special attention paid to which platform reaches whom. “We use Facebook the most, but now it seems to be for Facebook you are reaching an older audience,” said Nine. “With Facebook you are reaching the parents of the kids on Instagram and with Instagram you reach the kids who are in their teens and they’re not coming to the festival with their moms and dads.”

The Lions Club boasts 1.7 million members worldwide, with clubs in more than 190 countries. It is considered one of the largest charitable organizations, with a focus on service to the community.

The Mattituck Lions Club Annual Strawberry Festival is not only the major fundraiser for world famous service organization, but it’s the major economic engine for dozens of charitable organizations throughout the region. “All our proceeds go to charity,” said Nine. “We had one rainy day this year, we had a great weekend, with a steady stream of people coming from all over. It was an ideal festival.”