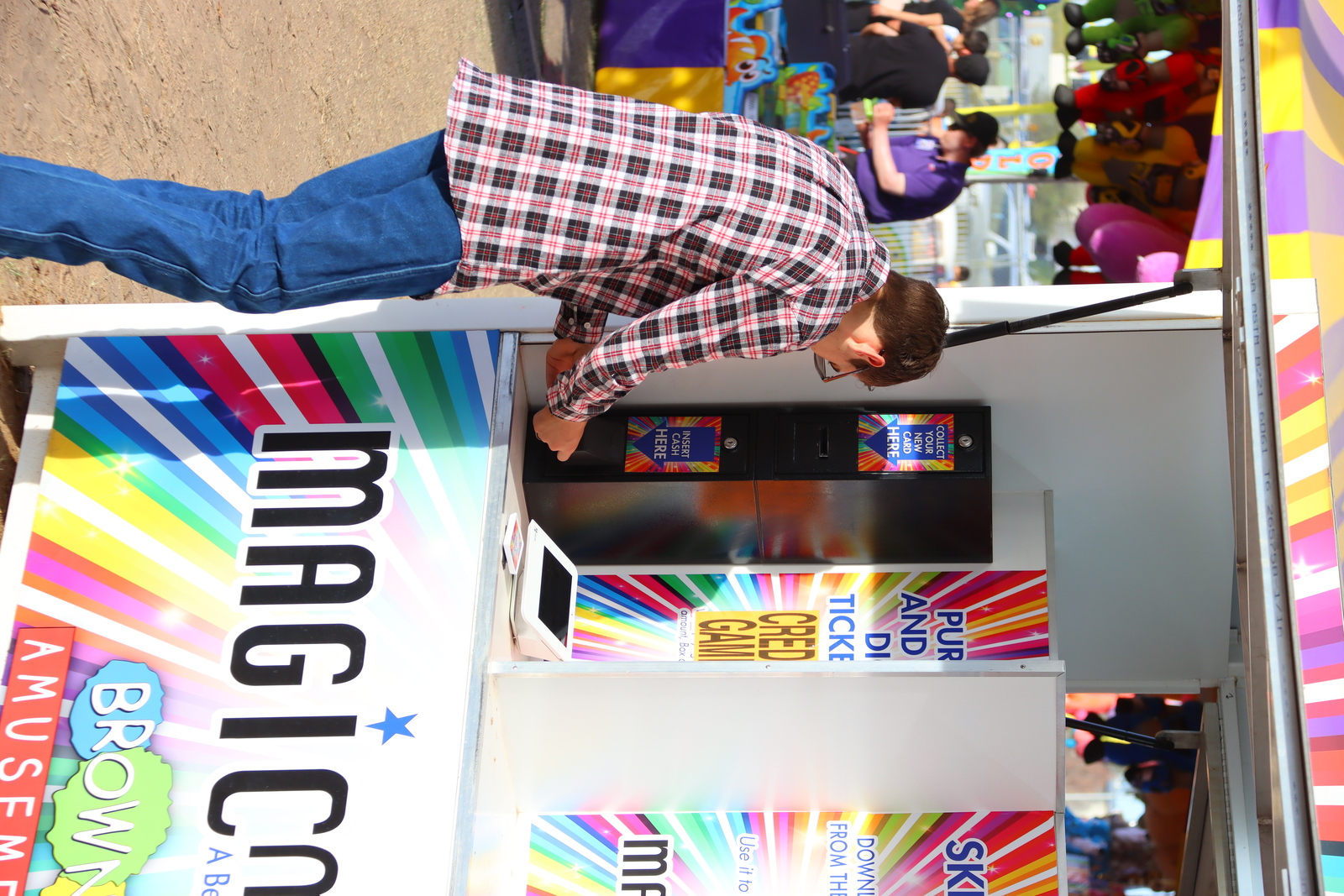 Magic Money provides Cashless Services to Browns Amusements
A customer uses a Magic Money kiosk at the Yuma County Fair (AZ) to purchase credits for games and food on the Browns midway.

Magic Money's Zack Enright announced the company has signed Butler Amusements to use its event management solution software, bringing the total users under the Magic Money umbrella to 13.

“We just completed the Alameda County Fair with them”, said Enright.  “We had 100 kiosks with no live sellers, where usually they have 50 - 60 live sellers at an event of that size”, he added.

Every kiosk takes cash as well as credit cards and sales pricing is built into packages so they do not require change.  The games also worked on the Magic Money system with kiosks between every game and a 4-bank set of kiosks in the front.

Butler is moving on to the California State Fair where there will be 112 points of sale and over 300 scanners for the operation.  Other successful events operated this year with Butler include Indio and Santa Rosa, so the company is off to a very successful roll out. 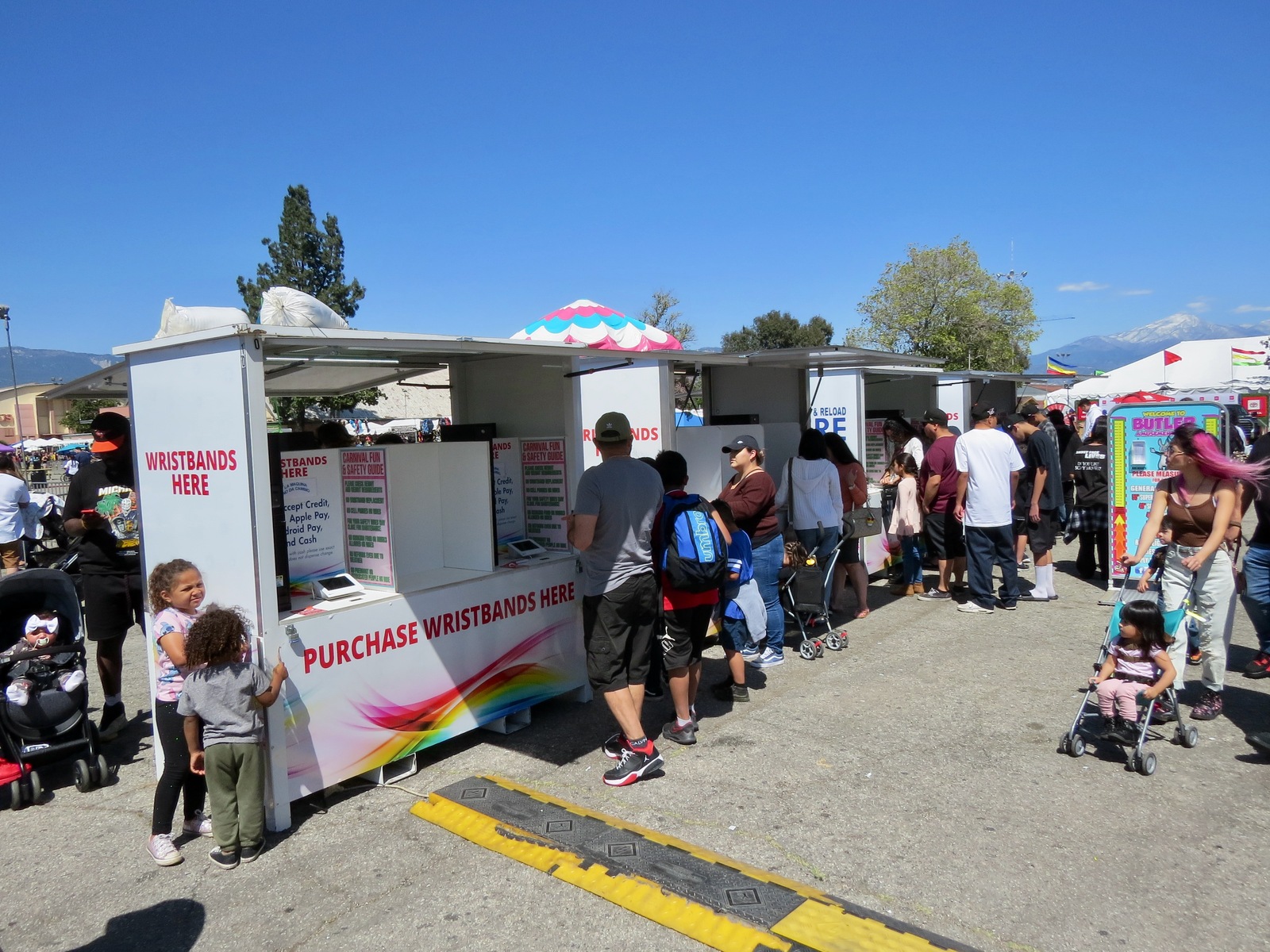 Expansion efforts include adding music festivals, beer festivals and other special events.  The other big opportunity is working directly with the fair to supply a gate solution or even a comprehensive payment solution for the whole event.


“Many fairs are asking our carnival partners to integrate forward to the front gate”, said Enright.   He says Magic Money could be a one stop shop at the gate, for example charging 10 credits to get in plus adding credits for rides, games or food.  Admission packages could also be sold, incorporating other activities such as a grandstand events or special purchase.  Buy One Get One, Senior Day, Student Day and other special admission packages can also be developed.

By working closely with the fairs, it makes the customer experience easier and can gain the Magic Money user some added revenue.  “We help develop a new revenue stream with fees charged to the customer and develop packages that include food credits, free rides, free games etc.  They can all be integrated into one package”. 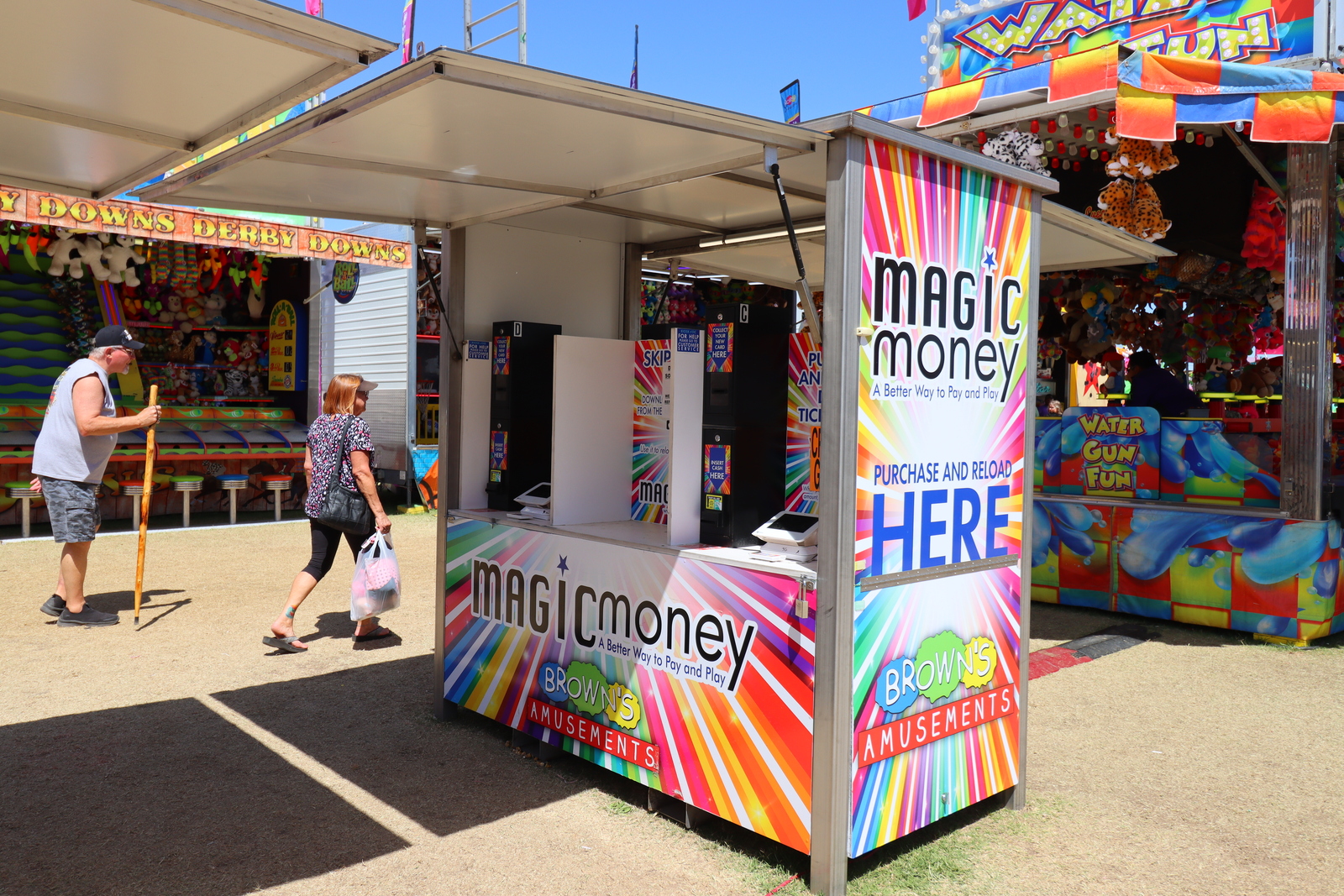 For example, one carnival offered a $100 package that included 2 free rides.  This package quickly became a best seller, bumping to the top of the sales list.

The system uses both wristbands and/or cards depending upon the preference of the customer.  Talley for example, uses cards for the majority of the time, while Butler prefers to use wristbands where they can sell an unlimited ride ticket plus add ride credits.

Enright says the burst of activity for the system can be somewhat attributed to Covid.  At first, the system was being looked at for safety and distancing with sales points, using the machine instead of live interaction with other people, but as the labor market became tighter and tighter, the idea of eliminating a significant amount of the live workforce became very attractive.  “It saved some businesses to be able to set up and use kiosks and not worry about the burden of cash handling and selling”, said Enright.  Using kiosks gets rid of that concern almost completely he said, leaving one less thing, and a big one at that, to worry about.

The people left being required for ticket operations are now “ambassadors" instead of sellers and they can assist guests with questions and transactions when needed.  They project a nice appearance at the front for the entering guest he attests.

Enright says the company now has 700 kiosk stations on the road with his various customers, the most, he believes, of any other management system operating.  He says the system has been proven time and time again at major events and the question for a lot of companies is not “if” anymore but “when” they will be coming online.

“Everyone is headed this way”, said Enright.  He is on track to do 400 events from this year into next and the positive feedback he gets from his customers has been very encouraging.  Enright says he gathers his current users together periodically to get feedback on the system and brainstorm new updates and ideas.  The best ideas are integrated into the new system updates.  This collaborative approach has yielded great results for all involved. 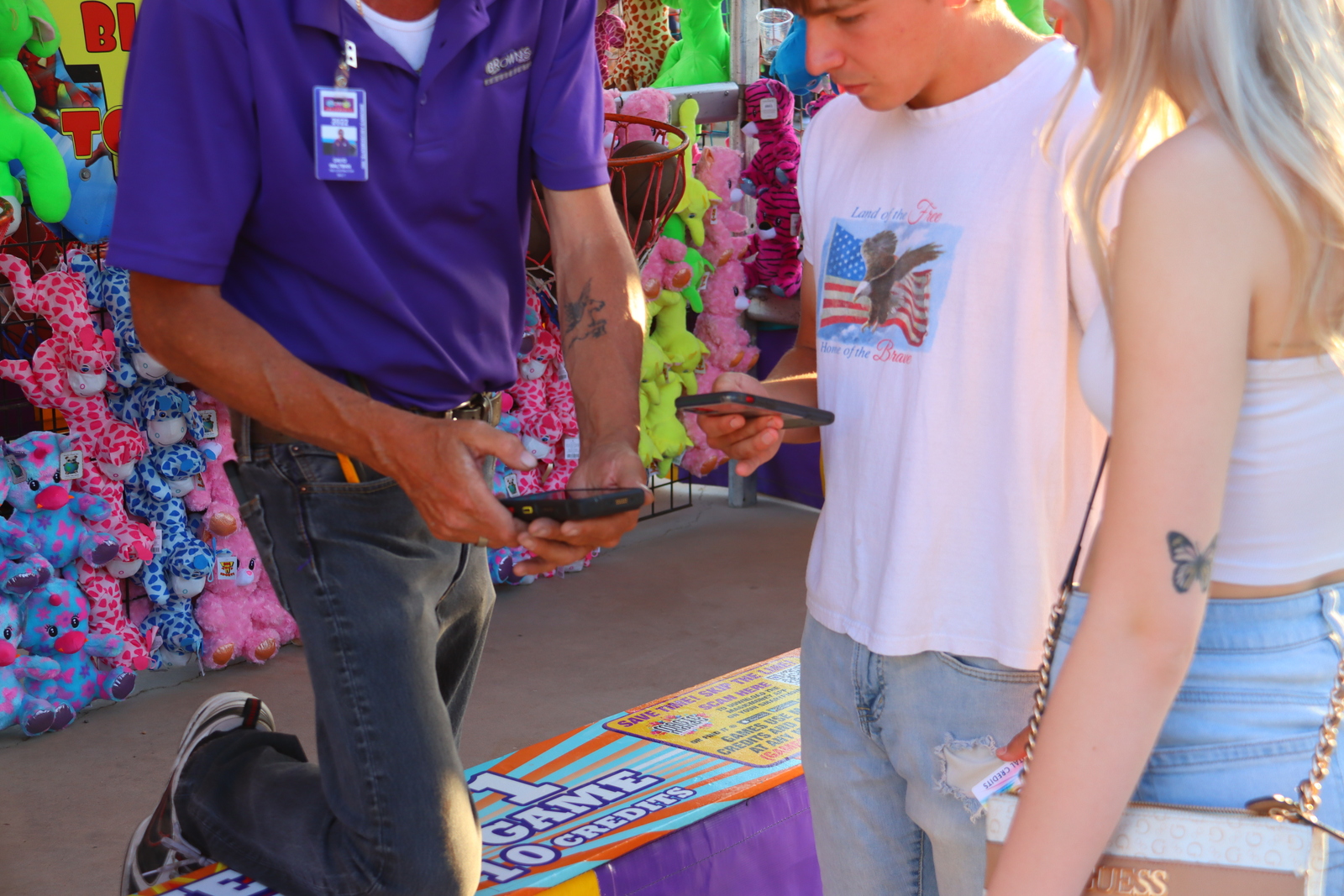 The newest updates include the front gate expansion and other features.  The company will also be expanding into concert and stadium seating soon with a new design update coming on the horizon.

He estimates the software has been updated 70 or 80 times since the initial roll out, providing a tremendous amount of improvements and increased usability for his clients.

Enright bristles at the notion of calling Magic Money a “cashless ticketing system” or similar term.  He sees the software as an event management tool that can help with not just tickets, but also important items like labor, inspections, paying vendors and other important front office management tools.

The company recently spent hundreds of thousand of dollars on new infrastructure and they are going to be rolling out some incentives for more carnivals and events to come on board.  Enright is especially looking to expand eastward as the majority of his client base is currently on the West Coast and he is hoping to expand his client base eastward. 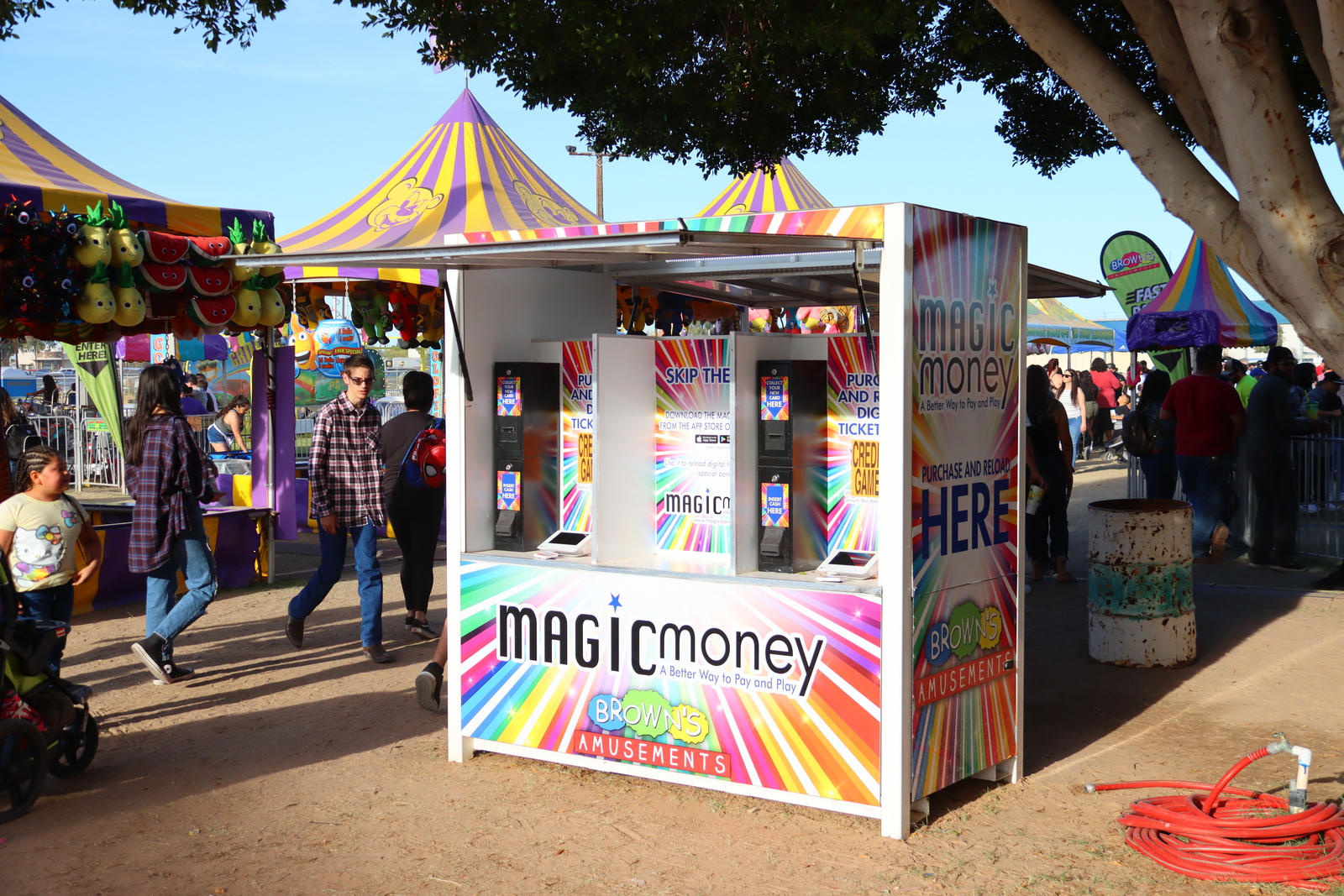 A customer uses a Magic Money kiosk at the Yuma County Fair (AZ) to purchase credits for games and food on the Browns midway.