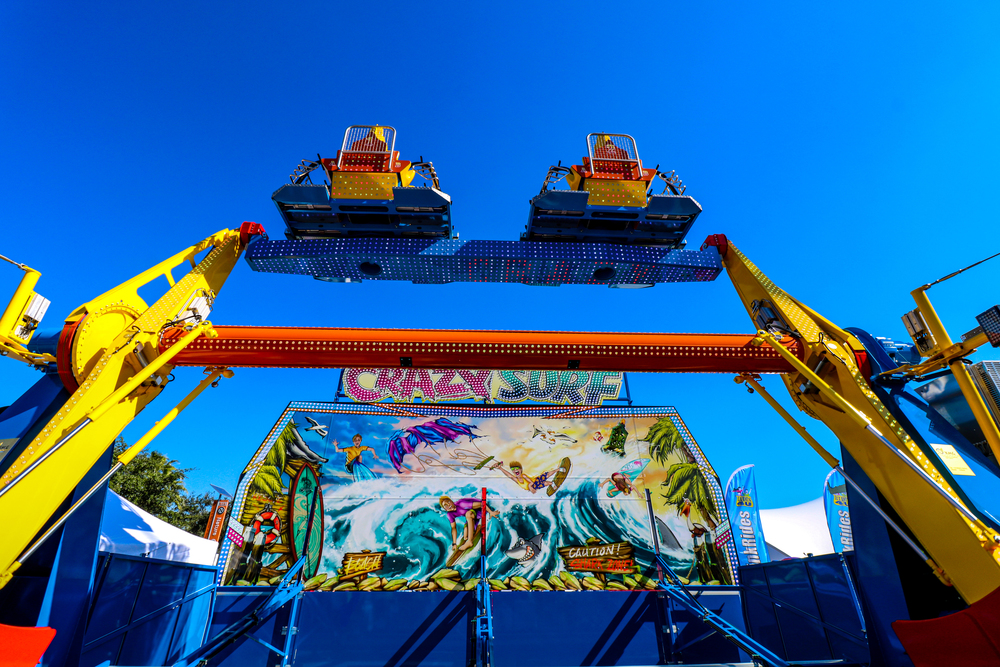 Dutch ride manufacturer KMG had a strong presence at the IAAPA Attractions Expo with an indoor booth and the debut of their new Surf ride outside. The Surf ride made its US debut with Jim Otterbacher's Otterbacher Shows.

In mid-October, Peter Theunisz, KMG's Global Sales Manager visited the Texas State Fair in Dallas, along with Wade Muller, OA Finance's CEO. It was Theunisz's first visit to the Texas State Fair since coming to work with KMG in 2007. He was interested in seeing the impact of Jim Otterbacher's brand new KMG “Crazy Surf” ride which made its debut in Dallas.

When the Texas State Fair opened at 1 pm it was raining slightly but as the clouds disappeared and the sun broke, more and more visitors flooded the midways. Despite a “less-than-ideal” location on the fairgrounds, the Crazy Surf was busy with riders. It was particularly popular among the younger riders, along with their parents, who rode it multiple times said Theunisz.  He reported the ride became even busier in the evening when the innovative LED lighting package could be seen throughout the midway.

Theunisz talked with showmen in Dallas about the Surf Ride and introduced another brand new KMG ride named ”X-Drive”. Several showmen at the Texas State Fair showed interest in this new ride which is a mix of a Speed and an Experience.

The X-Drive riders experience 3 different motions. Rotations on the X- and Y-axis are driven by a motor while the 3rd ”seat flipping” motion is completely free spinning. Set up of the X-Drive takes 4 hours with 3 people, while tear-down takes only 1.5 hours, all without the use of a crane.

The state of the art LED lighting package on the X-Drive is controlled by a Madrix system which will make the LED (RGB) lights function like an LED screen, divided over different parts of the ride. The Madrix system allows the operator to change the lighting patterns in real-time. The ride moves on one triple-axle semi-trailer and the axle settings can be modified according to individual state requirements. The X-Drive footprint is 44.4 x 54.1 feet, stands 59 feet tall and weighs 78,000 lbs.

Theunisz said KMG developed the X-Drive to meet an ongoing demand for thrill rides built on one semi-trailer and “we're one of the very few, if not the only manufacturer who has introduced 3 completely new ride concepts to our extensive portfolio of rides in the last 4 years. The X-Drive ride has received a tremendous response from both mobile ride operators and fixed site amusement parks.” said Theunisz.

The first X- Drive was delivered to a showman in the Netherlands in early September and was an instant success. ”The X-Drive has exceeded our expectations and KMG has received  many inquiries from all over the world for the X-Drive”, said Theusinsz.  “A second deal for an X-Drive has been completed by a German showman and the company currently has two pending deals from US showmen”, he added

Most recently, the first produced X-Drive played a Christmas event in Germany and has garnered widespread media attention.

After their time in Dallas, Theunisz and Muller left Dallas and headed to Raleigh, NC to visit the North Carolina State Fair. ”This is one of the cleanest and prettiest fairs I've visited in years.”  Theunisz said. Most of the rides were provided by Wade Shows and Powers Great American Midways and Theunisz was happy to note the midway contained many KMG rides and 2 Lamberink Wheels (a company Theunisz also represents in the US).  A Freak Out, Speed and Inversion were also present from the KMG side.


Theunisz and Muller spent time with both Corky Powers (PGAM) and Frank Zaitshik (Wade Shows)  and both were filled in about future plans on both carnivals. ”It would be an honor for KMG to have an organization like Powers Great American Midway taking the X-Drive to Raleigh next year.”, Peter said, “It would be a great showcase for both of us.”

In other KMG news, Theunisz announced a new style Move-It ride, commonly known in the US as the Spin Out.  The new version of the ride is lighter than its predecessor, and is electric instead of hydraulic so it is easier to set up and maintain. The ride also features a brilliant LED light display.

Set up takes 2 men just 3 - 4 hours and the ride travels on one semi-trailer.

The first new-version  Move It will debut in October with Mr. Lenzner, a German Showman, and another deal is pending with a US showman.


KMG Service and After Sales


Recently KMG realigned its management structure to insure a better after-sales and service experience for US customers. ”Due to an increasing number of KMG customers and rides in the US, it was necessary to review the lines of communication and responsibilities within the KMG organization. We have made those lines shorter and more direct with better clarity so customers can get in contact the right person immediately,” said Theunisz.

With one call, KMG customers can now get support or schedule service, coordinated through their partners Showmen's Supplies and Semcor in the US.  KMG expanded it's service and maintenance team by adding two additional  factory-authorized technicians. Jonn Schroeder of Semcor Manufacturing, joined Robert Tucker of RideLynx as an additional resource for North American service and support of KMG rides.

Formerly Robby Tucker handled all KMG service but with the popularity of their line of ride increasing, they saw the need to add two more technicians so service calls could be handled quicker.

Theunisz was quick to add that customers could also call him directly in case they are not sure who to contact. “We wanted to go back to a more personal approach and better contact with the customer like we had 5 or 6 years ago. More recently, we've lost some customers simply because KMG was growing faster than we expected and customers felt like they were not heard. As former showmen ourselves we know a direct contact is important.” he said.

”We recognize that the tragedy in Ohio involving the Fire Ball has negatively impacted our customer's businesses all over the world. We have learned from that experience and we don't only want to stand behind our customers, but also next to them. We want to help our customers prevent serious problems in the future by offering better technical service and maintenance support.” said Theunisz.

“In the last 2 years, KMG has worked productively with the OABA, individual OABA board members, ride inspectors and many individual ride and show owners to solve a wide variety of issues that impact the operation of our rides in the US and Canada.  At this time, it seems that most of these have been solved. On behalf of KMG, I want to extend our sincere gratitude to all the people who've helped and supported us and the KMG ride owners in these efforts. Now it is our responsibility to keep that spirit of collaboration going!” said Theunisz.

With the addition of the two new technicians, and in an effort to offer strong maintenance support to its customers, KMG will be offering a new annual check up and maintenance program for its rides.

Each KMG ride will have a list of annual required service that can be completed by factory-authorized technicians, including all required part replacements.  At the end of the annual service and check-up, recommendations will be made on any additional maintenance to be made on the ride for future use.

The annual check-up is standard procedure in Europe, according to Theunisz, and introducing the program in the US will have a positive impact, he believes.  “The check-up will increase safety and maintenance, decrease downtime for the ride and give showmen peace of mind”, Theunisz added.

Theunisz pointed out that resale values also increase in Europe for rides that have the required safety and service records and he believes the same will happen in the US.

The program, Theunisz admits, will be more work for him, but wants his customers to be proud to own their KMG product and know the company stands behind them before, during and especially, after the sale. 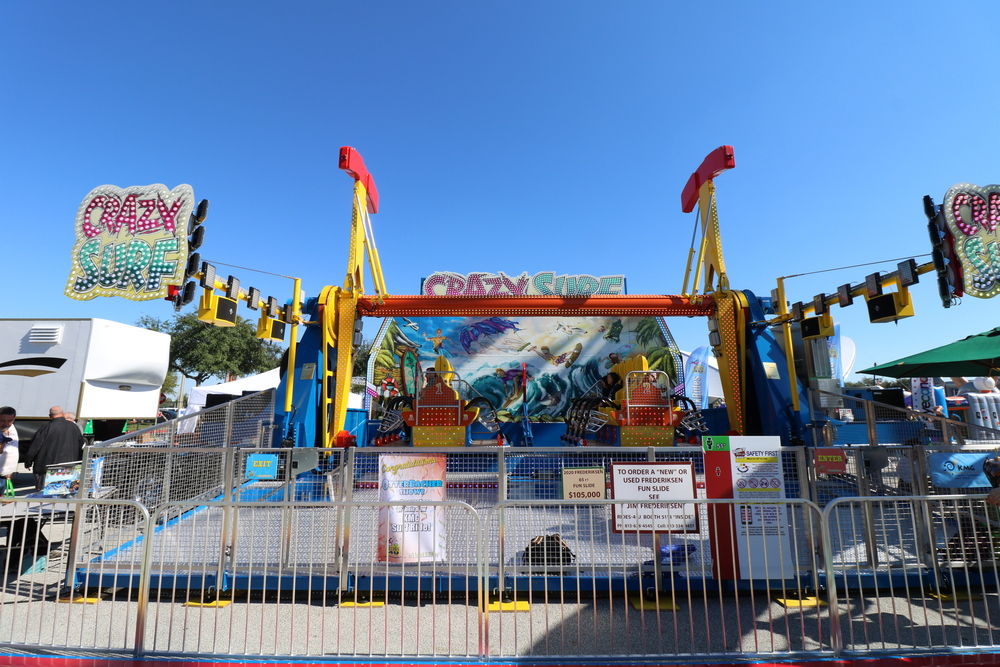 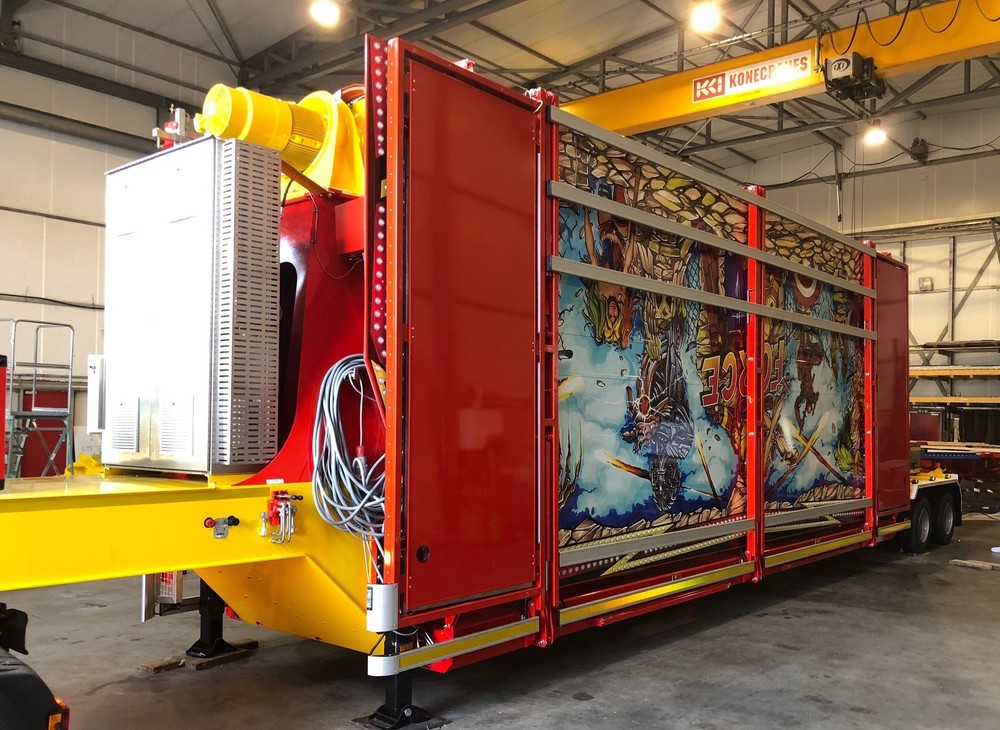 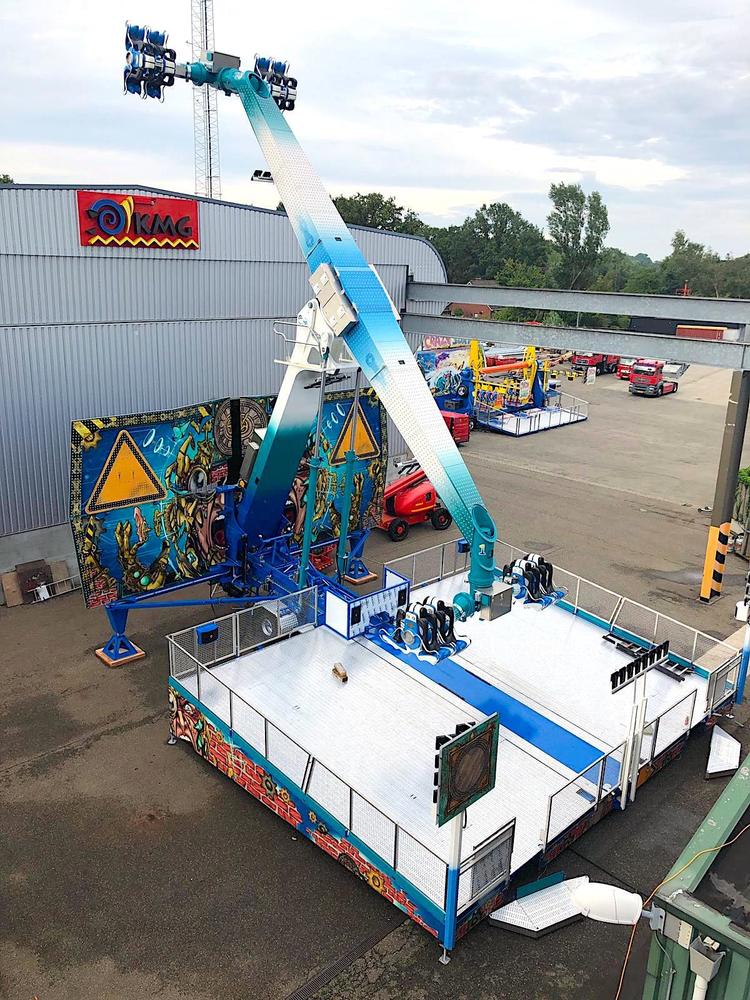 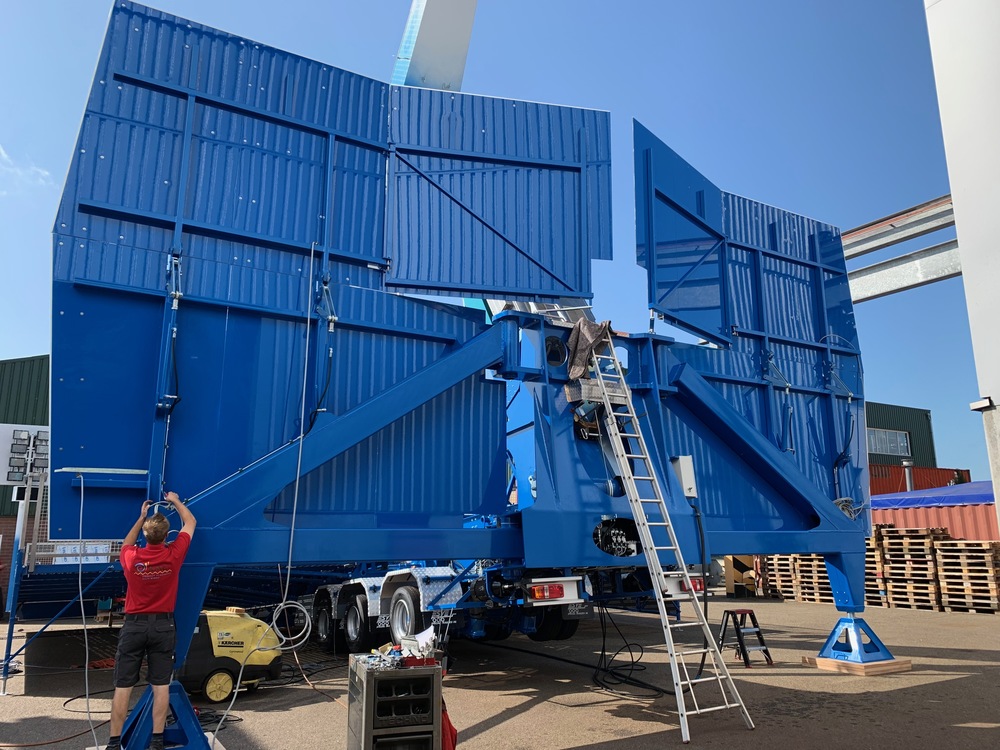 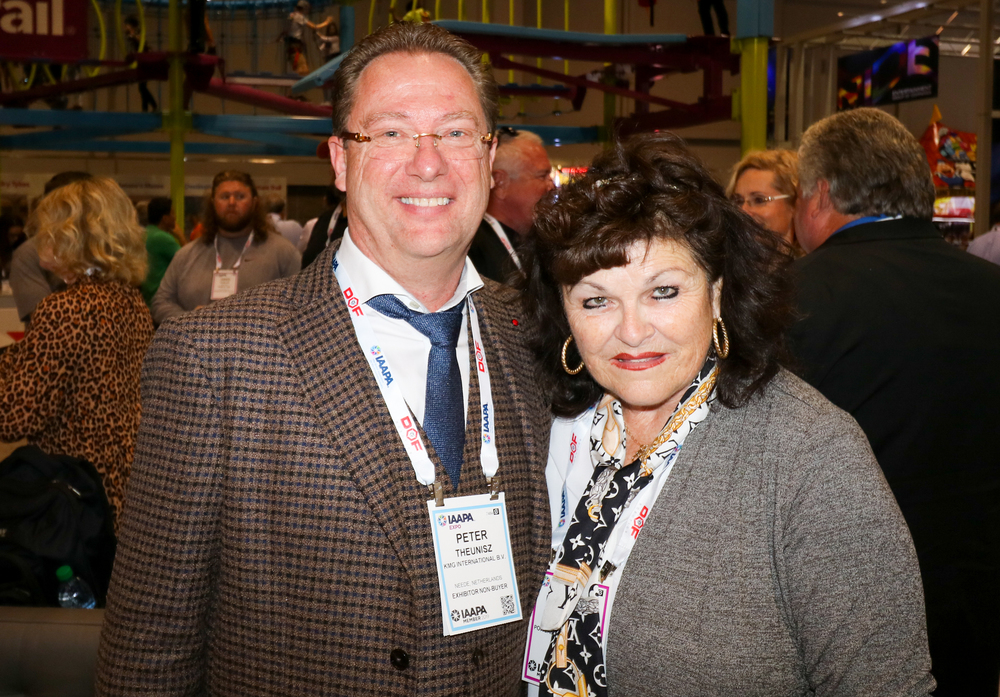 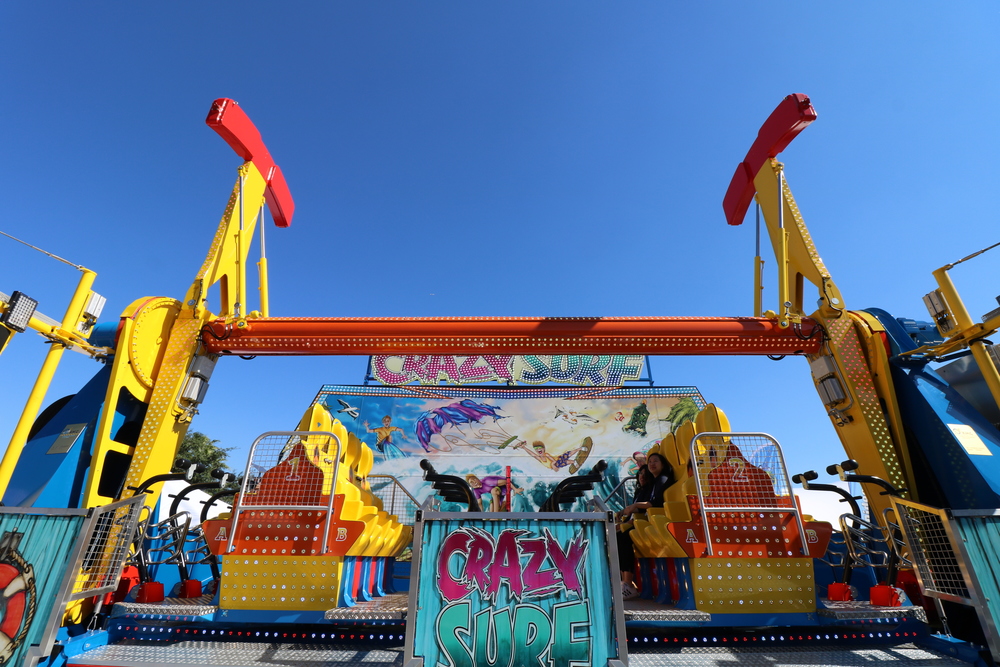