July 2020: Midwest and West Fairs and Carnivals start to Operate
It's a-go for Poor Jack Amusements, Crabtree Amusements, and the Wyoming and Souix Empire State Fairs 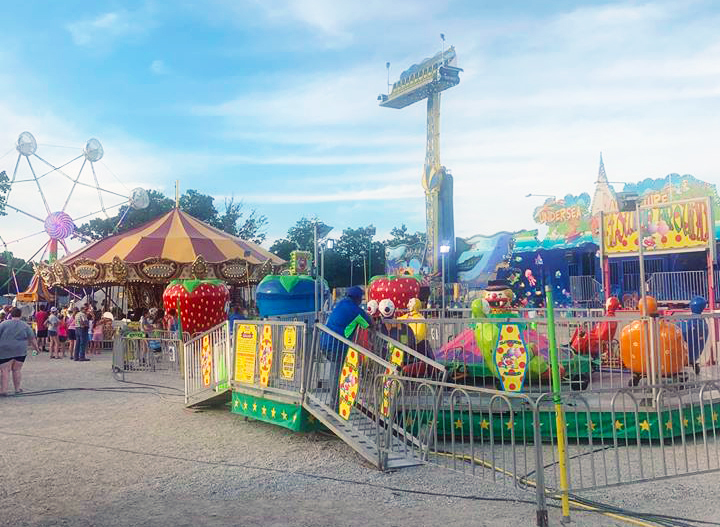 Poor Jack Amusements to play a modified Indiana and Ohio Route in 2020
The show reopened over the 4th of July Weekend in Indiana. Unfortunately, crowds were sparse during the first go-round.

In July, as many states set in motion reopening phases, allowing nonessential businesses to reopen on a restricted basis, a handful of carnival companies went on limited routes, playing still dates of shopping centers and a smattering of local and county fairs. The vast majority of fairs may have officially cancelled, but several August and September fairs have yet to give the word, and many of them are confident their fairs will safely continue with some restrictions.

It's a tough decision for challenging times, but what hasn't been challenging in this year? According to their reasoning, activity is better than not generating cash flow and many carnival companies headed out in July with the hopes of a better August.

Poor Jack Amusements, a carnival company that in one form or another has been playing fairs every summer since 1943, opened in Indiana during July, where he played still dates until the local fairs opened.


“We are plugging along and making the best of it,” said Tim Bohlander, Vice President, Poor Jack Amusements. “Most of the fairs have cancelled, but we believe the ones we are going to play in Indiana and other states will go on.”

For the July 4th Holiday Weekend, the carnival company was setting up a 12-ride midway in a fitness center parking lot in Richmond, Indiana, which will be followed by parking lot dates at a community center and a larger shopping center.

“People must have stayed home at their barbecues because we did very little business,” said Bohlander, who estimates that his revenue losses for 2020 is down “right about” 85 percent compared to previous years.

Nonetheless, as of now he's booked in 38 locations – which includes playing multiple same day dates by sending out downsized units. “A lot fairs cancelled too soon,” said Bohlander. “The health departments are scared if the fairs should open even when they're allowed to open. Some states like Indiana, they never shut down.  A lot of fair boards are older people, who I think are a little spooked. But it's up to the local officials and you're never sure if they'll cancel.”

Operating during COVID concerns means Plexiglas barriers, signage, sanitizing stations, and disinfectant crews. All staff members are masked and/or wear face shields, although masks are not mandatory to enter. “The hardest thing is the queue lines, making sure people are keeping apart.” 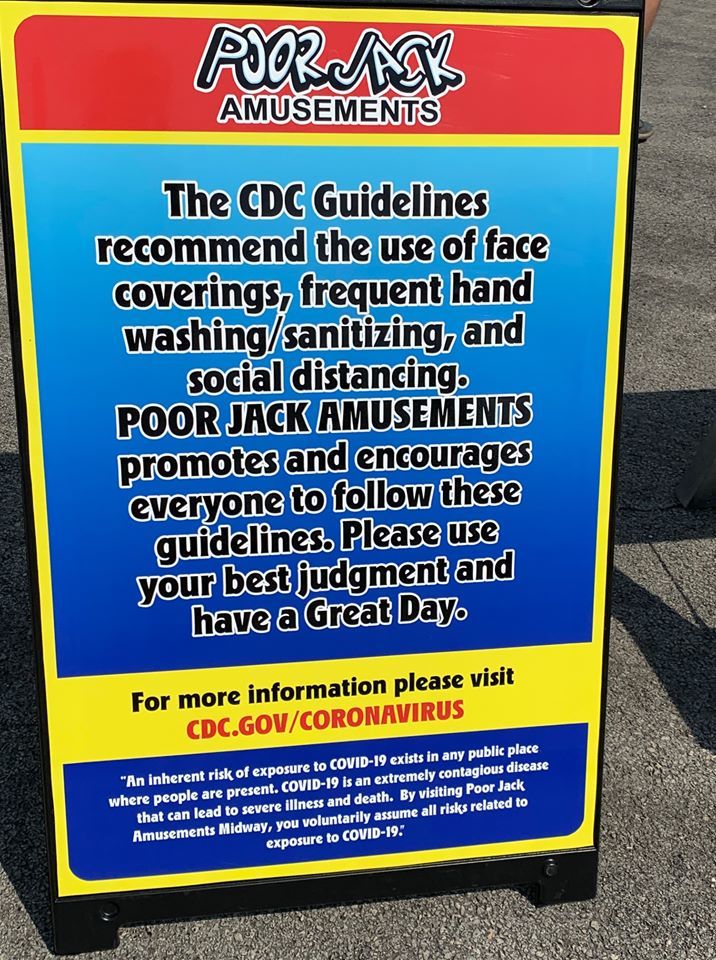 Bohlander is out with a limited crew of 18-20, about 10 of which are H-2B workers.“It's about as tough a year as we've ever had as far as help goes,” he said. “We wanted to pay our guys, keep their jobs. If they lock down more fairs, I'm not sure if we will be able to do it. We're not even certain of the fairs we have booked.” 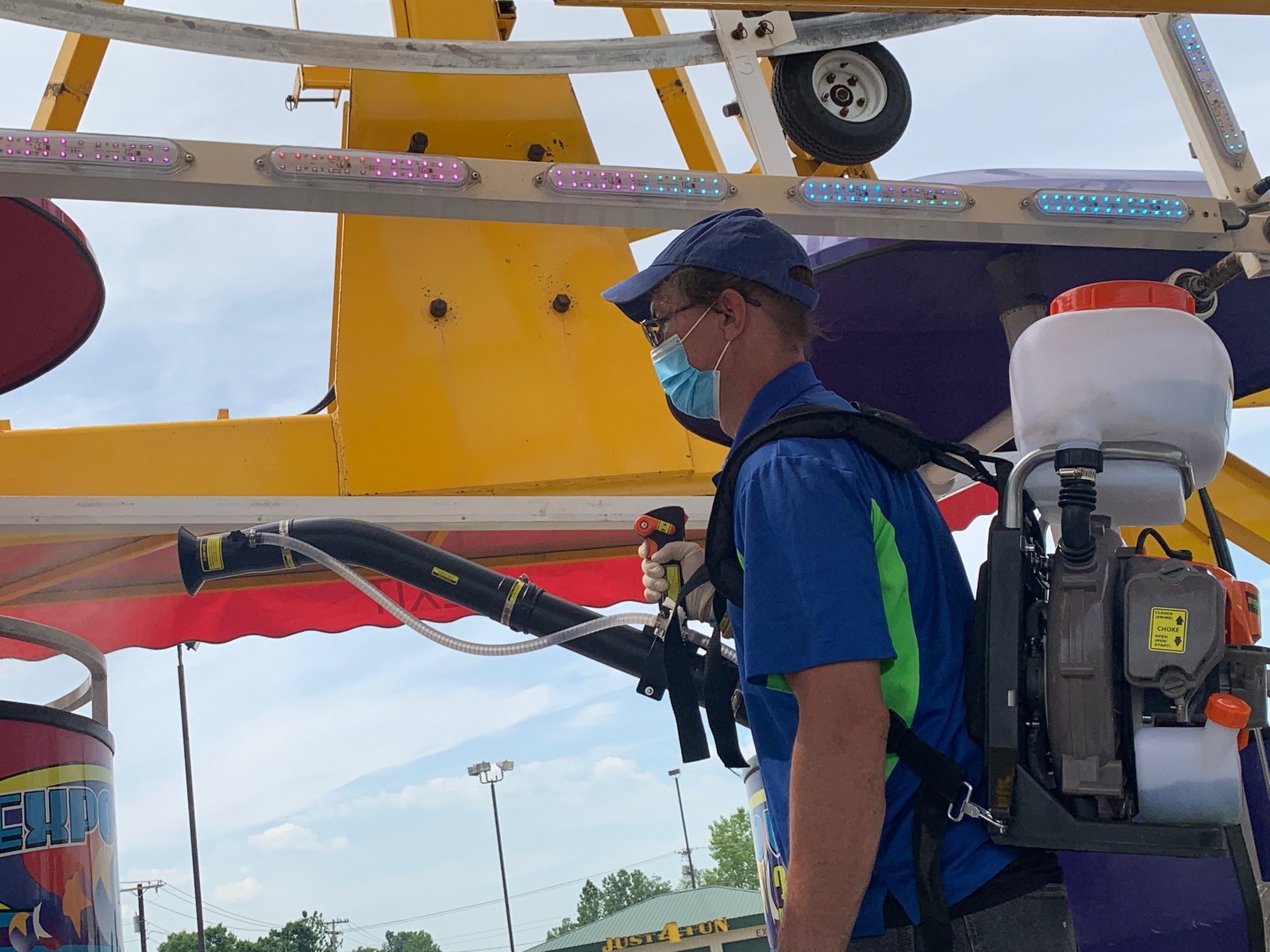 Poor Jack Amusements uses a gas powered fogging sanitizer to sanitize rides and equipment after use.


Crabtree Amusements is scheduled to provide the midway at the Sioux Empire Fair in South Dakota, and has a few fairs in South Dakota that the company has subcontracted for. In July, he played still dates, mainly to maintain his H-2B workforce, preventing their loss due to the visa bans the Trump administration implemented.

Carnival Warehouse spoke with Pat Crabtree in mid-July, who was playing his second still date of his truncated 2020 route. It's at a mall in Austin, where he's “just running tickets, no wristband. The revenue is nothing to write home about. All our roads lead to South Dakota.”

Crabtree pointed out that South Dakota never instituted a complete lockdown. Because all of his Colorado dates cancelled, decimating the southwestern leg of his annual route, Crabtree had to forfeit the Wyoming State Fair, although as of press time his September and October fairs, mainly in Texas, are still planning to continue, at least in theory. “We still have fairs that are on the fence, but I've got to take care of my events. Being on the road is better than just shutting down and having people not working.” 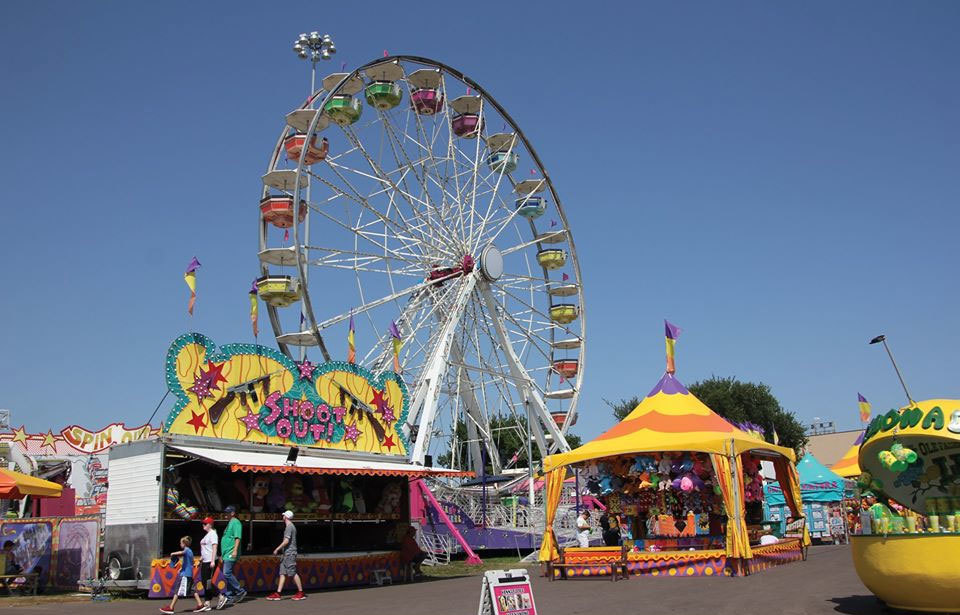 “Our board took the approach that what is happening in the state, that's really a matter of personal responsibility for somebody to choose to come to the fair,” said Scott Wick, President & CEO, Sioux Empire Fair, in Sioux Falls, S.D. “If someone doesn't feel comfortable coming to the fair, that's all right. We feel we are doing what is best for the community.”

There were local restrictions in place during the first phase of the pandemic, but those expired on May 29.

Wick said that by July 4, the decision to hold the Sioux Empire Fair became finalized. “We feel we have always been a go. We will have social distancing, we have increased the cleaning staff and in all our high traffic areas we will have constant cleaning. We have 55 gallon barrels of hand sanitizer; we have bulk orders of C-batteries, which are for the dispensers.”

Wick added that Crabtree Amusements has submitted a “comprehensive, detailed” plan for the midway, which will be more “spread out, a larger footprint that won't limit the number of rides.”

However, the fair has experienced other COVID-19 related fallout. Four independent food vendors have cancelled completely, while another has cutback to one booth, mainly due to older staff preferring to not to risk exposure to the virus. One sponsor dropped out, and the 4-H and FAA youth programs have also been canceled. Several grandstand acts, such as Old Dominion, have likewise dropped out of the 2020 fair.

The marketing for the fair emphasizes the safety of the event. “We have disclaimers about attendance and COVID on our signs, our television and social media ads. We've highlighted showing our hand-sanitizing stations.”

But will people come? “We're planning on the finer details. We're the second largest fair in the state. I can only assume that people want to get out and see the fair. We are prepared, and we are striving for the best customer service we can provide under the present circumstances.”

The Sioux Empire Fair, along with the South Dakota State Fair, which opens Sept. 3 as well as a smattering of small, county fairs, will be among the only fairs being held in 2020.


In 2019, the state fair associations of the Dakotas merged, forming the Heartland Association of Fairs, Festivals & Events, which also has members in Montana and western Minnesota. The vast majority of fairs and events – about 50 – have all cancelled, according to Mark Landa, board member of, the organization. “Most of the fairs have cancelled,” he said. “The North Dakota fairs tend to be earlier in the season, so they cancelled at what could be considered the height of the pandemic. A lot of the reason why there were no fairs in North Dakota was just timing. 4H and other organizations already cancelled, which hurt programming. But there was no official lockdown in South Dakota, and their fairs are later in the season. It's up to the local governments, and in a lot of cases, the smaller towns want to have their fairs.”

Having to deal with a global pandemic for an organization barely six months old has been a challenge. “Well nobody predicted this situation when we formed,” said Landa. “But we holding zoom meetings and help our members make good decisions. We talk about issues and how to follow the guidelines. It's a time of crisis, but we're supporting our members.”

He added that the fairs that have cancelled are planning for 2021. “I haven't heard of any fairs in the Dakotas who cancelled that are going out business. There are concerns and financial decisions, but no one has talked about going out of business. We've learned a lot of about living with this virus. I expect our fairs to come back next year. They may not look exactly like they did in the past, and they will have to make adjustments.” 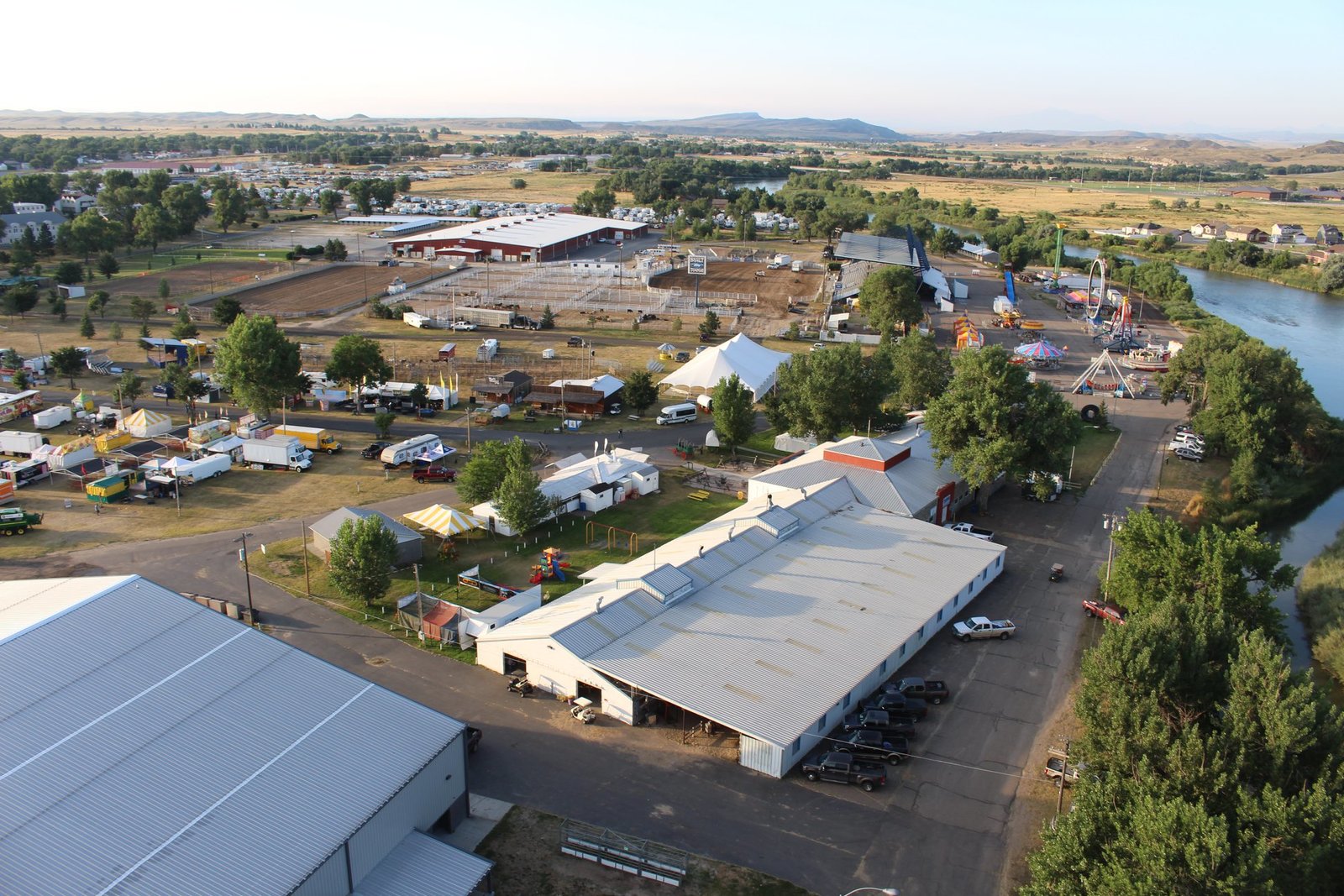 Courtny Conkle, who has been General Manager of the Wyoming State Fair since September, prepared a 300 page report explaining all the guidelines and restrictions in place at the fair. The 118,000 –square-foot fairgrounds encompass about 60 separate venues, ranging from dorms to a Beer Garden. “The plan is updated every day, and we've looked at every single aspect of the fair, to see what is high risk and what can we do to lower that risk and mitigate exposure,” she said.

Conkle admits it was disheartening to hear about so many fairs cancel, “but we are convinced that we can hold a large scale event responsibly and safely. It's been hard not to get discouraged, but we've been prepared to make the necessary pivots to hold the fair.”

The fair has hired two consultants, one for the Grandstand and the other for Livestock shows, to ensure the safe fair. The fair lost one concert act and several vendors.

“We want to keep our customers and our team safe, but we also want to know what the fan experience will be. We have a lot of space and Wyoming is sparely populated, so the social distancing and other restrictions shouldn't be as much as a problem as in other states”

In July, the Wyoming State Fair announced that Carnival Midway Attractions will replace Crabtree Amusements as midway provider. Crabtree voluntairly gave up the event after his Colorado route cancelled, making the trip to Wyoming unfeasible.  The fair has also kicked off a modified marketing campaign. “We are advertising heavily, especially on social media. With so many other states cancelling, we may get more interest. We have all the warnings and educational signage, we want people to know what to expect and to be comfortable with going to the fair. But we also are keeping the fun in fair, we've added some levity too.”

The show reopened over the 4th of July Weekend in Indiana. Unfortunately, crowds were sparse during the first go-round.