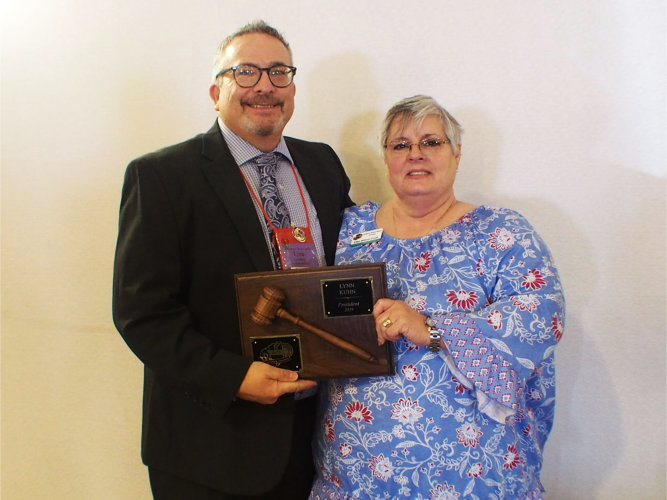 The Indiana Association of Fairs & Festivals (INAFF) opened the New Year with cake and champagne. The organization turned 100 in 2020, making it one of the oldest fair manager groups in the U.S. and there was a general consensus that 2019 was a good year for the fairs & festivals in the Hoosier State.

“In 2019, weather was a kind of a factor,” said Ellen Wilson-Pruitt, a long-time board member of the Morgan County Fair and new president of the INAFF. “There were a couple of weeks where it was ungodly hot, and some fairs had terrible rain. But dealing with weather concerns is nothing new. Overall, I think it was a very positive year for fairs.”

Coupled with the chance to celebrate its first century, INAFF's annual convention, held January 3-5, saw a robust attendance of more than 1700 attending the meeting – a significant increase over the 2018 attendance of approximately 1300. The organization represents 63 Fairs AND 125 Associate members. Weather may have had a negative impact on some fairs, but at least old man winter took the first weekend of the year off, which also helped improve the attitude among convention attendees.

“We had mild weather for the convention, which is not always the case, we were very fortunate,” said Wilson-Pruitt.  “The celebration of the centennial was also a factor too. We had a very good convention. Indiana Fairs are alive and well and we're constantly evolving. Our fairs and festivals have become better at encompassing both their agricultural roots with their new urban populations.”

According to Steve Patterson, Director of Administration for the INAF and Executive Director of the Hendricks County 4-H Fair, the single category that showed the most increase however was “entertainment,” adding that there was an extensive entertainment “showcase each evening with Henry Lee Sumer performing on Friday night to celebrate the 100th Anniversary.”

“We had some new promotors exhibiting,” said Wilson-Pruitt. “They were both more local-based, Indiana promoters as well as nationally known promoters.”

While the expanded entertainment offerings had a wide range, a notable, more specific uptick in interest occurred for bigger name acts that might draw bigger crowds. “Our fairs are evolving into bigger fairs, building on the local agricultural foundations. There are risks in bringing in more costly acts, but I think the smaller fairs are less apprehensive. We have found that at our county fair, bringing in a big name act worked well for us and we were able to market out of state, to Kentucky, Illinois and Ohio. That's a pretty good stretch. Most fairs are looking at bigger name acts for their grandstands again.”

She said there were a definite increase in the number applications and videos submitted for the INAFF Entertainment showcases this year. “We saw more music, the fairs and festivals want more music. Country music is the most popular; the great majority of Indiana fairs were interested in country musicians. There was also an increase in rock tribute bands.”

Crowd and other safety topics were the most well-attended educational workshops. Safety seminars include: “Grandstand Safety during the operation of the Fair/Festival”; “What is the Indiana Fire Marshal looking for when your Fair/Festival is inspected?”; “Is your fair/festival prepared for an ACTIVE SHOOTER crisis - preparing for the Aftermath - Emergency Plans and Planning!”, and “Zoonotic Disease Risk at Fairs & Festivals: Get the Facts.”

“It's the just the way of the world is, and fairs are concerned about many safety issues,” she said. “There are always more safety issues each year. Fairs and festivals are investing more in their safety systems and personnel. There is just more awareness on a variety of safety issues.

She added that the Zoonotic Disease seminar was probably the most popular among fair managers. “This is always topical. It was presented by the state and very well attended. People are very worried about new Ebola outbreaks and animal health regulations. There are more liability issues and legal aspects this year. People were very concerned about the outbreak of legionnaire disease from hot tubs at the North Carolina Fair.”

On the horizon for 2020 are changes that could impact the game stands on the midway as well as horse racing, raffles and other fair mainstays that some may consider related to gambling. The seminar, “Question and Answer with the Indiana Gaming Commission” was a must-attend for many fair managers. “The gaming issue will be big this year. The legislature changed the rules and what is going to be considered a game of chance is new. They are a lot more stringent. We're not sure what the effect will be at this point.”
Just as ominous is a rising anxiety in the Hoosier State about carnivals. Patterson said that a major worry among the Indiana fair industry is a declining number of carnival companies in the state, especially those willing to service smaller events. The problem has been compounded by the industry-wide workforce crisis.  Indiana fairs have been impacted by “H2B issues and the fewer number of carnivals,” he said.

In addition to Wilson-Pruitt being sworn in as president, other office changes at the convention included: Don Leighty,  Noble County Fair – Vice President; Andrew Schoendienst of Luehrs' Ideal Rides was selected as Carnival Representative to the Board from the Associates and Todd Richey, Scott County was elected to serve on the Board as a Fair Representative.

Inducted into the INAFF Hall of Fame were Kory Wilson of the Cass County Fair; Thomas Smith of the DeKalb County;  Todd Uhl of the Indiana State Fair and  David Brenner of Vanderburgh County

A major issue for Indiana Fairs – and one for many fairs nationwide – was an emerging conflict between fairs and school systems. Although not addressed in any formal fashion at the 2020 convention, according to Wilson-Pruitt, the fact is that schools keep moving start dates earlier in August, encroaching upon many fairs calendars.

Less summer means more fair days overlapping with school days, negatively impacting weekday attendance. “In speaking with the various fairs one of the concerns they all have to deal with is the shrinking length of time of summer break from school,” she said. “This of course moves the starting date of the State Fair forward on the calendar and thus causes a great overlap of counties holding fairs simultaneously. There are fairs that operate during the time school is in session and looking down the road we may need to address dealing with this change.”