How Midway Game Operators are Coping with the Pandemic 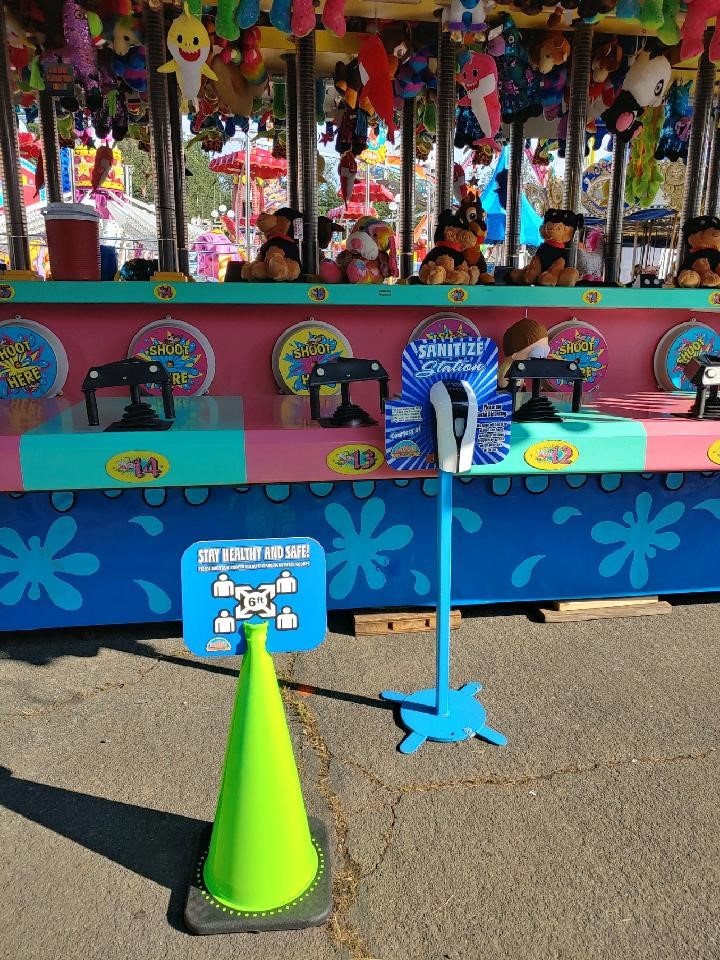 GAME OPERATIONS AT THE DELAWARE STATE FAIR
Game operators at the recently completed Delaware State Fair implemented an abundance of safety precautions to promote guest and employee safety during the pandemic.

Sara Ketcham, owner of several game and food concessions, is grateful she was able to open at the 2020 Delaware State Fair, July 23rd-August 1st. Normally, Ketcham Concessions travels along the East Coast with Wade Shows' second unit, but with continued cancellations, the Delaware State Fair was the first event Ketcham has played since Mid-March. Although she is heading back home to Florida rather than moving to a new event, Ketcham maintains optimism about the future of events, bolstered by a successful run in Delaware.

As soon as the Governor of Delaware gave the state fair the “go ahead” to operate, Ketcham began to put together a COVID-19 safety plan. “I started the thought process going in knowing that I needed to make the guests as comfortable as possible, make them feel at ease so that they were more inclined to play games and have a full day at the fair,” says Ketcham. First, she designed signs to put up at all of her games informing fairgoers about COVID-19 safety tips: proper hand washing, sanitizing, and social distancing. At each and every game, Ketcham placed at least one hand sanitizing station; “we had two or more at our larger games,” says Ketcham.

In addition to signage and hand sanitizing stations, Ketcham had to get creative when coming up with a plan for high-contact games such as the balloon pop, the ring a duck, the ring a bottle, and the water guns. “For the balloon game, we changed from wooden darts to plastic darts which we put in sanitizing solution after every use. Then, I got big Rubbermaid containers and labeled them as disinfecting areas and put the rings from the ring a bottle and ring a duck in there to soak after each game,” says Ketcham. One of her employees was hired for the sole purpose of making rotations hourly to go around and thoroughly sanitize anything people touched at each game. While Ketcham was sure to take the brunt of the responsibility when it came to cleaning her games, she also allowed customers to have some agency and responsibility in the matter too. “We had multiple spray bottles with signs at the water race and by the fishing poles so customers could spray them themselves just like how people wipe down their own carts at the grocery store,” says Ketcham. 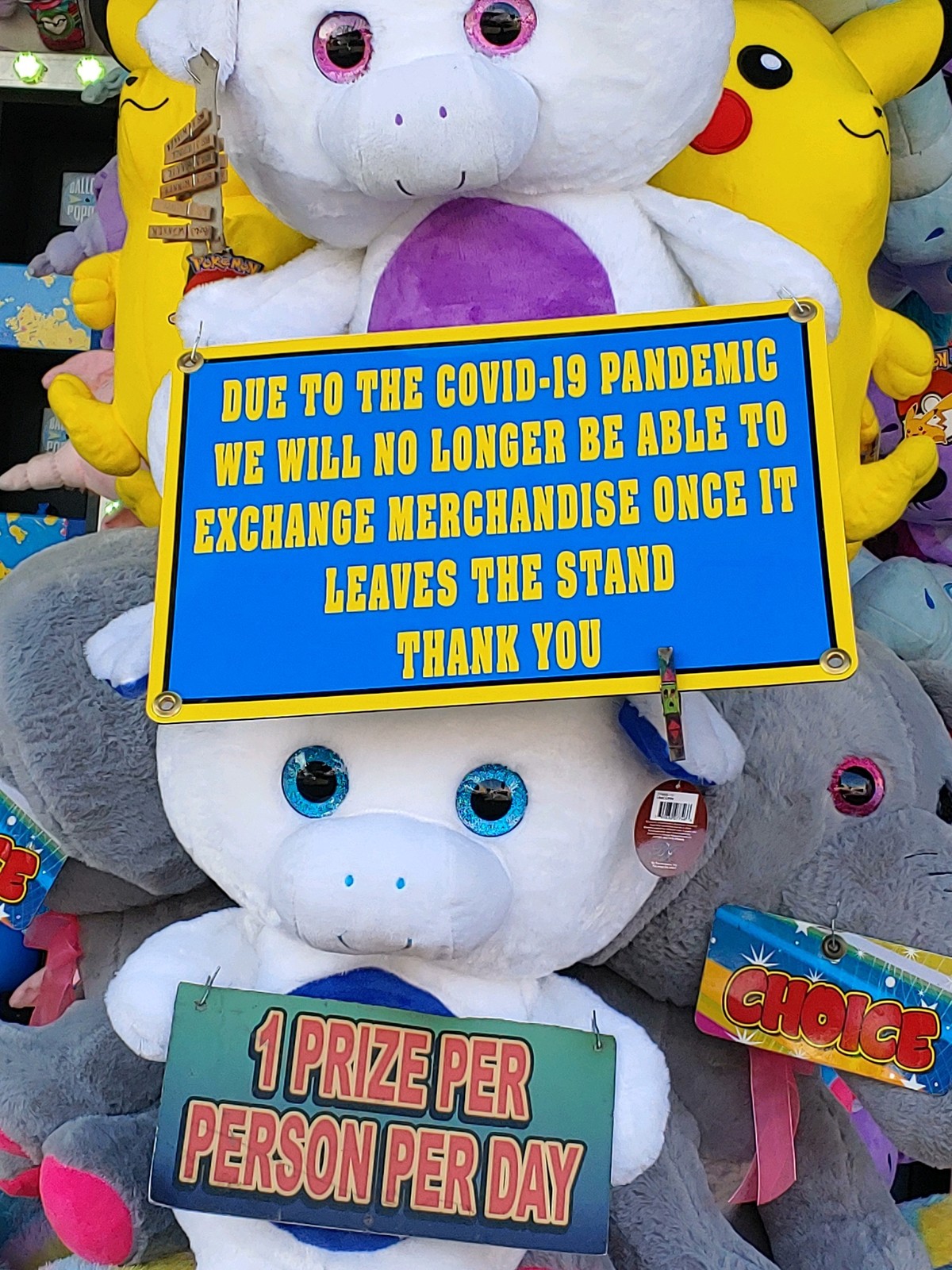 Although the people who came out to the Delaware State Fair were limited compared to years past, according to Ketcham, they were engaged and informed customers. “The people who came out wanted to be there. They were a breath of fresh air. In all my time in this industry I've never met more thankful, appreciative, and happy people. We had zero complaints,” says Ketcham. Scaled back from years past, Ketcham had 1 food stand and 8 games at the fair; “you could look down the midway and see most people were eating, playing games, or riding. They were all productively doing something and participating in the fair,” says Ketcham.

As she heads back home, Ketcham reflects on her love of the outdoor amusement business and the success of the Delaware State Fair. Like many showmen, Ketcham grew up on the road with her family and can't imagine living any other life; “growing up in the business, some people continue to do it because it's all they know, I've done a few different things outside of the industry but I've always come back. I realized this is what I want to; I love the traveling and amid the chaos of it all, there's consistency,” says Ketcham. After establishing productive safety protocols and seeing them in action, Ketcham is grateful to Wade Shows and Powers Great American Midway for their hard work in opening at the Delaware State Fair and acknowledges the positive example the two companies have set for other carnivals; “We all knew going into it that we were taking a risk, but between people on Wade Shows and Powers', they're just such committed showmen. Somebody had to do the first major fair and wanted to set a precedent of how to do this right. The show can go on, we just need protocols in place to make it happen safely,” says Ketcham. 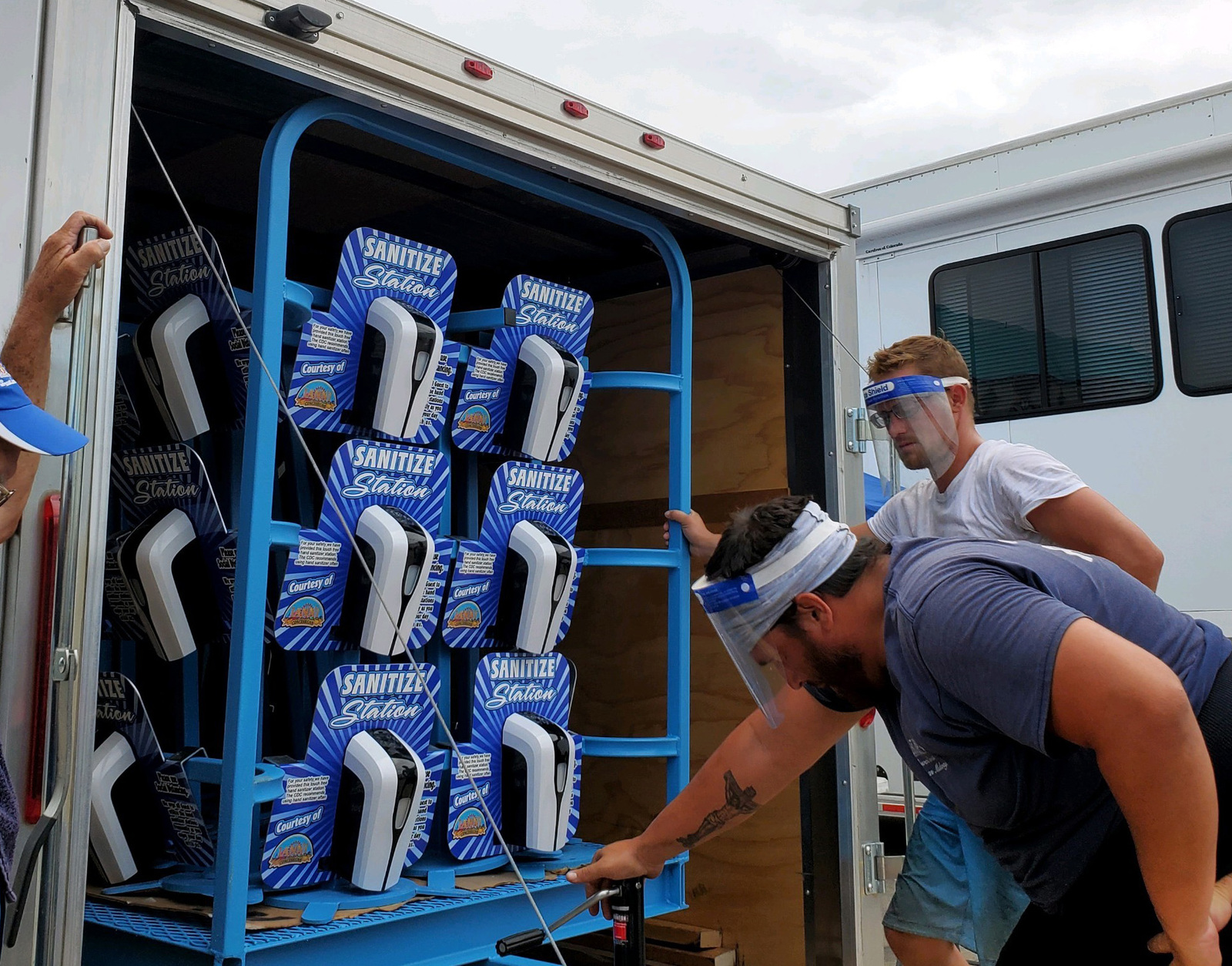 Steve Ianni is the Concession Manager for Power's Great American Midways and  had a major role in creating the show's COVID-19 protocols, particularly for the games. “We started early with COVID preparation. Corky Powers had a plan for the carnival and I had to do some thinking with the gaming department. I realized I have to handle each game individually,” says Ianni. However, making plans for games is difficult to do from home, and a comprehensive strategy is much easier to form out on the road when challenges and shortcomings are easily identified.

The 2020 Delaware State Fair was Ianni's first event since the industry shutdown amid the COVID-19 pandemic, giving him the opportunity to put his protocols in place. “Figuring out how to operate games with social distancing and maintaining 6 ft between customers is a big challenge. You come across things you wouldn't think of,” says Ianni. Normally, balloon game operators inflate the balloons manually, but how can they do that while wearing a mask? Darts are typically wooden and passed from player to player but how can employees ensure they're sanitized in a timely manner? These are some situations concession managers like Ianni have to tackle at any event.

“I did a lot of research and started using spray bottles of disinfectant at games like the basketball and water guns to clean between each use. We also have sanitizer stations at each game; 1 on each lineup stand and 2 on a center,” says Ianni. He worked with Chuck Wheeler from Amusement Wraps who built stanchions to have sanitizer by the games instead of mounting them on fencing like the rides. At first, availability of products was a challenge for Ianni and his team. Eventually, they were able to acquire battery-operated hand sanitizing stations and decided to use spray mist vs gel. “The stands are very professional looking, they have our logo and show's colors on each one,” says Ianni. Sometimes, the Powers team will use the stanchions to help encourage social distancing alongside bright green traffic cones with signs pointing out 6ft for guests. 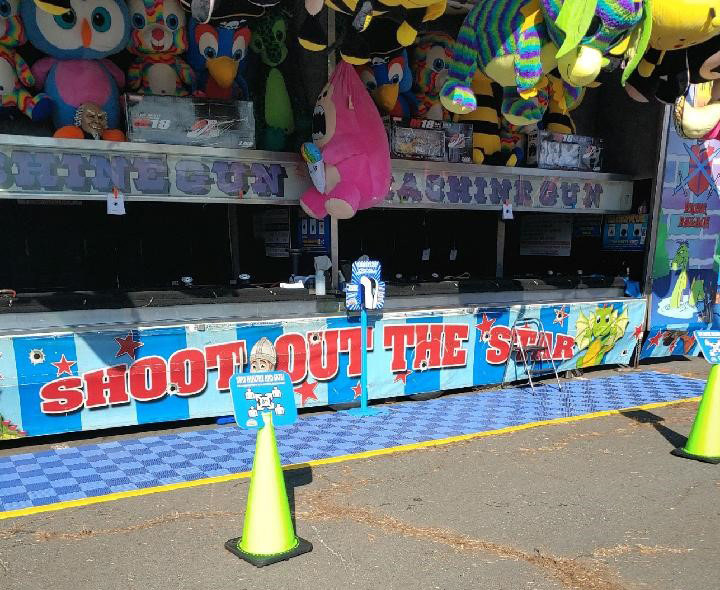 
Employee health screenings are of the utmost importance for Ianni and the entire Powers team. Two hours before opening, all employees have a daily temperature check and must fill out a COVID questionnaire monitoring for symptoms and exposure. Questionnaires are filled out using a tablet so that all health data on employees is uploaded to the Powers' office. “All employees have to sign the questionnaire at the end. We take it very seriously, employees who miss the check can't work,” says Ianni. Although traffic in Delaware was lighter than normal due to the lack of major entertainment and some downsizing, Ianni felt the customers who came out were happy with the precautions in place and actively engaged the rides, games, and food. After the Delaware State Fair ended, Powers Great American Midways headed to a shopping center in Northern Virginia to continue their season. At this event, health screening is extended to customers who have to get their temperatures checked before entering and must wear masks. “People are getting used to the rules and usually have no problem following them,” says Ianni.

All in, to prepare to go out for the 2020 season, Ianni and his wife spent about $10,000 to acquire the particular equipment needed to follow safety protocols. “It's a big expense but we're getting used to it. Corky (Powers) doesn't cut corners and I follow that example. We want to do this the right way; it's easier to get the permits you need to stay open if you go the extra step or the extra mile,” says Ianni. For him, the ability to work right now is a privilege as many of his friends in the industry have not been so lucky. In business since 1970, 2020 was the first year Ianni was not working on the 4th of July. “We're still on pins and needles out here but we're going to continue to give it our best shot and take baby steps forward,” he says. 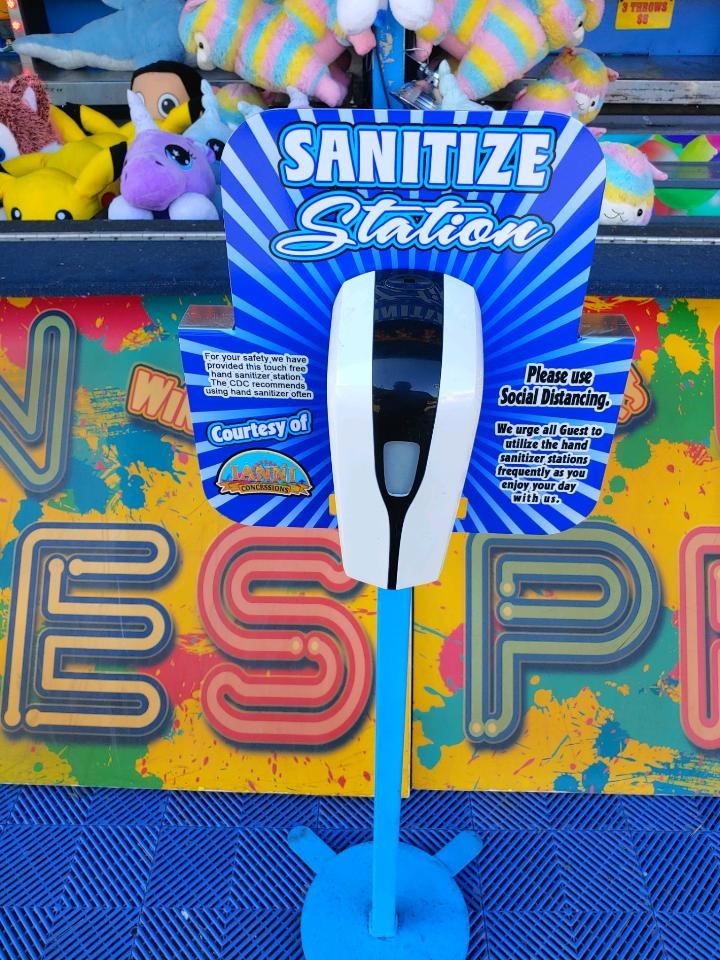 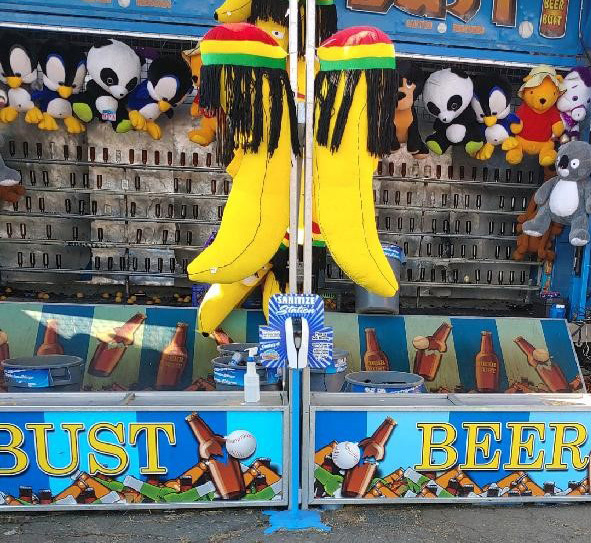 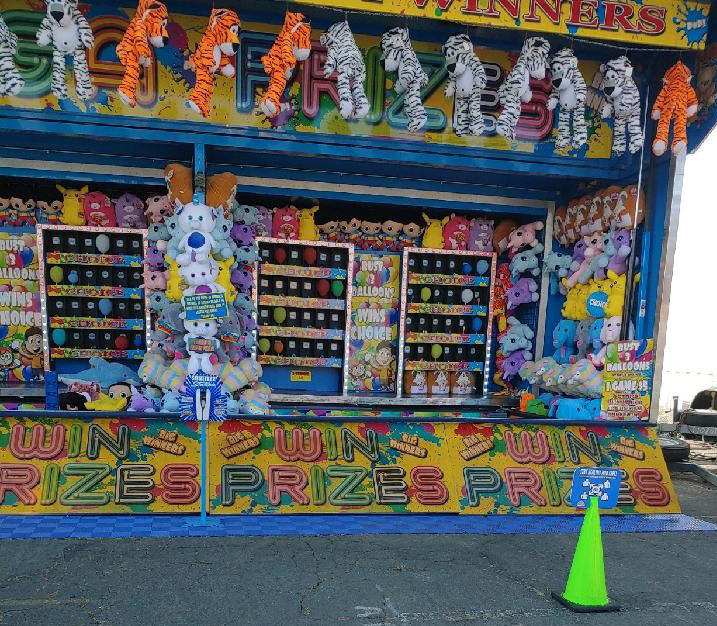 Game operators at the recently completed Delaware State Fair implemented an abundance of safety precautions to promote guest and employee safety during the pandemic.