Hitch-Hiker / Personal Protected: How One Amusement Industry Leader Innovated Its Way Through The Pandemic 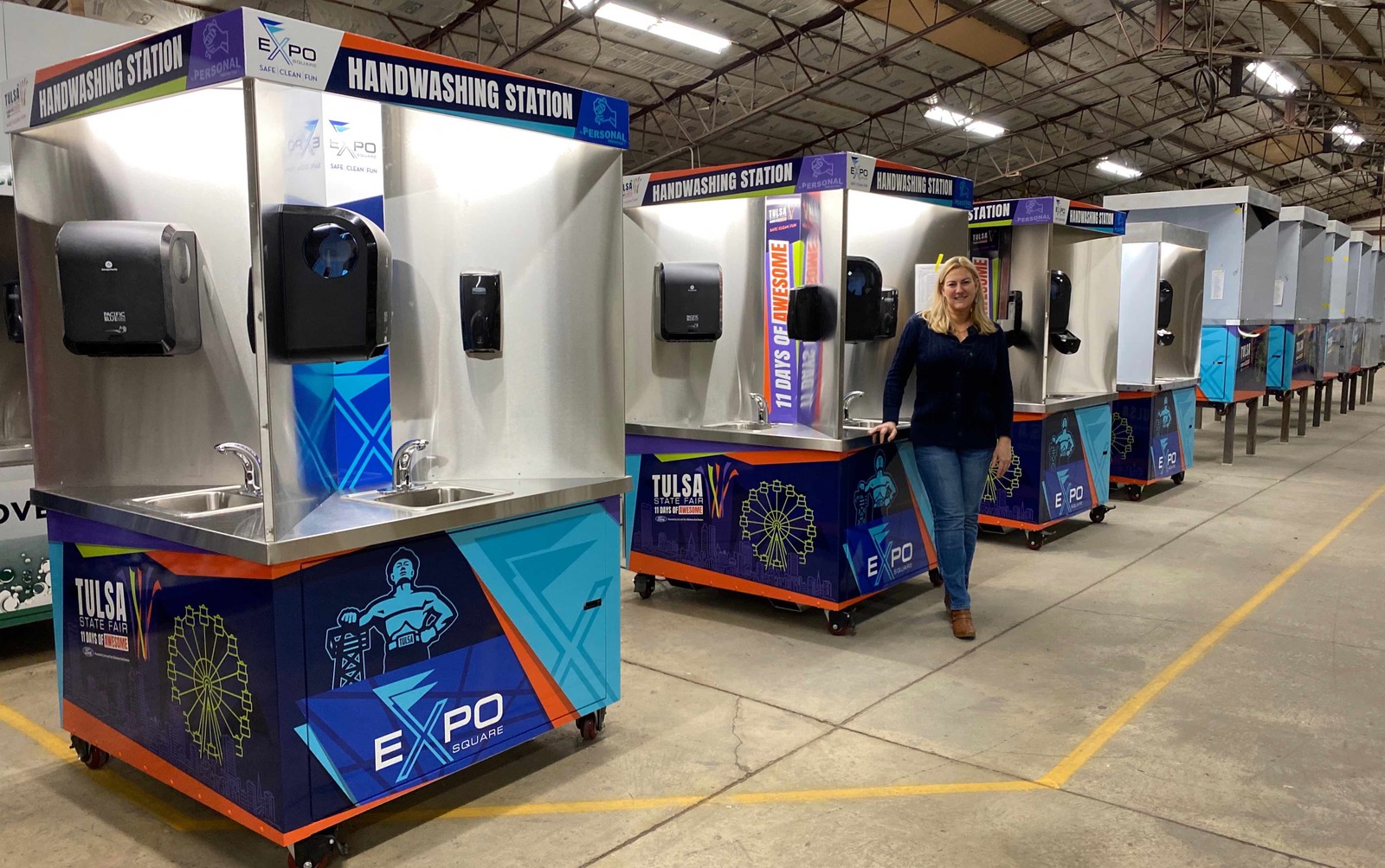 As the saying goes — “When life gives you lemons — make lemonade”. That's easier said than done for most, and especially during this past year which posed so many challenges for the outdoor amusement industry.

Jeff Swartz of Hitch-Hiker Manufacturing was just recovering from February 2020 hip surgery when the effects of the Covid-19 Pandemic began to be felt. Swartz delivered 3-4 trailers in late March and early April as customers hoped for only a short pause, but discussions of new builds and pre-orders began to slow and then altogether stopped, as amusement industry closures continued and the future became less and less uncertain.

Some customers who were in production on trailers asked to put the progress on hold while others, remaining hopeful, pushed to open. But as the situation became more dire, even the most optimistic of customers asked to hold back on new equipment production.

As Swartz ruminated on the pandemic and what it would take to reopen, Daily media and Governor briefings were encouraging everyone to wash hands, stay 6ft. apart and wear a mask, a refrain that is now all too familiar to us.

It occurred to Swartz, while discussing the news in a casual office meeting, that two of those items, hand washing and social distancing, were something his company could assist with.

An idea quickly came to mind and Swartz retreated to his office to sketch out his idea for getting businesses open. His idea addressed not only combined hand washing and social distancing aspects, but also brought into play an element he is constantly aware of with his amusement business experience — volume.

With a sketch in hand, Swartz showed the rendering to the office staff in his office and from their reaction — he knew he was on to something that could provide a much needed solution for businesses during the pandemic and beyond.

He immediately went to work on fabrication, repurposing personnel to the new project. About a week later, they had drawings prepared, patent applications filed and their first new prototype — a four person hand washing station that provided distance barriers between users and quick, easy access to keeping hands clean. Best of all, it could provide these services to large numbers of people per hour — up to 720.

In late April and May, Tressel visited the Hitch-Hiker facility and quickly saw this was the solution and tool for helping get students back on campus. Tressel envisioned the units being featured at entrances to large gathering areas such as the student halls, and Tressel placed an order for the first 10 units, supporting a local manufacturer in the process. Positioned in high volume areas, the 10 units can wash 7200 sets of hands per hour! 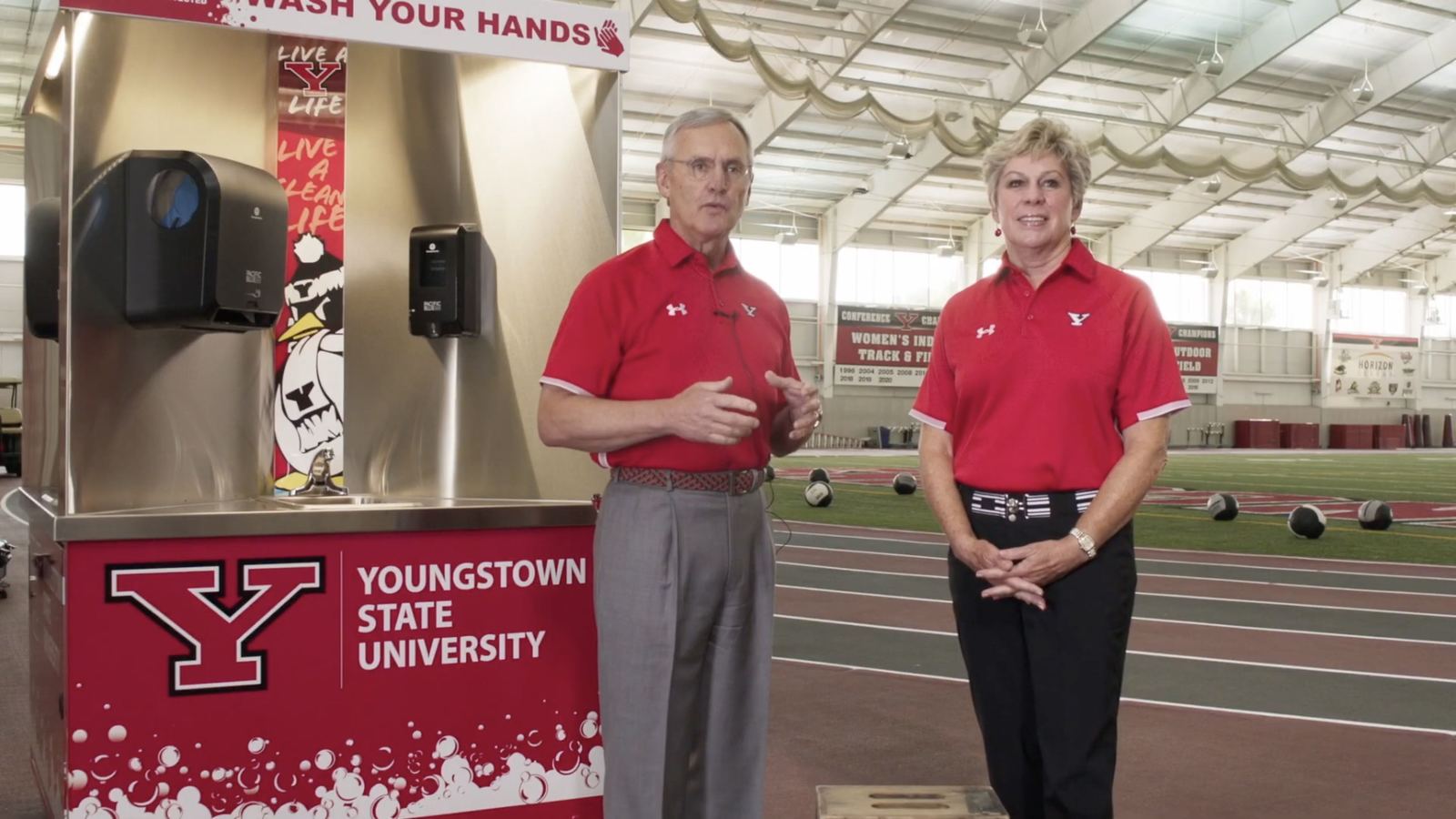 Swartz realized that the market for this equipment reached well beyond the amusement business so he decided to start a new company that better reflected the product's target.

Building upon his experience in the high volume amusement business, Swartz developed these hand washing stations to be touchless and self-sustaining. Each unit is able to service 6,000 people — 1,500 per washing station — before service is needed.

Traditional portable washing stations have only a 5 gallon water capacity and can only handle 40 people before needing service. Swartz added benefits such as touchless soap and water, freshwater connections, a small water heater to provide tempered water, a bilge pump to go to a drain system, gray water tanks and even a 15 amp plug for lights.

The systems use automatic paper towel dispensers instead of air dryers to conserve power and resources. The entire unit draws under 13 amps and can be operated using a standard extension cord.

Swartz even added bright graphics and the ability to add sponsors, bringing along a touch of “flash” that his food trailers are famous for.

Building upon the success of the college order, Swartz donated a unit to their local high school for them to place between the bleachers and concession stand at the stadium. The school loved it and ordered two more units; one for the high school and another for the middle school cafeterias as well as recommending them to other school systems in surrounding counties.

As the county commissioners became aware of the success of the stations in the schools, they created a program to put them in every single high school in the county.  This resulted in 23 school systems across the county having at least one of these units.

Once those units were delivered, the local health department contacted the company and orders were placed for Parks and Recreation Departments and even the Health Department Building itself!

Things began to come full circle as the Tulsa State Fair placed an order for 10 units which have since been completed and shipped to Oklahoma. 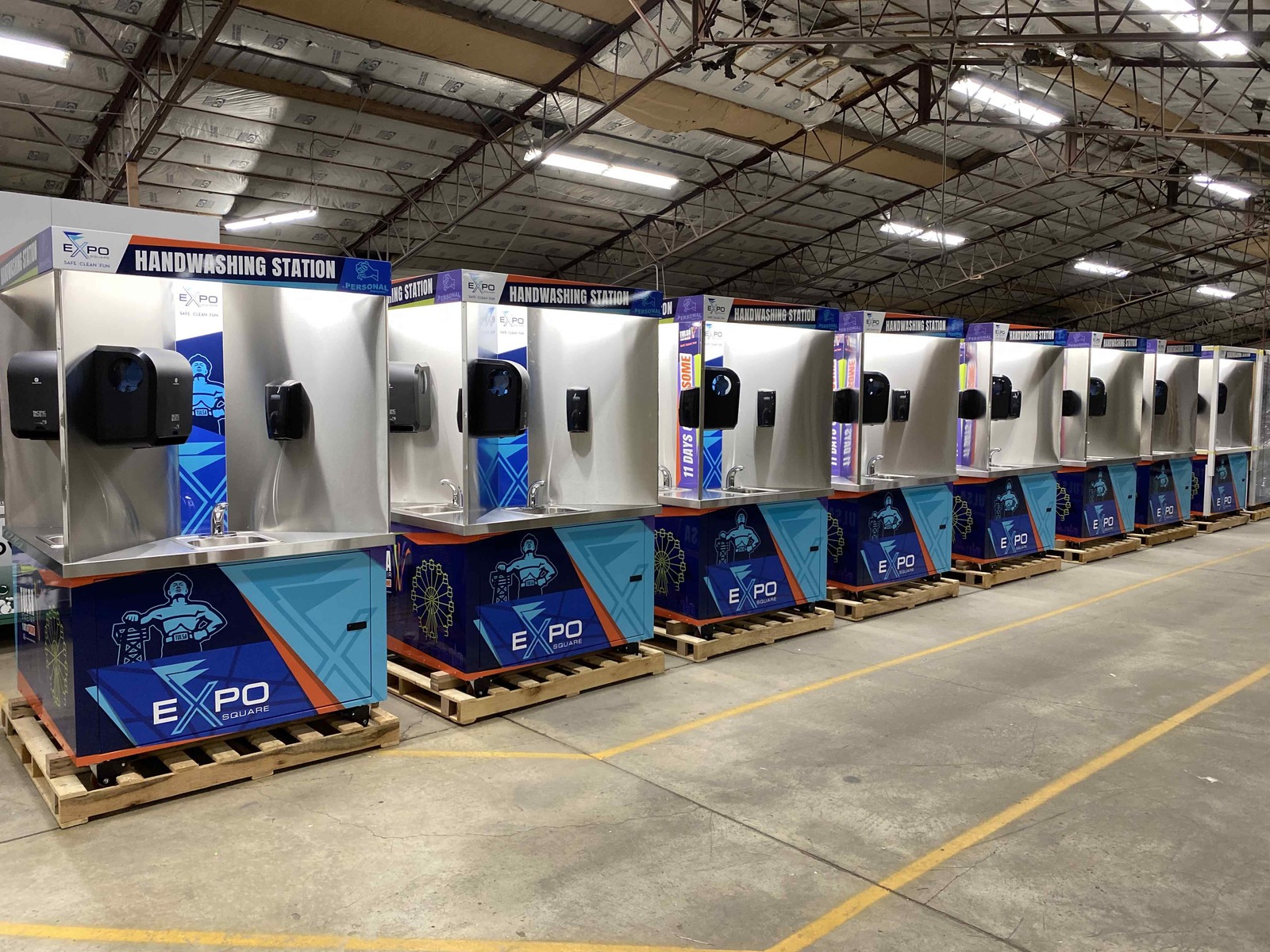 Swartz was now back in the amusement industry again where he sees much needed potential for the product.

He says many fairs, like other clients when initially thinking of opening, envision single use hand sanitizer stations or a sink to comply with CDC or health department guidelines, but upon further reflection, much more is needed or even required for reopening.

The CDC for instance, recommends hand washing with soap and water for a minimum of 20 seconds, something that can not be accomplished without proper equipment, and if fairs are expecting to do anywhere near the volume of people they have had in the past, they will need a high quality, high volume, convenient and attractive solution that provides safety and confidence to their returning guests.

“The hand washing units take the bottleneck away from existing bathrooms and promote the need to wash hands when entering the facility, not just after visiting the restrooms. They offer a convenience that is not out of the way and will even inspire someone not thinking about washing their hands to use one when seen”, said Swartz. 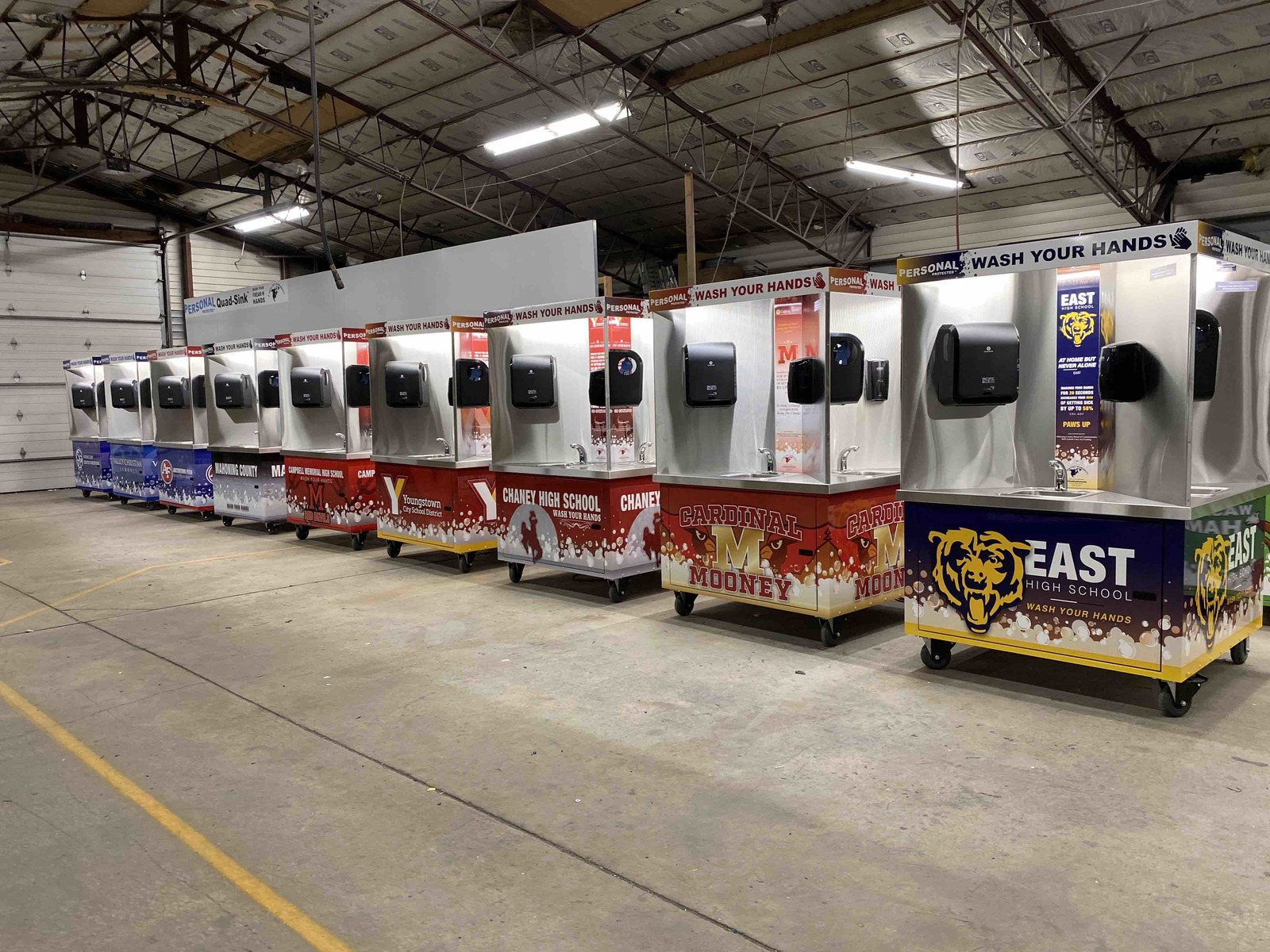 He says the units could be placed at front gates, building entrances and high volume areas to emphasize the importance of hand washing. They are built like our trailers, high quality and designed for decades of use.

Swartz believes he has a great solution in order to help large events reopen and show health officials that fairs and carnivals are being proactive about the health and safety of their guests and ready to welcome them safely back to the midway. 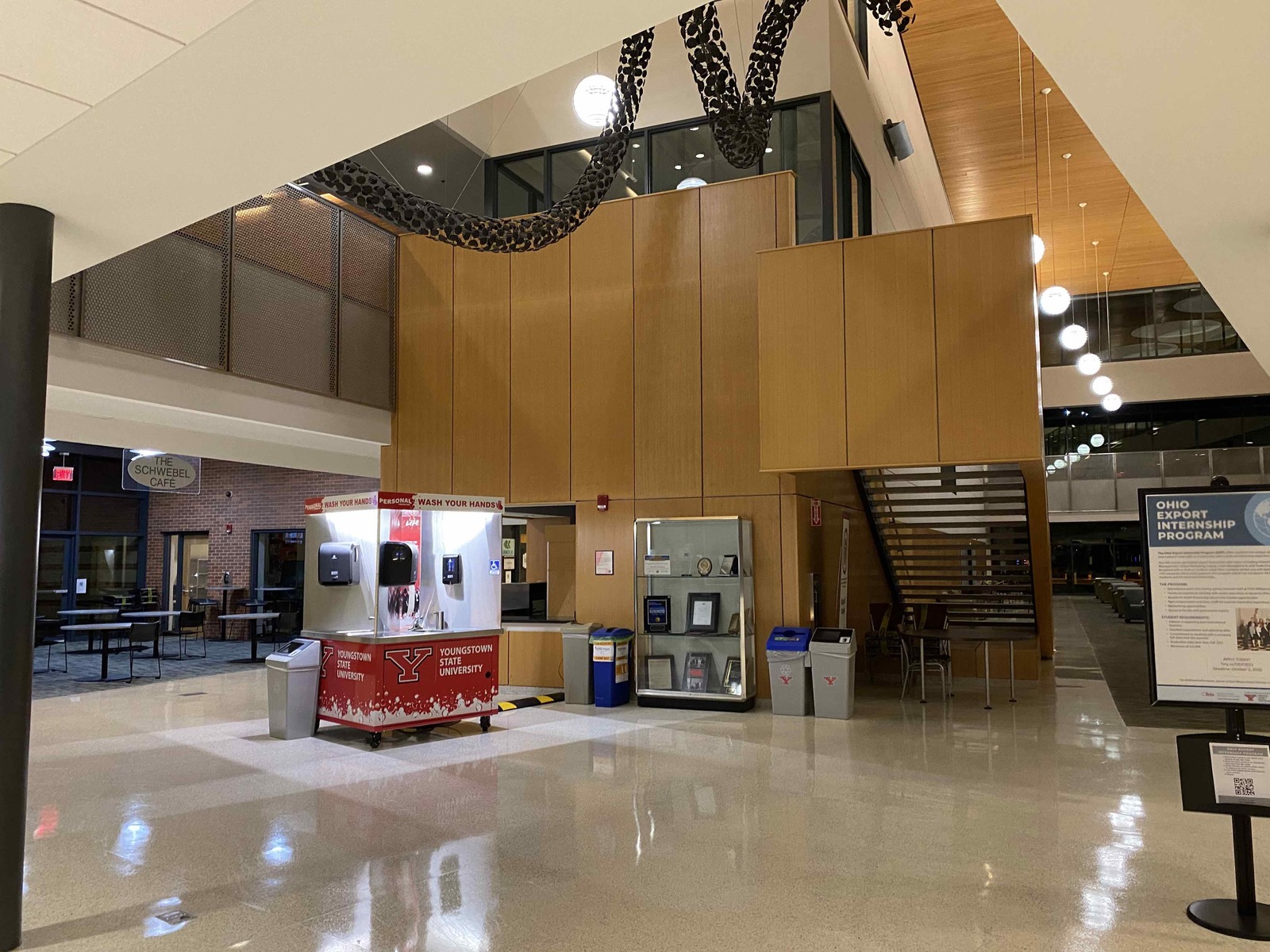 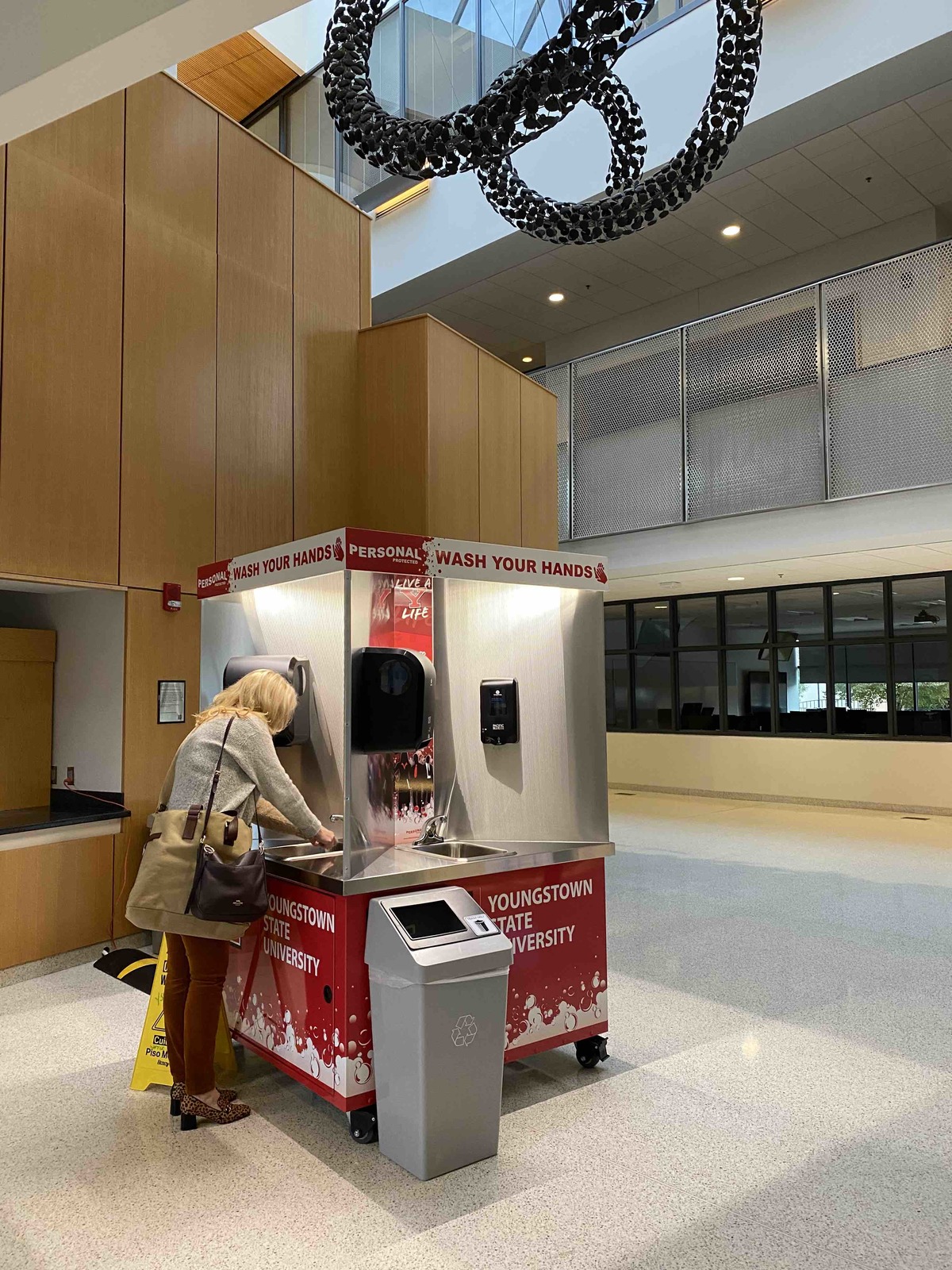 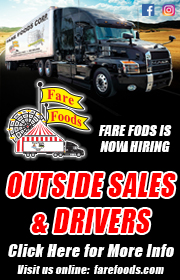