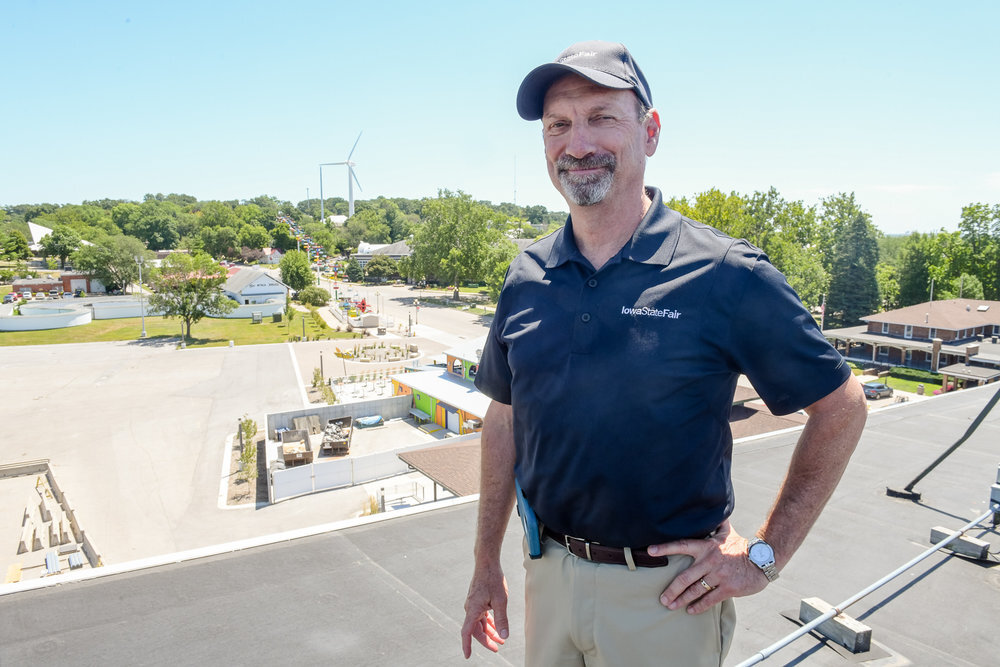 Few fairs gain the same level of global notoriety as the Iowa State Fair. Perhaps some fame comes from the fact that Iowa seems the state most emblematic of America's agriculture industry and heartland virtues, but since the 21st century began, few fairs have seen such a remarkable trajectory of growth.  The fair has sustained attendance exceeding 1.1 million since 2001, including breaking attendance records in 2019 and setting an all-time one-day attendance record in 2022.

Both leading this massive event, and an integral reason for its prominence in the industry, has been Gary Slater, who is retiring after 21 years as CEO and Fair Manager. Slater has spent his entire career working in leadership positions for large events including the Missouri State Fair, the World Pork Expo and the Iowa State Fair, where he has served since 2001. But it all started in Southeastern Missouri as a 4-H and FFA livestock exhibitor, and after graduating from the University of Missouri, Slater served as a livestock supervisor for the Missouri State Fair. Needless to say, fairs are in his blood.

‘If you build it they will come,” said the Iowan in Field of Dreams, and the main reason more and more people are coming in bigger and bigger droves to the Iowa State Fair is the extraordinary building and renovation program – one of the most extensive in the fair industry – that Slater has led, including new facilities such as the Susan Knapp Amphitheater and Mid-American Stages, Elwell Family Food Center and Elwell Family Park; Jacobson Exhibition Center; and Animal Learning Center and a fair-wide renovation agenda that ranged from admission gates to the grandstand and nearly every barn exhibit hall.

That vision has also included one that continues to reverberate among midway providers. Under his tenure, Iowa went independent, creating Thrill Ville and Thrill Town, two separate ride areas , all under direct contract with the fair. “Gary has led the fair through unprecedented times and brought about extraordinary improvements during his tenure,” said Tennie Carlson, Board President, Iowa State Fair. “Gary never wavered in his passion to make the Iowa State Fair the Iowa treasure we all know and love today. We congratulate Gary on a successful career and wish him and his family all the best in his well-deserved retirement.”

Carnival Warehouse: During your tenure, the Iowa State Fair first passed the one million mark and has sustained consistent growth for more than a decade. What was done differently by the fair to obtain this attendance level?

CW: One major shift for the fair was going to an independent midway in 2016. Looking back at this decision, why was it the right one for Iowa?

GS: Our long term contract was ending and we had the opportunity to make some improvements to the previous ride area on the ground.

CW: What improvements to the midway can you point to that were only possible because of an independent midway?

GS: We improved the infrastructure to the main midway (Thrill Ville) area and created a separate kid midway (Thrill Town). We devoted staff to the independent midway contracting and had the opportunity to build a custom ride and game area of the best of the best for our fairgoers. 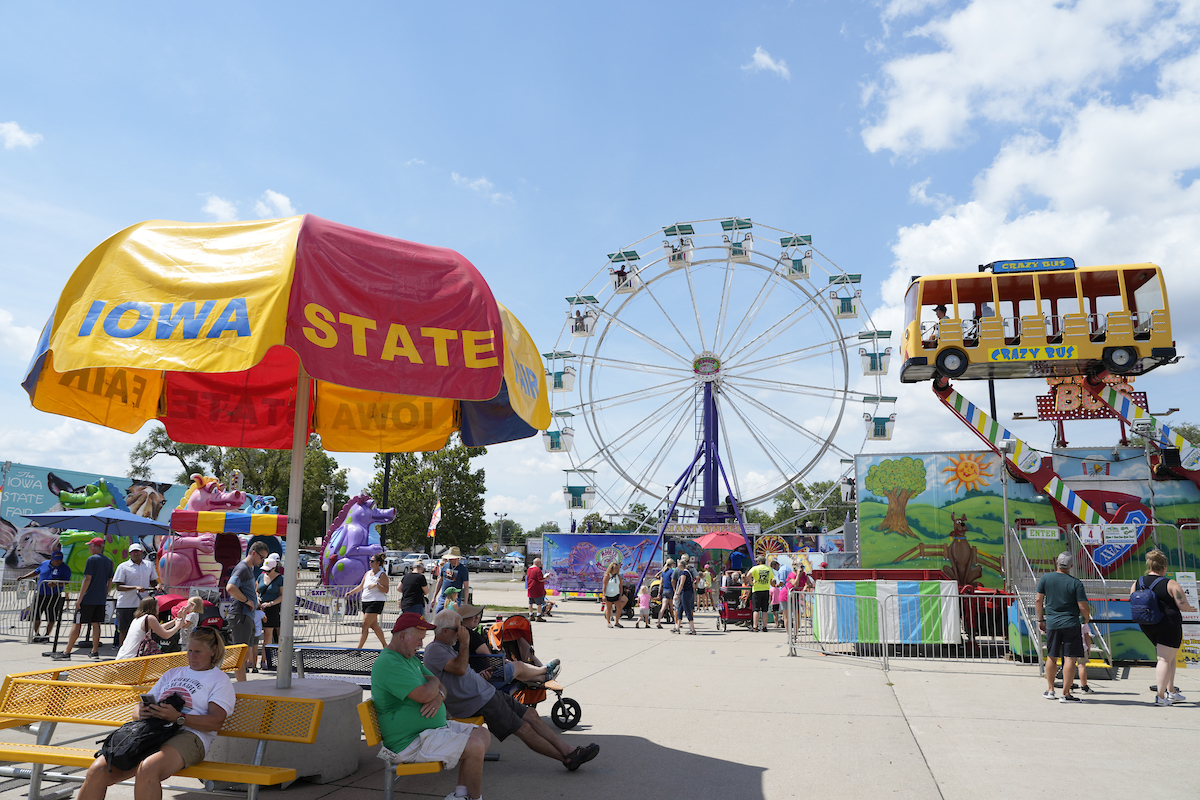 CW: How has the Cashless System  changed the fairgoer experience?

GS: The transition was seamless. Customers are more used to the system today, so the change was not a stretch for them.

CW: Is the system now gate to gate or still only limited to rides?

GS: Only our midway area is cashless.

CW: What is the future of cashless systems?

GS: COVID did change the pace of acceptance and use by consumers, but we still accept cash, credit, debit, Apple Pay and Google Pay.

CW: The Iowa State Fair is one of the most iconic outdoor events in the world, as CEO/Executive Director what are you the proudest of?

GS: So much has changed over the past 21 years, it is hard to name one thing, but overall, I am most proud of our investment in grounds improvements with over $150 million in capital improvements on the fairgrounds since 2001 to make the fairgoer experience better.

CW: How did COVID change fairs and the role of the fair manager, and what changes of those have the most permanence?

GS: COVID helped us look at our events and facilities, our grounds movements, lines, and spacing. Some of those changes exist today along with the continuation of additional cleaning in high touch areas. I also had bi-weekly Zoom calls with CEOs at other midwest fairs and although there aren't weekly calls anymore, we do communicate on a regular basis. 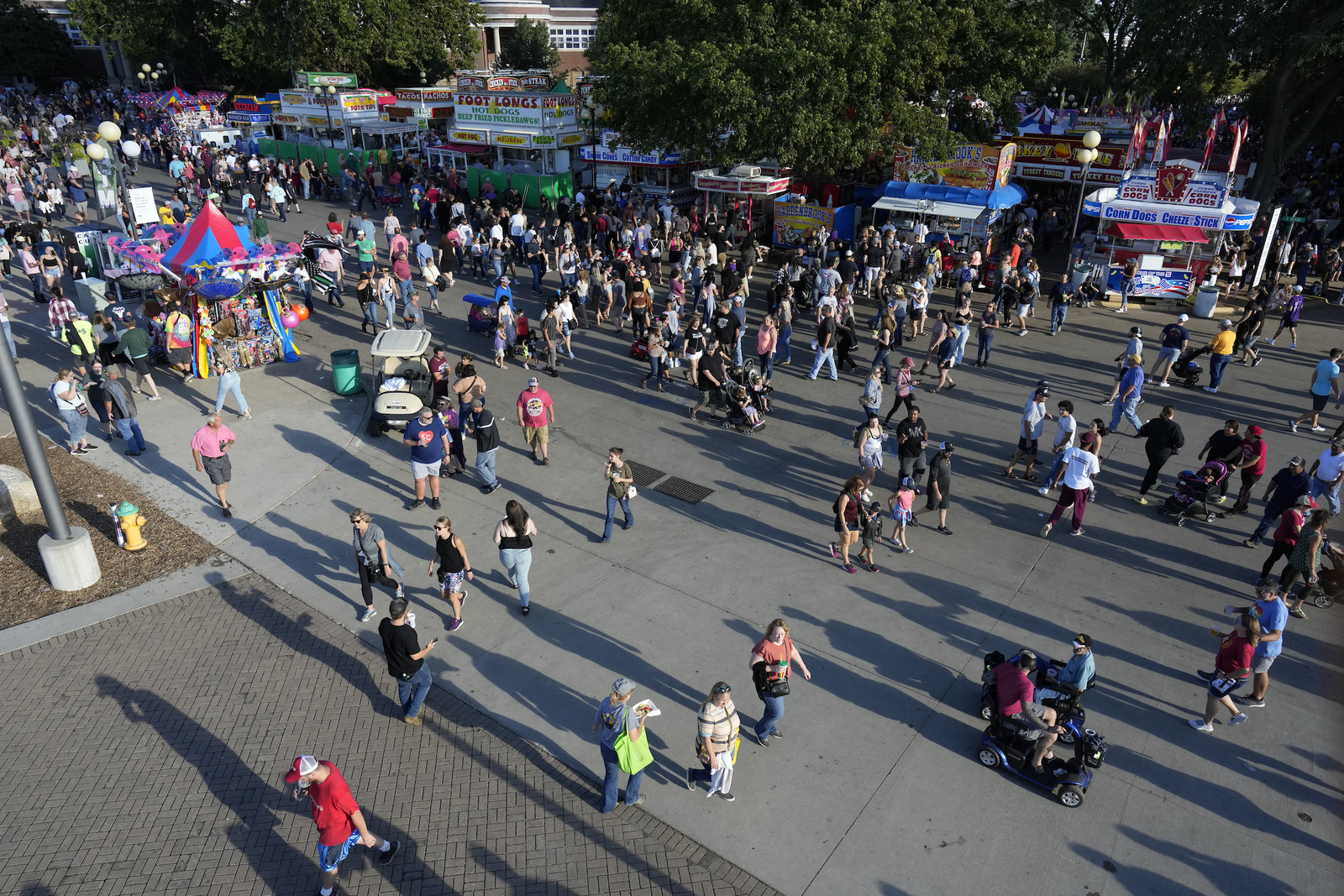 CW: What do you love about fairs?

GS: I love the diversity of fairs. You combine aspects of different things for different people from entertainment to agriculture to food. There is not just one specialty, so that diverse offering is what I like best.

CW: How are 4-H and FFA as relevant to young people in the community as they were back in the day?

GS: 4-H and FFA remain relevant today as we can see our youth numbers continue to climb each year. We have highly competitive shows that have prestige that is still sought year after year.

CW: What about being a fair manager is not just completely different but couldn't even be imagined when you began your career?

GS: Cell phones instead of radios for communication, cashless versus cash only and the biggest change is social media.

CW: How old were you when you went to your first fair?

GS: I was in preschool and attended the Pike County Fair near my hometown of Eolia, Missouri.

CW: What is your earliest fair memory?

GS: One of my earliest memories was when my cousin from Baltimore was visiting and my parents let her take me to the county fair. I remember riding the rides, maybe too many rides. 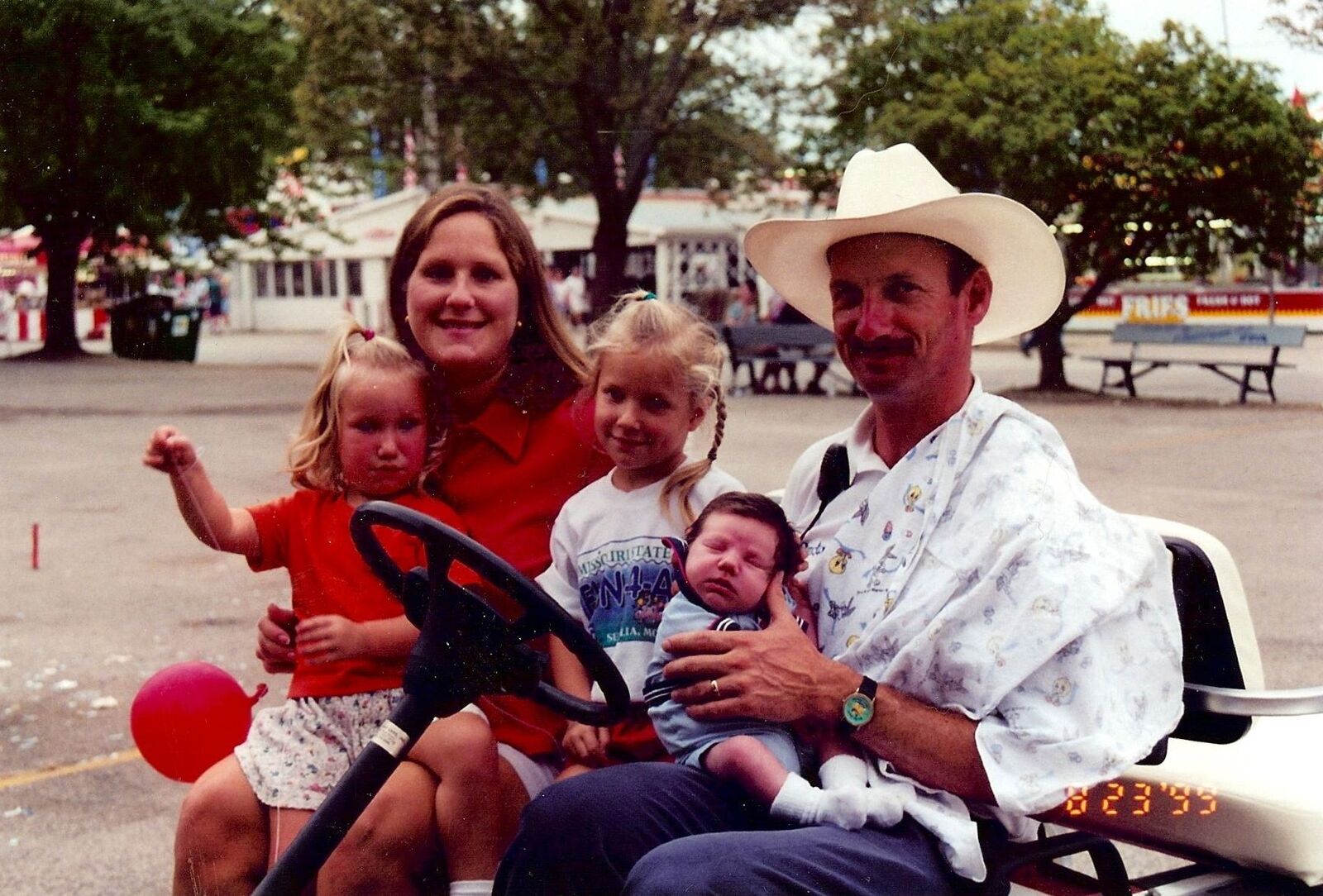 CW: What is your favorite midway ride?

CW: What is your go-to fair food?

GS: Hands down pork chops on a stick at the Iowa State Fair. I look forward to them and I usually have more than one during the Fair.

CW: What will you miss the most about being a fair manager?

GS: My fair family and the relationships and trust established. The people who are on the board, work at the fair or volunteer every summer. Also, the people who come to the fair and enjoy it.

CW: What will you miss the least?

GS: Meetings and responsibilities that keep you from enjoying time with your friends and family.

CW: As a fair manager, you deal with all the fair stakeholders – government, agricultural industry, sponsors, vendors, etc. etc. – which group is the most problematic to deal with, or the most pivotal for a successful fair?

GS: I am especially proud of the relationships and trust that we have established with all of our stakeholders. It hasn't always been easy, but we have great relationships with our donors (big and small), the State Legislature and Governor's office, Des Moines City fathers, the Convention and Visitors Bureau, and Public Safety Departments throughout the metro to name a few. 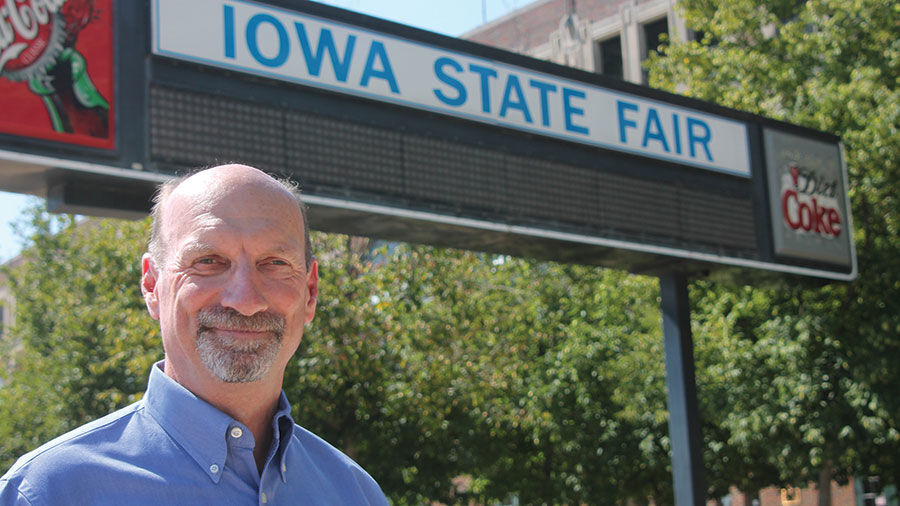 CW: What advice would you give young people interested in the becoming fair managers and/or entering the fair industry as a career-choice?

GS: Event management is rewarding when people come to see or eat or experience their favorite things at your event. It is hard work and you have to be flexible, but the rewards far outweigh the challenges along the way. You have to have a passion for it.

CW: One other development occurring concurrent to your career has been the growth of the fair industry nationally and the creation of true network of fairs through the IAFE and other organizations. How did this impact the Iowa State Fair and decisions you make?

GS: The networking, idea exchange and camaraderie have been historically important at the Iowa State Fair. The Iowa State Fair is very involved in the IAFE and three former CEOs have also been President of the IAFE. We belong to multiple associations including the IAFE to make our fair stronger.