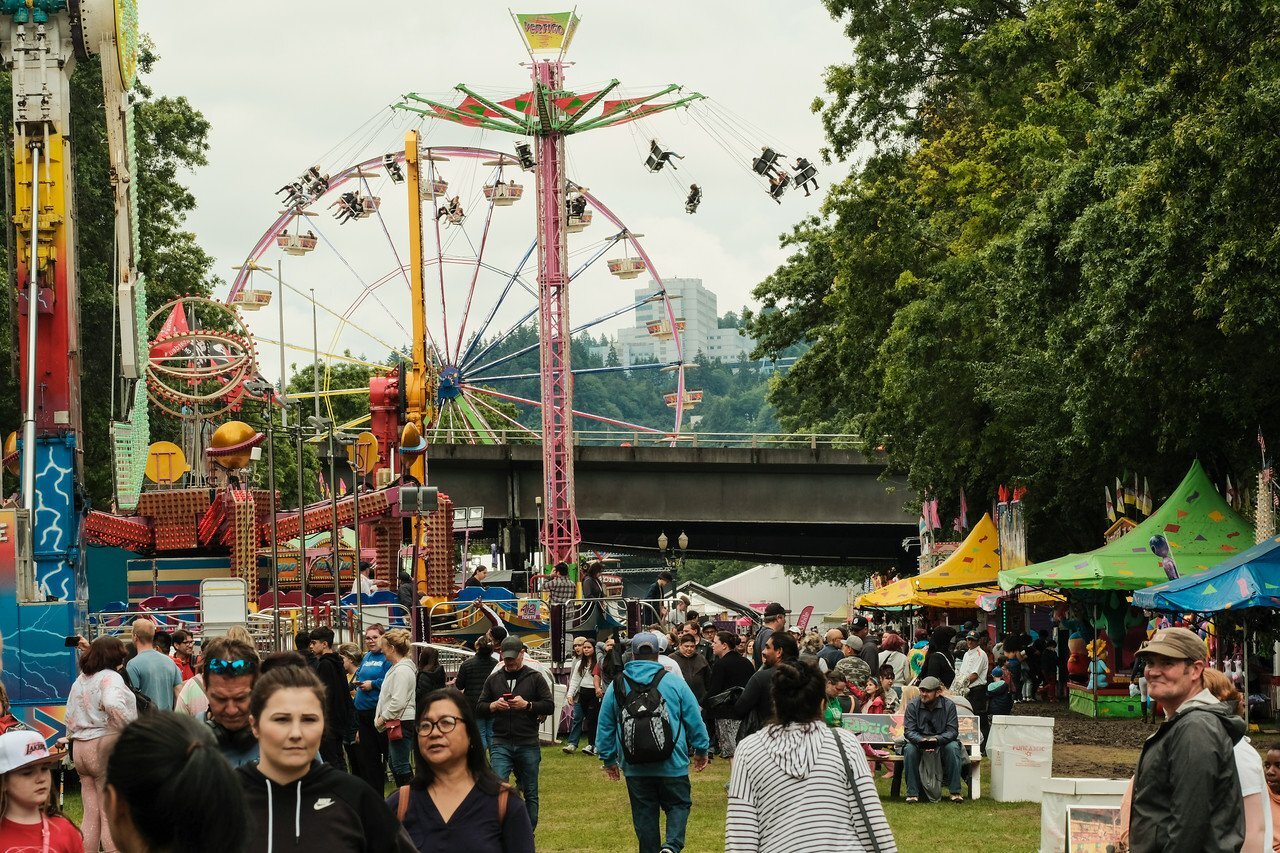 The Portland Rose Festival – the carnival attraction portion of which is known as the CityFair event – had a few soggy thorns in its celebration this year. A deluge of rain put a damper on the event's return after a two-year pause due to the COVID-19 pandemic.

But despite having a literal wet blanket, the fair went on. CityFair took place at Tom McCall Waterfront Park, featuring live music, food booths, kiddie attractions, and carnival games and rides. Running May 27 through May 30, June 3-5, and June 10-12, gate admission was $10 for those age 7 and above. Kids age 6 and under were free with an adult admission. Buying and wearing the 2022 Rose Festival Souvenir Pin allowed unlimited admission to the fair; it cost $15 online or $20 at the gate.

This year, the fair was dubbed “Rose City Reunion” after the long pandemic hiatus.

The carnival rides and games were provided by Funtastic Traveling Shows. According to Ron Burback Jr., the inclement weather was almost as bad as COVID. “We received rain on all three weekends with over 1.3 inches of rainfall on the last Friday.”

That's a lot of rain, even for Portland area residents who are used to it. Rose Festival and CityFair public relations manager Rich Jarvis related that seven docked U.S. and Canadian Navy ships and all the excitement of the festival and fair's return still wasn't enough to bring people out in the deluge. Terming the rain storms a torrent, he noted that nonetheless the 115-year running Rose Festival managed to stay afloat. 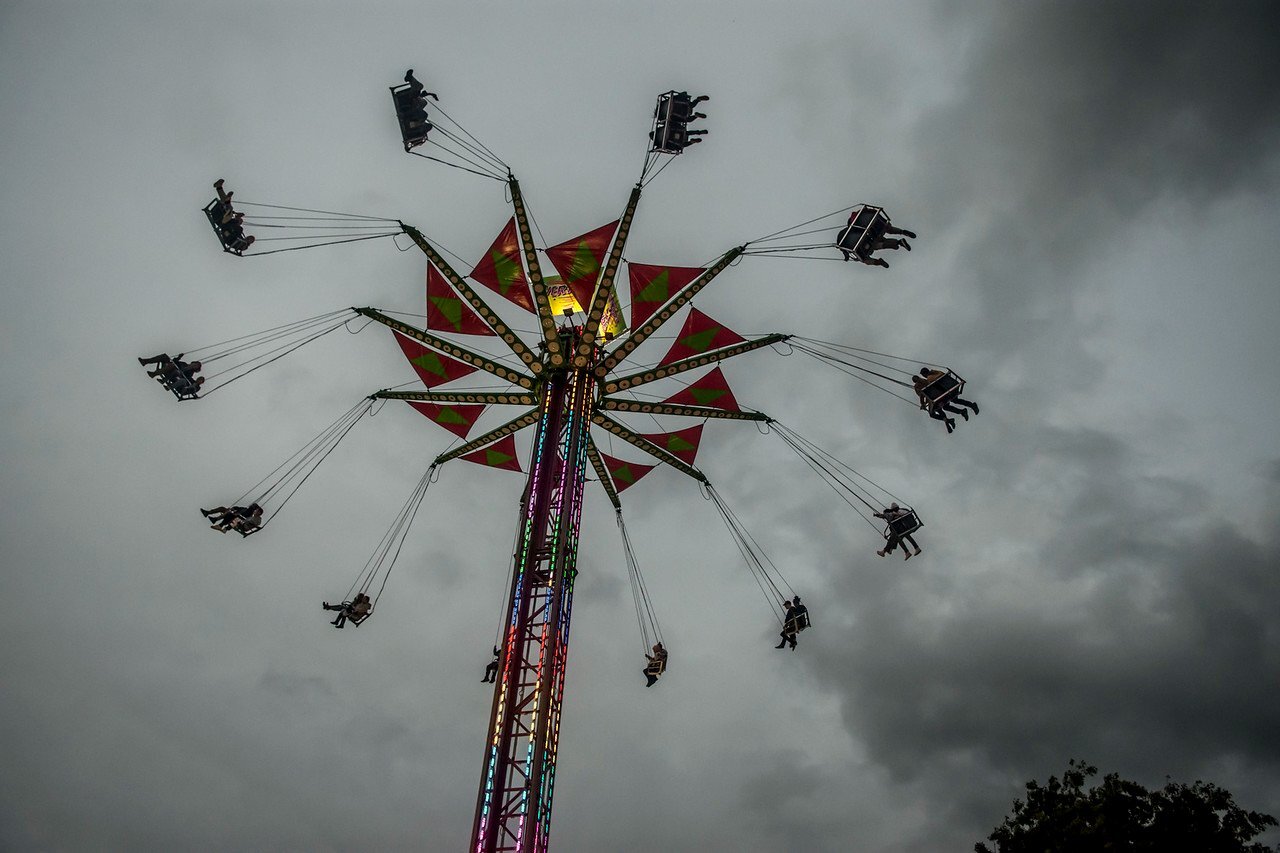 Located at the half-mile long waterfront park, he described the location as ordinarily being quite appealing in itself. “It is sometimes referred to as the front lawn of Portland. This allows for the United States Navy fleet to dock right at the park next to the carnival setting. This also allows for a great fireworks show over the river,” Jarvis explains.

The official city festival's fair is divided into sections by the iconic Morrison Bridge, with the ride midway and the food areas on either side.

Funtastic offered 22 rides, mixing thrill rides with kiddie rides; they also provided seven food stand concessions and 15 games. Among the most popular rides were the Grand Wheel from Chance Rides and the ARM ride favorites Vertigo and Rockstar.

Despite the weather, carnival revenues were up this year, Burback says. It is the 18th year that Funtastic has worked with the event. He describes the festival team as “just a great civic minded bunch of Portlanders putting on the greatest event in the city.”

Funtastic Shows carnival rides were sold only onsite; there were no advance purchase and no ride wristbands. Rides in general took up to 12 tickets per ride; prices in cash were $20 for 34 tickets; $40 for 68 tickets; $60 for 120 tickets, and $115 for 250 tickets. Paying with a debit or credit card added a '$1-$1.50 processing fees per transaction depending on overall ticket cost.

Along with the carnival, the Rose Festival also offers parades, the Navy ship viewing, and a treasure hunt: The Rose Festival Treasure Hunt Sunday, May 29, led participants via clues to find a small block of Lucite embedded with a Rose Festival Medallion. The big winner received $500.

The parades included the CareOregon Starlight Parade, an illuminated evening event on June 3rd; and the daytime Spirit Mountain Casino Grand Floral Parade – all floral floats, equestrians, marching bands, and more on June 10th. Kids had their own event on a weekday: the Fred Meyer Junior Parade, which encouraged participation as well as viewing on the 7th. 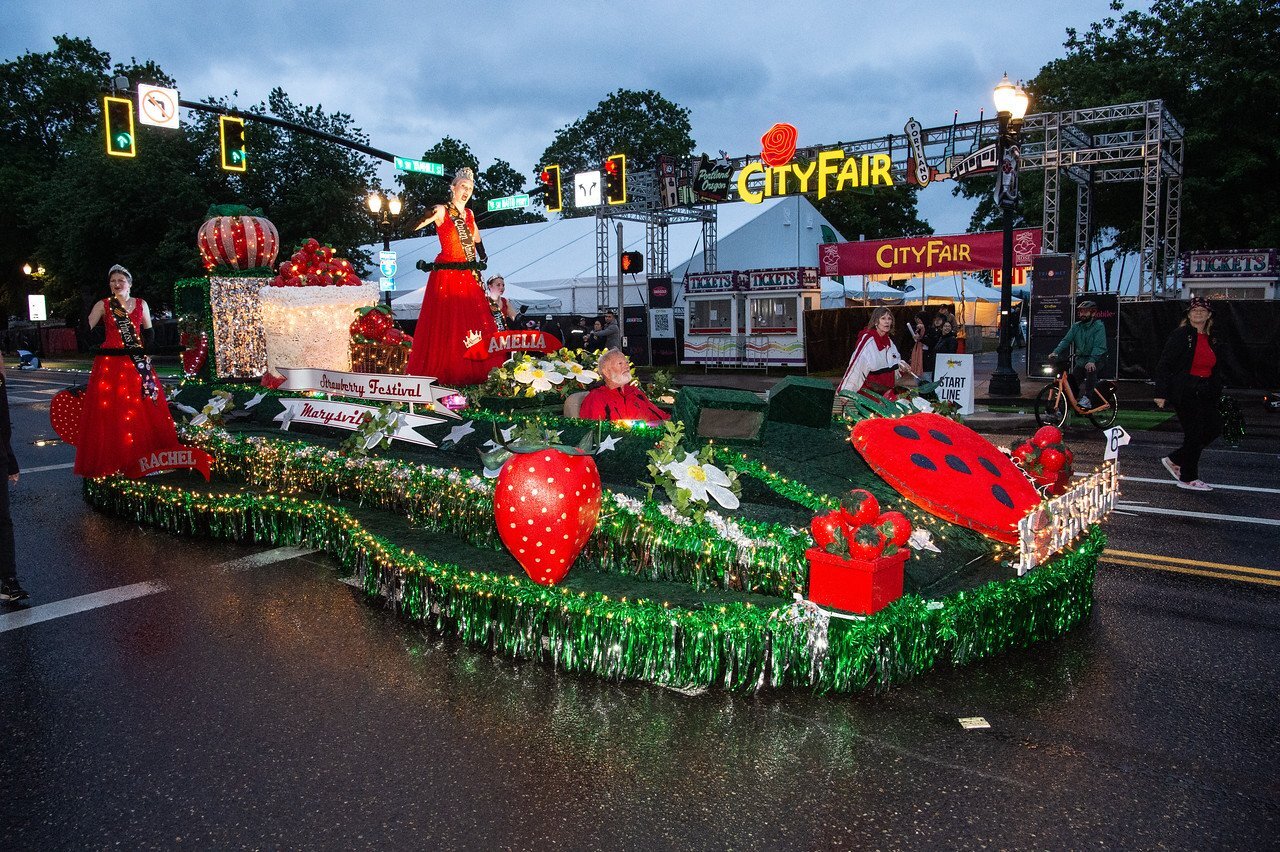 And of course, there was music. The festival opened with a concert by the Oregon Symphony, the first in 30 years. Other performers included The Junebugs & Hit Machine plus fireworks; a Pacific Island Celebration & Ukulele Jam featuring Andrew Molina, Caribbean Night with Conjunto Alegre, and a “Good in the Hood Meets City” performance. Also on hand was a Kids, Clowns & Characters show matinee.

The Rose City Reunion concert presented by Bank of America, with the Oregon Symphony, featured a premiere of an original festival kick-off “From One Rose,” on May 26, ahead of the CityFair portion of the Rose Festival. The concert moved from the outdoor RoZone venue indoors to the Arlene Schnitzer Concert Hall due to the soggy weather.

Speaking of kids, the kid's zone provided free themed arts and crafts and entertainment events each weekend, Around the World was the first weekend's theme, Heroes and Villains the theme June 3-5, and Fairytales rounded out the fun for little ones on June 10-12.

Other events included Artslandia Stage cultural performances and acts such as jugglers and acrobats; a display of Rose Festival History from the Jim Neill Memorial Museum; Tribute wine at a river view lounge; barrel beer brews near the Rose City stage at the Rose City Taphouse, and classic arcade and pinball at just a quarter a play at the Game On Arcade.

As to the festival's origins, the festival was first held in 1907. Portland itself is known as the “City of Roses” due to a climate good for growing the flowers. The non-profit Portland Rose Festival Foundation not only promotes and organizes the festival and CityFair but supports other arts, culture and volunteerism.

All in all, rain or fair weather the show did go on, dripping petals and all.