From Mini-Fair to May Fair, South Florida Doubles Down in 2021 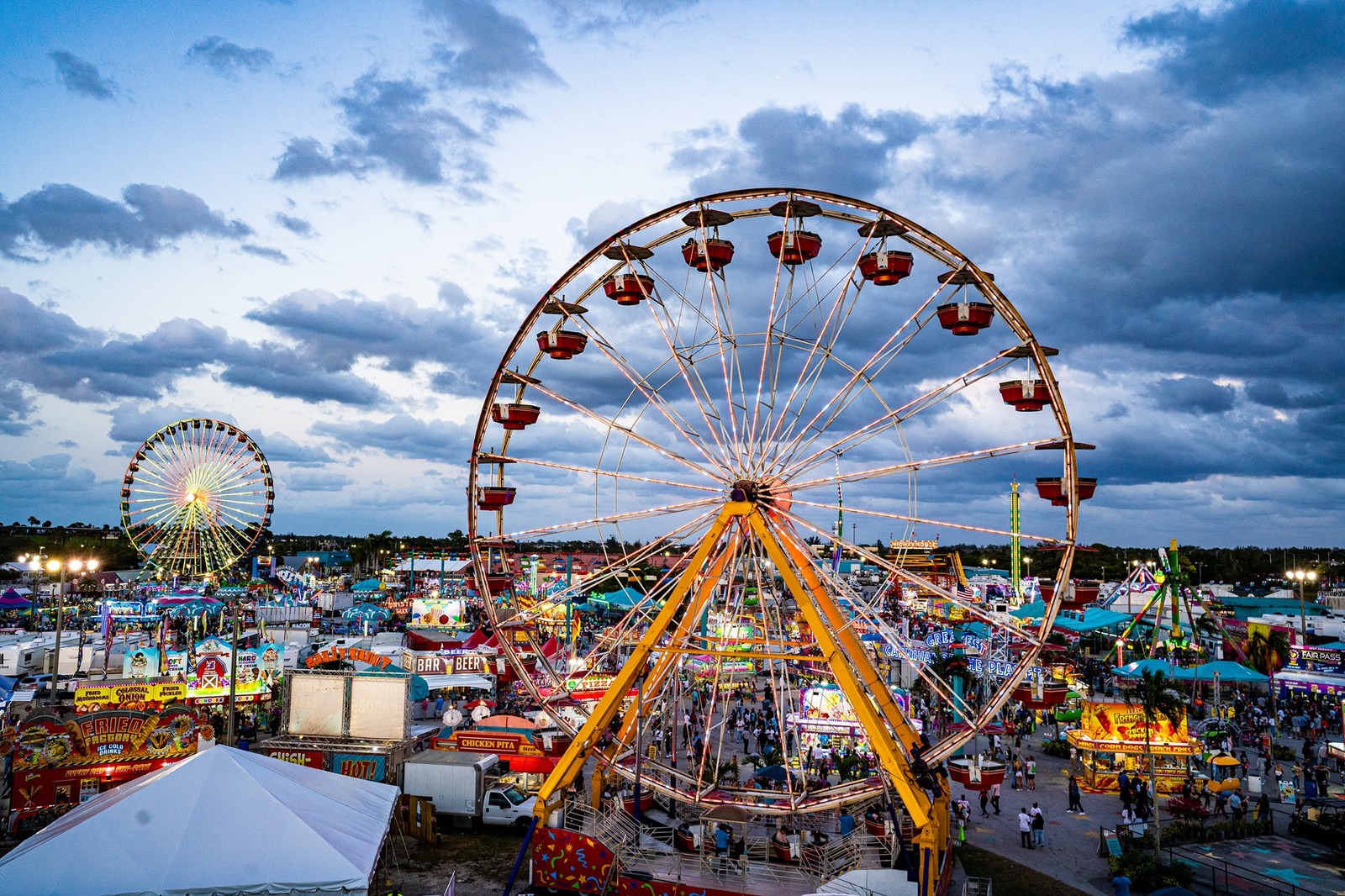 Many fairs in the first two quarters of 2021 made one of two choices, cancel or reschedule to later in the year. The South Florida Fair found a way to do both.

Instead of no fair or a later fair, the South Florida Fair downscaled the event held in its traditional January 17-day spot, then produced a larger, more full-sized fair May 7 -23, accomplishing something unique its 109-year history, hosting two fairs in a four month period.

What seems even more astounding than just hosting two fairs, but planning these co-events in an abbreviated time frame, less than six months compared the usual 12 months for the pre-pandemic fair. The 2021 South Florida Fair experience is a testament to an organization's ability of being flexible enough to adapt to a rapidly evolving situation through creative problem solving and strong partnerships, especially between fair manager and midway provider.

Obviously, the fair board didn't want to cancel the 2021 fair, but with COVID spikes in 4th quarter 2020, and then the news that the Florida State Fair was rescheduling the event to April, the fair needed to reconsider the looming January event and the possibility of a steep attendance decline, severely eroding their return-on-investment.

“We realized producing our “normal” South Florida Fair would have more challenges than we may be able to overcome,” said Vicki Chouris, President & CEO, South Florida Fair. “About four weeks out in mid-December, the idea occurred to me that we could possibly do a smaller version of our Fair in January, one that would attract less people but also allow us to generate enough revenue to retain our employees as we had since the pandemic began. The recommendation to do two fairs was supported by both our Board of Directors and our tremendous staff.”

An innovative, bold solution – especially considering that when the decision was made, contracts for one fair, a full event in January, were already being processed and needed to be rescinded and renegotiated – but two fairs also means two midways. “My first call was to our midway partner, Frank Zaitshik of Wade Shows asking him if he would consider just bringing kiddie rides to the Fair in January. He immediately responded yes. The next decision was to ask each of our food concessionaires if they would participate with one food stand. The concept behind this was getting as many people back to work as possible. With limited space, one stand from each vendor could accomplish that and allow everyone to make some revenue.”

The January fair was rechristened as a Mini-Fair, a promotional campaign that that would push the rescheduled, full-scale South Florida Fair while emphasizing that this stop-gap event was fully compliant with CDC guidelines and protocols. “We certainly did not want to be viewed as a super spreader event and destroy our reputation in our community. Our goal in January was to attract as many attendees as we could, but to also keep the attendees and the stakeholders safe.”

The Mini-Fair was entirely outdoors – no exhibit halls or other indoor facilities were utilized – and the midway had no Spectacular Rides, only about a dozen kiddie rides and a few other pieces. “Experience told us that [Spectacular Rides] draw the larger crowds and also attract the age group that was more resistant to the wearing of facial coverings,” said Chouris.

Four months later, “May was different. Our May Fair was much the same as the traditional January Fair. All the buildings were utilized. The rides and food were full capacity and the Exposition Hall was featured. We did limit our entertainment offerings to local performers with the focus on tribute bands, but the South Florida Fair in recent years has not really been a national artist showcase. One element of our Fair that we did not have at either event was our daily Mardi Gras parades. This decision was made to avoid the gathering of large crowds along the parade route. We did have our annual Mayor's Parade in May in which Mayors from 20 of our 37 municipalities participated.” 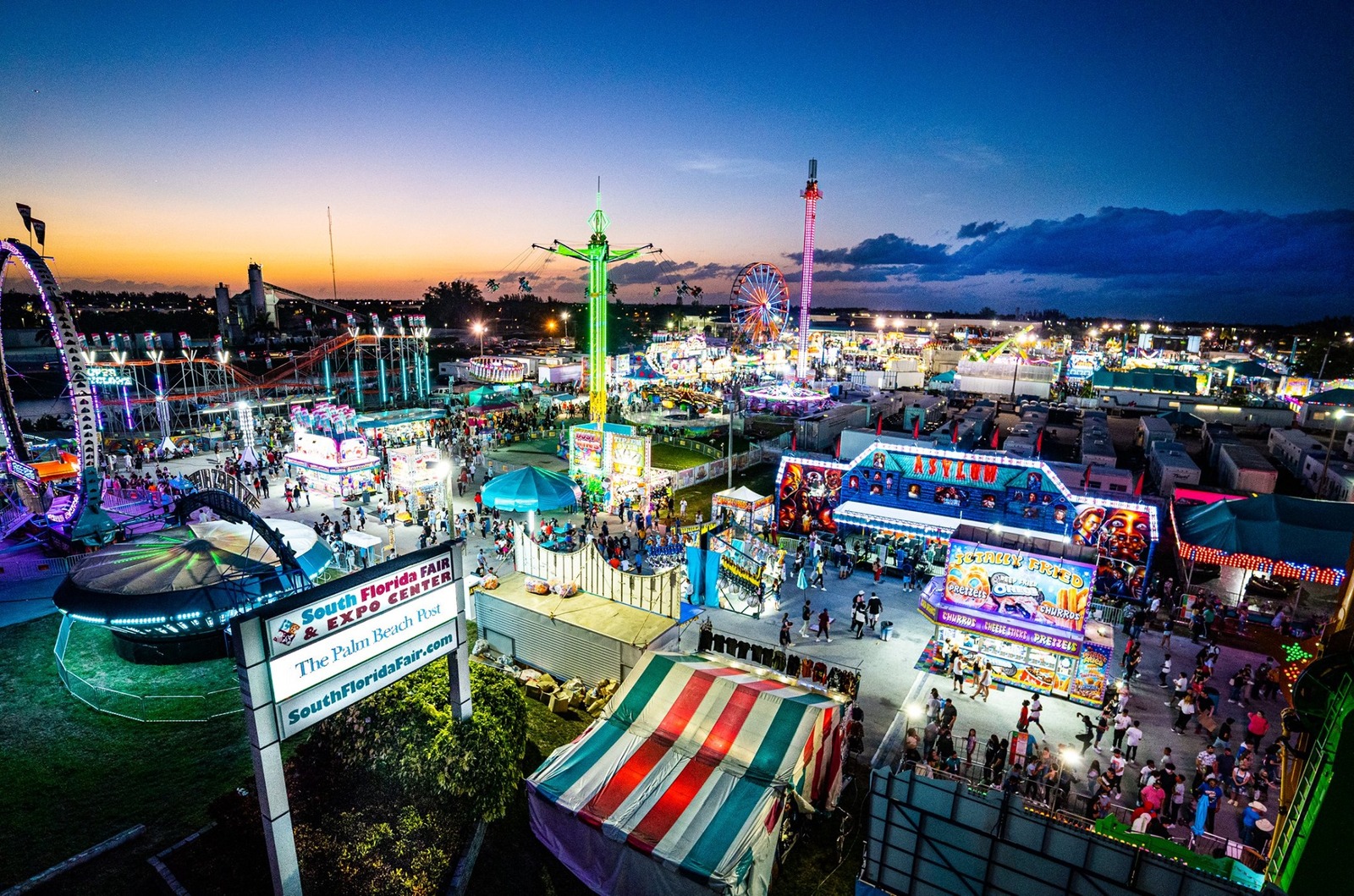 “It went so well I think we should've done three,” joked Zaitshik, who said that from the very first phone call with Chouris, Wade Shows was “supportive. I was watching the headlines and all the media coverage and a fair the size and magnitude of the SFF in January would be a challenge.”

By May, as vaccines became more widespread and restrictions were lifted, the fair environment was much improved. “It came off very well, beyond my expectations. A larger portion of the visitors were vaccinated, everyone was very up-beat.”

According to Chouris, while final attendance figures are still being tallied, attendance for both fairs was only “slightly lower” than the 2020 fair, which was a record year.

But Zaitshik pointed out that the “midway per capita was an all time high which continues to validate the public's approval and satisfaction with the fair experience and the Wade Shows mix of equipment. We not only had record ride per caps, the last Friday was set an all-time record for last Friday. On Saturday we beat the five year average for the last Saturday.”

Wade Shows faced two major challenges in making the May fair a success – labor and time. Like most carnival companies in 2021, sustaining an adequate force has been an ongoing problem.   Understaffing has become very challenging throughout the industry.

Wade Shows was “capped out” for this fiscal year's second allotment of guest workers, which usually arrive the first week of May.

As one of the first gigs of the year, Wade Shows usually arrives 14 days before the South Florida Fair opening. But the Winter calendar is far less filled out than the Spring portion of the route. Wade Shows only had four days to set up, get inspected and open. “It was a very big challenge.  We had a very limited window to work. I'm very proud of our team, and the fair did a remarkable job.” 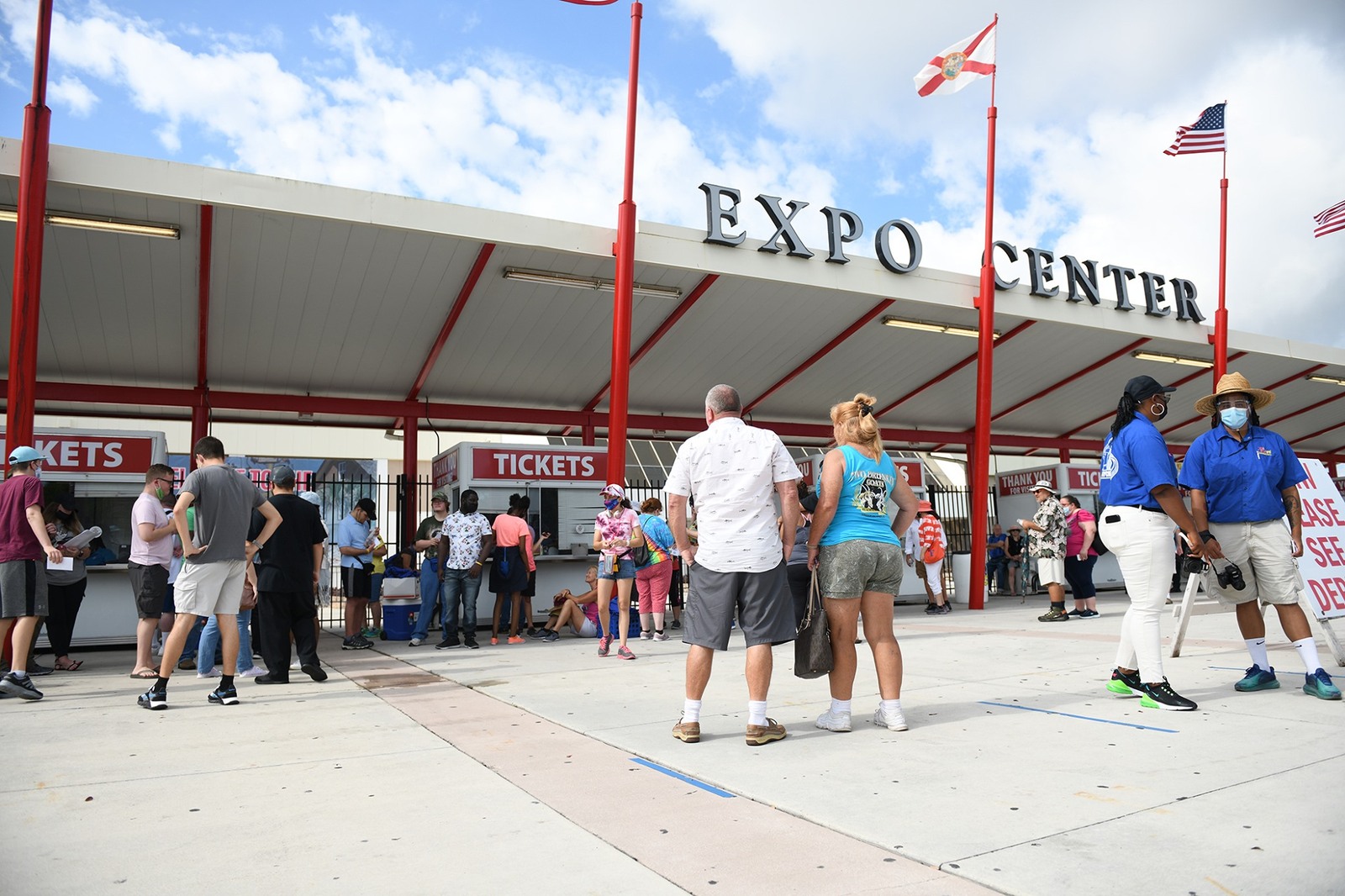 The fact that midway spending and per-caps were particularly robust, setting midway records, although attendance was lower, indicates that the fair attracted a mainly loyal following. snowbirds – who usually flock to Florida from Canada and northern States – were an endangered species due to COVID limits on travel, an economic recession and a lack of travel enthusiasm during lockdown. The other customer category that under-performed in 2021 were senior citizens.

“In looking at the attendance makeup of both of our fairs, it appeared to be the same audience we always have with the exception of our senior attendees,” said Chouris. “Many people in this age group did not come to either event which was really not surprising. In January, the risk of exposure to COVID was a factor and in May, the heat was definitely a consideration. But, although the temperatures for the first 4 days of the May Fair were record highs, the weather actually was very beautiful for most of the full 17 day run. We had one day of rain and that was one of our weekdays. The wind kept it cool enough that people were able to enjoy the evenings at the Fair.”

Another sign of a return to normalcy was the 2021 theme for the May edition of the fair –“An Earthly A-Fair,” which showcased exhibits and interactive activities relating to the earth and conservation, including Hurricane-Mania, Dynamic Seas and Earth from Space, and environmental movies. The fair's marketing budget had to be split between two fairs -- during a time when cuts were being made throughout the South Florida Fair – and the marketing incorporated a greater social media presence.

“When the decision was made to have the Mini Fair, we knew our attendance would be less than normal, so we had to scale back on expenses,” she said. “We eliminated all television advertising and only promoted the event through radio, newspaper, billboards and social media. In May, we ramped back up and included television, although it was about 80 percent of our regular spend.”

She added, “social media was the driving force for promoting the fair in May. Our fair customers shared the news about the event and thankfully, most did it with a positive message.”

The South Florida Fair made history in 2021 – it's believed to be the first time two fairs were held in four months – and even though attendance combined was only comparable to one fair – the endeavor received community support. Ironically, one of the few fairs to be held in 2020 became two fairs in 2021, but thinking outside the box seems to have been vindicated.

“January 2020 was one of the best Fairs in our history so being even close to having as many people attend during a pandemic was quite an accomplishment,” she said. “People were ready to get out and enjoy time with family in a “normal” setting. This pandemic made us all realize things will not always be the same. We are fortunate we had the ability to change gears and adapt our event to succeed in an “unknown” environment.” 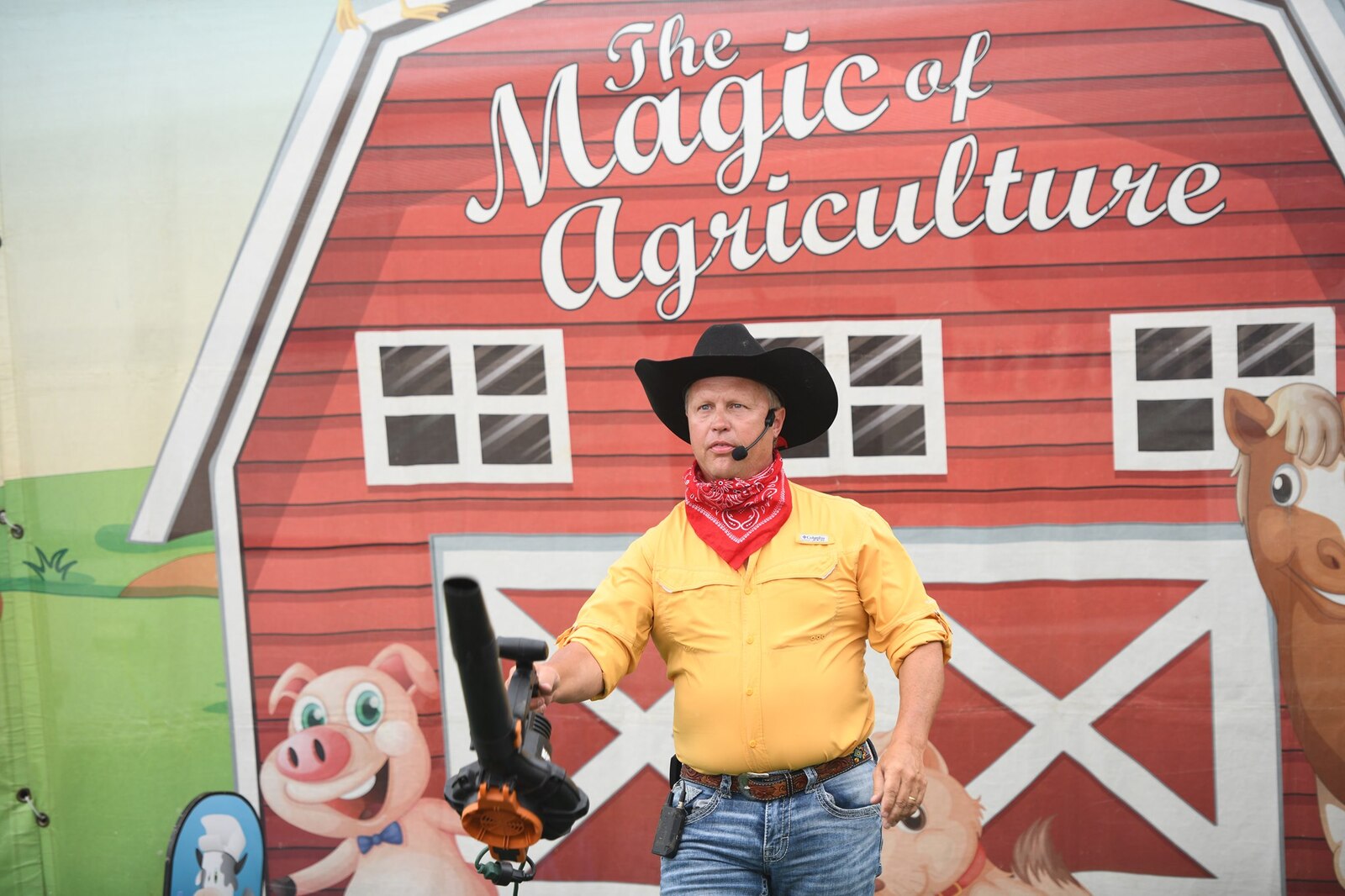