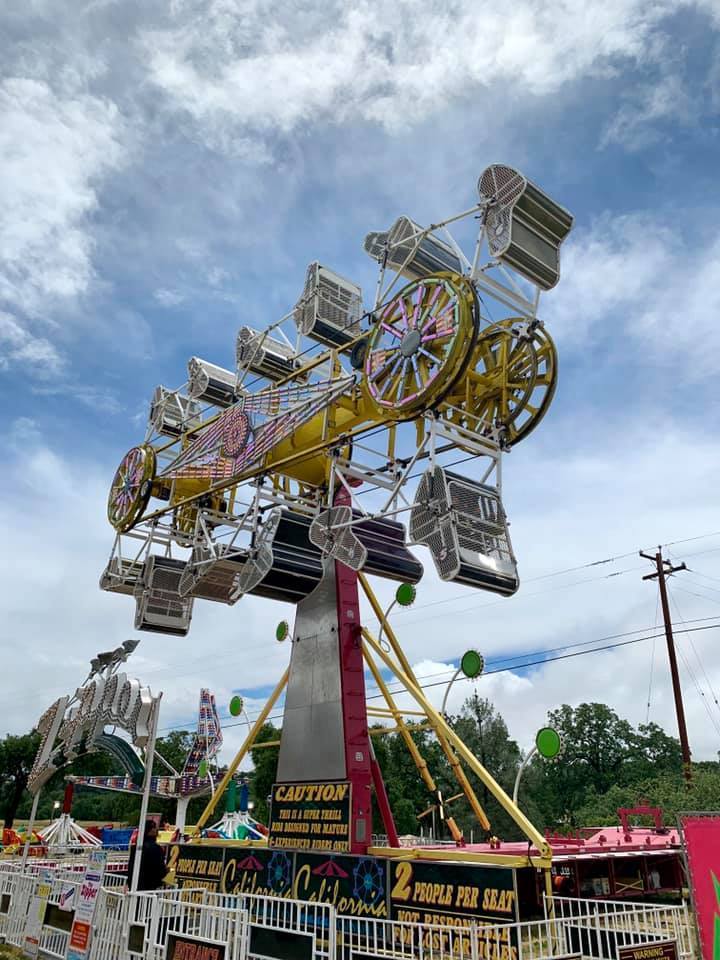 The Calaveras County Fair and Jumping Frog Jubilee runs four days annually on the third weekend in May – and for 2019, despite some bad weather, it was leaping with fun, according to Calaveras Fair CEO and fair manager Laurie Giannini.

The long running event began in 1893. “It's one of the longest running consecutive events in the State of California,” she relates. “Our signature event, the Frog Jump, began with a story, the Celebrated Jumping Frog of Calaveras County written by Mark Twain.”

The event is an opportunity for journalists from all of the world to celebrate the town's tradition; the fair has been featured on the Tonight Show, Huell Howsers' California's Golden Fairs, The Discovery Channel, and Larry the Cable Guy's Only in America.

This year, four days of rain dampened attendance but not spirits. Giannini reports “I am very proud of our carnival operator which is California Carnival. The carnival was very professional and only shut down rides that were dangerous in the wet weather and that was only temporary. We weathered through it together.”

She adds that “The most popular ride was the Zipper.”

Because of the weather, Giannini notes “Attendance was half of normal - about 19,000.”

Despite that “The frog jump went well and the weather did not stop most of our competitors. The winners of the Frog Jump were 11-year-old twins.”

Located in the Gold Rush-era town of Angels Camp, the international event starts with a home-town children's parade in the historic downtown. The frog jump occurs on each day of the event, with the last day presenting the frog jump challenges including the International Frog Jump finals.

The event also includes the carnival rides, livestock competitions, food and wine samples, and fair food favorites. On the final evening of the fair, the Destruction Derby takes places.

Giannini describes the famous Frog Jump as drawing an average 2,000 frogs. “Only the top fifty frogs qualify for the International Frog Jump Grand Finals, which are held on Sunday of the Jubilee. The current world's record was set thirty years ago in 1986 by Rosie the Ribeter. Rosie jumped 21′ 53/4″.” This year's winners, The Webbed One, jumped by Logan Busch, made an 18' 6” jump; Madison Busch's Jumping Jack Flash came in at 18' ¾”.

This year's theme was “Be a Kid Again,” Giannini relates.

And kids themselves were encouraged to enjoy themselves – frogs and all. The Jump Start Program encouraged new participants by providing everything they needed to compete as a team. For a fee of $75 each, Jump Start Teams of two to six people receive not only jumping rights, but also free admission to the fair the day they compete. Regular fair admission ranged from $11-$15; weekend passes were $37.

The Calaveras County Fair and Jumping Frog Jubilee is the largest annual event in the county, and is takes place on 71 acres that include 4 community buildings.

But it is perhaps its heritage in frog jumping from a literary icon that it is best known for. A story about frog jumping inspired Mark Twain's first published work; the event became a part of the fair in the 1930s.

The Frog Jump Competition begins on Thursday, when contestants can choose to jump for fun on Rosie the Ribeter's Stage, or jump on the main stage to qualify for the finals. Jumping continues on Friday, Saturday and Sunday morning.  The top 50 jumps from the four days are entered into the finals. But it's not all hard work for the frogs – they live in the “frog spa” while competing, a frog oasis dedicated to the humane treatment of frogs and regulated by its own Frog Welfare Policy adopted by the 39th District Agricultural Association. The jump is run by volunteers who meet monthly throughout the year to plan the competition; Giannini fields requests to participate as a volunteer.

Contestants can bring their own frog, or use one of the local California bullfrogs collected and housed at the frog spa. The spa is also open for daily tours.
Winners receive a cash prize, a brass commemorative plaque embedded in downtown Angels Camp's Frog Hop of Fame, and their own commemorative trophy.

The brass plaque is engraved with the winner's name, frog's name, the year and the distance of the jump made. Should a contestant beat Rosie the Ribeter's record, the winner would also receive a $5,000 prize.

While the frog jump remains the top draw at the event, this year other popular entertainment included a Hillbilly Silly Science Show; Captain Jack Spareribs Pirate Show; and crafts on exhibit at the home arts building.

Each day at the fair included special events this year. On Thursday, kids could jump frogs for free and were admitted free under the age of 12. Friday, called Buckaroo day, celebrated all things country; Scooter Jennings performed that night. Tickets for the concert were free with the price of admission. Saturday marked the solute to First Responders, and the CCPRA Pro Rodeo was sponsored by Higgins Ranch and produced by Rocking M Productions. Sunday, along with the frog jump finals, the Destruction Derby took place in the very rain-muddied arena, produced by Moonbash Motorsports.

Popular foods included hand-dipped corn dogs; strawberry and sugar topped funnel cakes, and hand-dipped cheesecake on a stick, dipped in chocolate and sprinkles.
There were over 7000 exhibits on display, and the junior livestock auction generated approximately $630,000 dedicated to youth services in the community. 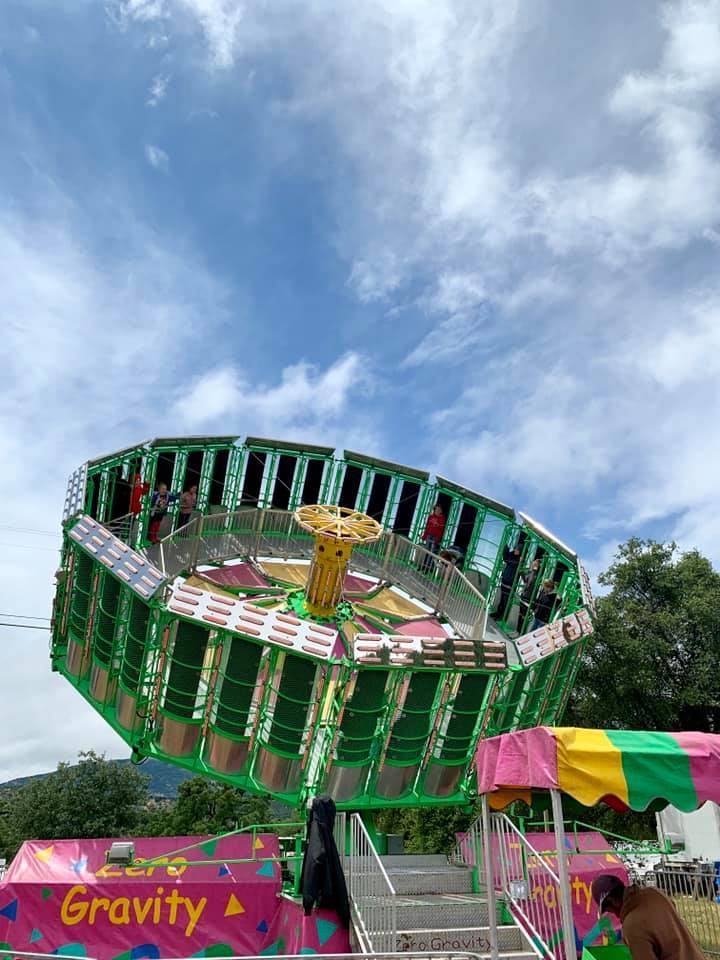 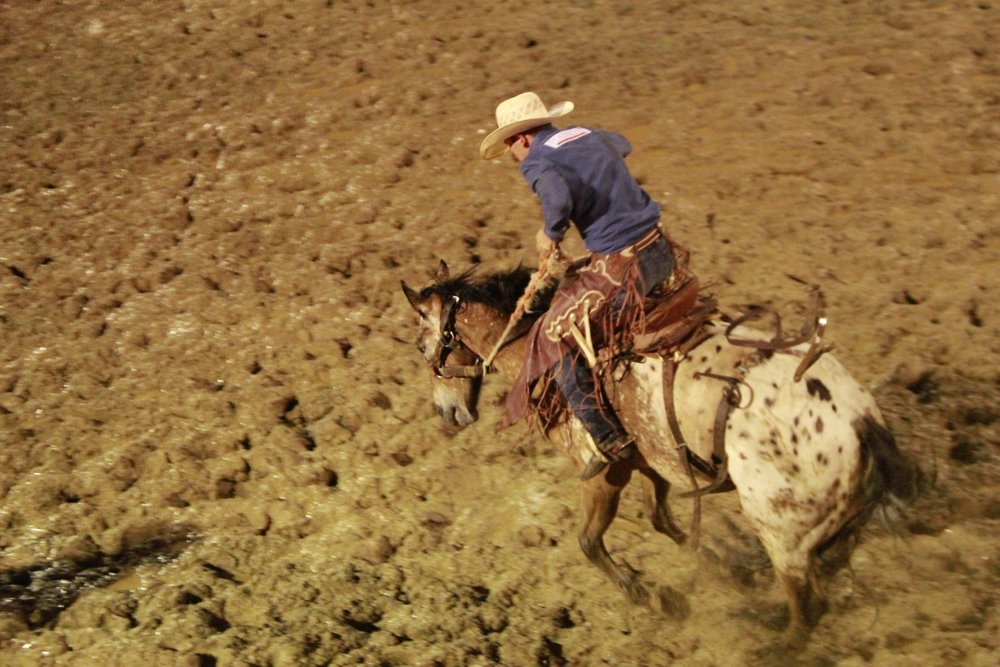 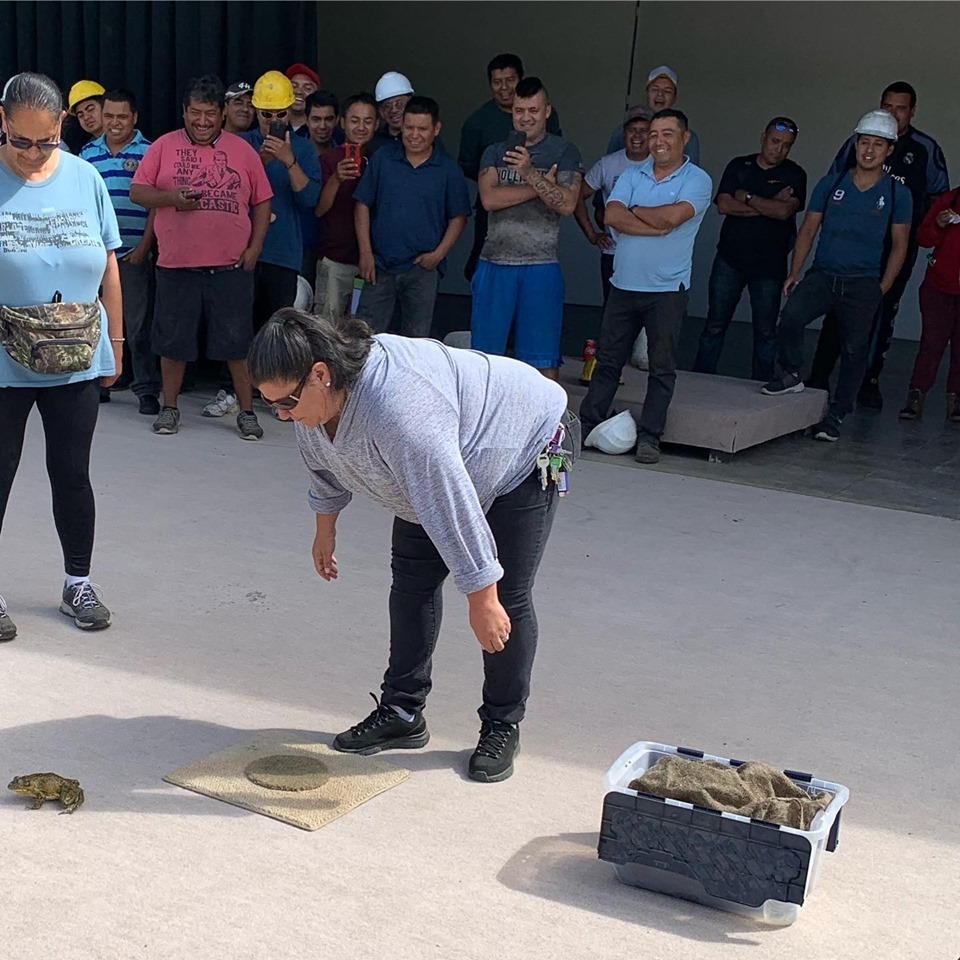 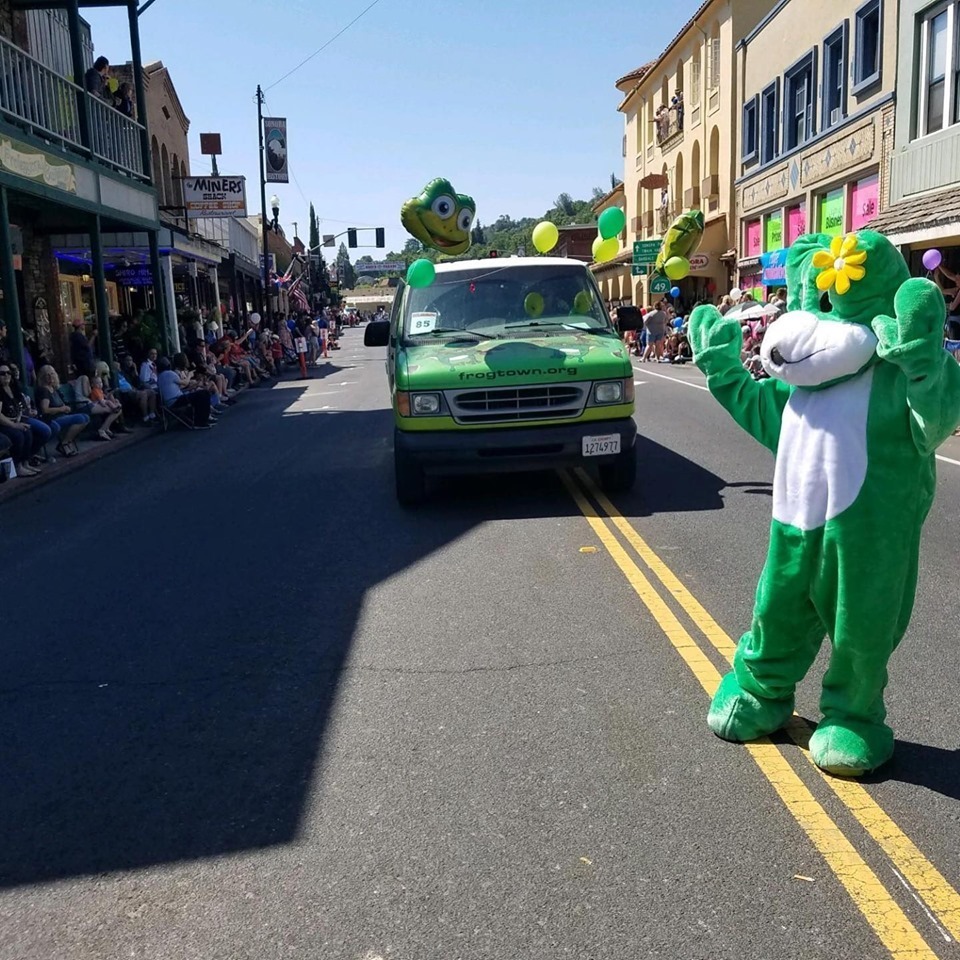 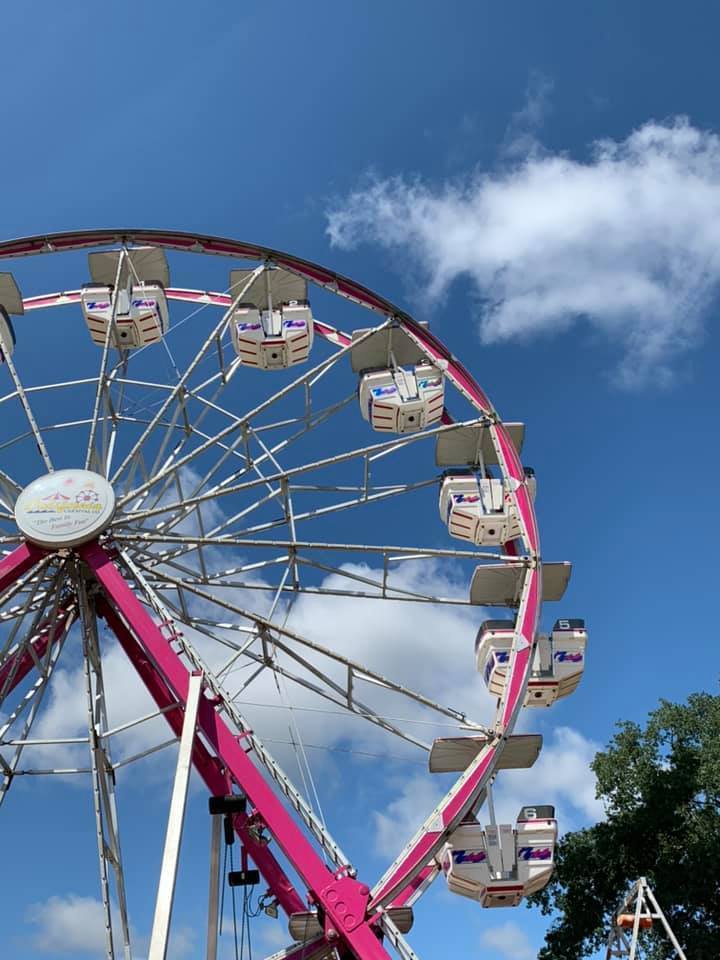 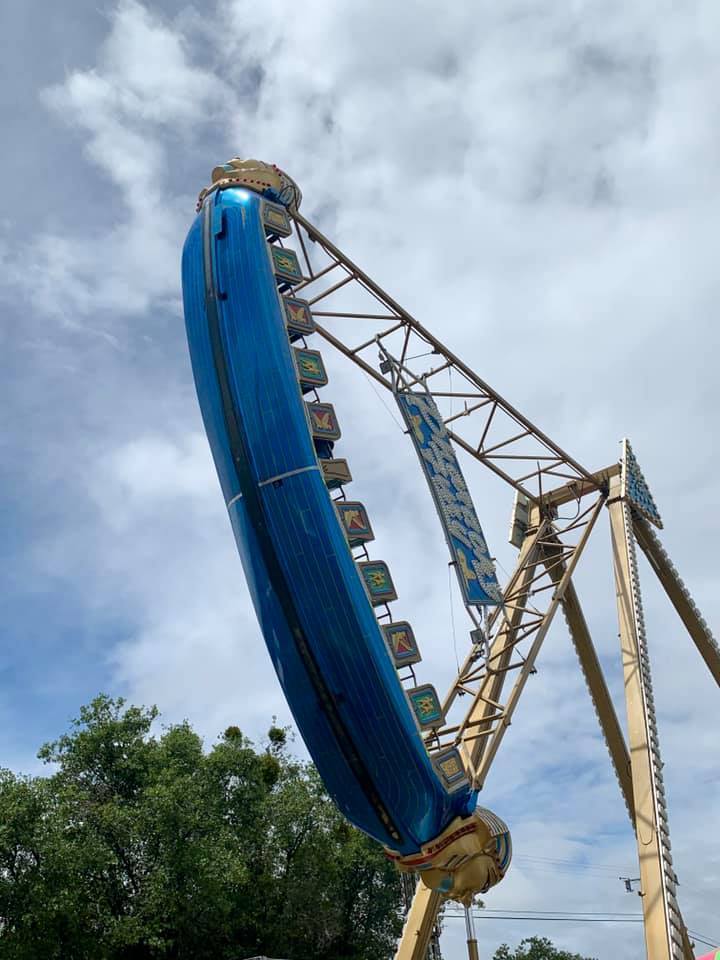 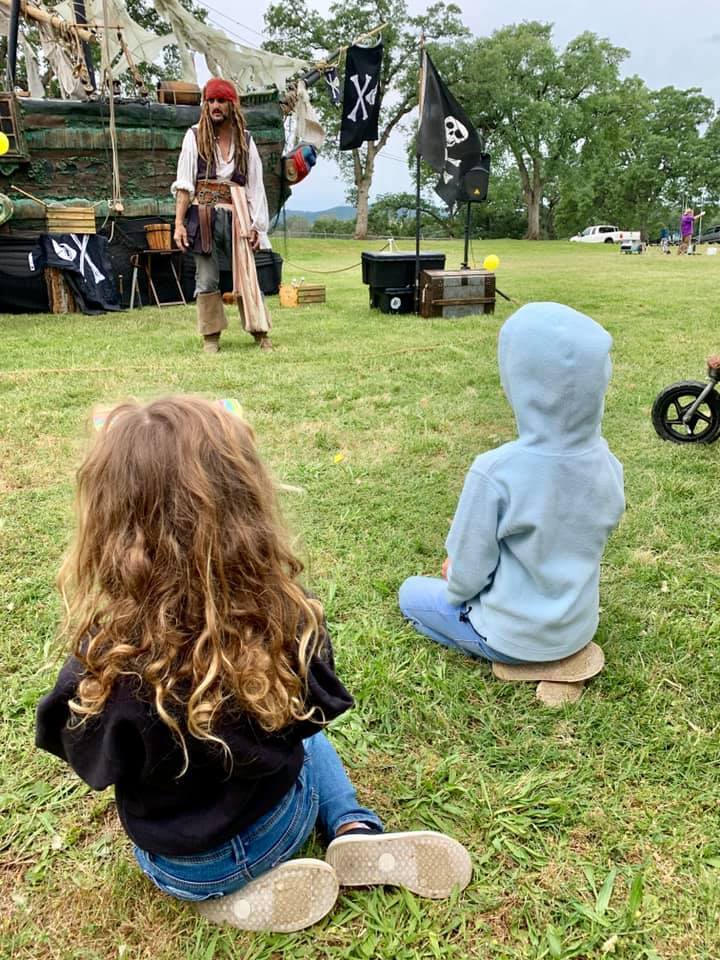