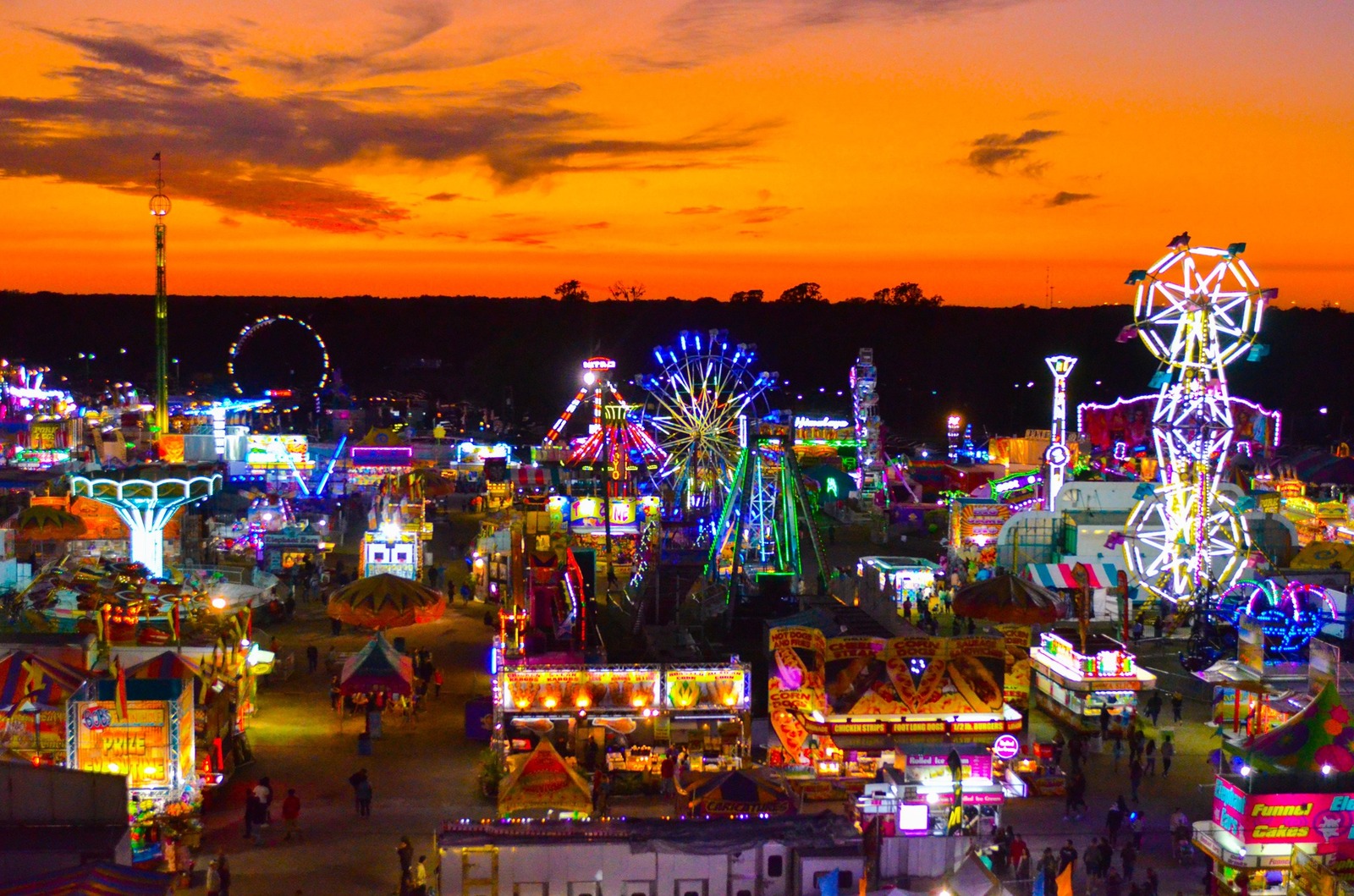 Strawberry Festival Midway Breaks Revenue Records
The Belle City Amusements midway had its highest grossing year yet, despite overall attendance being down due to no national headline acts performing in the grandstand.

Paul Davis, President of the Florida Strawberry Festival, is pleased to announce the success of the 2021 edition of the highly-anticipated event, held  March 4th-14th. Davis and the rest of the Strawberry Festival Board and employees made a decision early on in the planning stages to invest in several products and additional staffing to make employees, volunteers, and patrons feel safe at the annual Berry Fest. Davis certainly felt the pressure of directing one of the first large events in 2021, but knew the extra effort was worth it in order to continue the tradition; “This is important work. Our event celebrates the harvest of the strawberry and we didn't have the choice to move the fair 'down the road,'” says Davis.

As Davis and his team expected, attendance was down from 2020's number but they still had a great turnout. 2021 attendance was 401,777 compared to 2020's 524,254. “The smaller crowd served us well because it wasn't as congested anywhere on the grounds and patrons were able to socially distance easily,” says Davis. Another contributing factor to lower attendance was the cancellation of main stage entertainment in the Strawberry Festival's 11,000 seat arena. “We had 24 acts throughout the event scheduled in the grandstand that we didn't have this year. There was no way to follow protocol with that many people in the arena,” says Davis. Instead, Davis had 2 - 30 x 30 tents and a smaller stage booked with constant entertainment throughout the day which was free with admission. One of the stages provided some ‘local flair' with a talent show that spanned about 3 days of the festival. 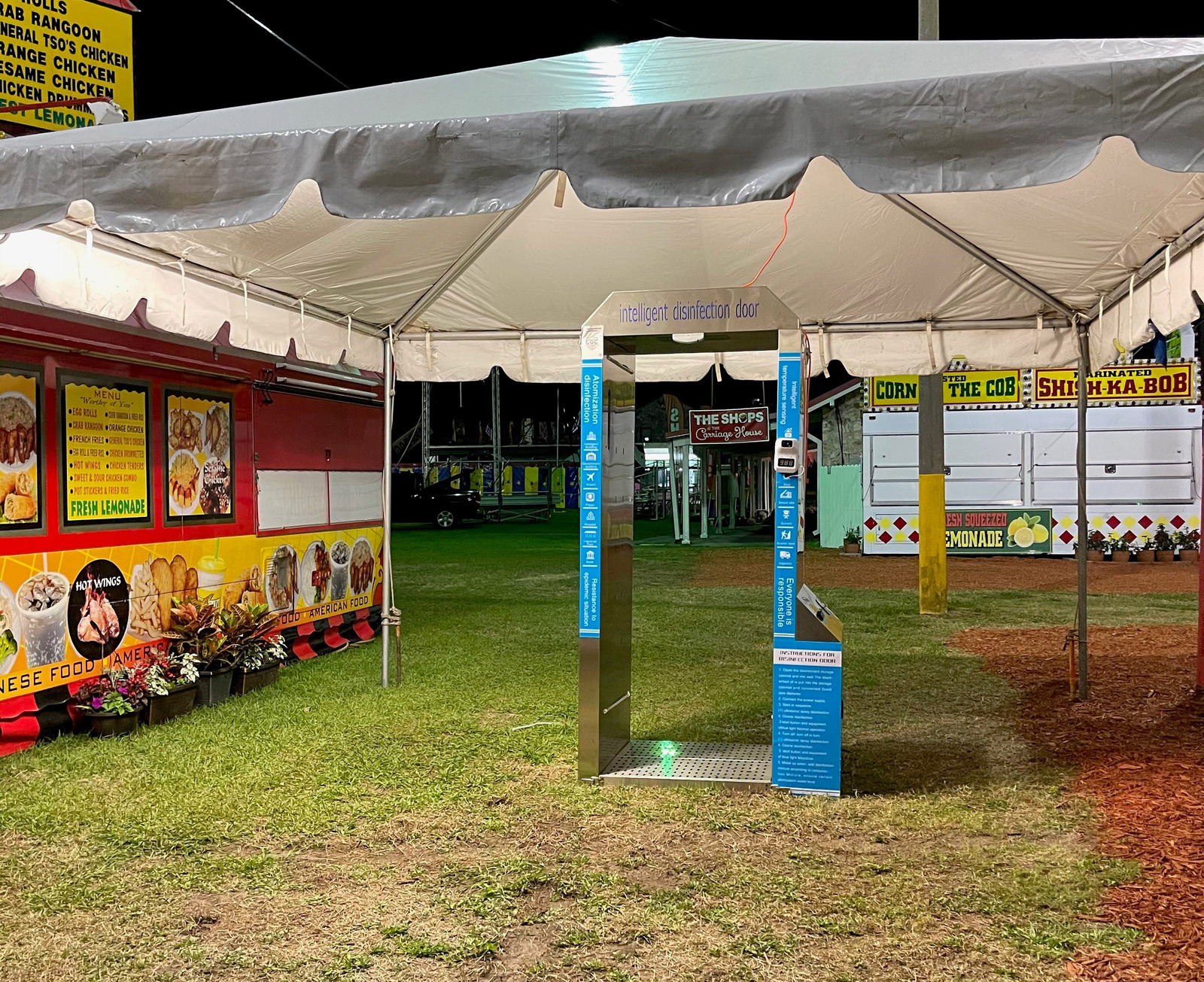 Walk through sanitation stations were utilized at the fairgrounds.

The Florida Strawberry Festival staff made significant adjustments to their facilities in order to make customers feel more comfortable. About 300 touch-less sinks, toilets, and urinals were installed in various facility bathrooms. Davis also acquired some ‘sanitizing tunnels.' Customers could walk through the tunnels which sprayed them with a dry mist accompanied by UV lights to kill germs. There were also about 130 state-of-the art hand sanitizing stations scattered around the fair. “All you have to do is stick your hand in and it will spray all the way around the hand up to the wrist; they can do 30 sprays a minute,” says Davis. Air scrubbers were installed in each of the buildings on the grounds and plexiglass was installed around the fair's reception areas. 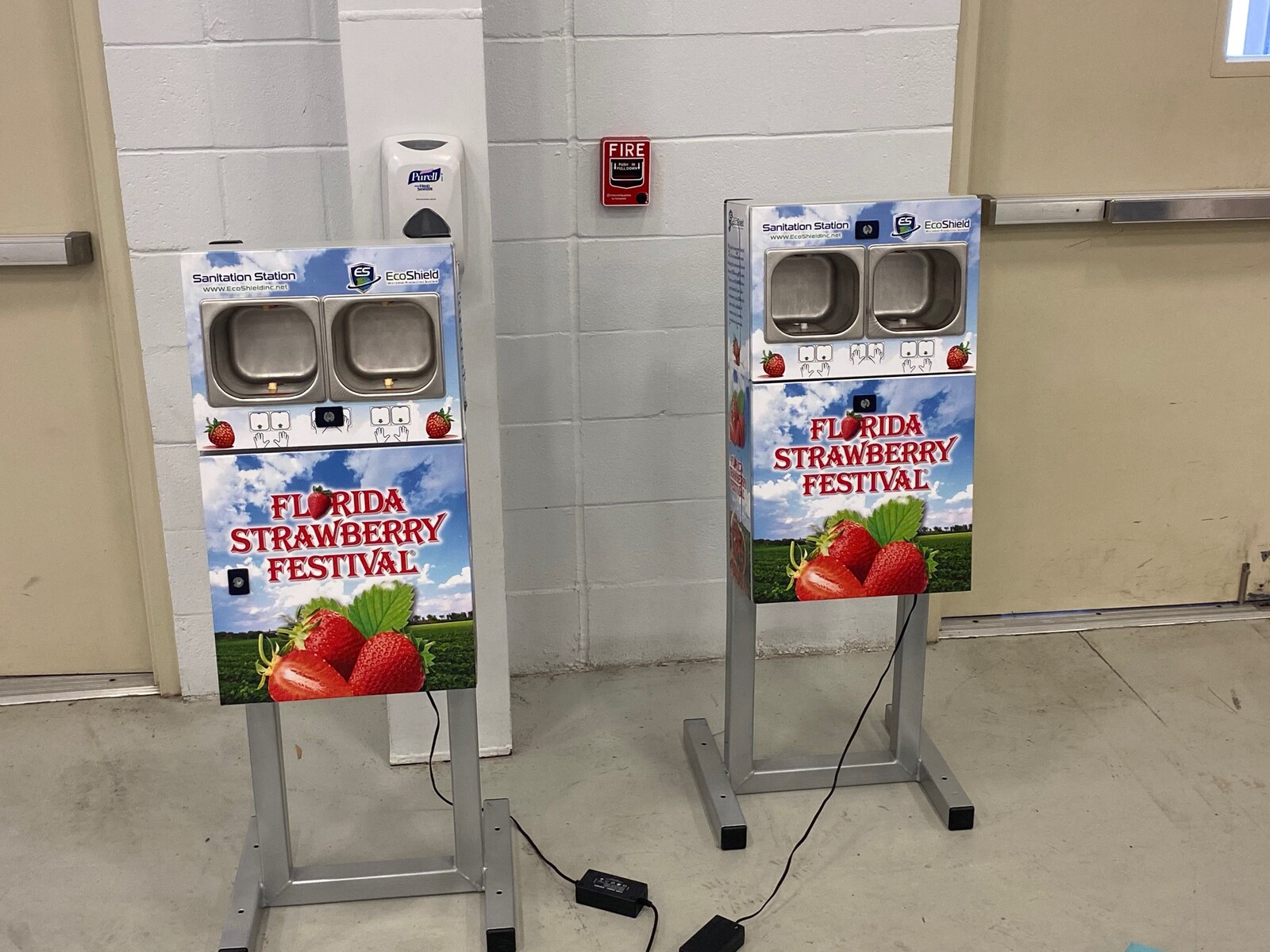 In addition to financial investment, extra manpower was necessary to enforce Covid mitigation strategies throughout the event. Festival representatives were stationed at each door of every facility to hand out masks in the event fairgoers did not have their own available. “Masks were highly recommended outdoors and required inside our buildings,” says Davis. He reports that about 40-50% of people wore masks the whole time. Of course, some patrons had to be reminded kindly to cooperate with the indoor mask requirement. In between every show, Davis had staff members sanitize seats and benches; a process he described as “cumbersome but doable.” One employee was assigned the task of ensuring all of the battery operated hand sanitizing stations throughout the fairgrounds were working and full. All staff members and volunteers were continuously reminded to wear their masks at all times throughout the event. 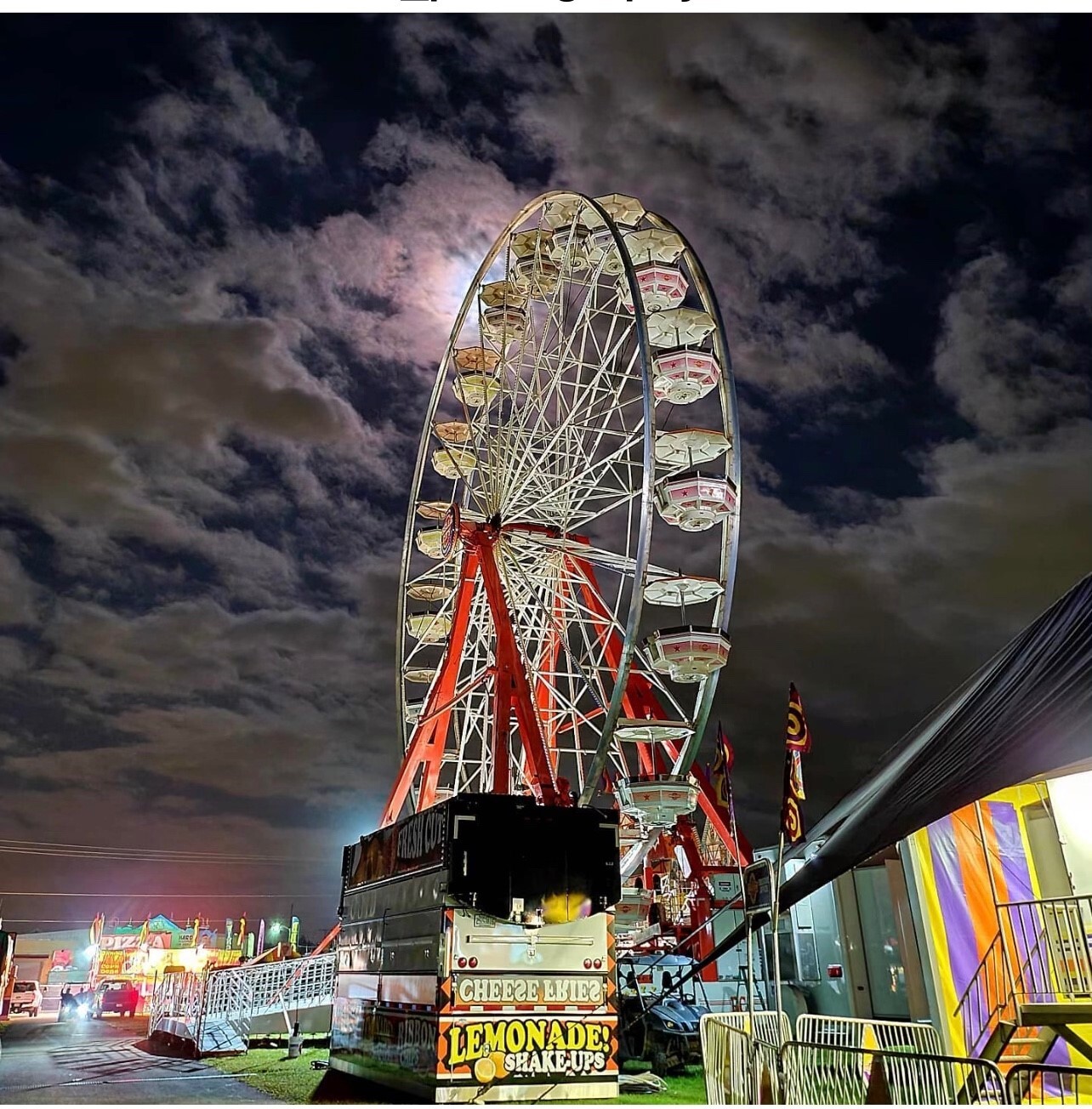 Charles Panacek, owner of Belle City Amusements, reported a banner year for the midway; “we had our highest gross ever this year at the Florida Strawberry Festival,” he says. Luckily for Panacek, he was able to play a couple of events last Fall, so he was not totally new to operating with Covid protocols. “Things like signage, and providing hand sanitizing stations at the exit of each ride, as well as disinfecting rides regularly creates a lot more work and some extra expense. But, we're happy to do it and happy to be working and we want to keep people safe,” says Panacek. The midway was downsized slightly, only by 3 or 4 rides, in order to widen the aisleways and create queue lines which kept people 6ft apart. In the spirit of the festival, Panacek's staff created strawberry shaped arrows for guidance along the lines.

The Belle City team have participated in meetings with the Florida Strawberry Festival since last Summer to help come up with Covid mitigation strategies everyone was comfortable with. “We knew what to expect and how to do it properly. The Strawberry Festival had their own great ideas but also took some guidance from other events we had played, too,” says Panacek.

Fairgoers were certainly appreciative of the effort both Belle City and the Florida Strawberry Festival Board put in to executing their sanitizing plans. “There was a slight inconvenience with sanitizing methods because we'd have to spray the ride, making the wait times a little longer but people were happy to wait,” says Panacek. Reportedly, customers were very engaged and ready to get out and be entertained. “The extra effort and investment is time consuming but when it's all said and done the safety of our customers is our number 1 priority. We want customers to return in the future, whatever time investment we've made is well worth it. People came to ride, eat, and play,” says Panacek. 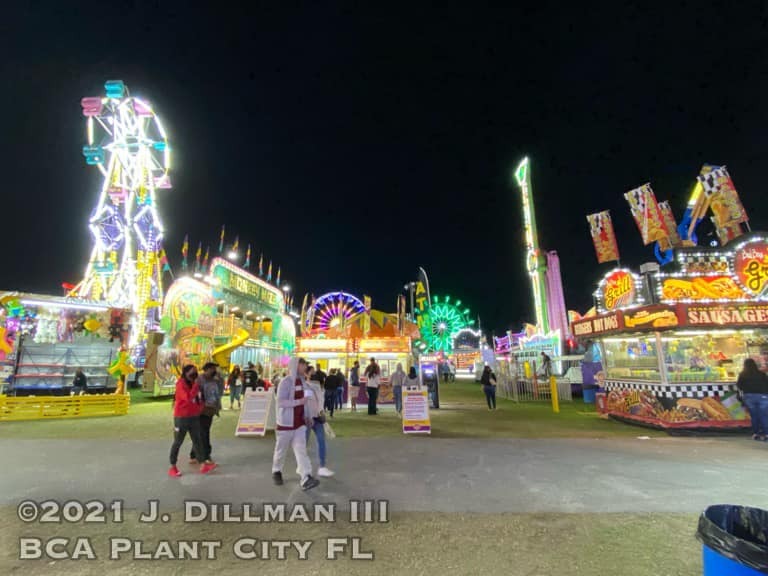 “I'm so proud and appreciative of the board and management at the Strawberry Festival to have the event and have the foresight to know they could do it and we could do it. We set an example to other people in the industry that you can have a productive outdoor event if you take the necessary measures,” he says. At the time of interview, Belle City is currently set up at the Sarasota County Fair and looking forward to a big event there. Panacek is optimistic about being able to stay open and finish the season.

Advertising the Florida Strawberry Festival requires a big media mix of cable, radio, billboards and more, according to Davis. This year, the marketing team shifted some of the budget to incorporate more social media marketing. “We included our Covid protocols into marketing videos and materials,” says Davis. Videos of staff members misting buildings and seating with microbial material that kills viruses and bacteria were a part of daily messaging. Instead of focusing on big, main stage entertainment, advertising material shifted to feature the local talent stage and the midway offerings.

About 7 or 8 months prior to the 2021 event, Davis and his Board sat down and made a decision about what they were going to do to ensure the Strawberry Festival tradition would continue. “We decided at that time we were going to have a fair but cancel our main stage entertainment. It was sad because it had already been booked. We felt comfortable we could have all aspects of the fair safely except for the main stage entertainment which typically draws about 150,000 people,” says Davis. The Strawberry Festival formed a relationship with the Hillsborough County Health Department during the planning stages in order to have transparency with the county and receive some guidance. Then, Davis and his team decided how much money they could spend on improvements, social distancing, and cleaning supplies and hit the ground running.

“We had a very successful run and all that work was certainly worth it,” says Davis. Last year, the Strawberry Festival boasted over $1.3M raised in the agricultural areas of the fair which funds scholarships to college for 4H and FFA kids. “We beat those totals this year; that alone makes our extra effort worth it. A lot of vendors needed to work, a lot of grounds entertainers needed some sort of normalcy and work. They were willing to wear their mask, do the work, and many had banner years and some just had a good year but nobody lost,” says Davis. 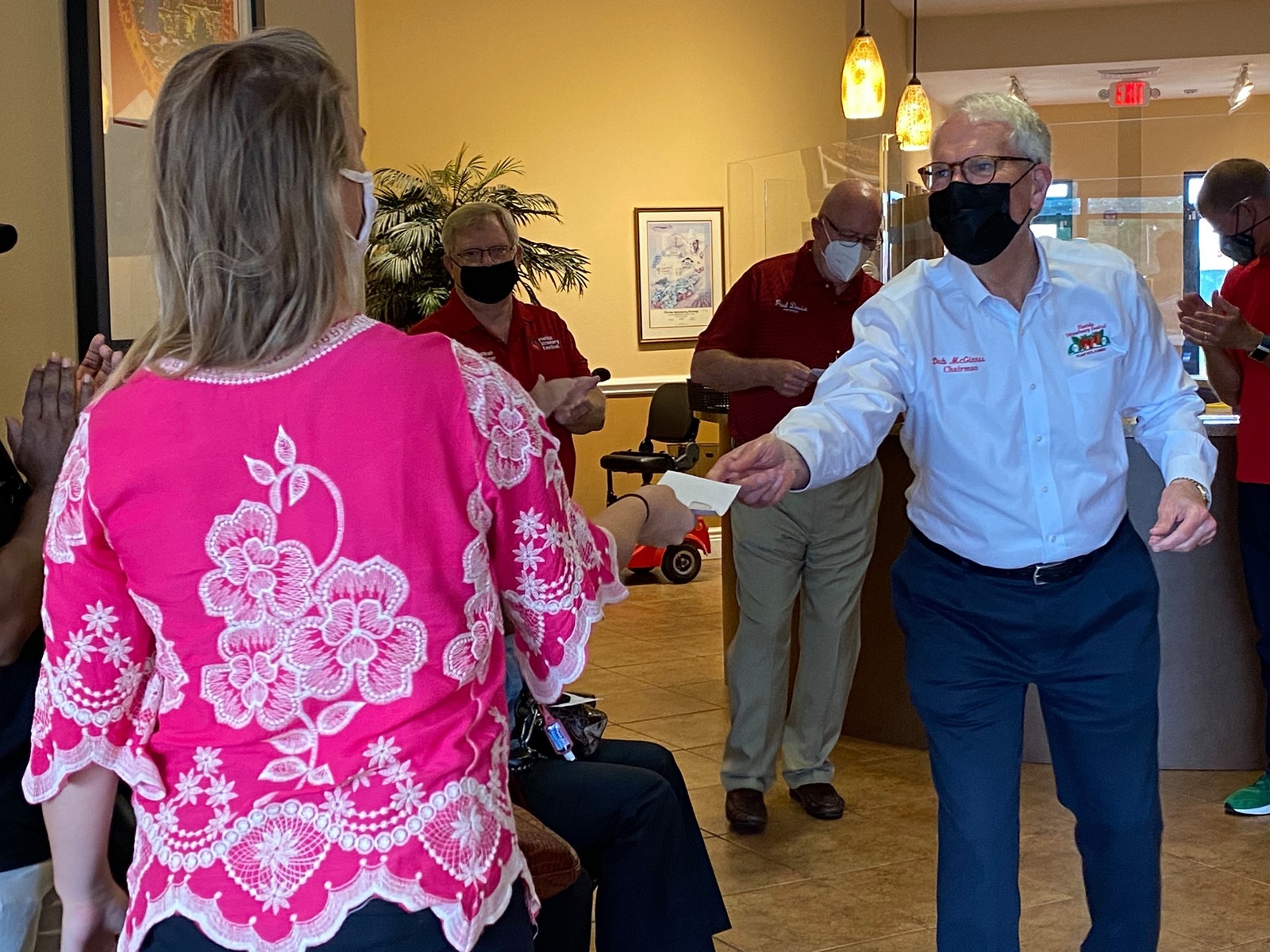 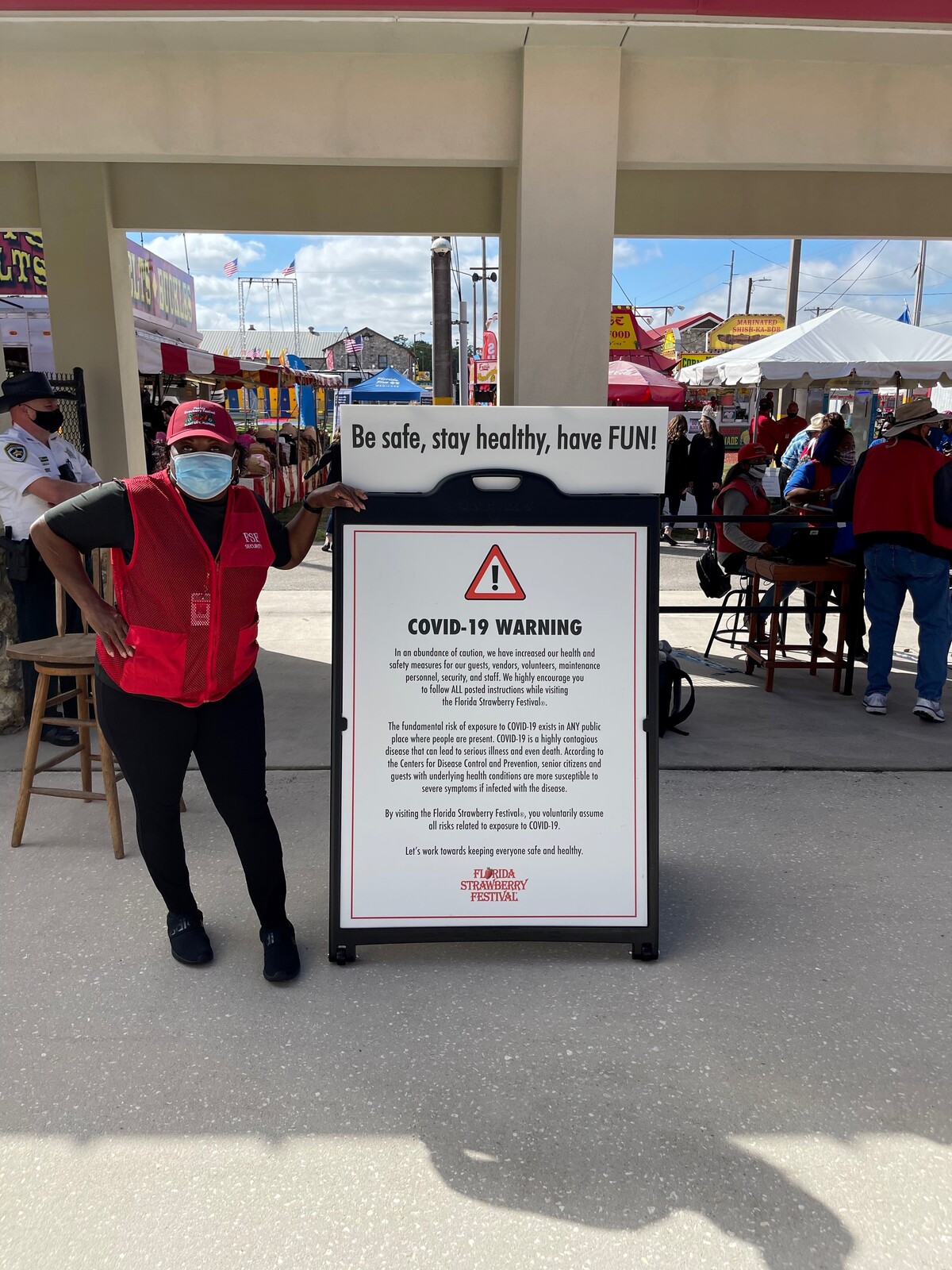 The Belle City Amusements midway had its highest grossing year yet, despite overall attendance being down due to no national headline acts performing in the grandstand.