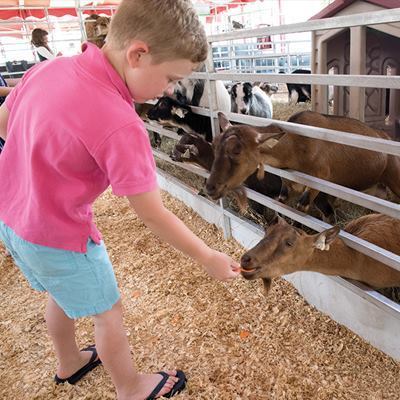 Florida may not host the biggest fairs in the nation – although at least four of its fairs consistently rank in the 2018 Top 50 Fairs as ranked by Carnival Warehouse – but by bookending the calendar year, as well as hosting leading industry meetings – Florida is generally viewed by the fair professionals nationwide as a crucial industry bellwether.

Unlike most other state fair associations whose annual meetings are held in January, the Florida Federation of Fairs holds its annual convention in the late spring, after most of the major 2019 Florida Fairs are completed, and the fair season for the rest of the U.S. is just starting to get into full swing. If the sunshine state is indeed an industry microcosm, the annual convention is the place where many industry prognosticators look for readable tea leaves.
What was uppermost on the minds of some of the most watched fairs in the U.S.? The targeting of fairs by Animal Rights Activists, including PETA, the Humane Society and others. Many states are considering legislation that would severely restrict animal acts, exhibitions and even petting zoos. In New Jersey, the so-called Nosey Law went into effect this year banning all traveling wild and exotic animal acts. Several other state legislatures and municipalities are considering similar bans, according to Mary Lou Kelly, a consultant on animal rights legislation for the Outdoor Amusement Business Association (OABA) and the International Association of Fairs & Exhibitions (IAFE).

The best attended workshop held at the annual convention of the Federation of Florida Fairs annual convention was entitled: Animal Welfare or Animal Rights - The True Story - Protecting the Culture of Our Fairs. The workshop was so popular it had to be split into two back-to-back sessions, and was by far the most well attended event at the convention, according to Bill Olson, President of the Federation of Florida Fairs – his one-year term began with the convention. Olson also serves as President/CEO of Greater Jacksonville Agricultural Fair.

“Responding to animal rights activists was one of the key topics,” said Olson. “It was standing room only. Fairs are worried. It's an ongoing challenge for fairs with animal, activists and different states imposing sanctions on animal acts. It was a big discussion that we had to split into two parts. The speakers ran the gamut from fair managers to legal consultants to representatives from animal acts.”

Olson said he was unaware of any pending animal exhibition restrictions being considered at the state or local level in the sunshine state. “It's not an issue in Florida yet, but we've seen what has happened in other states.  It's more that we are being proactive, instead of reactive.”

Another popular seminar – Beyond Banners - Sponsor Demands In Today's Fast Paced Environment –  encouraged attendees to take a fresh look at the recruitment and retention of sponsors. “There are new trends among sponsorships fairs need to look at,” said Olson. “Sponsors don't just want a banner, they are looking at different ways to expand their visibility at the fair and on the fair's social media.”

“People come to the convention to get good knowledge and information,” said Olson. “I planned the content of the convention as president, and my objective was to present as wide a variety of different key areas affecting fairs now. We presented everything, so any fair would get something out the meeting.”

The attendees were in an upbeat mood with the just completed Fall/Winter Florida Fair season behind them. “As a whole, it was a great year for our fairs. Some fairs had some weather problems, but you can't control the weather. The economy is much better. There's more disposable income, so fairs are more upbeat than last year. They're pretty optimistic.”

What seemed top of mind for  Florida Fair professionals was finding the right balance between effective programming and keeping prices attractive to Florida families. “Fairs are trying to stay relevant to a family,” said Olson. “Fairs are family friendly and you need to stay relevant to families with new attractions. But you also have to keep it affordable, and that is a challenging balance to strike, especially with the increase in competition for the family's entertainment dollar.”

Affordable entertainment – grounds acts, stage acts and animal acts – dominated the trade show portion of this convention. The host hotel's exhibition capacities were limited, causing a drop off in exhibitors. This year, there were 104 booths in the trade show representing 89 associate members, with and an additional 20 Associate Members Companies represented. In 2018 there were 116 booths, representing 96 associate members with an additional 21 Associate Member Companies.

“National entertainment keeps going up and that price point is less affordable,” said Olson. “Everyone is finding creative ways to stretch that entertainment dollar. Smaller fairs are no longer able to afford national acts, so they are looking at more regional acts and tapping into their communities.”

The trade show proved to be a showcase for a range of entertainment options in the more-for-less category of acts. “We had a lot of new entertainment exhibitors, even though our pace was smaller and we had fewer booths. A Frisbee dog shows hasn't been there before and there was an old time blacksmith that was very interesting. What you're looking for is a quality act, something people don't see every day, that is new and unique for your fair.”

This renewed interest in affordable entertainment evident at the trade show prompted convention organizers to host a related topic: What To Know About Negotiating A Great Deal With Professional Grounds Acts.

On the more esoteric side the Florida Department of Agriculture and Consumer Services held open discussion on the proposed changes to Chapter 616, which regulates ride and safety inspectors. “This doesn't directly affect fairs,” he said. “They changed some procedures and protocols on how the rides are inspected, it was mostly of interest to carnival companies.”