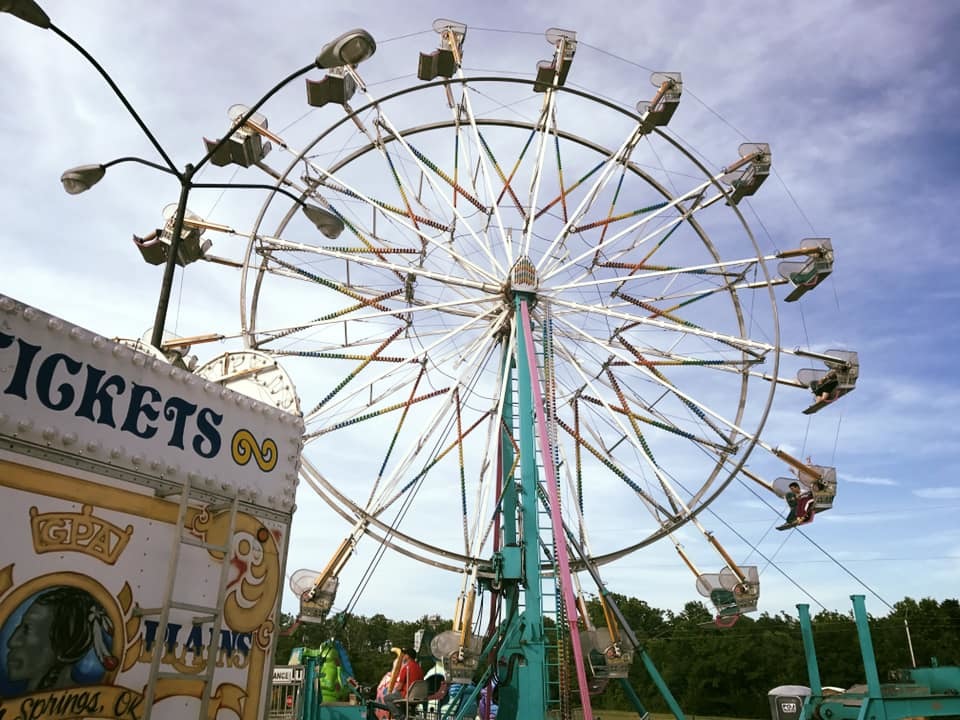 GREAT PLAINS AMUSEMENTS OPENS MEMORIAL DAY WEEKEND IN OKLAHOMA
The show is the first known carnival to re-open after the shutdown in the USA.

A beacon of positivity for the outdoor amusement industry amid the COVID-19 pandemic came in the form of the 9th Annual Commerce Days Festival which ran May 21st-23rd in Commerce, Oklahoma. Joe Lujan, owner of Great Plains Amusements, was thrilled to play the event and is happy to report its success to industry peers. “We're all working through the same things right now and it's important to show that we can have successful events this year and to spread some positivity,” says Lujan.

Leading up to the 2020 Commerce Days Festival, Lujan was uncertain about whether or not the event would take place. Leaving his home base in Rush Springs, Oklahoma and pulling his equipment about 260 miles to Commerce was not an easy nor an affordable trip. “I was a little nervous to set up just in case the event didn't go through at the last minute and I would've been told to tear down,” says Lujan. After arriving in Commerce, the Great Plains Amusements team members were happy to see people living life as normal; “everywhere I went in that town I saw people out and about, smiles all around,” says Lujan.

With the support of the community, Commerce Days went off without a hitch; Lujan reported that attendance doubled from the year before. In order to comply with CDC social-distancing and safety regulations, the festival committee, along with Lujan, made minor adjustments to make guests comfortable throughout the weekend. In lieu of bleacher and communal seating, customers were asked to bring their own chairs and socially distance from other groups when sitting to enjoy food or live music. Great Plains Amusements provided hand sanitizer stations around the rides and food locations and made sure to wipe down the rides at opening and closing. “We did our part to ensure a safe environment but specific rules were not pushed. Nobody had issues following social distancing and we had no problems,” says Lujan.

Over the three day festival, the crowd tended to skew young; most people in attendance were kids and teenagers with their parents and very few seniors in attendance, according to Lujan. Due to the strong crowd, sometimes lines would be rather long to purchase tickets or get on a ride. Normally, long lines lead to complaints, but Lujan and his staff were pleasantly surprised to receive little grief from customers. “We had no complaints from parents, it was almost as if people were happy to wait in line just to be able to do something fun as a family,” says Lujan. He also reported seeing less adults and teenagers on smartphones and more focused on having fun in the present moment.

Although Commerce Days was a huge success, Lujan still has reservations about the rest of his 2020 season. Great Plains Amusements will be heading to Lindsay, Oklahoma next and, as of now, all of Lujan's fairs from late June onward are still scheduled to take place. However, after experiencing so many event cancellations early in the season, Lujan knows that anything can happen. “I normally start my season in March and close up in Mid-October  and all of my early events were cancelled. Right now, I have 23 people I'm keeping on payroll every week. We've kept them busy working on rides and trucks when we have weeks off but if we can't salvage the rest of the season it's going to be tough to keep that up,” says Lujan. In his experience, many committee members of the events along his route are ready to move forward with their festivals or fairs but sometimes one or two people voicing concern can shut down planning efforts. “I'm hearing that some committees can't get people to agree and move forward with the event so it's still a little risky for us,” says Lujan. His efforts are spent on maintaining a safe environment for those who want to attend the events and those who don't feel safe coming out should not feel any pressure to do so.

Despite having some concerns, Lujan is focusing on the positive; “after setting up and having this successful event, I know anybody can do it. I want to encourage other people in the industry. This is normally such a competitive business but I've had calls from show owners all over the country wishing me luck and wanting to hear how everything goes.” After operating for 44 years, Lujan no longer refers to owning and operating Great Plains Amusements as a job. “This is a fun business to run. I love the people I work with and I love seeing the customers' smile and providing family fun,” says Lujan.

The show is the first known carnival to re-open after the shutdown in the USA.