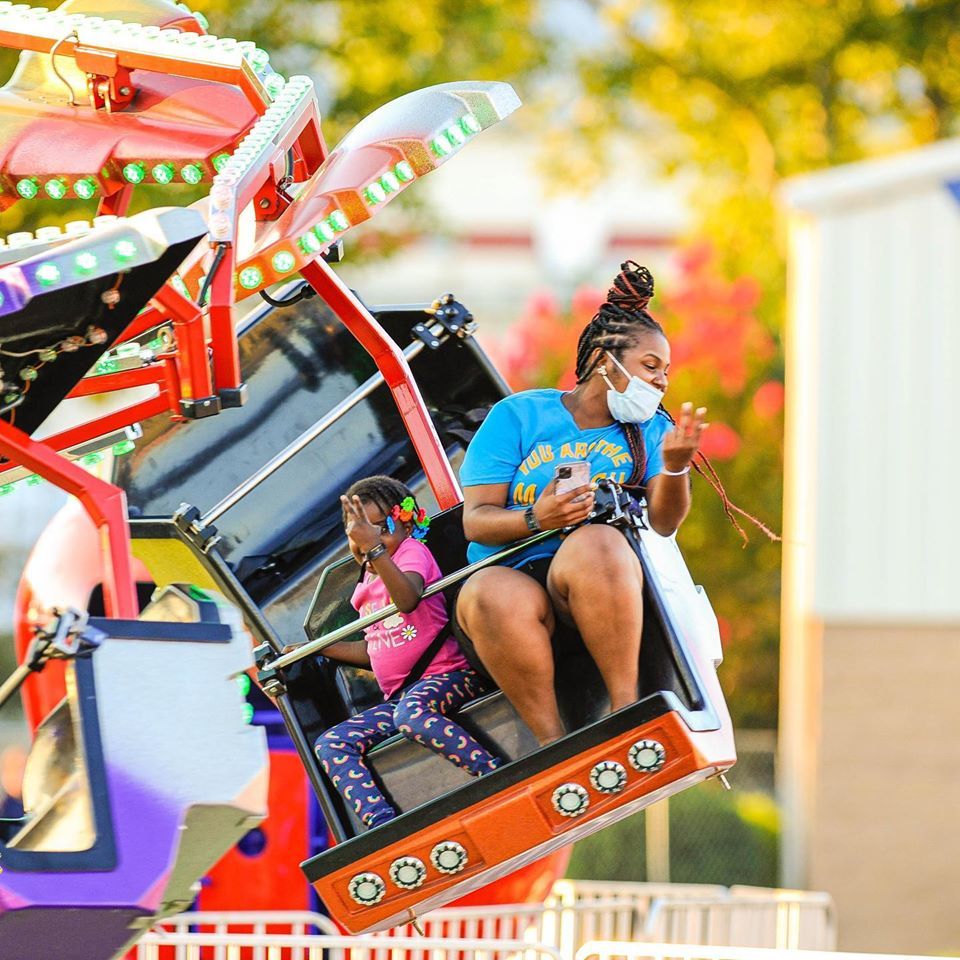 GUEST RESPONSIBILITY ENCOURAGED
Guests were encouraged to be responsible when attending the fair by adhering to social distancing guidance, wearing face coverings when social distancing was not achievable, and washing / sanitizing hands frequently.

The Delaware State Fair celebrated its centennial last year with great fanfare and record attendance. Turning 101 however earned this mid-Atlantic summer tradition a more complicated recognition – it was the first state fair held in 2020 after the Covid - 19 Pandemic hit.

Upwards of 90 percent of states have postponed their state fairs due to the COVID-19 pandemic, but when that cancellation cascade unfolded, Delaware took a more pragmatic approach by announcing a downsizing of the fair, most notably cancelling ticketed concerts at the M&T Bank Grandstand, whose lineup featured Hank Williams Jr., Dierks Bentley and comedian Jim Gaffigan.

Even though the governor didn't give the official greenlight for until early July, the fair worked diligently towards making the fair a safe environment, which involved a close relationship with the local health department to approve every aspect of their plan.
Working Closely

“In March, we got together with officials at the Department of Public Health and identified the process of what needed to be done,” said Danny Aguilar, Assistant General Manager, Delaware State Fair. “The International Association of Fairs & Expositions (IAFE) had tremendous resources. We also did Zoom meetings and webinars with other fairs. I think we worked more hours when we were working at home than working in the office. Early on, we saw a comprehensive plan of how we would reopen the state, region by region, with non-essential business like restaurants and bars, and how they reopened. We accepted and adopted a lot of the ideas, but we also know the fair was unique.”

Aguilar closely watched how amusement and theme parks reopened, and worked closely with the fair' carnival provider, Wade Shows, to fine-tune the midway, which of out all fair segments is the space where touch points are the most abundant. A 67-page plan was eventually produced, and submitted to the DPH, and after some tweaking it was approved. “We had a strong plan, and we hit the ground running, The DPH made some adjustments, but we were always in communication.”

Developing and implementing a plan is one thing, but the 2020 Delaware State Fair recognized another issue that if ignored could make any plan superfluous: If you build it, will they come? 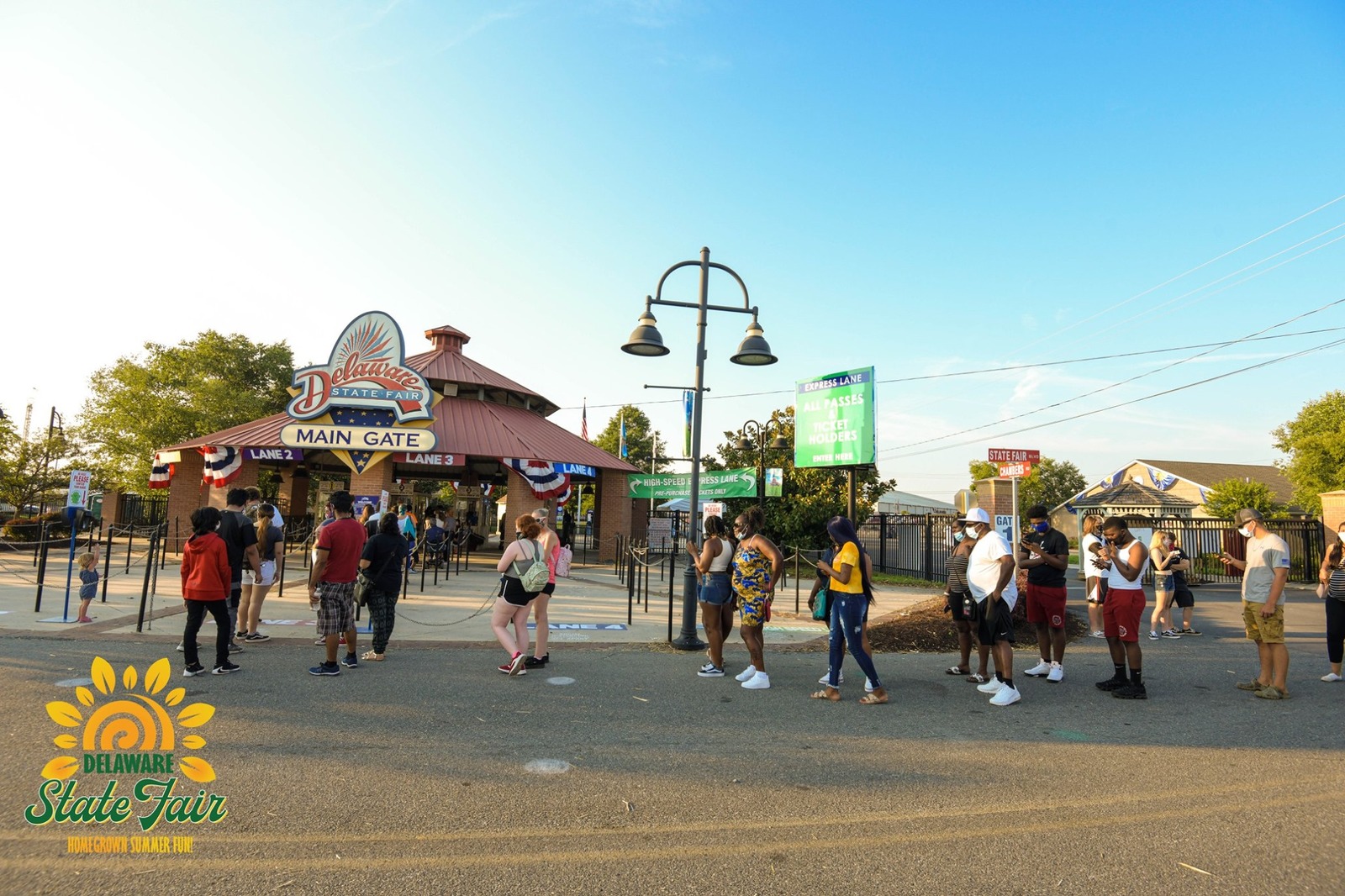 Fairgoers social distance themselves as they wait to enter the fairgrounds

One way to encourage attendance would be to alleviate the fear of the unknown and in 2020, there's no better way to reach people than social media. Thus, Danny's Daily Dish, an ongoing Facebook series was created, hosted by Aguilar. Leading up to and throughout the fair, a masked Aguilar introduced fairgoers to new rules during the Pandemicl while also showcasing the fun and entertainment the annual celebration everyone knows and loves. It reminded everyone of the familiar while introducing them to the new safety precautions.

As the name suggests, the original concept was to promote food, but it rapidly expanded and soon drove the marketing campaign of the 101st Delaware State Fair.

“We wanted to make the folks feel like they're part of the fair,” he said. “We showed little virtual highlights, brought them behind the scenes. We did the videos and Facebook lives, it was all produced in-house. We wanted the families to be more educated, about social distancing, where the hand sanitizing stations are, and all the things that are part of our lives now. But we also wanted to feel a sense of responsibility so they can have a safe experience.”


Sure to be a staple, 2020 was the inaugural year for Danny's Daily Dish. According to the fair, it increased Facebook “engagement by 520 percent.”

The fair's marketing budget was about the same as last year, Aguilar said. The cancellation of the concerts changed the messaging and the fair dropped most of its radio advertising, switching those funds to increased digital marketing. “We rolled the concert money into additional advertising for food and carnival. It also freed me to get more involved with the social media marketing.”

Aguilar did forego the social media role once, when Frank Zaitshik, president, Wade Shows, guest-hosted Danny's Daily Dish for two episodes – a brief clip on how to use the Wade Shows FunTagg Fair Pass and a longer film that took the fairgoer on a fun but comprehensive tour of the new midway, literally walking the viewer through the new queue system, the social distancing markers, hand sanitizers cleaning protocols and other modifications Wade Shows made to keep guests safe.

In a mask and face shield, the carnival company owner was inviting and whimsical, but also honest and forthright imploring attendees to “Take some of the responsibility together, so we can become a powerful team in reducing the probability of getting the virus.”

The Delaware State Fair was the first large fair for Wade Shows since the lockdown went into effect in March. Unlike smaller carnival companies, the overhead for Wade Shows playing still dates and shopping center parking lot events was financially infeasible. “We're not lean or mean enough to play those dates,” he said. “We wouldn't even break even.”

Being the first state fair after teh Pandemic– and one of the few fairs of any kind – to be held in 2020, the spotlight shone brighter on the 2020 Delaware State Fair midway and Zaitshik proved up to the task, creating a safe environment, complete with hand sanitizing, regular cleaning of all equipment and touch points and  Lexan protected operating stations at all rides.

“It the end it was nothing tricky, it was just following the guidelines and beginning to think of how many sanitizers, where the potential areas of concern were,  and what kind of disinfectant works best,” said Zaitshik. “We decided to build the Lexan frames for our operators so they're protected on three sides. You have to offer your workers the safest work environment possible, and we use masks and face shields. We take temperatures every day and every day they fill out a questionnaire.”

The midway had 44 rides, down from the usual 56 to provide additional space on the midway for social distancing.   Power's Great American Midways provided almost half the rides, the first time that company has played the Delaware State Fair. Power's Great American Midways, whose entire 2020 route was cancelled, works closely with Wade Shows at several large fairs; ironically the Delaware State Fair was never one of them. “It was half the distance for my good friend and associate Corky Powers to come to Delaware than me, so we decided early on that he would put up half the rides,” said Zaitshik. “I am familiar with the quality of his equipment; we both know what we're doing. We put on the first state fair of the year without any hiccups.”

Wade Shows partnered with Powers Great American Midways to execute a mitigation plan that could be the blueprint for other carnivals to use to open at fairs and festivals.  It was a complete team effort," said Zaitshik.

He added, “Financially the fair was less than we hoped for, but we are very proud of the product we put out and what could be a blueprint for other fairs on how to open.”

Wade Shows does have a handful of dates on what is a truncated route, but Zaitshik preferred not to comment further. “This year, nothing is for certain and any one of those fairs can cancel. 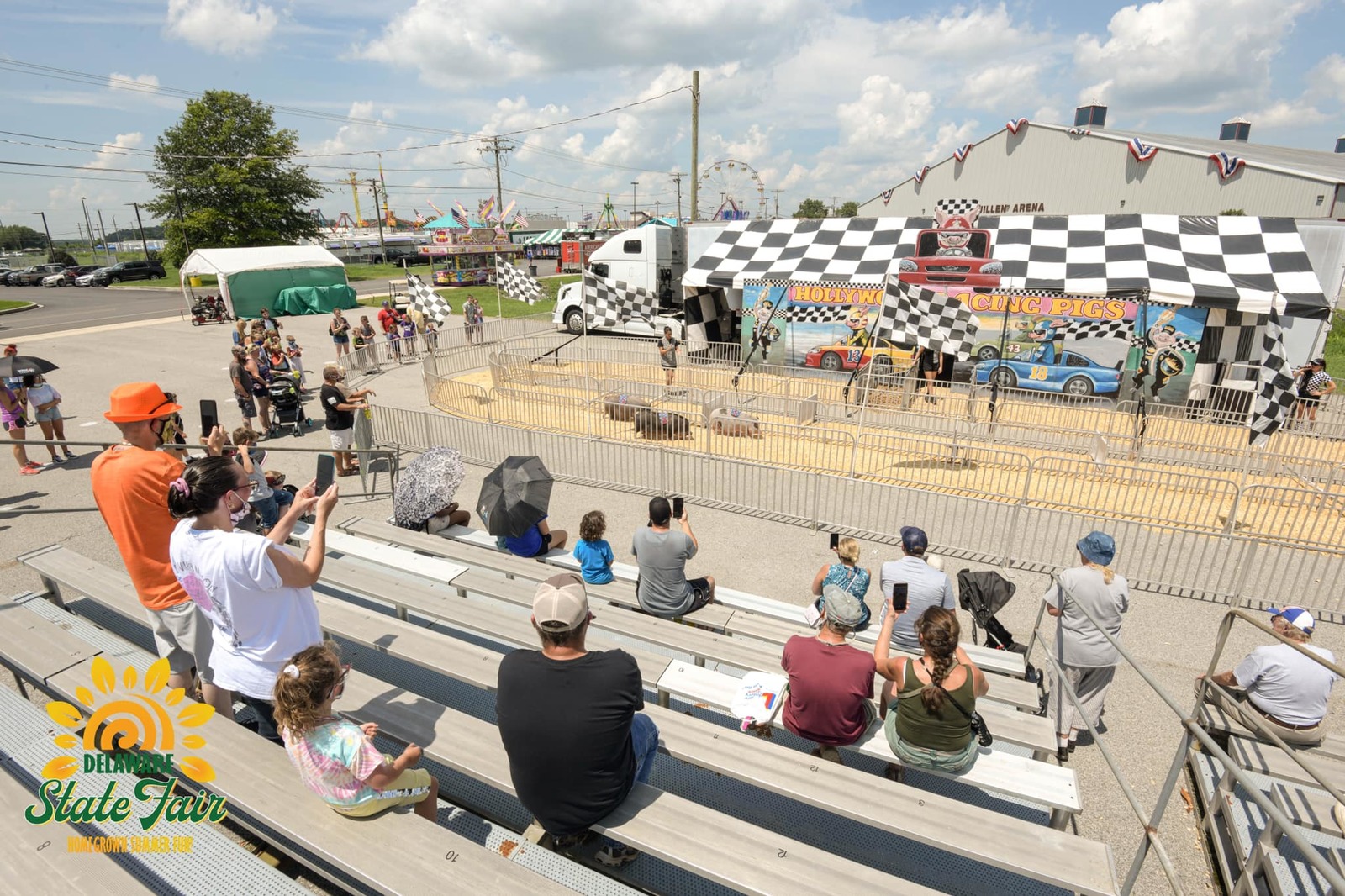 Guest seating was spaced out to allow for social distancing

Other fair attractions included Circus Hollywood, Disconnect K9s, Pig Racing and Roberto the Magnificent. Social distancing was enforced and roaming acts were instructed to move quickly and not create a crowd – basically the opposite of what grounds acts usually do. All seating areas, including bleachers, were monitored closely to remain at 60 percent capacity.

In order to maintain a lower capacity fair, Aguilar flattened the attendance by instituting tiered pricing: from 8:00-11:00, admission was free; 11:00-4:00, half-price, and full price from 4:00 until closing. “We encouraged folks to arrive earlier by saving a few dollars,” he said. “From a crowd management perspective, not having the concerts made things go much easier.”

Although civilian fairgoer attendance may have been expectedly lower,  Aguilar noted that many fair managers attended, especially from Florida and Texas, who hold the first fairs of the year. “They were watching what we are doing,” he said. “I hope it's not as bad but the thinking is that COVID will be with us for a lot longer.”

But when all was said done, the fair industry had cause to breath at least a sigh of relief. The first state fair was held without incident, showing the public that fairs can be as safe as a supermarket, but of course, much more fun. Or, as Marla Calico, President & CEO, IAFE said as a guest on one of the final episodes of Danny's Daily Dish, “It's an honor to be here.” 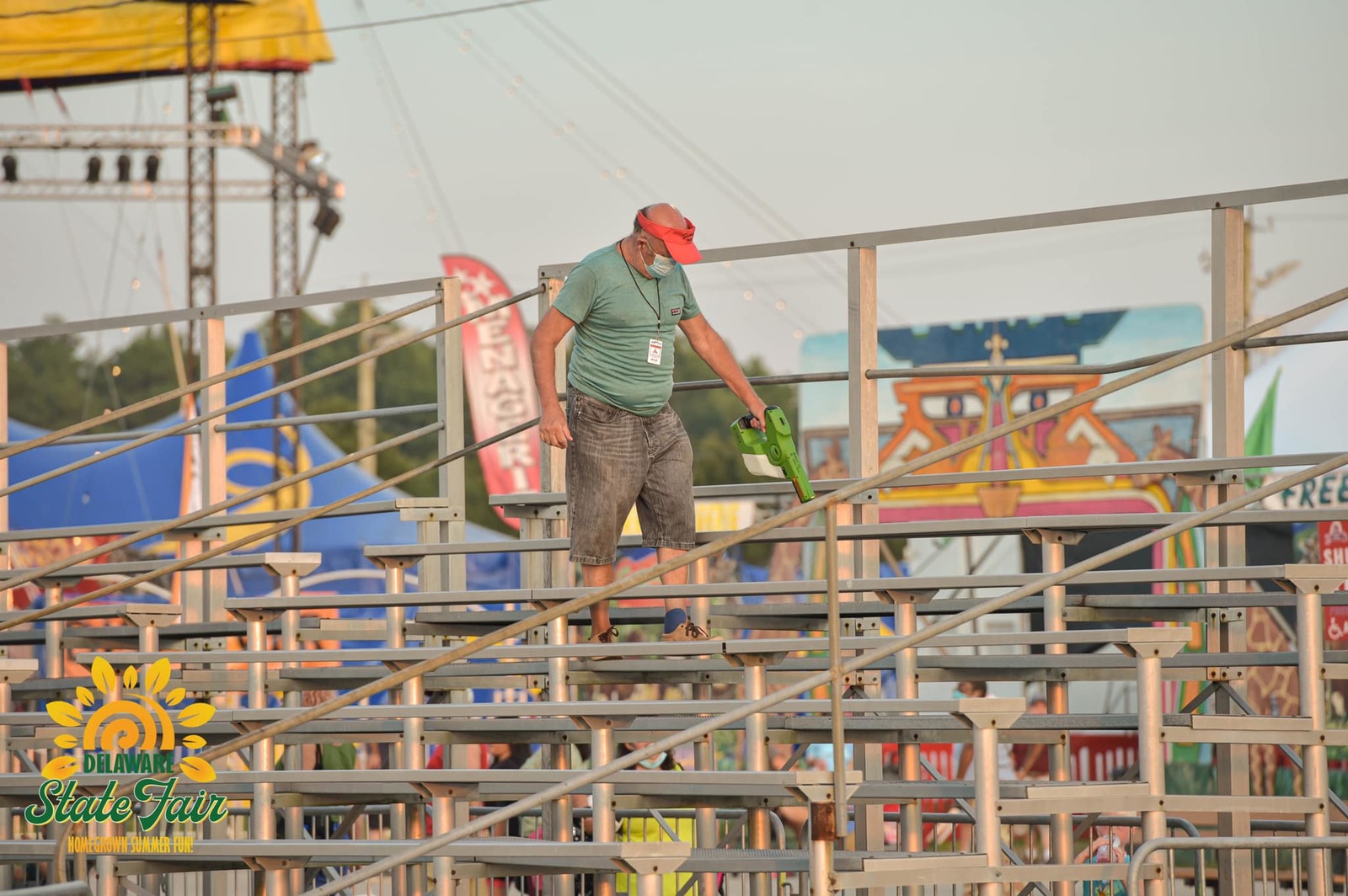 Fair staff sanitizes the bleachers after a show 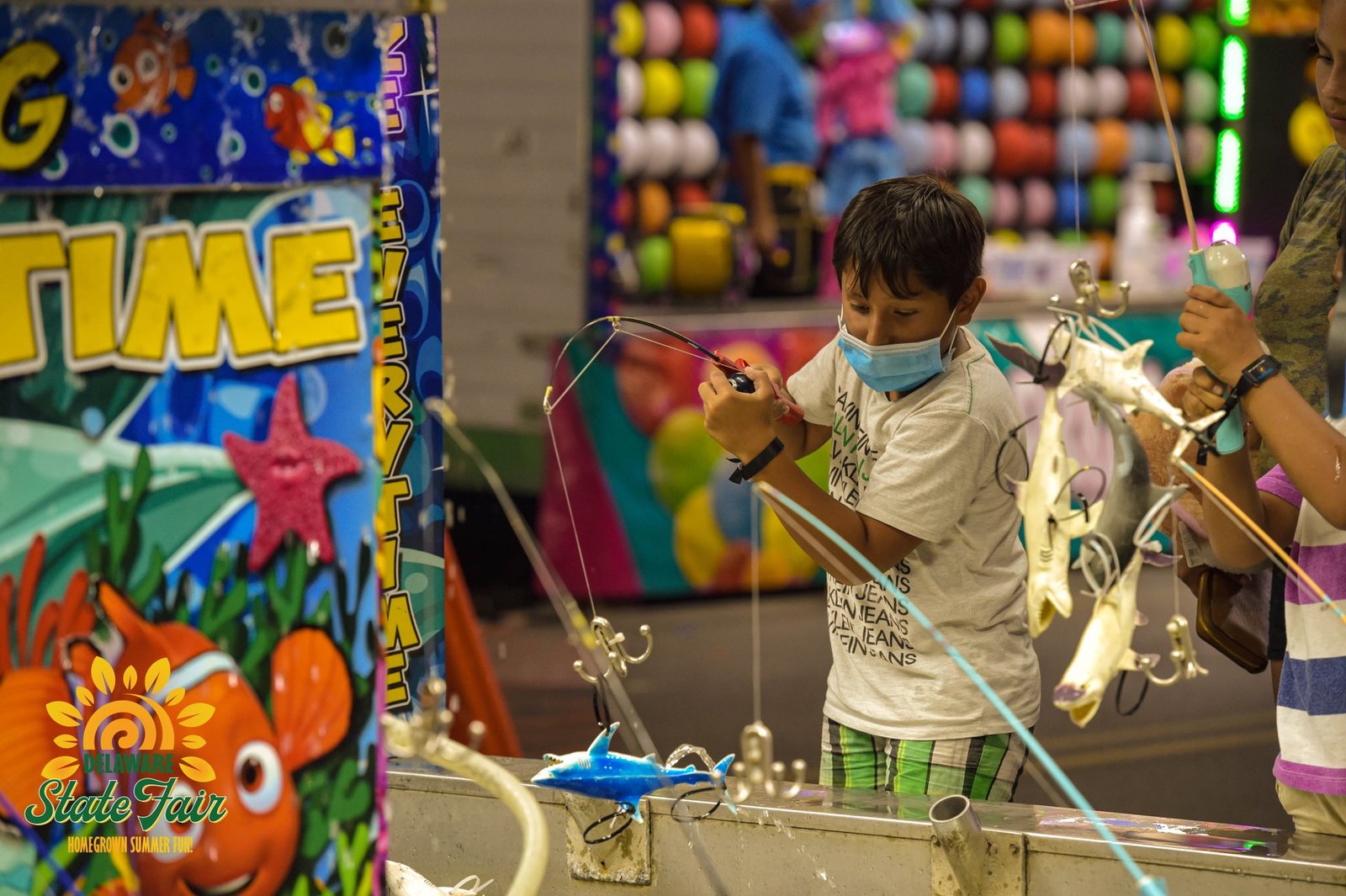 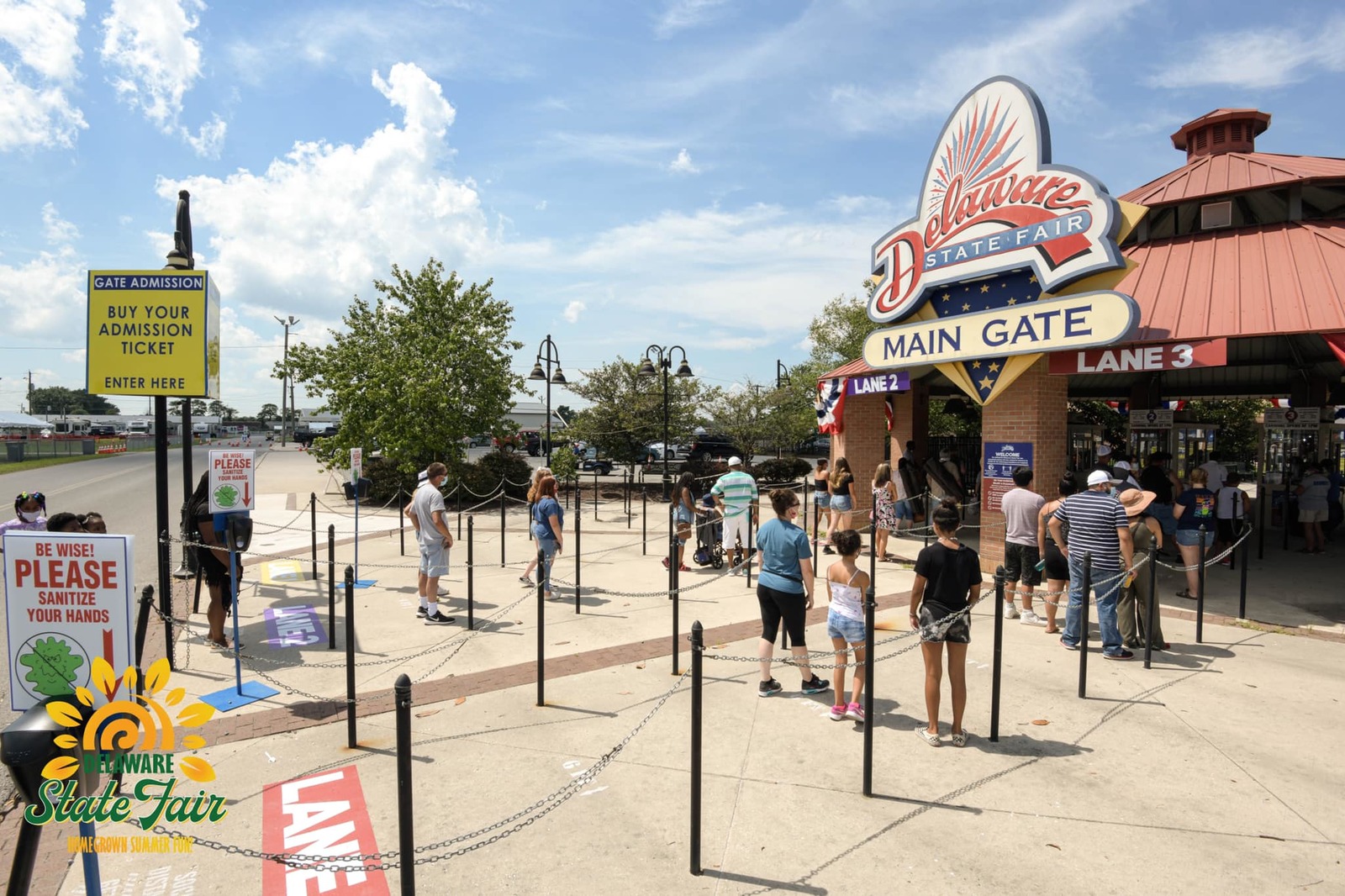 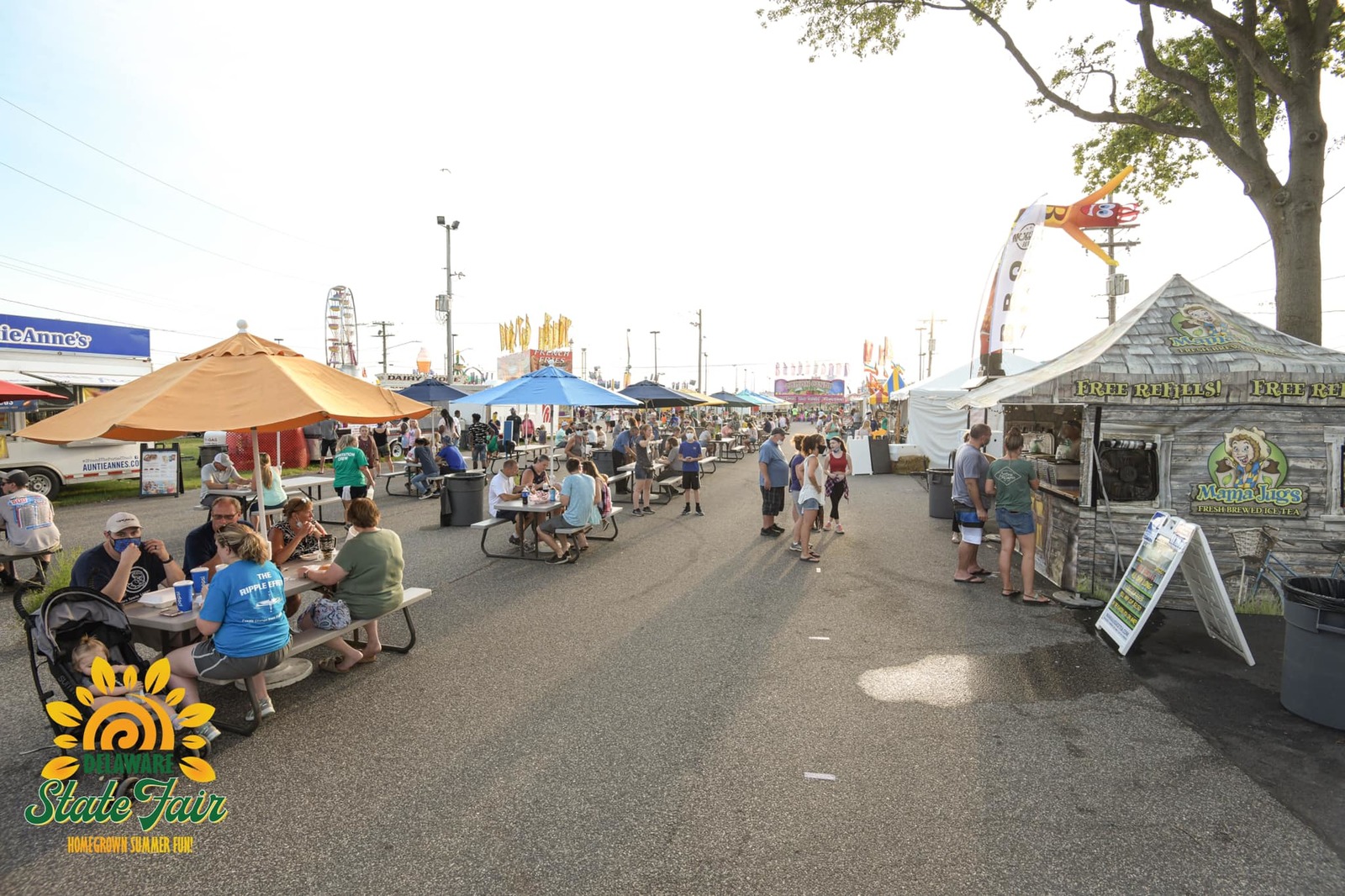 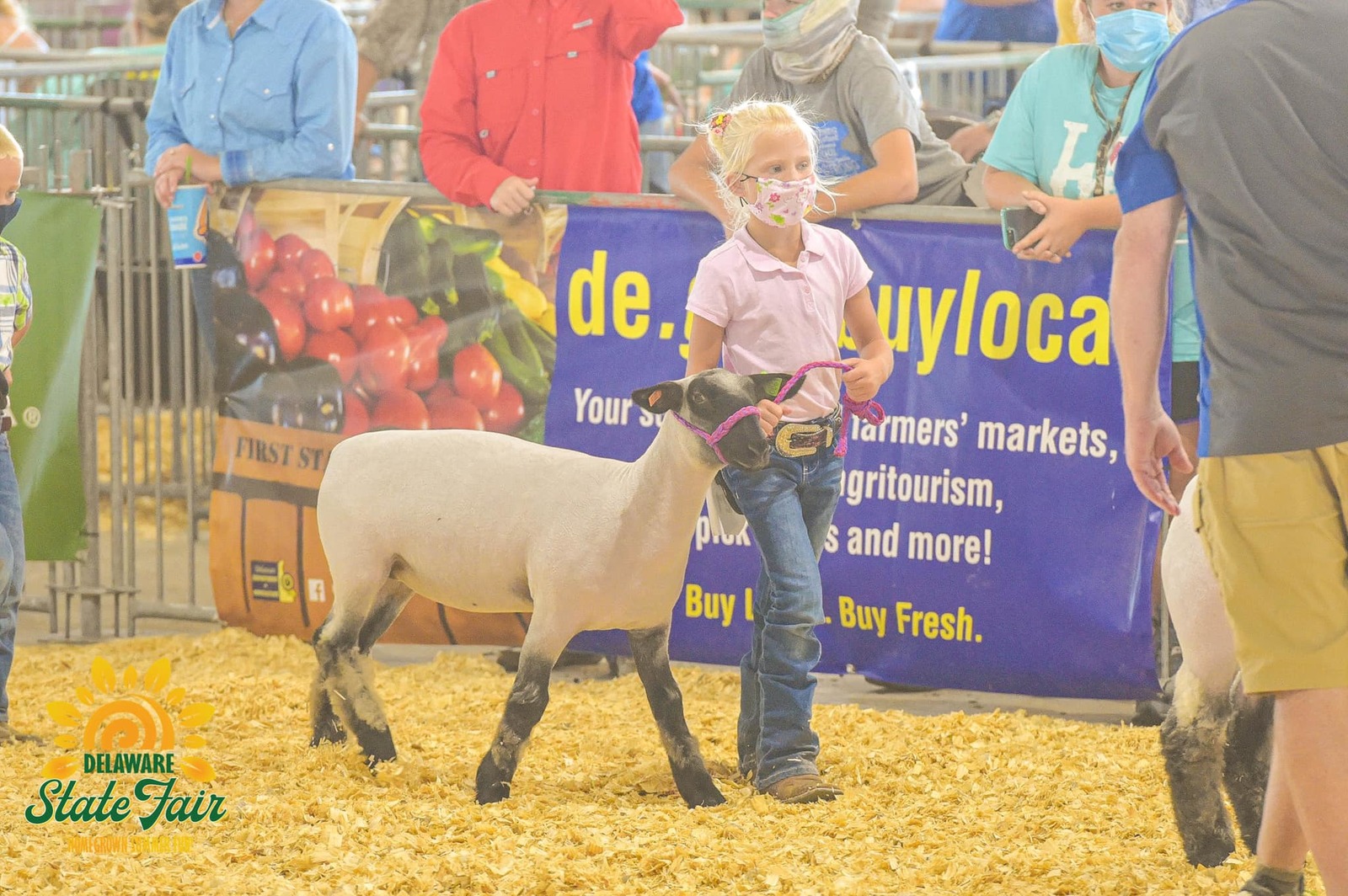 Socially Distanced Line at the Gate

Guests were encouraged to be responsible when attending the fair by adhering to social distancing guidance, wearing face coverings when social distancing was not achievable, and washing / sanitizing hands frequently.