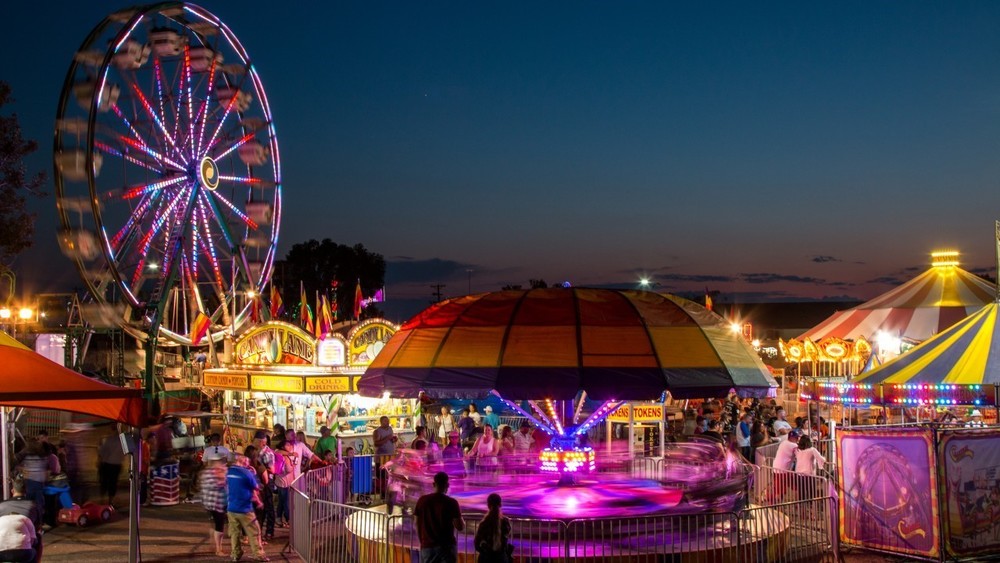 The heat was on this year for the 150th Colorado State Fair, held in Pueblo, Colo., which had seen visitors diminish in the past few years. But this year, visitation was up by 21,904 for a total of 466,380 visitors despite temps in the 90s, according to fair general manager Scott Stoller.

Stoller credits the upswing in attendance for the eleven-day fair, which closed September 2nd, to a stronger concert line up, along with new promotions, including free admission days for children and seniors.

Stoller relates “In addition to excellent reception surrounding traditional fair favorites, new attractions such as our World Slopper Eating Championship, Tattoo As Art talk, Mayors Day and more” added to interest. What is a slopper-eating contest? Puebloans know it as a local treat: a cheeseburger covered in green chili. No utensils were provided for the consumption of this favorite. Most consumed: 28 and a quarter sloppers in 8 minutes. The contest, which featured Colorado beef and Pueblo green chilis, garnered nationwide news coverage, picked up by media affiliates across the country. The event on its own brought in 1,000 attendees. “That was a pleasant surprise. That's not a big number when you are close to a half-million people, but it was a lot of stuff like that which really helped,” Stoller explains. Other popular competitions ranged from cupcakes to beer.

Over the run of the fair, the livestock department tallied a total of 2,747 entries with 146 animals sold and the general entry/fine arts department received 3,555 entries from 936 exhibitors in categories that included fine arts, pantry, quilts, farm and garden, poetry and beer and wine.

There were approximately 200 commercial vendors and 46 food vendors present who also contributed to the fair's coffers, with retail sales up 4% this year.

New attractions that drove the most interest, as the fair's GM reports, were the All-American High Dive Show featuring a flaming diver, hypnotist Richard Barker, comedian Farmer Phil, and the acrobatic SalidaCircus. The Brett Young and 38 Special concerts drew strong crowds, as did the demolition derby, Celebración de  Los Charros, and the aforementioned Slopper eating showdown. For these events, the fairgrounds' Bud Light Grandstand, Southwest Motors Events Center and Pueblo Bank and Trust Pavilion venues were all near capacity.

Discount days were a boon for attendance. The most popular was “Twosday,” during which the fair offered $2 admission, $2 food items, $2 ranch rodeo tickets and $2 carnival rides on Tuesday, August 27.

“The big sub-note is that we overcame the heat,” fair General Manager Scott Stoller asserts.

“Our concert lineup also had a bigger draw this year than it had last year. That diverse lineup really helped,” Stoller said.

The biggest concerts were: were 38 Special, which attracted about 7,000 people; Brett Young, who brought in 6,600 people; and Aaron Watson and the rodeo, which saw a whopping 13,000 people.

The Great American High Dive Show, which features pro divers covered in flames diving from an 80-foot platform, was also a big draw, along with a Wild West Show, and the constantly-added-on sculpture work of Farm Jill Balloon Sculpting. Horse events, an annual attraction, also drew a solid crowd this year.

Another crowd-draw was the Colorado State Fair's 5K Stampede Run. The event began 4 years ago and has seen a 20% increase in attendance each year with over 150 runners competing this year.

“We really like to have something for everyone…having a 5K run for folks brings more diversity…” Stoller says. Noting that the fair is always looking for things that are “outside the norm” and asking what will attract attendees. The race, which took place at 8 a.m. on Saturday, provided pre-registering runners with a free T-shirt as well as free admission to the fairgrounds on that day.

Another part of the fair's success was the carnival, operated by Crabtree Amusements Inc., a family-run carnival company since 1978. The Arctic Blast was among the most popular rides. Making carnival attendance easier this year as well, was Crabtree's use of Magic Money, an RFID wristband system that is both reusable and reloadable. The wristbands use electronic credits and replaced the use of Crabtree's traditional metal tokens in the carnival. The bands could be reloaded at kiosks, Magic Money booths or by downloading the app. The app was found especially useful by fairgoers according to carnival officials, as monitoring balance and reloading credits could be done from anywhere via phone.

Magic Money transactions reloads could be done with credit or cash; with unused credits saved for next year. Packages were available in $20, $40, or $60 increments for first-time purchases, and could be reloaded for any amount at no additional charge; initial purchase of the RFID card included a $2  fee.

Youth admission pricing was slightly lower this year, moving from $7 to $6; however adult pricing increased from $10 to $12. Children under four were admitted free. A fair Mega Pass was $125 and included both general admission and 11 days of unlimited rides; Unlimited Ride Wristbands were $35, and carnival ride individual tickets were $1.25.