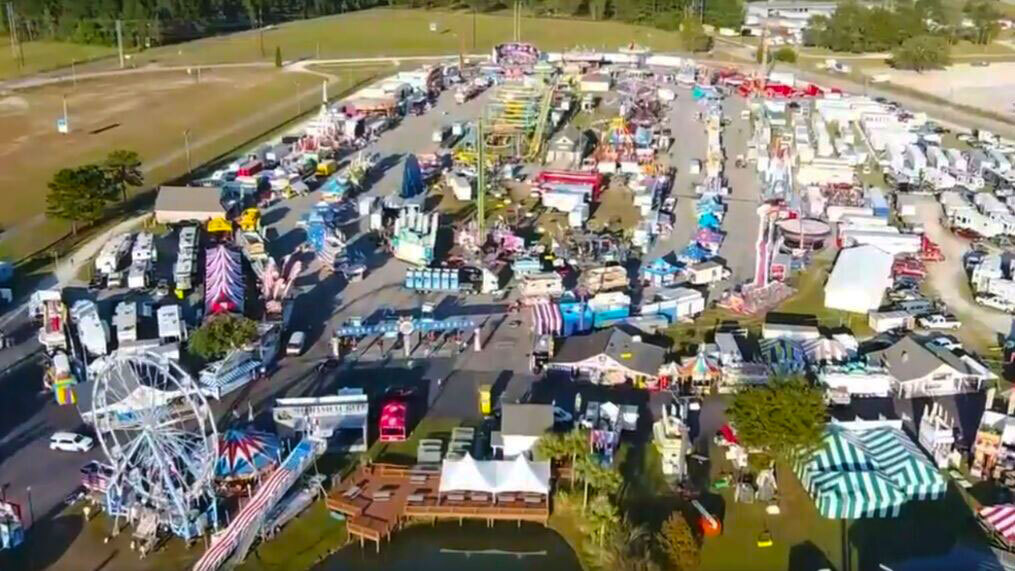 While hundreds of thousands attended the 2021 Coastal Carolina Fair, lingering COVID concerns plus rainy days suppressed turnout, but not the atmosphere of fun and gratitude fairgoers excited to be back at this annual tradition.

This attitude was not felt solely among attendees, but fair stakeholders and partners. Perhaps chief among them was Rob Vivona, General Manager, Amusements Of America, who claims that if it wasn't for a rained out second Saturday, “We were on pace for it be a record to year. That's always a huge day for us.”

All Hands On Deck

And, he should know. Amusements of America has been playing the Coastal Carolina Fair for well over half-a-century and this year “attendance was great, we did awesome the days we were open. We didn't know what to expect, but from the first day we had lines. It's a very well-run fair, and they get great crowds.”

It's also the last major event of Vivona's season, when the company's units converge. This annual reunion had a special significance because, not only was one of the most challenging ordeal carnival companies have ever endured was coming to an end, but finally the major impediment afflicting the industry's comeback year – the labor shortage – finally found some relief.

“The entire Vivona family was together,” he said. “It's really been two years since everybody saw each other. We were like every other carnival company, we couldn't get the help we needed. So, as soon as you finished driving the truck you had to start setting up rides. But finally [at the Coastal Carolina Fair], it was all hands on deck and we finally had the amount of staff our midway needed.”

The 2021 midway layout was also redesigned by creating two separate kiddielands, situated on either side of the main midway. The new design included more space between the rides, allowing for social distancing and enhanced queue-line management. “The new layout worked out better. We were able to keep the kiddie rides together, instead of within the main midway.”

The two children zones were separate but equal, with the same number of rides as well as each with its own Ferris Wheel and Merry-go-round. “We added additional areas for kiddieland rides which allowed more space for families,” said Gary Leonard, Spokesman, Coastal Carolina Fair.

Spending was robust at the fair, but heavy precipitation negatively impacted attendance, a decline of approximately 46,000 compared to the pre-pandemic fairs. The 2021 fair attracted 177,297 attendees—in 2019, turnout was 243.864. “We had three days of bad weather of which one was our last Saturday,” lamented Leonard, but who also pointed out that “The 2nd Sunday of the Fair was a record day. After a two year absence due to COVID, we certainly saw the community interest in attending the 2021 Coastal Carolina Fair. Overall, we felt it went great.”

Other than the tallying of fairgoers, attendance was also plagued by a surge of ticket counterfeiting. According to the local press: “so far this season scammers have obtained more than $10,000 worth of fair tickets purchased online illegally with stolen credit cards,” resulting in hundreds of fairgoers who did not find out they were duped until they were are at the admissions gate. Leonard, declined to comment more comprehensively about the fair's ongoing counterfeit ticketing woes, other than warning of this growing industry problem. “I can't go into much detail but here's something that needs to be shared. Don't buy tickets that have been resold on Facebook, Craig's List, unauthorized websites, from unknown sources, etc.”

The main reason for the drop off was the labor shortage. “Several vendors did not return because of their inability to get the number of workers or the supplies that they needed,” said Leonard. “We had a few less spaces to offer due to the fair-wide effort to spread out our rides and attractions for COVID protection reasons.”
But the attendance dip had little impact on F&B sales. People who came ate and drank. Food spending was up 38 percent compared to 2018. “Vendors were very pleased,” said Leonard.


The fair's marketing tagline used a playful, rhyming hook reminding the community of why they go to fairs – “Back to Fun in '21!”

Supplementing the lighthearted marketing campaign – which in terms of spending and media advertisement placement, closely adhered to 2019 strategies – was a more somber publicity outreach that emphasized health and safety.

“Our ads, media appearances and social media platforms, informed the public of any mandated and recommended health practices that we have implemented in the past and CDC and DHEC recommended protocols,” said Leonard. “We provided 37 hand wash stations and purchased an additional 80 hand sanitizing stations. In air conditioned exhibit halls, UV air purification systems destroy microorganisms on surfaces. Fair staff , contractors, vendors and volunteers has also implemented additional health and safety procedures.”

On the fair's social media platforms, engaging fairgoers meant a more informative approach. “We used social media more frequently to keep our patrons aware of weather conditions impacting rides and entertainment,” he said. “We also kept them aware on where and how to buy legitimate gate and ride tickets.”

The Coastal Carolina Fair was always on track to have a 2021 fair, avoiding a truncated and overfly stressful planning stage that plagued many other fairs this year. According to Leonard, “it was our always plan to be operational for the 2021 fair when it was scheduled to open on October 28. Our facilities were ready, we stayed in touch with our vendors, actively monitored the infection rates for our tri-county population and contacted state and local health officials, our medical community and first responders to make us aware of their concerns and issues for opening the 2021 Costal Carolina Fair.”

Taking place in autumn also enabled the organization to observe what other fairs were experiencing, and what pitfalls were emerging. “Our fair management team talked with other fairs about COVID procedures and modified them to meet our needs. In general, we were informed that attendance would be down but revenues up. Our experience was similar.”

With all the struggles and uncertainties – as well as a few downpours – that the fair had to navigate, did the 2021 event meet expectations? “In general, our goals were reached to have a safe, clean and fun fair for our patrons,” said Leonard.

He added that he was not aware of any COVID cases being traced to back the fair. “Our [area's] numbers have been steadily going down.