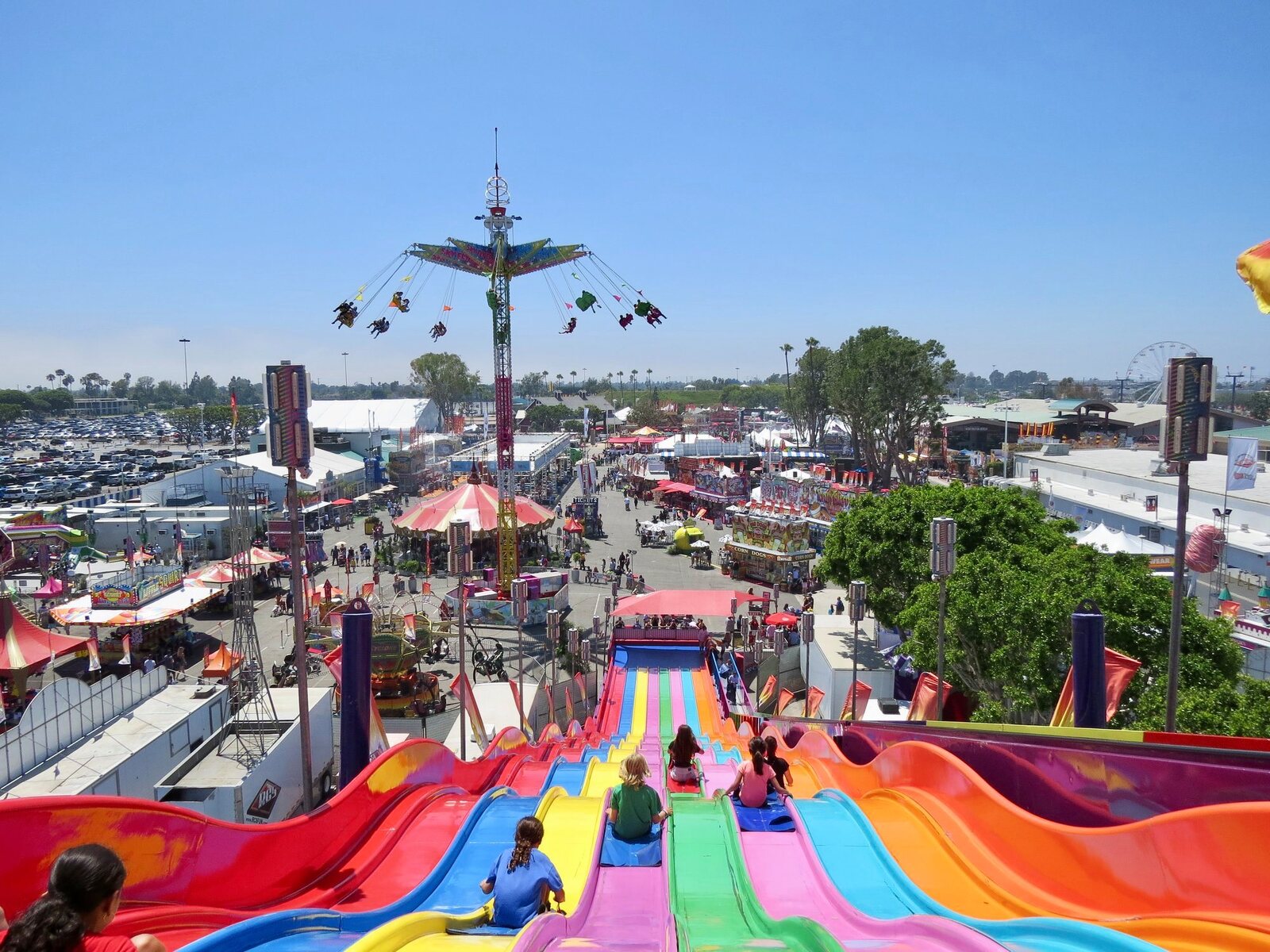 The OC Fair will Run July 16 - August 15 in Costa Mesa
The fair will be held in person this year with an approximate 45,000 daily attendance cap, and slightly fewer rides, vendors, and attractions. Photo by Steve Hinz.

Davey Helm of Helm & Sons Amusements – along with every other California-based carnival company – has marked April 30 on his calendar. That's the date for the expected reopening of Disneyland and Disney's California Adventure Park.

“That's the biggest date, because when they open, everything will be easier, it will be like a snowball going downhill,” said Helm. “There's no larger entity in California, and it sets the standard. There will be a huge rollback in restrictions.”

For most in the fair industry, this anticipated rollback cannot come soon enough. California and other western states have been nearly completely shut down since last March.  Some California Fairs, such as the OC Fair, confirmed it will run July 16 – Aug. 11, while most are still on the fence. Several fair boards have decided to cancel for 2021 – including: Ventura County, LA County, San Diego County, and Santa Clara County.  Editors note:  It was previously reported that the Alameda County Fair had cancelled.  It was brought to our attention that the fair has yet to make a decision.

As of mid-March, Helm has eight confirmed dates, 21 that are “tentative” i.e. confirmation pending, and 34 cancellations, 33 of which are back-to-back cancellations – fairs and other events that will have gone two years in row with no midway revenue – the other cancellation is the Colorado River County Fair, the only full midway Helm & Sons operated last year.

“It's going to be a challenge,” said Helm. “There will be a lot of hiccups and there's still potential closures. But you don't get into this business if you can't overcome obstacles and adapt. Being a showmen means that you no matter what happens, you overcome and adapt.”

Adapting defined 2020 for Helm and many other carnival companies, particularly those with routes laden with California stops. Helm & Sons Amusements scrambled for work, creating a variety of innovative gigs, which ranged from contracting with sports stadiums for parking lot still dates to partnering with food vendors for a the drive-thru fair food events.

For these stadium stops in the ultra-restricted California market, the company's plan included a meticulous midway plan ensuring social distancing, hand sanitizing stations, sanitizing crews and minimized touch points – the latter enhanced by the Magic Money cashless system, which the company introduced at the Colorado River County fair last year. But many communities turned down his still-date pitch.

“For every one event we got, four or five said no,” he said. “But people came out for the ones we did. The Drive-Thru events developed a following. Celebrities came out, people were traveling far distances to come. They all want to be out.”

At some spots, Helm set up and operated rider-less rides. “People would watch them run, take a selfie. It was a way to keep our brand relevant.”

A large part of this new relevancy was to think outside the box, and outside the state. Helm customized a parking lot midway for a resort hotel in Scottsdale Arizona. Helm approached the hotel with the idea – guests are billed a flat rate, which is an even split between the partners. After a tryout proved a success, the midway includes a giant wheel and four kiddie rides.  Helm & Sons has been contracted for quarterly still dates in Scottsdale. 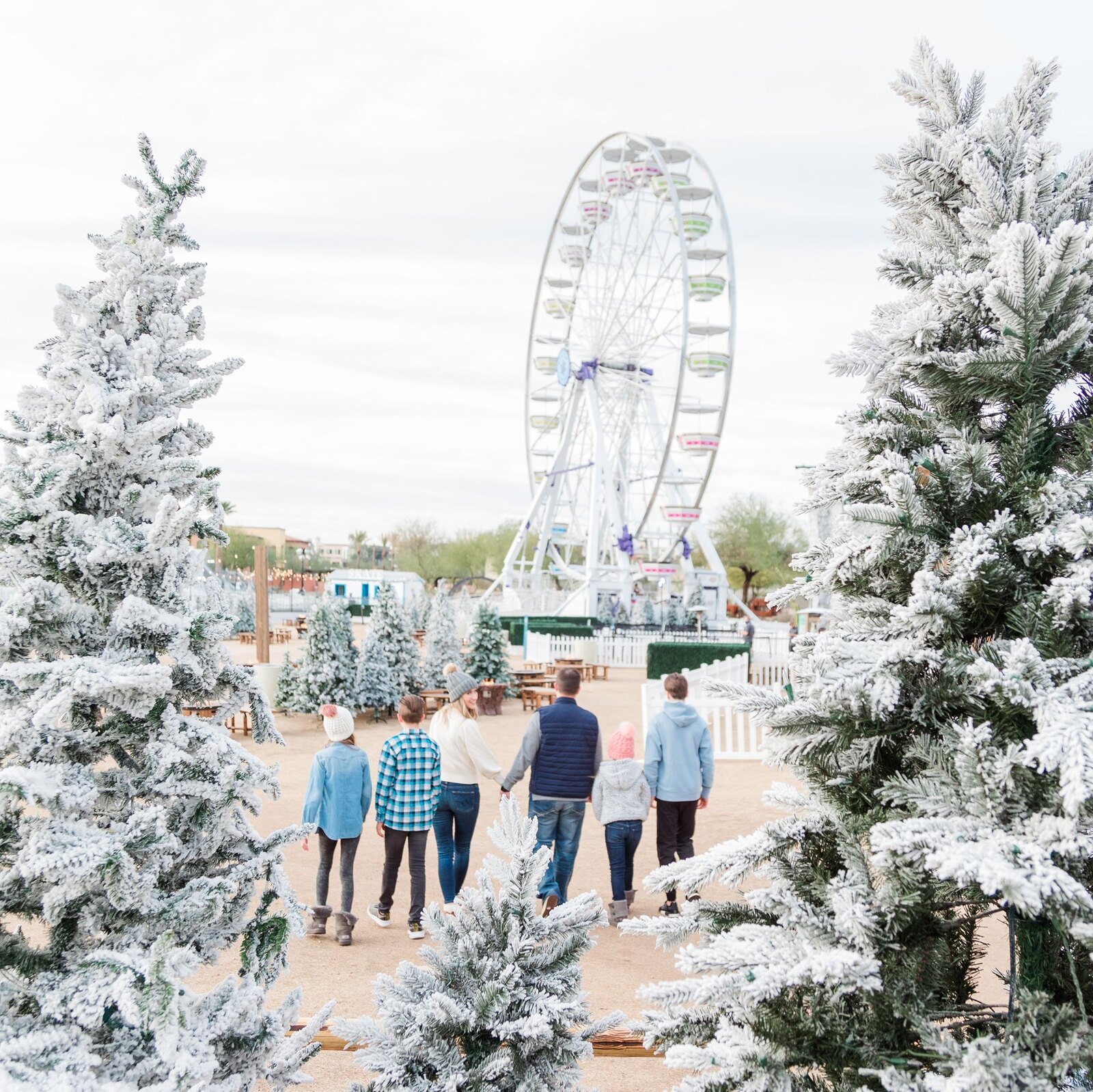 “I never felt we were in a hole, just a setback. We took a real hard look at our business model, and we sharpened our pencils and retooled the entire business. During COVID, as bad as it was, I feel everything happens for a reason. The team we've assembled over the years are able to do the things that needed to be done, and that I take as the real blessing.”

Easter weekend, Helm & Sons Amusements will be playing Ontario California, where he is setting up the midway in an event categorized as a theme park, complying with the current, state-mandated reopening stage. It will be the first large midway in the state since the lockdown.

“It will be a large show, 20-to-25 rides, 15 games and 10 food stands,” he said. “We're still waiting to hear from the county what will be the capacity restriction, but I don't care if it's 15 percent capacity. I'm just glad to be open.”

Harry Mason, CEO of Brass Ring Amusement aka Midway of Fun will be at the Mount Shasta County Mall Spring Fling event, one of the first still dates in California in 55 weeks. “I'll be the first guy to open,” he said. “I'm doing a lot of still dates. My fairs for early 2021 have canceled up to August, but those dates after are still intact as are still dates and some festivals.”

He added, “I'm ready to go back to work. I'm feeling like the end is nigh. We got this under control with more people getting vaccines and soon I'll see more of a semblance of my season. Maybe not 100 percent, but it will be better. By mid-April the worst of it will be in the rearview.”

During the worst of last year, Mason found something close to home to lessen the inertia.  He approached an economic development association in Sacramento with the idea of enhancing the destination value of the “Old Town” district by setting up a mini-theme park. In June, Midway of Fun brought a sample of midway fun with a Ferris Wheel and Carousel conveniently located in a scenic waterfront neighborhood.

The debut during a Festival of Light, then was operated from Halloween to the first week of December, when state home orders were reinstated. By mid-January 2021, eased restrictions have meant that the Midway of Fun was again infusing energy, good vibes, and a positive economic impact to Sacramento. 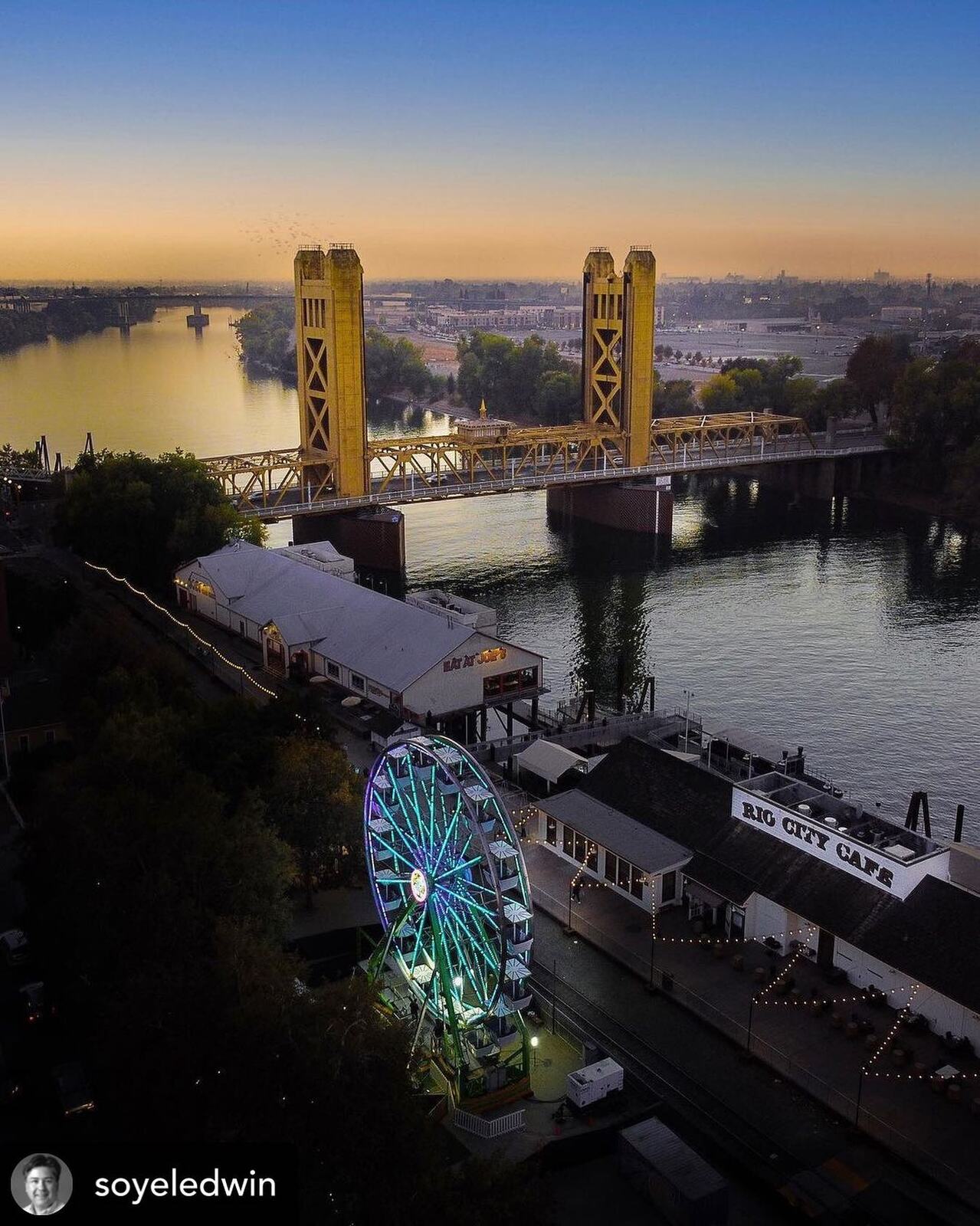 The ride selection was purposeful – a big wheel and merry-go-round are eye-catching, perennial favorites as well as easily modified to follow socially distanced guidelines – and Mason adapted his Magic Money cashless system to the mini-theme park format to ensure an entirely contactless and touch-free transaction environment. It was also another link in the chain of establishing a demonstrable assertion: outdoor amusements can be operated safely during the pandemic era.
One Midway of Fun unit will be on the road by mid-April.  The company has also expanded its non-California circuit with the Nevada State Fair in June and a first-ever date in Utah.

During the layover, Mason's crew busied themselves by refurbishing nearly the entire ride arsenal. He's most excited to see the customer response to the glisten and hum of just-like-new rides, including a Starship 2000, Zipper, Viper and a Roller Coaster. 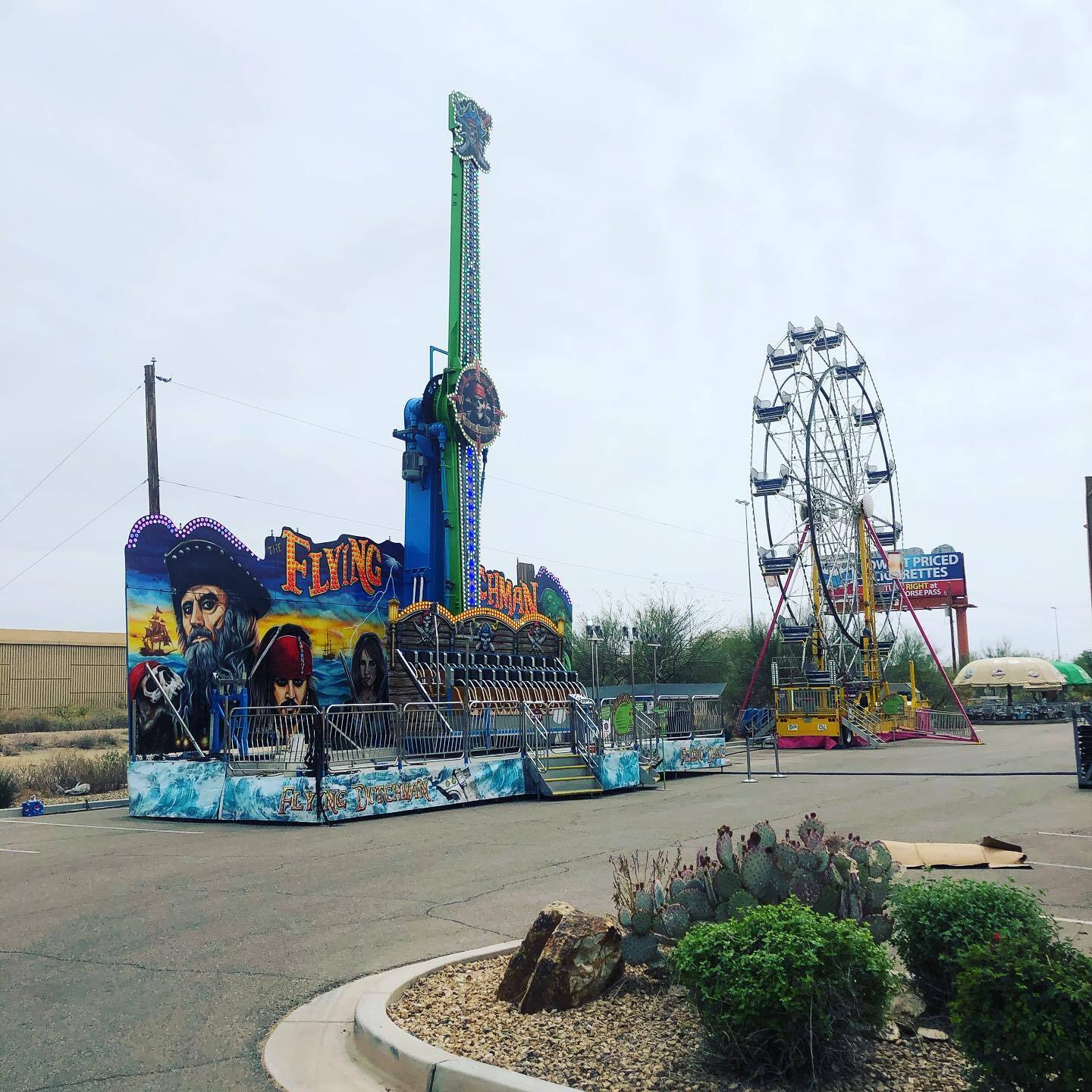 One of the leading midway providers in the U.S.,  Ray Cammack Shows' route includes Texas, California and Arizona, where it is based. This industry colossus had set up at the massive Houston Livestock Show & Rodeo in 2020 when COVID shutdown the entire event mid-fair.

Within days, the states of Arizona and California cancelled all live events and the entire 2020 season evaporated. In the aftermath, RCS drastically downsized, sending a small unit in search of still dates in the heretofore uncharted terrain of North and South Dakota. RCS collaborated with fair partners and participated in Food Drive Thru events many had formed after the main fair had cancelled.

“The pandemic has had this fluid effect on our operations,” said Ben Pickett, Vice President, RCS. “Plans continue to change. We are still optimistic that things will be able to happen in a safe fashion.”

He admits that the company had to “get creative with our business model. We had to use smaller units and play more events than we're used to. The pandemic really forced us to work outside of our business comfort zone.”

In 2020, for RCS that comfort zone quickly went from streamlining operations to a version of Honey I Shrunk The Kids! Typically an RCS unit consists of 75-85 rides, 60 games, and 30 food stands and upwards of 400 employees. The still date unit features 15 rides, 10 games and seven food stands.

In February, the company augmented its makeshift still date circuit with a new outdoor event, Wickenburg Western Days, in Wickenburg, Arizona. This festival was actually a replacement event for the annual Wickenburg Cowboy Days, which was cancelled. The midway's plan, which adhered to CDC guidelines, had to be approved by local health officials, and the event was supported by the community, but had to be produced outside the auspices of the Wickenburg Chamber of Commerce.

RCS sent a modified unit there – the first time the state's largest carnival company had set up a midway in this rural community. “We've put out a small arsenal of rides so we can play other dates and small events around the Phoenix area,” said Pickett. “But we're optimistic that most of our usual dates will happen later in the year. In the meantime, we're staying creative.”

On March 25, much of Pickett's optimism was rewarded. One of its biggest California fairs of the year – the OC Fair – made it official and announced the 2021 dates of the fair: July 16- Aug. 15.

The press release reads: “The theme is "Time for Fun," celebrating the joy of the return of Southern California's favorite summer festival…. OC Fair officials have been working closely with public health agencies to develop protocols to keep fairgoers safe while bringing back carnival rides, fair food, entertainment, competitions, animals and more to fair fans. The plans for the 2021 OC Fair are based on health agency projections for the summer, but could change if warranted by public health conditions.” 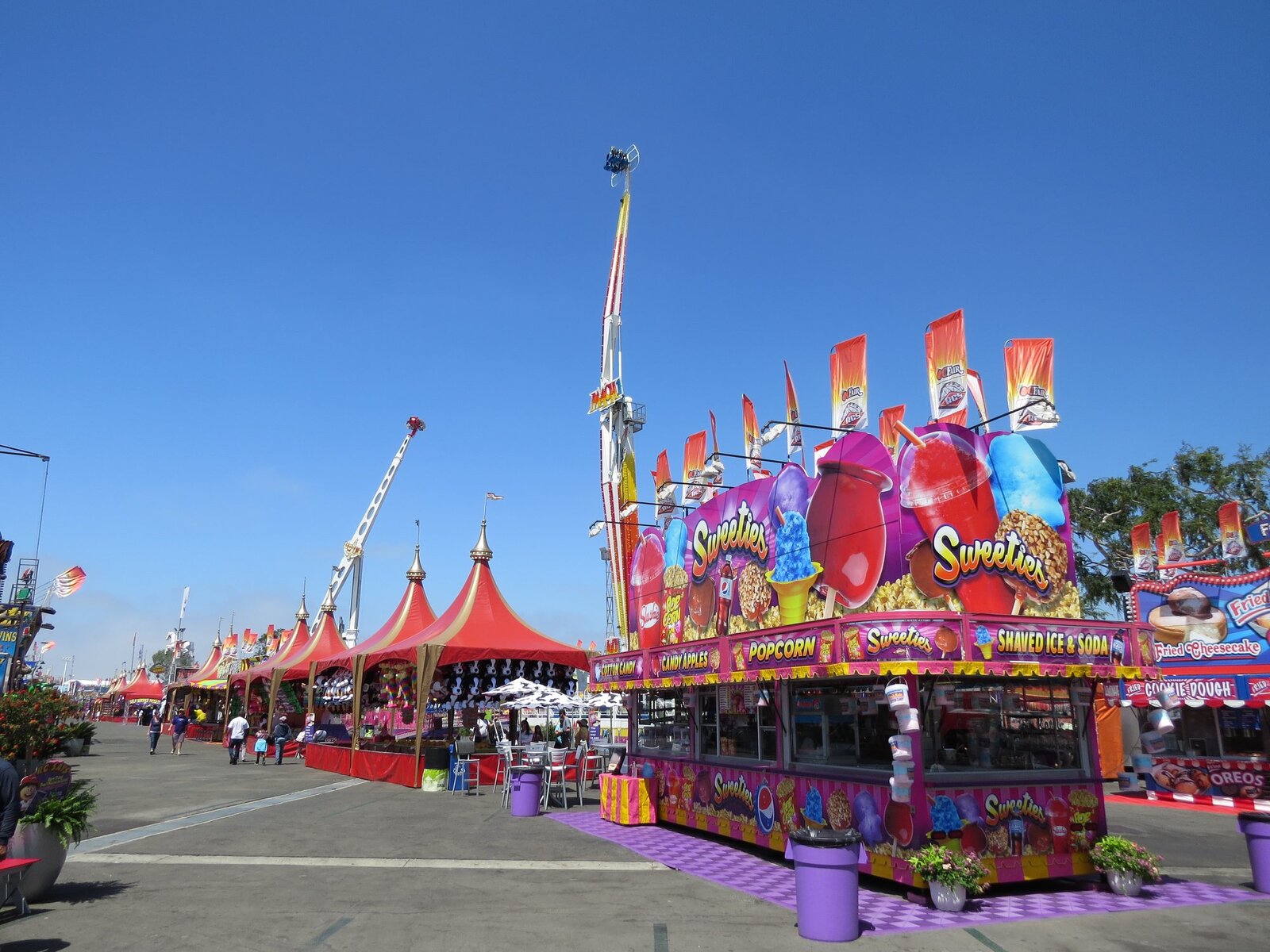 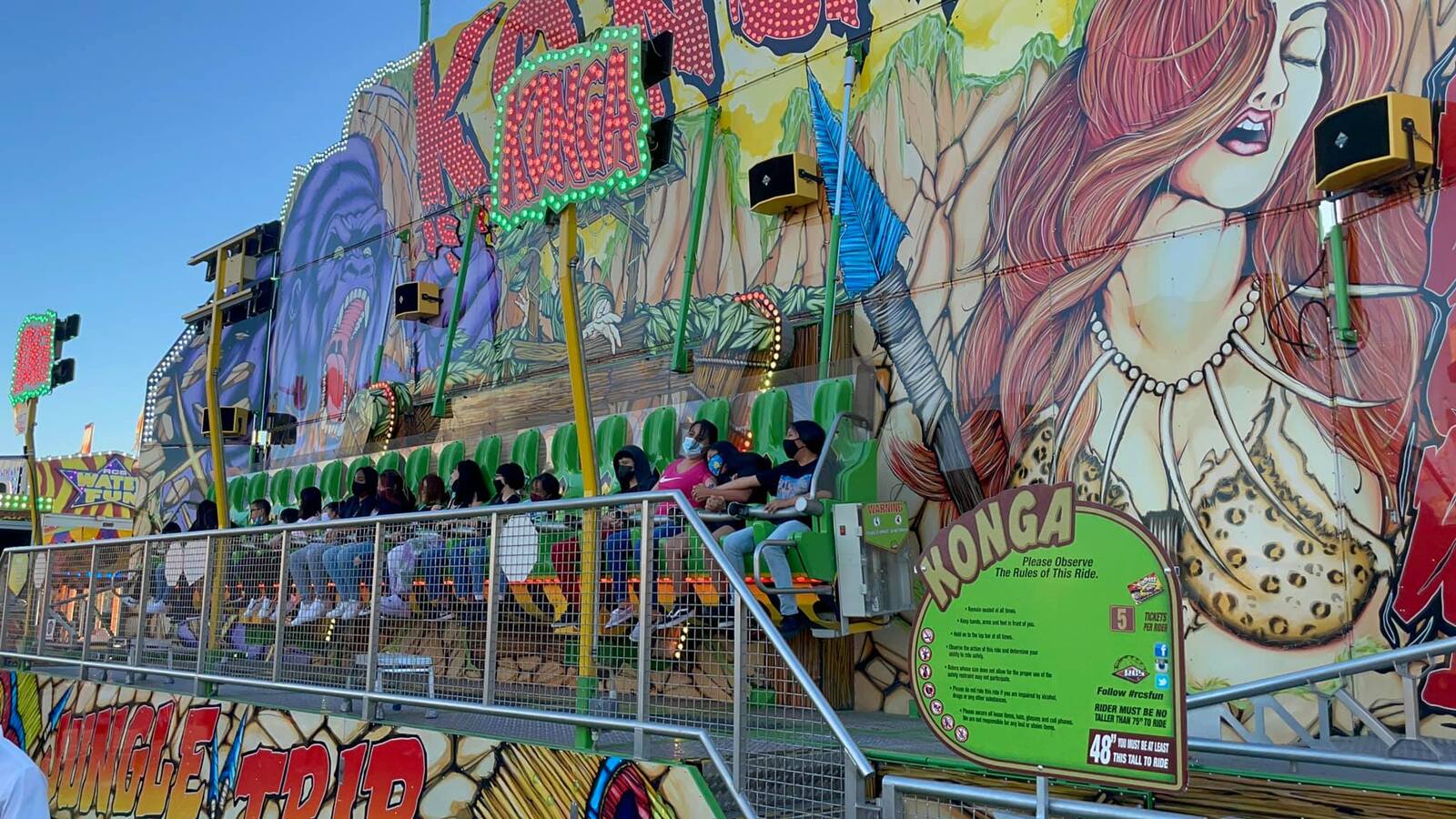 The fair will be held in person this year with an approximate 45,000 daily attendance cap, and slightly fewer rides, vendors, and attractions. Photo by Steve Hinz.