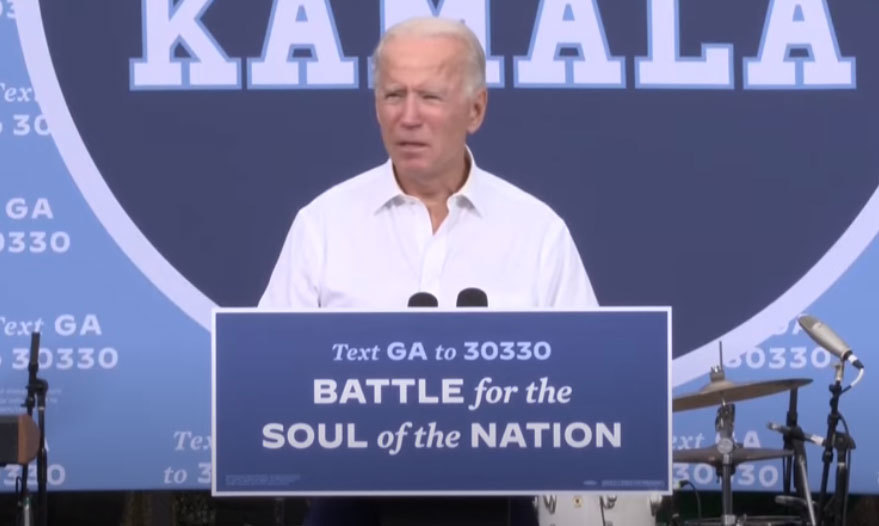 On Tuesday, Presidential candidate Joe Biden compared President Donald Trump's administration to a carnival worker that is having a difficult time tricking customers out of their money at rigged games.  The remarks came during a drive-in rally for the former Vice President in Atlanta, Georgia.

"It doesn't take long for people to figure out when the game is up," Biden said during the rally.

"You know, when the carny show goes through town the first time and people find out there's no pea under any one of the three shells, the next time it comes back it doesn't get much attention," he said. "Well, that's what the Trump administration has done."

This isn't the first time Biden has compared the Trump administration to a “Carny Show”.  In January, during a town hall event in Indianola, Iowa, Biden made similar remarks stating “This carny show came through town once, and they found out there's no pea under any one of the shells,” Biden said to voters.

In an industry that has been plagued by stereotypes, the term carny has often been deemed a derogatory word for workers who operate games, food concessions, or rides at carnivals.  In the last two decades, the industry has worked tirelessly to distance itself from such stereotypes in an effort to clean up the public perception of carnivals with the public.  Employers have expanded background and drug testing, instituted employee uniform programs complete with photo IDs and matching shirts and hats, and expanded on employee training.

Often overlooked, the carnival industry as a whole provides millions of dollars in annual revenue to non-profit organizations such as churches, civic organizations, private groups, and county and state entities.

Biden's remarks were not taken lightly by those who work in the industry, with many taking to social media Tuesday to voice their opinions on the derogatory comparison.

“I feel it is a deep-seeded, negative stereotype to be labeled in a desperate attempt to be relevant by a clueless candidate,” said Goodell.  “ I have worked in this industry for most of my life and my children (including my oldest who is serving in the Marine Corps) were raised in this industry. I find it pathetic and frustrating to know that the man who thinks he is best suited to run our country would consider "carnies" to be something less than desirable for comparison”.

Katie Adams Lowe, who was born and raised in the carnival industry, felt that Biden's remarks were uncalled for.  "I feel like he is discriminating against us.  He's not setting a very good example for the lefts alleged tolerance for people of all walks of life."

Lance Gifford, owner of The Magic of Lanc Gifford & Company,  who entertains thousands at fairs and festivals up and down the east coast, weighed in as well.  “I think his comments shine a bad light on our industry and our livelihood,” said Gifford. “We are an industry that provides fun family entertainment and his comments portray us as bad people instead of the hard working, dedicated showman that we are”.

On Wednesday, the Outdoor Amusement Business Association released a statement asking Joe Biden to stop using stereotypes in his campaign.

“Our 2,000 members are primarily family owned businesses that provide employment for more than 200,000 people and provide quality family entertainment at state fairs, churches and other venues throughout the United States each year,” said Greg Chiecko, President and CEO Outdoor Amusement Business Association. “A term such as 'carney show' is a pejorative stereotype that does not accurately reflect the nature of our members' businesses or how they conduct business.

“What is really ironic,” said Chiecko, “Is that Biden claims to understand and represent Americans who earn their paychecks through hard work. I would invite the former vice president to spend some time with members of our industry who work from dawn to dusk during the carnival season. Most of our members are operated by families who have worked in our industry for generations.

“Many organizations throughout the country utilize our rides, games and food service as a component of special events that each year raise millions of dollars for charities and other non-profits.

“The negative stereotypes the former vice president utilized to describe them are not only inaccurate, but they are unfair and insulting,” said Chiecko. “We recognize that this is a hard-fought campaign, but we are asking candidate Biden to choose his words and examples more carefully and to not repeat these negative, inaccurate stereotypes going forward".

While many states have begun early voting, the final day to vote for the 2020 presidential election is November 3.  To find out where to vote, click here.