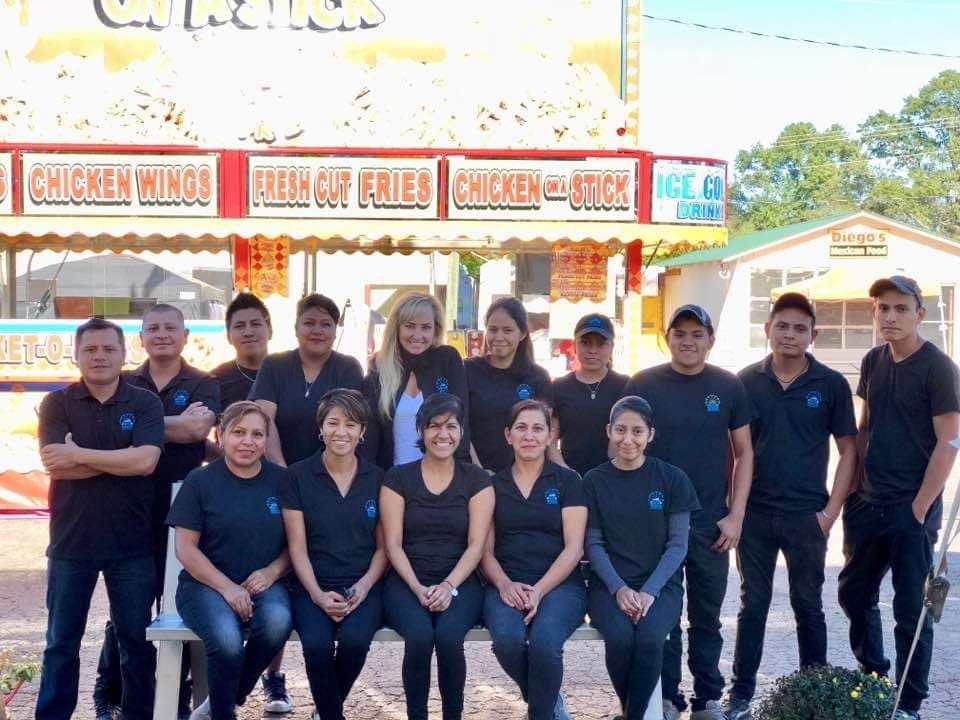 H-2B Workers
A group of H-2B workers from Big Rock Amusements pose with one of their US managers prior to opening at a festival in 2020. Big Rock was capped out in 2021 and hoping for additional relief from the Biden administration.

For many carnival companies, it's almost business as usual labor-wise. Their H-2B workers – the second-half-of-the-year batch of guest foreign workers are already arriving.

But due to soaring requests for guest-worker visas, many carnival companies were crowded out of their usual allotment of workers. Unless the Biden Administration implemented some form of cap relief, their route and the fairs which rely on midway revenue – most of which were cancelled in 2020 due to the coronavirus – were in jeopardy.

For now, a 2021 capped out crisis has received a small amount of relief, but not nearly enough to satisfy demand for 2021. On April 19, the Wall Street Journal, Reuters and Bloomberg  reported that the Biden Administration is releasing 22,000 additional visas, described as in time “for the summer season,” although exactly when is unclear. These additional visas will provide some relief. It's about 10,000 fewer extra visas than the Trump administration eventually allowed, although that decision was rescinded due to the pandemic.

The extra visas will provide a short term solution, but falls short of the actual need projected by many industry experts. It's less than a third of the supplemental visas that are allowable under current law and will still leave about 40,000 positions capped out across all industries who applied for H-2B workers.

The growing inability to create and maintain a stable workforce is potentially the most devastating issue facing carnival companies, and by extension, the fairs, festivals and other outdoor events they service. The fact is that workforce recruitment has plagued midway providers for years, with crisis conditions looming system-wide while also impacting individual employers.

Belle City is one of those companies who fall into the category every carnival company dreads – being capped out.  Due to a jump in demand for workers, there's been a huge uptick of carnival companies as well as other H2B employers who literally lost the H-2B lottery. According to Greg Chiecko, President and CEO, Outdoor Amusement Business Association (OABA), this capped out increase has been due to more petitions for visas being filed this year than ever before.

“Currently there are about four times the number of applications for H2B visas than H2B visas available,” said James K. Judkins, President of the JKJ Workforce Agency, who facilitates the various processes involved in the acquiring of guest workers for carnival companies, concessionaires and circuses.

“For the first half of the fiscal year, the demand has increased so each year the cap hits earlier and earlier, meaning that a few years ago if an employer had a start date of February 15 they would probably "beat the cap" and workers would be available. Then the cut off moved up to about February 1. Last year (2020) it was about January 15. This year (2021) some employers with a start date of January 1 were capped out.

According to Judkins, this near-crisis of 2021 is due to the continued increase in demand for seasonal workers offered by the H-2B program, a result of fewer US workers being attracted to the type of jobs offered by H2B employers, such as carnival companies where workers must be on-the-road, away from home for half-a-year and more.”

Another factor is due what he describes as the “the technical nature of the program and the strategic planning that has become part of the competition for visas.”

Under the H2B program 66,000 workers are permitted, split into two six month allotments 0f 33,000. The actual need, likely exceeds 100,000. In 2019, the Department of Homeland Security allowed an additional 33,000 workers – i.e., cap relief – and under current law, has the power to allow up to 69,000 additional visas. Not only does additional cap relief seem unlikely in the short term, but the structural composition of the current system is causing worker shortages for companies who lost the biannual Visa competition.

Judkins explained: “If an employer was capped out in April 1, 2020 and no supplemental visas were issued (due to Covid none were released in 2020) but the employer was open and operating until October 31, or December 1, they may have applied for workers for October 1, 2020 through the end of their normal season.  If they were approved and the workers were issued visas to work the 1 or 2 months, then the workers would be considered "cap exempt" for an April 1 filing as they had already been issued an H-2B visa in fiscal year 2021 and had counted once against the cap.  This artificially increases the demand on the first half of the fiscal year and is a factor that causes the cap to hit earlier and earlier in the first half of the fiscal year.”

For some H-2B-reliant industries, such as forestry and landscaping, there was less pandemic-related disruption. The carnival business was not so fortunate, as many fairs and other events cancelled and proving a genuine need for more additional workers was difficult. Judkins reported that the United States Citizenship and Immigration Services (USCIS) and DOS (Department of State (DOS) have been actively checking to ensure that there was a valid need for workers.

Judkins observed, “If the employer states that the workers will be at the Jonesboro County Fair and the Fraud Investigation Team at the consulate goes to the Jonesboro County Fair website and it says "2020 Fair Cancelled, see you in 2021" then the visas are not issued, the petition is remanded, the employer just spent a great deal of money and did not solve any potential problems and only created problems.”

He added, “a larger number of mobile amusement employers with start dates prior to April 1 were capped out this year for the reasons just detailed.  When an employer is capped out they get zero workers, must cancel their labor certificate and then refile for the second half of the fiscal year, starting on April 1. And.... there have been applications for over 100,000 visa slots for the 33,000 visas available, so statistically for those who needed workers in the first half of the year and were capped out, and those who needed workers for the second half of the fiscal year, they only had a 33 percent chance of getting across the finish line and getting the workers required.” 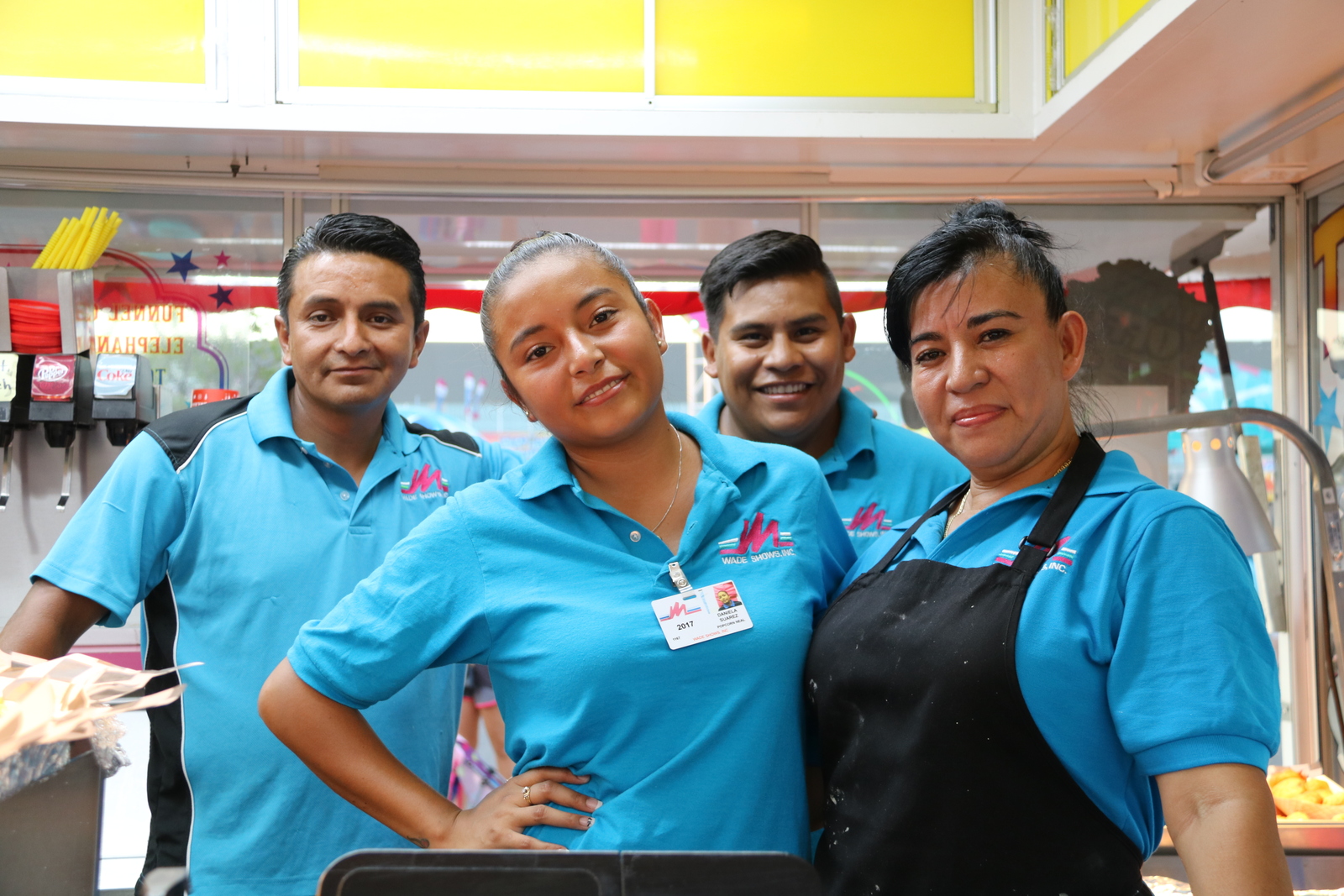 For Belle City Amusements, the lack of workers nearly jeopardized his entire season, and the threat is far from over. The company's season is structured so that the winter and spring are busy with mainly Florida dates, then there's an approximately 4-6-week layover until June, when the season again kicks into gear.

Finding the workers for his Q1 and Q2 dates, which includes the Manatee County Fair, the Citrus County Fair and the Florida Strawberry Festival, was a scramble. For several weeks, he was forced to subcontract to other employers who had sufficient staffing, but whose events were cancelled or postponed.  After that, he took the unusual step of contracting with a temporary worker agency, which according to many industry observers, was heretofore unheard of.

For Charles Panacek of Belle City, “it was new for us, but we absolutely had do it. ”

How viable an option temp workers are remains an open question, and judging from Panacek's experience, there were many drawbacks – the workers needed training before they could properly work the midway, and were unable to travel from spot to spot. He estimates that his labor costs have risen “more than 20 percent” as he scrambled to find labor in order to fulfill his 2021 contracts. “It was less than ideal,” he added.

His travails include having the Citrus County Fair open a day late due to labor issues. “It's frustrating because people are turning out, we are actually having some record midways. We had a record turnout and gross.”

But, if Belle City doesnt receive additional workers from the recent batch released by the Biden administration, Panacek is not sure how he will be able to resume his route in June. “It's a dire situation,” he said.

"Due to the fact that only 22,000 supplemental visas will be issued in 2021 (less than 1/2 that were to be authorized in 2020) it will continue be a struggle for the industry, with less than 50% of those still in limbo eventually getting across the finish line and obtaining workers processed at consulates abroad," says Judkins.

"Other options will be finding cap exempt workers to transfer, but there are not sufficient cap-exempt workers to fill the need.  The uncertainty of the program continues, and permanent fixes must be passed by Congress," he added.

But right now, with COVID still the major concern, some countries such as South Africa and Brazil are limiting travel to the U.S. – any employee from those nations must spend two weeks in quarantine in a third country before entering the U.S.

The other unknown is how will the Biden administration treat the H-2B issue. Under the Trump administration, the foreign worker issue became entangled with the immigration issue. Many chided his anti-immigration rhetoric as confusing the debate, although eventually he did enact some cap relief.

Under Biden, the Seasonal Employment Alliance (SEA), a group working to improve the critical labor needs of seasonal businesses,  has led an intensive lobbying effort, which has found bi-partisan support with letters from more than a dozen office holders, including congressional delegations from Virginia, Maryland and Colorado. The effort has included more than 38 meetings as of April 12th, 294 emails from SEA members to their members of Congress and requests by 34 senate officers to the DHS to release “the full number of visas authorized.”

Following the administrations announced release of 22,000 additional visas, the SEA released a statement via email: “We must be appreciative of the administration recognizing the need of America's small and seasonal businesses while also making clear that the release is insufficient. The demand is for 60,000+ visas. ”

In the meantime, the SEA is pursuing an additional strategy of a Northern Triangle carve out, which would give some special consideration to workers from Honduras, El  Salvador and Guatemala. Studies indicate that an increase in guest workers can alleviate instances of illegal immigration as well as provide some relief from the current border crisis, where an estimated 170,000 immigrants are currently requesting asylum in the U.S.

As part of the proposed program, the individual countries would become more involved in screening and worker training, further ensuring the sustainability of a guest worker program.

“We're busy with multiple  things,” said Michael Wood, Wood Entertainment Company, and president of the Seasonal Employment Alliance. “We're hoping for a definitional change in some job codes that would move some workers from H-2B to H-2A, which are more ag-related jobs. That would free up workers for carnival companies. But last year, the DHS was given the discretion to increase the cap by  69,312. That's the best bet for a short term fix right now.”

A group of H-2B workers from Big Rock Amusements pose with one of their US managers prior to opening at a festival in 2020. Big Rock was capped out in 2021 and hoping for additional relief from the Biden administration.