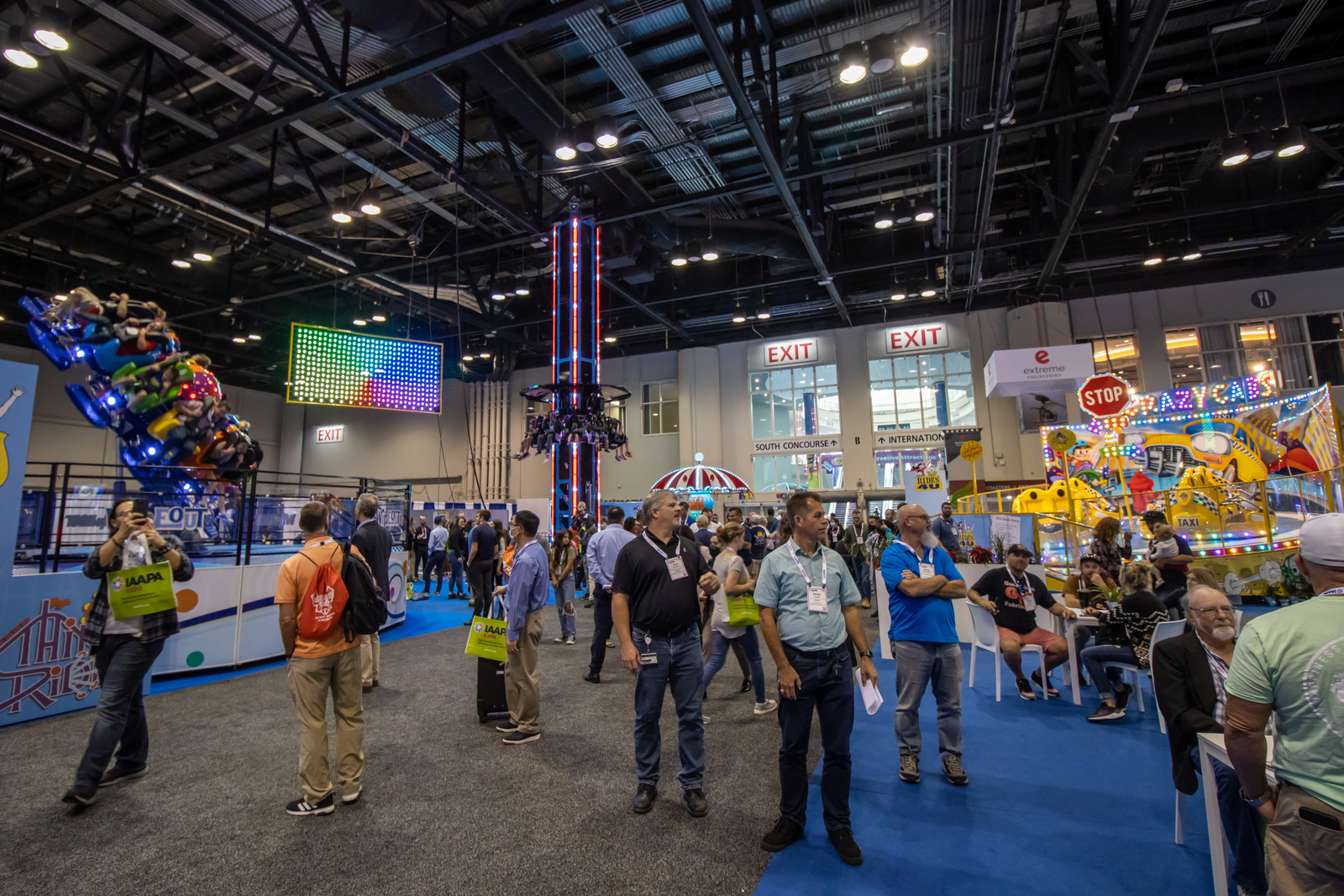 The crowds were back again for day 2 of the IAAPA trade show in Orlando.  Temperatures reached 80 degrees in Orlando and the sunshine reflected the sunny optimism of buyers and attendees.  Although crowds seemed lighter than in a “normal” year, vendors reported solid sales and good traffic.

Some new ride installations were announced at the show in a bevy of press announcements and releases.  Triotech, a creator of award winning immersive and interactive media-based attractions for the entertainment market, announced they would be installing a new attraction at Clifton Hill in Niagra Falls, ON, Canada.

The new attraction, called the “Carnival Chaos Hyper Ride”, is an interactive media-based dark ride.  The Hyper ride was the recipient of IAAPA's Brass Ring Award for Best New Product in the Rides and Attractions Category at the 2021 Expo. 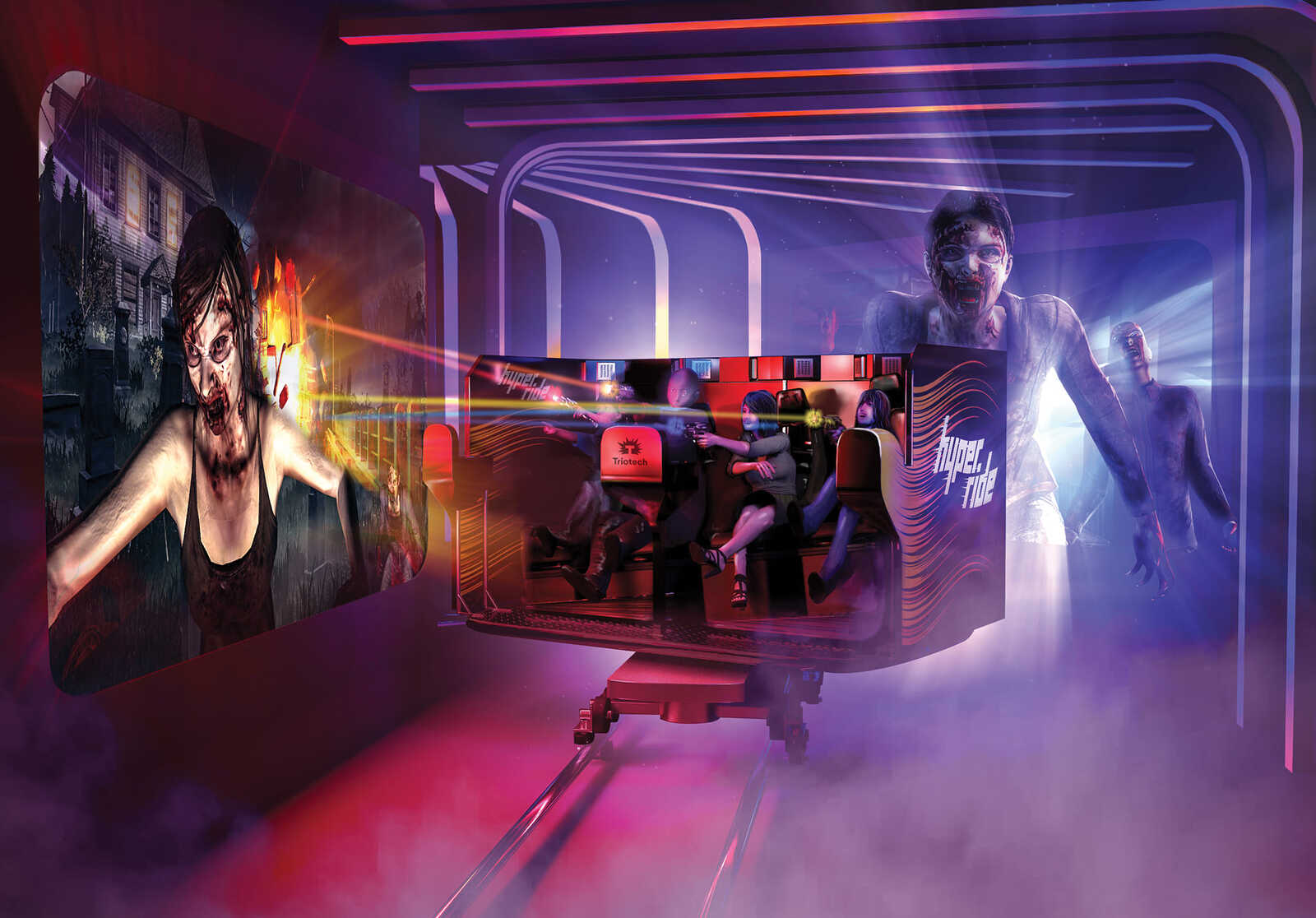 The new ride will feature 7 interactive scenes, 5 carts, and programmable digital theming inside the ride which will span 6,000 square feet.  A Hyper Ride is being showcased at the Triotech booth at the Expo.

Ernest Yale, president and CEO of Triotech, said “For us, it is only fitting to deploy this Hyper Ride, with its unique motion technology, working alongside a solid partner in one of the world's most iconic sites.”.

Located, just one block from Horseshoe Falls along the Niagra River, Clifton Hill features many attractions including Canada's largest Giant Wheel, which provides incredible views of the falls.

The Carnival Chaos Hyper Ride is scheduled to debut in the summer of 2022. 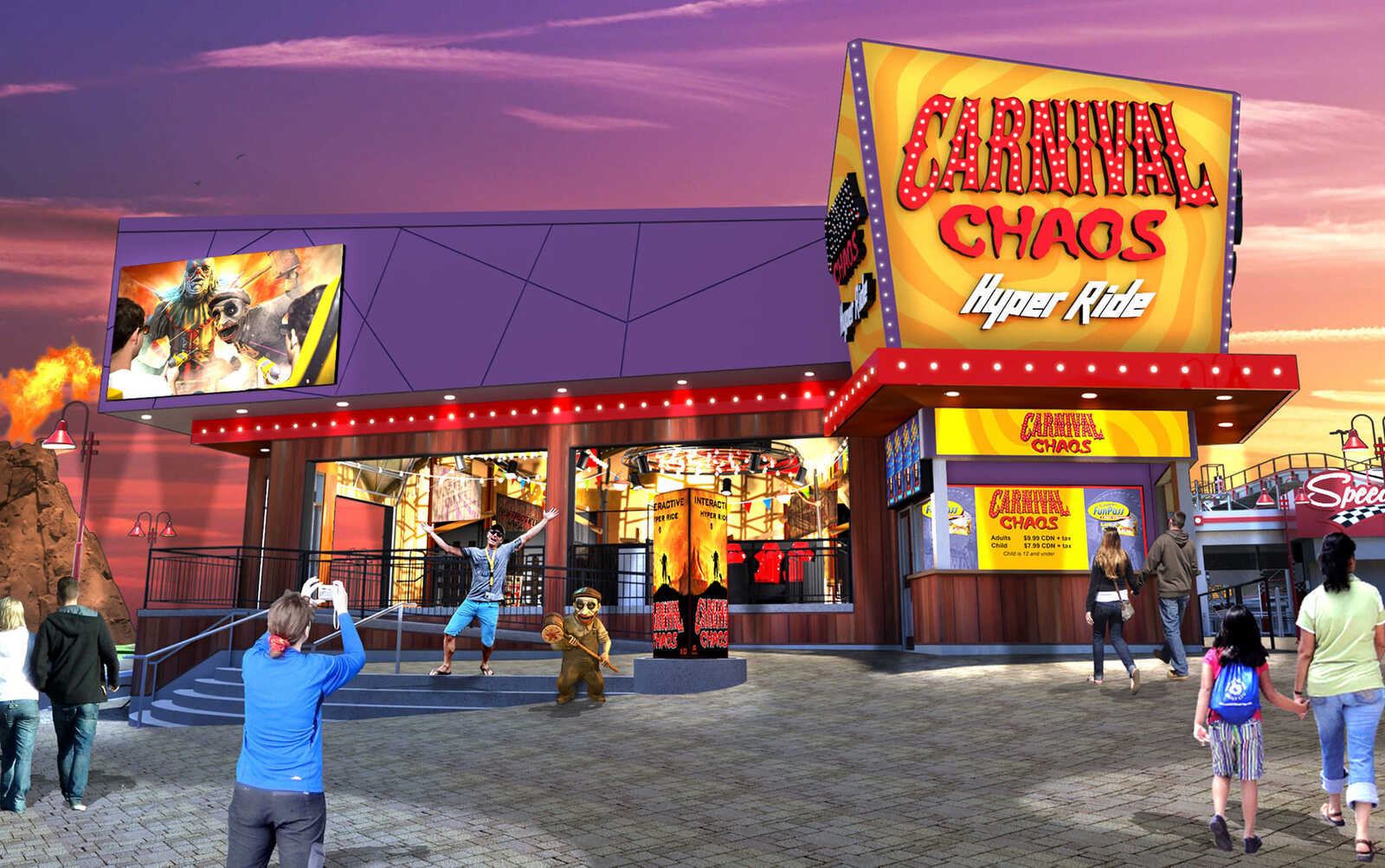 
Adventure Land Park in Altoona, Iowa will be seeing some great new family-focused additions in 2022.  The company has contracts with Zamperla to provide eight new rides to the park.

The Pump and JumpZ will be themed as a lighthouse, providing riders with a 360 degree view of the water near the ride's installation.  The Flying Carousel will be themed “Rockin Rainbow”, taking 48 passengers soaring above the park's Main Street.

The addition of the family attractions will create memories for guests 36”  or taller and most attractions can ride parents and grandparents along with the kids.

2022 looks to give a new family emphasis to Adventure Land Park thanks to its relationship with Zamperla.

Also at Zamperla, they are promoting their Family Thrill Launch Coaster.  The ride features multiple launches, a dead end track, as well as reversing sections to provide thrills for all ages.  The coaster can be fitted with different vehicles including motorcycles with sidecar, motorcycles and trucks.  Truly a family attraction, the coasters have a height requirement of only 42”. 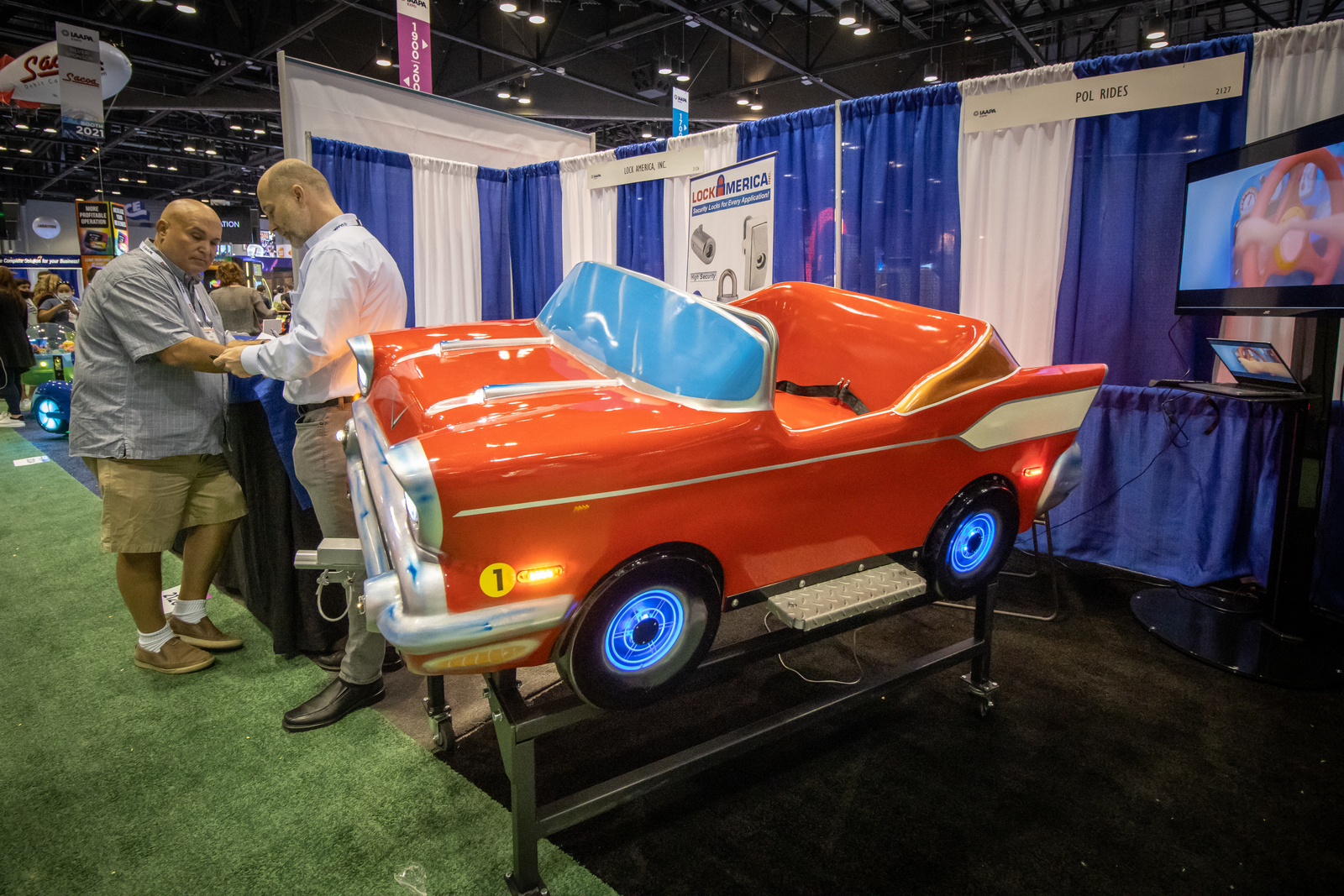 Peter Stolarczyk of POI Rides introduced his new Cruiser Ride at the show in IAAPA.  The new kiddie ride features classic cars and new safety updates in a nostalgic attempt to bring back a classic ride and modernize it.

Stolarczyk, whose brother owns a manufacturing company in Poland, is a long time equipment provider, booking and selling coin-op punching bags to midways, FECs, and parks.  When talking with Larry Moyer at a Showmen's League meeting, he came up with the concept of reintroducing a classic kiddie ride with modern updates.

After speaking with his brother and formulating designs, the ride began to go into production.  The ride uses the design of a mini-himalaya, but with improvements to give a smoother ride by using laser cut rails and providing more room inside so parents could enjoy the ride along with their children.

The new updated ride has 8 cars, seating 16.  Each car has two seat belts and a lap bar for safety.  Lights on the wheels and around the cars provide a great flashy look.  The ride currently is put tougher with a forklift but a trailer mounted design is in the works.  A frequency drive provides a smooth start and stop.

The ride moves forwards and backwards and has horns and steering wheels in each seat.  One exciting new update is placing sensors in the seats so the number of riders can be tracked.  The system can even be connected to the internet so that the data on riders can be accessed remotely.

Deggeller Attractions purchased the first ride and the ride is said to be doing well on the midway.  The company had 6 other models sold before the Pandemic hit, but shutdowns  resulted in contract cancellations.

Once the classic car cruise ride is in full production, POI plans to move to other affordable kiddie land designs such as a jet ride. 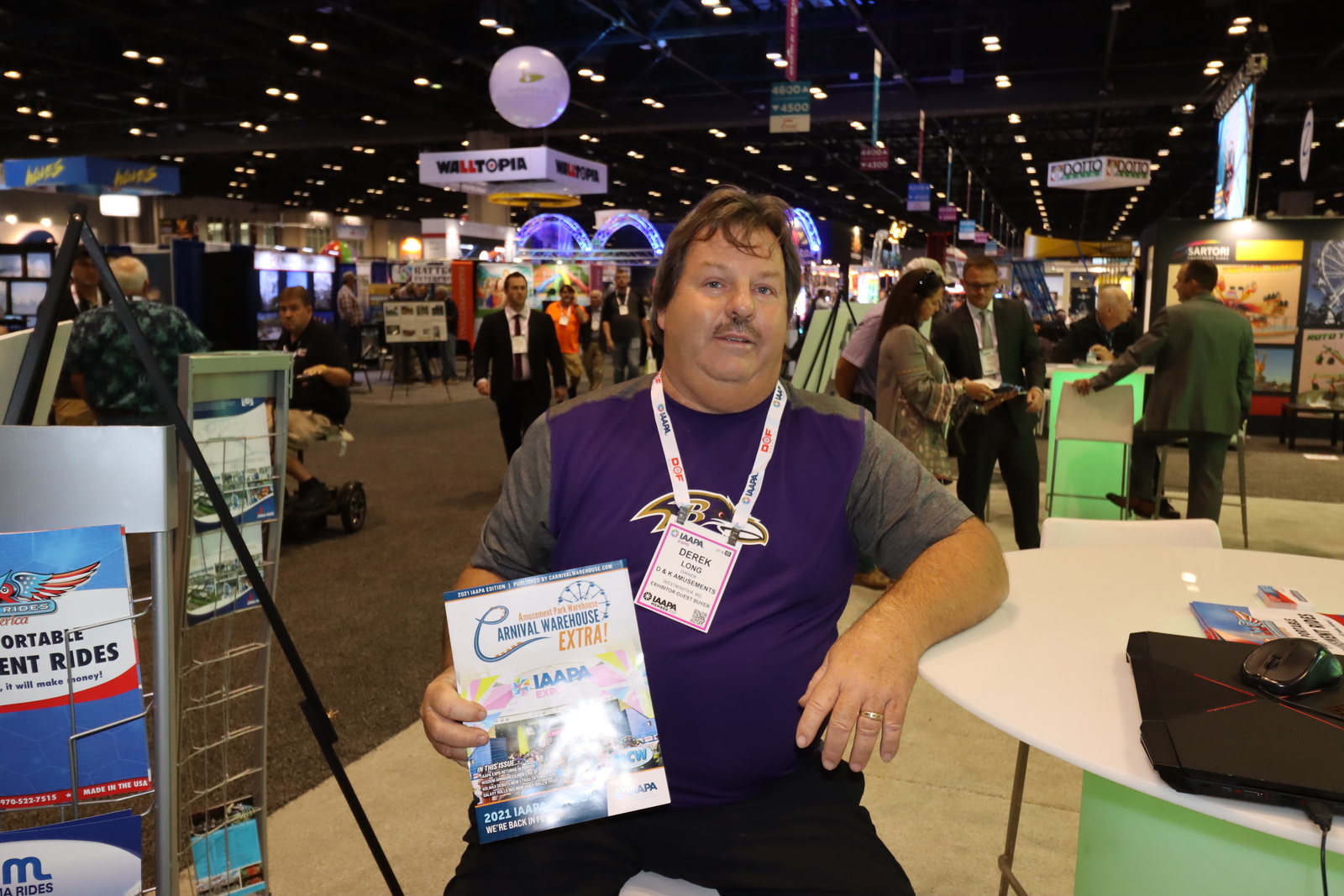 Derrick Long of D&K Amusements made a big career change in 2015.  After operating a family carnival for 30 years, traveling throughout MD, VA, WV and PA, he decided to call it quits.

At the IISA Trade Show in Gibsonton that next February, he heard Tom and Jeanne McDonagh were selling their Big Bamboo fun house and Long made a deal to purchase the attraction along with a route that included the Wisconsin State Fair, Minnesota State Fair and Texas State Fair.

Two years later, he made a deal to purchase another ride, a KMG Fun Factory, from fellow independent operator Nick Pelino.  The two attractions are operated at three state fairs each year.

D&K went from 30 employees, and dozens of events and moves each year to 6 employees and three events; Minnesota, Wisconsin and Texas.  Asked how he liked the transition, Long said he “Loved it”.  Although he was approved for H2B labor from South Africa before the Covid Pandemic, Long was unable to bring in the workers due to shutdowns.

With only three events, Long now has time to take on other projects and he has recently been taking on refurbishment work from other ride operators.  He has one reconditioning project at his shop now and he plans to take on more projects as his schedule allows. 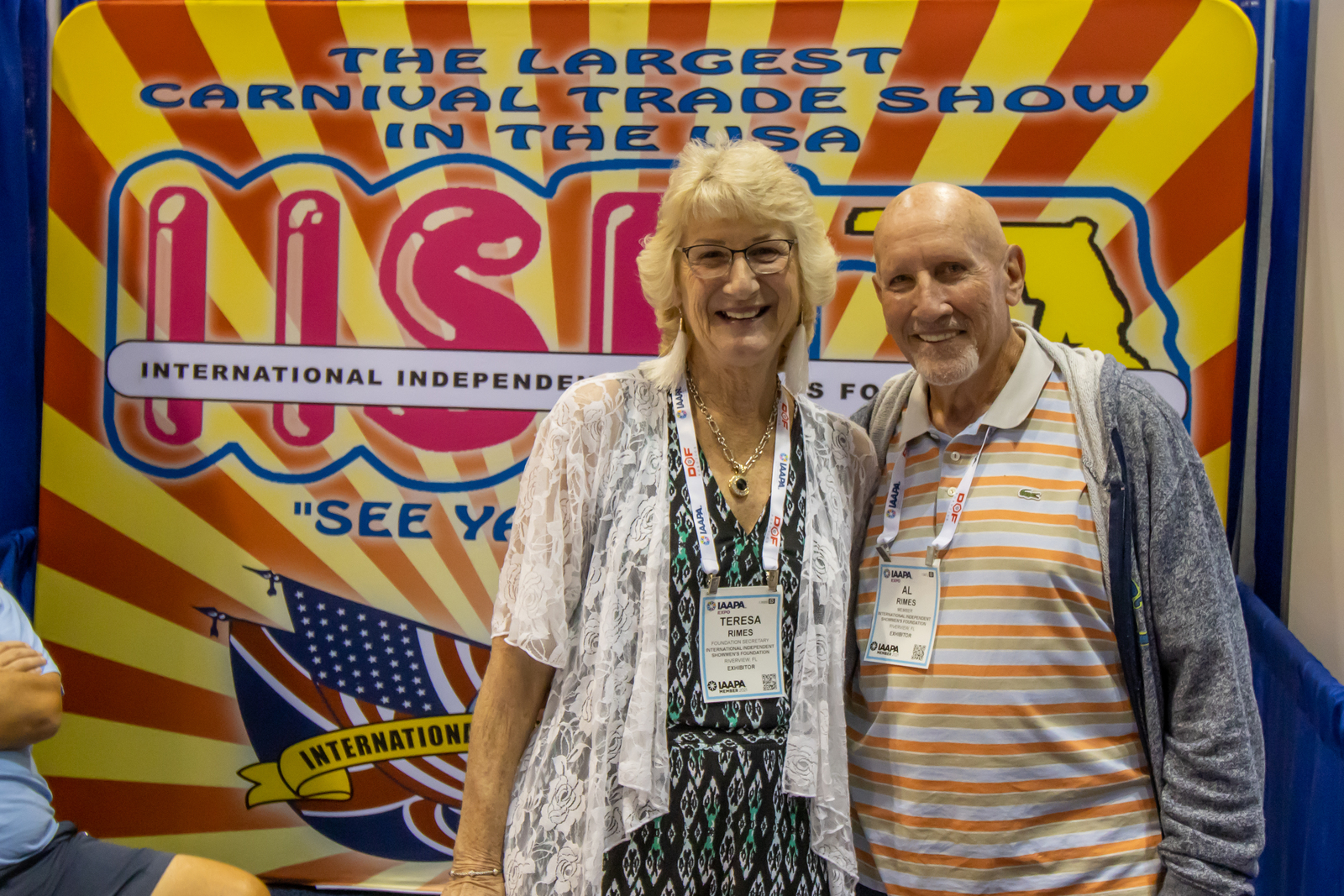 Teresa and Al Rimes were on hand representing the IISF Gibtown Trade Show.