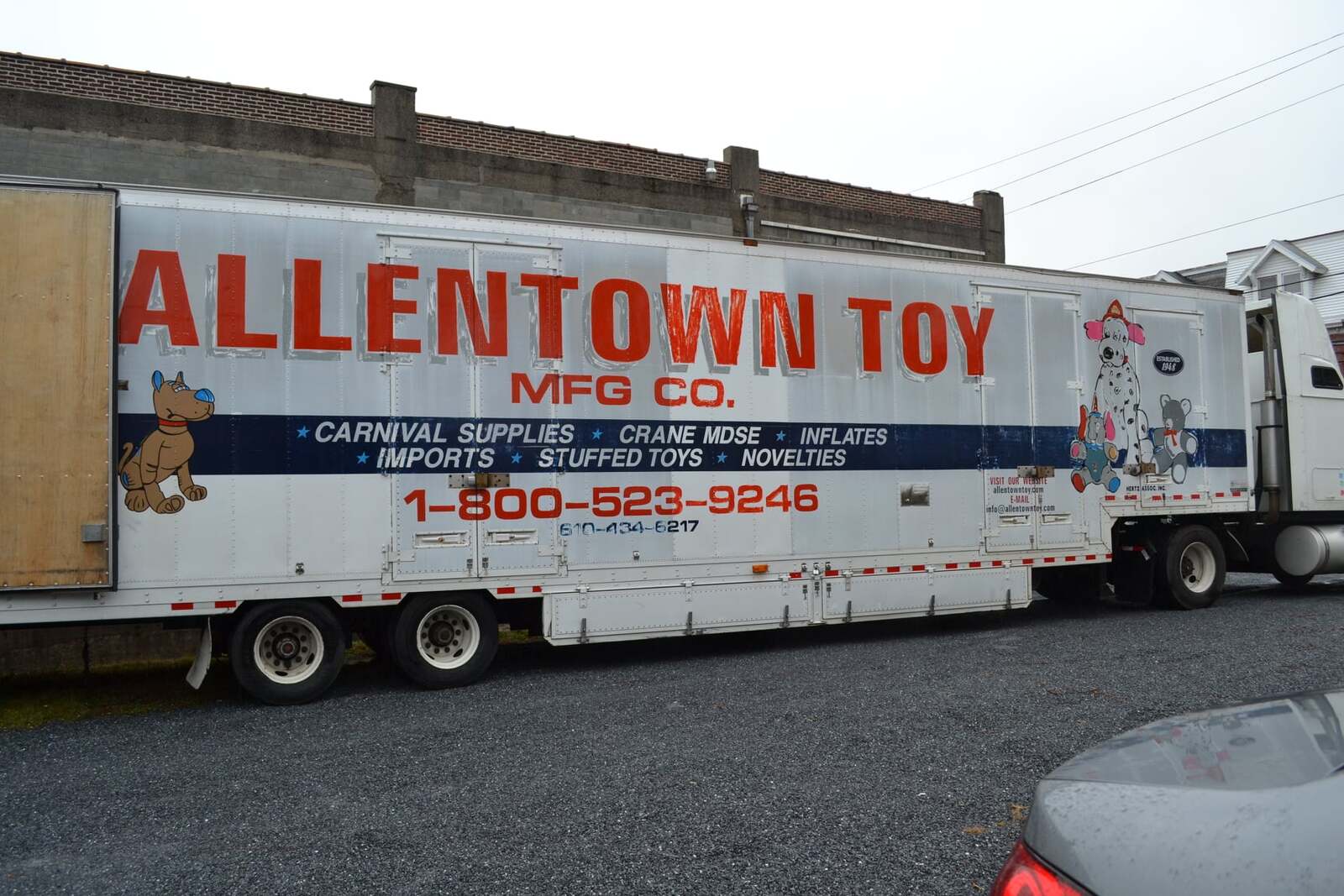 It seems the height of irony that at the peak of the Christmas, a toy company is shuttering.

But plush – the prizes for games of skill – come from toy companies that follow a different timeline than those made by mainstream toys – or elves in a North Pole workshop. Plush business follows the fair and outdoor event seasonal trajectory, starting and escalating from the first quarter onward, peaking in the summer and slowing down by the end of the 4th quarter.

For Allentown Toy Manufacturing, its warehouse was near empty of product by mid-December and by January, it will officially cease business operations. COVID – which shutdown the fair industry in 2020, then disrupted the global manufacturing and shipping industries through skyrocketing shipping costs, sporadic factory and port closures and severe and chronic unemployment – was a major factor in the decision, but was also a catalyst in the decision to retire.

“Before my father left the business and moved to Florida, he said if you ever want to liquidate, wait until the end of the season, because the storage would be emptier and you'd have less merchandise,” said Nancy Holman, President/Owner of what has been a mainstay of midway games for more than 70 years. “The timing was right.”

Soon after WWII Homan's father, Mortimer Hertz, who grew up working in his parent's toy business – R&R Toys – started the business by selling stuffed toys out of his station wagon in the Lehigh Valley.  Hertz named the company Gladys Supply Co. after his wife, the family's matriarch and co-founder of the business  who passed away in August (from Non-COVID causes); Mortimer Hertz died in 2014 – and besides founding one of the leading plush suppliers to midway game concessionaires, also founded the Pennsylvania Showmen League in 1967.

From the very start, the customer-base was what it remained – carnival concessionaires – downplaying other segments, such as amusements parks. “The parks on the Jersey Shore, they're only a four month a year business, we only had limited sales there, said Chris Sattig, who is Vice-President of Sales (although his business card reads: “Sales & Hobo Relations) who has been with the company since 2010. “The fairs were more year round.”

From January to November, Allentown Toy Manufacturing  went from Florida to New England,  and at times as far west as Ohio and even Iowa. The business grew from the trunk of Hertz's car, to the 20,000-square-foot warehouse which has been the company's headquarters for the past 55 years. Homan grew up in the business – her first job was at 12 counting money – and as a teenager and young adult, she worked for game concessionaires. In her twenties, she pursued a career in banking but by 1981 had returned to the family business. 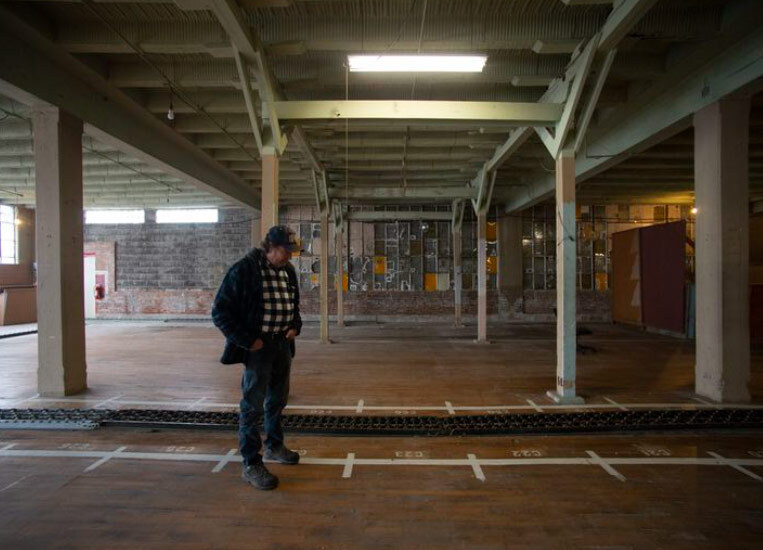 By then, with domestic factories closing, plush production went international.  “Importing from Korea and China, started in 1985,” said Homen. “Before then, the center of the plush industry was New York. That's where they were made.”

By the 1990s, with digitization and the global expansion of the internet, ordering was more streamlined, with only minimal travel. Into the 21st century, Allentown Toy Manufacturing carried a wide selection, riding waves of various pop-culture trends – from Cabbage Patch Dolls to Fidgets – always keeping a keen lookout for what is hot and when it's hot, judging the timespans of fads, careful not to overbuy and be left holding inventory of last year's hot-toy. “You buy stuff that can be a killer,” said Sattig. “A few years ago the fad was Fidget Spinners, and some companies went heavy into that. We didn't go crazy, it lasted one summer. Then you would see them being sold on every street corner in Philadelphia. We rode that crest, but you have to make the business decision on how much to buy.”

While occasionally handing brands from larger companies  -- many of whom have closed due to COVID said Homan – the company rarely carried the very expensive licensed products, such as stuffed characters from blockbuster movies, instead gaining a reputation for furry animals. “You can't go wrong with Teddy Bears. Certain plush animals, like plush birds or snakes, never go out of style.”

In addition to stuffed animals, the company carried lines of other plush toys as well as pet habitat cages – small plastic aquariums with goldfish, turtles and other reptiles. The company also sold a range of complementary concession essentials – water balloons, hooks, drapery etc.  The company's oldest and perhaps best known employee was Pete Johnson, who was with the company for 40 years.

? “He was our driver and everybody knew and loved him,”said Homan. “He delivered the plush orders, but the clips and the balloons and things he sold off the truck. People always had emergencies.”

Homan was contemplating retirement prior to the pandemic. The business was successful, but the plush market has become so competitive there was little interest to buy the name. “It put my four daughters through college,” she said. “But everybody knows where to buy plush, no one wanted to buy the name.”

COVID's upheaval paved a way for the Homen and Sattig to gracefully and professionally transition out of the business and enjoys their golden years. On March 13 2020 was when the U.S. went into lockdown, negatively impacting both the demand and supply side of plush-world. “All the carnivals and outdoor amusements shut down,” said Homen. “. We had a pretty full warehouse during the shutdown. Then as the country shut down, the international supply chain was disrupted. Everyone made day to day decisions.”

The orders the company had placed with overseas factories became chaotic. “We had shifted orders to factories in India, until things were put on hold for a while,” said Sattig. “India was getting the fabric from China, but then they couldn't get shipments from China. We arranged for the factories to get fabric from India, then India shutdown. Everything was pushed back.”

By January of 2021 – after eight stressful months – and retirement always on the table – Homen and Sattig (they're romantic partners) decided to close shop. Selling merchandise proved no problem. “Demand outpaced supply,” said Homen. “It started off slow, but in March and April sales were taking off at levels we had not seen for two, three years. By mid-July, we were at 50 percent. First we were shipping to shows, then shows came to us. It was fits and starts at the beginning of the year, but not by the summer.”

The company suddenly had more loyal customers than their record books indicated. “We tried to care of the people we knew,” said Sattig. “We were getting a lot of phone calls from people we never heard of. Everyone was looking for plush. Somebody would say, we buy from you all the time and then I would look them up and he hadn't bought from us in 10 years.”

Emotions may be mixed, but there's a sense of well-timed completion of a family-business that went from car-trunk to warehouse, spanned the globe but also brought joyful memories and fun-filled mementos for the hundreds of thousands of fairgoers who have played the midway games Allentown Toy Manufacturing serviced.

“I will miss the friendships we made,” said Homen. “This is a resilient industry and will come back. But we will be on the sidelines. We hope to visit people and the friends we made. I can also take a vacation in the summer for the first time in my life.”