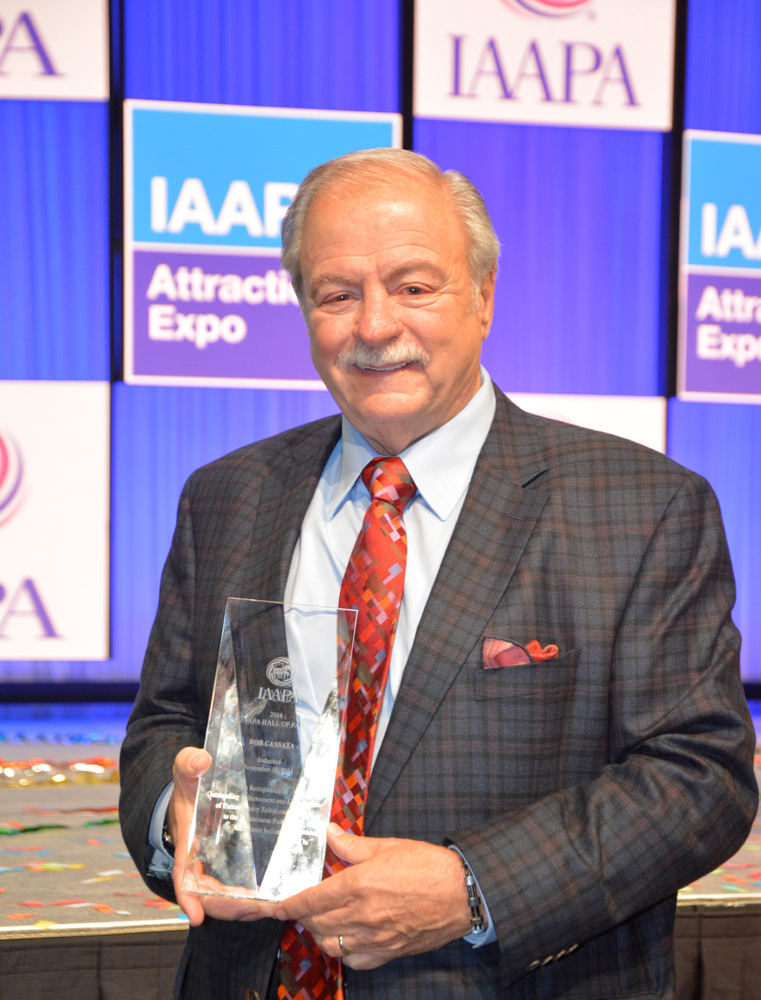 In a world where games can be played on nearly any phone, Bob's Space Racers (BSR) continues to prove not all games worth playing can be carried in your pocket. Not only is there value in the group experience of playing a game, but BSR's longevity has shown that games are a critical value-added component to midways in North America and around the world.

The company celebrates its 50th anniversary this year, and not only has the manufacturer essentially changed the way games are perceived by the fair and park-going public, but BSR has impacted the global entertainment culture. BSR may not have invented midway games, but the company, by redefining the midway game, has ensured their place at fairs and parks ranging from a modest weekend event in a parking lot to the largest amusement parks and fairs in the world..

“Every midway needs games, it's part of the fair experience,” said Larry Steele, Sales/Project Manager, BSR. “But everything is entertainment, whether it's video games, computer games, our games, there's a place for all of it.”

Bob Cassata founder of Bob's Space Racers, Inc., has come to be considered an industry icon and a legend, literally pioneering the way amusement games are played on the midway, theme parks, and arcades around the world.

But his entry into the business had inauspicious beginnings. While working as a carpenter for a construction company in the 1960s, a coworker who had a sideline running games asked Bob to manage a Daytona Beach boardwalk game concession during the summer, while he took games on the road for the summer fair season. One summer was enough to catch the games bug. Soon Bob started his own game concessions business and went on the fair route with his wife, Joyce. By 1967, Bob made his first games: Pitch-Till-You-Win and a 3-Pin Bowling game – which he constructed from an old burnt-out mobile home frame in his garage. With both games concessions and manufacturing now part of his purview, the genesis of BSR was in place.

In 1968, Bob and Joyce, while playing a fair route in the northern United States, met Jack Mendes through a family friend. Bob hired Jack, a college student at the time, to help with the games during the summer, then together they developed a new game concept –a trailer-mounted, race game with a science fiction motif. With this game however, players competed against each other. Group Games are now midway mainstays, but this contraption – where a player pressed a handle that threw a ball over a barrier and caused spaceships to race up a vertical track – is believed to be the first group game. The motif was inspired by the era's Apollo Space Mission – America's race to the moon! – and was christened Bob's Space Racer, which later became the company name.

Like its moniker suggests, the game took off. After being featured in Bob's summer fair concessions, other carnival operators saw the excitement the game injected to the midway, and its potential profits. They lined up to place orders for their own group games. The first Space Racers game was sold in 1970. Bob formed his company with Jack Mendes, soon moving out of his garage to a new BSR factory and they began to build games, ranging from water games and shooting games to a full range of custom-built games, which continues to be a company specialty.

By 1973, the company brought the midway game experience to theme parks – that year not only did BSR host its first booth at the annual trade show and convention of the International Association of Amusement Parks and Attractions (IAAPA) but a “Space Racer” trailer had its premier at Six Flags in Georgia. ?

Whack-A-Mole has become so commonly used a colloquium that many who use it are unaware that the term actually began its life as a BSR carnival game. At 50, BSR is one of the oldest game manufacturers in the amusement business today, and has customers in more than 100 countries, producing midway games, games, park games, trailer-mounted games, and game buildings for the amusement industry.

As demand for more group games grew, Bob ultimately purchased land and building space in Holly Hill, Florida – a suburb of Daytona Beach – to accommodate the manufacturing of games. This manufacturing plant now has a 15 acres campus with more than 100,000 square feet of manufacturing space and employs more than 90 technicians and other staff members.

In 2008, Bob retired from BSR, although he still monitors the company's endeavors. His accolades include induction into the IAAPA Hall of Fame; OABA Pioneer Award; and the IISF Hall of Fame Award. Today, BSR is run by Bob's daughter Glenda, who serves as CEO and his son-in-law Jack Cook serves as President. ?

Along the way, while technology has changed, some functionality of the way many of the same attributes that made BSR equipment so popular remain in vogue. “50 Years ago, our games were operated by a series of relays and complex electrical wiring; today, an entire game can be controlled by a handful of electronic boards,” said Steele. “Now we have computer boards, which can tell you exactly where the problem is. It's easier to trouble shoot.”

According to Steele, BSR is extremely hands-on when developing new games, a philosophy that dates back to its founder. Most companies have an engineering department to design a game and send plans to the manufacturing department. BSR utilizes a different approach: BSR not only designs and builds the game, they field-test each new game for viability, durability, and revenue generating ability. “Most new game concepts have already undergone extensive real-world testing before they are ever presented to our customers,” said Steele.

The newer models have more “lights and are brighter, but the look is the same. I think the big draw on the midway is that the games are nostalgic for the parents. They want their kids to play the same games that they did. We also see a trend towards more refurbishing, that's become a bigger business for us through the years. Our games are classic. With the trailer models, operators want to keep that look, so we are rebuilding a lot of the games that are 20 years old, they've lasted.”

Growth areas for the company are in amusement parks and Family Entertainment Centers, where attendant-free models have become in vogue. These self-service games have yet to catch on in a significant way for fairs, but the midway business remains a solid niche. BSR still has an operations division, which includes handling game concessions for NAME (North American Midway Entertainment).

Even after 50 years of growth and expansion into an array of different markets, the company remains committed to its carnival roots. “The game business is chugging along with carnival companies,” said Steele. “The plush has gotten better and it's funny but the plush tends to have regional trends, some items that are popular in one part of the country are not popular in others. Carnival Companies are still looking for games that increase revenue, it's very stable. It's been a good year for games because the economy is good. In bad times, people still come to the fair and will still ride rides, but when they cut their spending it's usually with the games. But when the economy is good like it is now, the game revenue always is higher. We've had one of the best years in our history.” 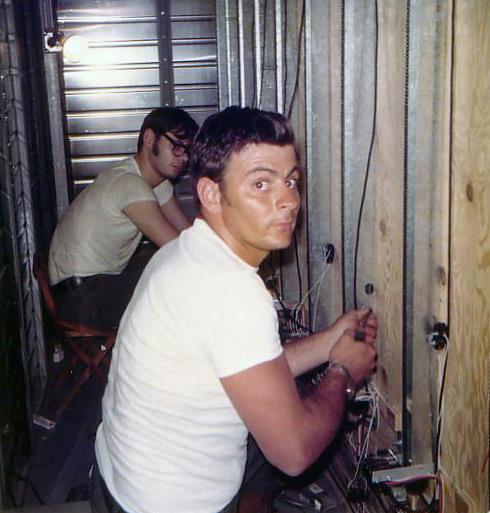 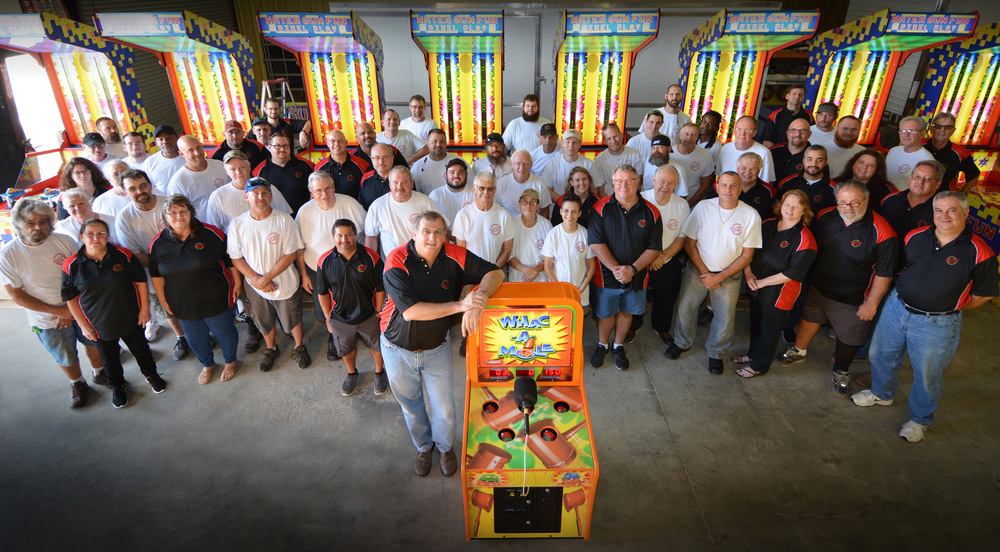 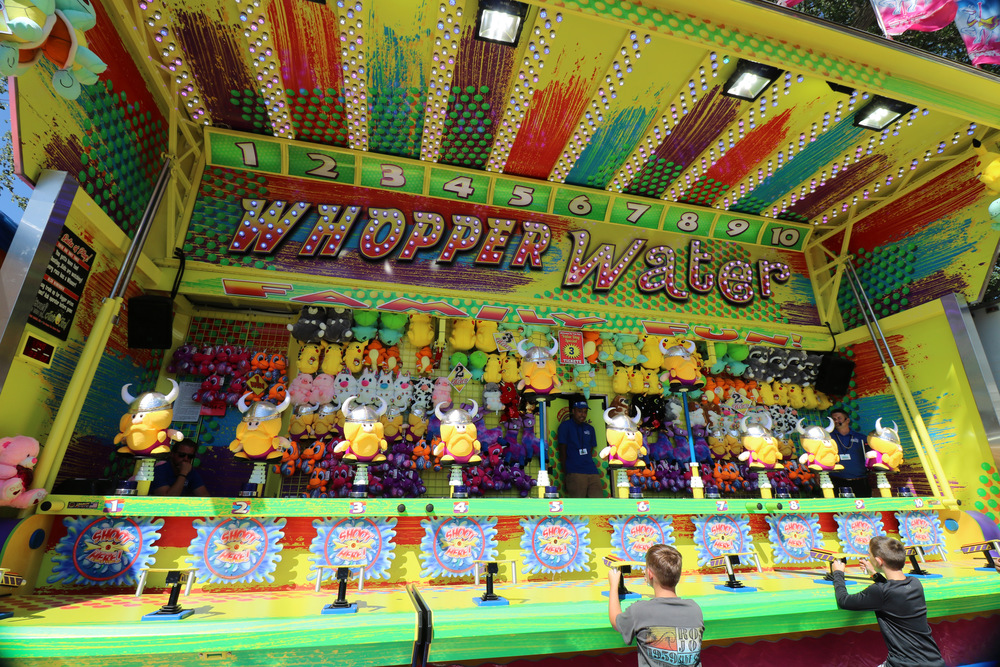 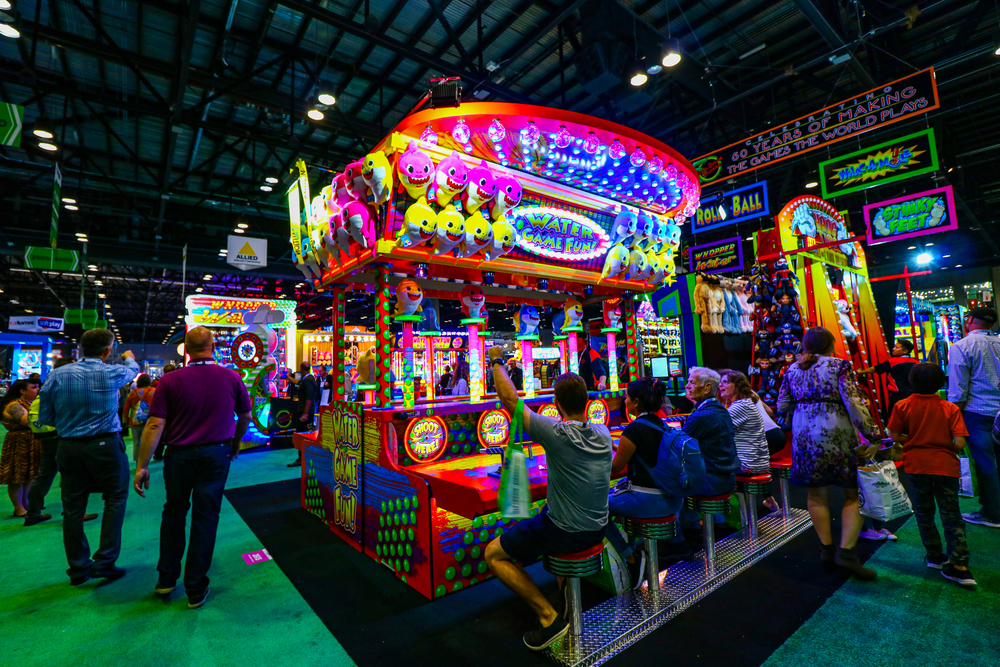 Bob & Jack working on a game trailer at an early age